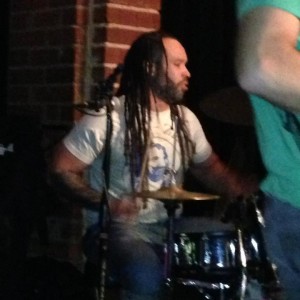 I'm a drummer and percussion player that plays with bands and also specializes in playing percussion with DJs. I play drumset, congas, timbales, bongo, pandiero, dumbek, and a host of other percussion. over 25 years of experience.

Be the first to review Names Thompson

It’s safe to say that most people who meet NAMES THOMPSON ask him for his name twice. Yes, his name really is Names, dubbed so by his father who had the foresight to give him a moniker unique enough to blaze into the hardline world of music with a befitting bang.

Born just 45 miles west of Motor City, USA, in Ann Arbor, Michigan, Names’s proclivity for drumming started early. His father was a Haitian conga player with roots in Port-au-Prince who had a penchant for belting out Latin and Haitian rhythms around the house. It thus came as no surprise to Names’s second-generation Scottish mother when at age 11, he crafted a drum kit out of his bedroom dresser and an assortment of her coffee pots. At first vexed but ultimately impressed by her son’s natural ability, she purchased for him his very own real drum kit, and it was a ’til-death-do-us-part merger. He began studying with Aaron Ted Carson, a family friend, and – inspired by such masters in the field as Giovanni Hidalgo, Alex Acuña, John Bonham, Jack DeJohnette, Horacio Hernandez, and Tony Williams – quickly learned the ropes, showcasing a raw knack for timing and technique.

Names’s first public appearances on drums were in 1983, both in church and with local bands in and around Ypsilanti, Michigan. The church performances were real holy roller affairs – Baptist services replete with full gospel choirs and hardcore raise-the-roof productions where music took the driver’s seat. Names got a crash course in putting on a show for a crowd (and managing a group – he eventually became band director) via those vigorous Sundays as well as with the rock acts around town.

In 1992, Names relocated to the Washington, DC, area, and soon started banging the drums for local musicians – this included a stint with David Roy of Wilson Pickett Band renown, the Christian rock group Audrey, and other acts in or near Annapolis, Maryland. He made his professional debut in 1997 with the Annapolis-based Latin-infused classic rock cover band Abraxas.

But there was no denying his roots.

Spurred by DC’s burgeoning Latin music scene, a yearning to expand his craft, and his familial soft spot for Latin rhythm, Names purchased sets of congas and timbales and started studying. He picked up the basics via video tutorials before slipping into the scene as an observer hellbent on winning over the master musicians whose fierce rhythms echoed nightly in DC’s Latin clubs and late-night venues. Once he’d won their trust, they agreed to teach him the tricks of the trade, and he subsequently was taken under the wings of many a prominent percussionist, among them Gail Sanchez, who toured with Santana; Larry Griffin from the band Mama Jama; Cubans Rafael Monteagudo and Bolo; Willie Vasquez from Puerto Rico; Panama’s Nelson Guapo; and DC luminaries Rene Ibañez and Alfredo Mojica, whose prowess in the field includes appearances with a jaw-dropping roster of legends such as Celia Cruz, Willie Colón, Buddy Rich, and Dizzy Gillespie.

Names also became a regular percussionist for DJs, picking up gigs all over the US, including a stint at Las Vegas’s renowned Rum Jungle. On the East Coast, he became a red-hot fixture for DJs Kerem Ulken and Chris Brooks at Red Maple in Baltimore; and in DC he kept the parties going alongside DJ Thomas Blondet at Eighteenth Street Lounge, and DJs Stingray and Sam Burns at The Park.

Names has toured with various bands and has consequently played in superb venues from sea to shining sea. He’s no stranger to the 9:30 Club or the State Theatre in Falls Church, Virginia, but he’s also made the rounds with See-I on their cross-country House of Blues tour and with Nayas on their tour of the San Francisco Bay area. He currently keeps time for the Baltimore-based ska/reggae/rocksteady band The Scotch Bonnets, who regularly tour with H.R. of DC’s own epic hardcore punk band Bad Brains.

Names has also taken to composing his own music these days and is hoping to work with a collaborator to release an album in 2015.