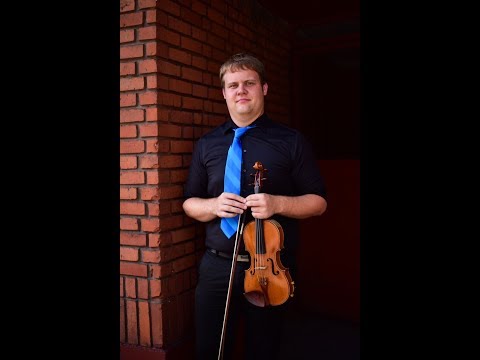 Are you looking for a violinist to add that extra charm to your event? I'm here to help! I've personally arranged and performed in dozens of events with a wide array of ensembles. While any musical tastes can be accommodated, acoustic classical music is my area of specialty. Message me today for a quote! I look forward to working with you.

Andrew did an absolutely amazing job for our small, 50 person wedding in the woods. He was extremely professional, communicative, and played all of the many (and odd) pieces that we requested. Will definitely recommend and use him for any future events we might have. :)

Response from Music for You!:

Thank you, Joanna! I thoroughly enjoyed working with you. Congratulations to you and your family!

Andrew did a wonderful job playing at my wedding! He arrived on time and played on for two hours, despite the heat & humidity in the barn where I held my wedding. Everyone who attended told me how great he was and how impressed they were with his playing, even friends who have also played semi-professionally. He also learned new fiddle music for my event, even though he typically plays more classical pieces. Andrew's music really added something special to my event.

We booked Andrew for our wedding ceremony and from the beginning he was easily accessible and more than accommodating. We already had a guitarist and he went above and beyond by coordinating music with him, despite having not met beforehand. He provided pre-ceremony music as well and canon in D and a few other classical pieces. His talent, if possible, was even better than his professionalism and we are still getting compliments. I am just waiting for our video so I can experience it all over again!

You can expect to work with an experienced, consummate professional from booking to performance. I have significant experience as a performer in a wide variety of settings including orchestral, string quartet, piano trio, soloist, and recitalist. I have also performed at a great number of weddings, dinners, gala's, and other events. Though I mainly specialize in Classical Music, other musical styles can explored as well!

Violinist Andrew Paa enjoys a varied career as an educator, performer, and arts advocate. A dedicated teacher, Andrew has worked with students privately and in music schools in South Dakota, Iowa, and Ohio. He maintains a private studio and previously taught at the Fairlawn and Hudson Schools of Music, and Firestone High School. His students have achieved a high degree of success, earning college scholarships and assuming leadership roles in their ensembles.

Andrew has performed across the United States and internationally in venues such as Cleveland's Playhouse Square and the Vienna Konzerthaus. Professionally, he performed, for three seasons, in the first violin section of the Sioux City Symphony. He has played with and assumed principle positions with several collegiate ensembles including the Luther College Symphony Orchestra, the University of South Dakota Symphony, the Kent State University Orchestra and the University of Akron Symphony Orchestra. Dedicated to performing chamber music, he previously founded several groups including the Cuyahoga String Quartet, Enigma String Quartet, the Rosen String Quartet, and several piano trios.

Andrew earned a MM in Chamber Music and Violin Performance from Kent State University where he studied with Cathy Meng Robinson (Miami String Quartet) and Jung-Min Amy Lee (Assistant Concertmaster with The Cleveland Orchestra). He studied chamber music with members of the Miami String Quartet and the Verve Chamber Players. Prior to Kent, he earned a MM in Violin Performance from the University of South Dakota studying violin with Dr. Eunho Kim and chamber music with members of the Rawlins Piano Trio. He earned his BA in Music from Luther College where he studied with Drs. Virginia Strauss and Jubal Fulks. Additional studies were undertaken with Frederick Halgedahl, Dan Auberbach and Maria Peters.

Classical Music from Bach to Beethoven to John Williams.