Back to Dame Edna Impersonators 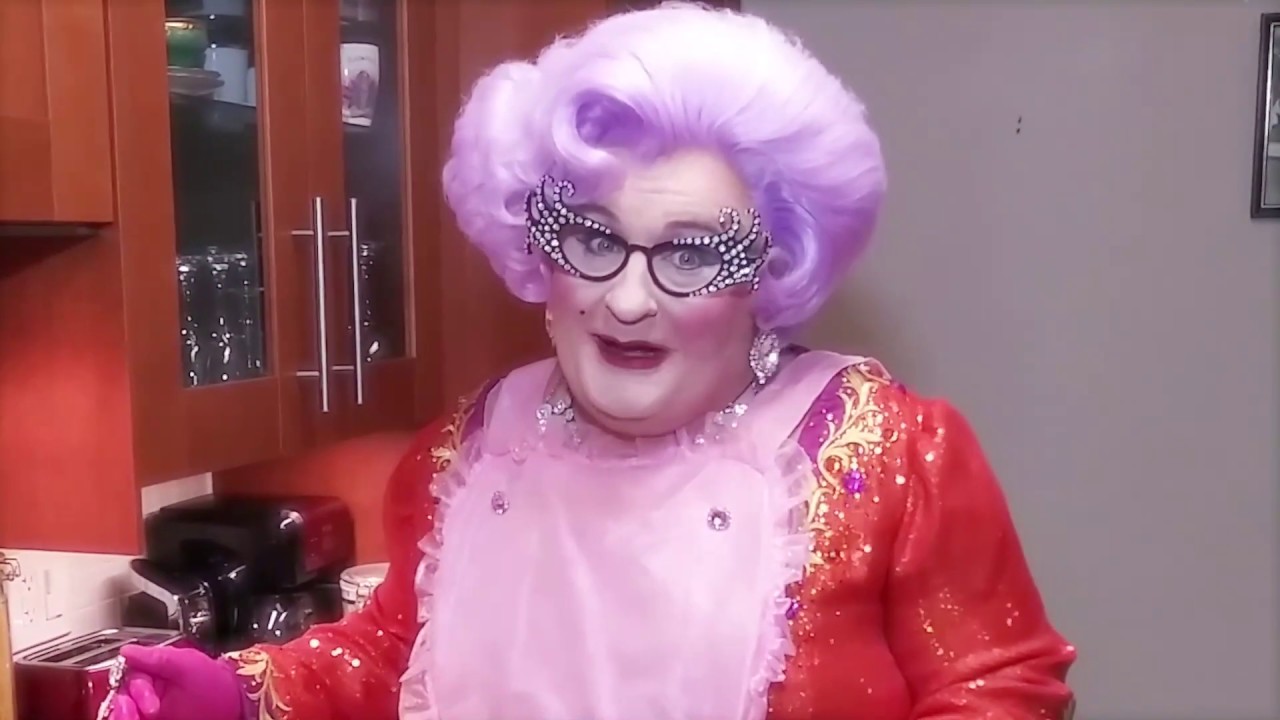 "Edna" on the radio! 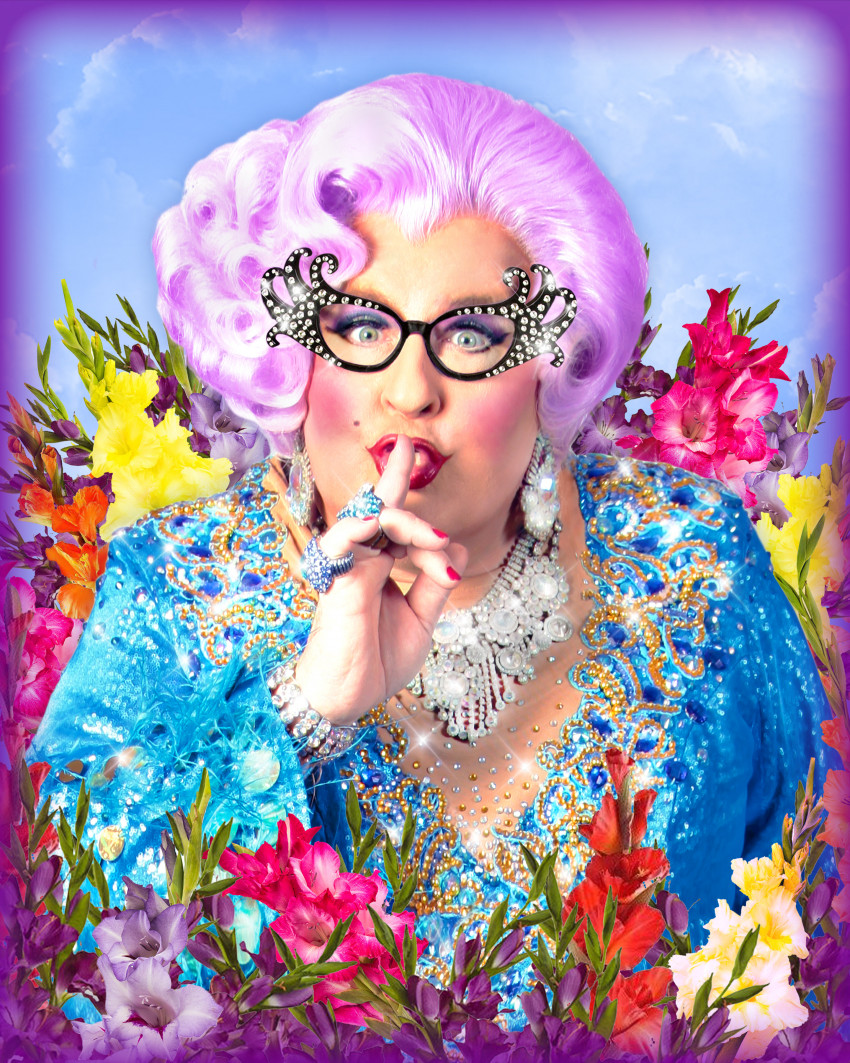 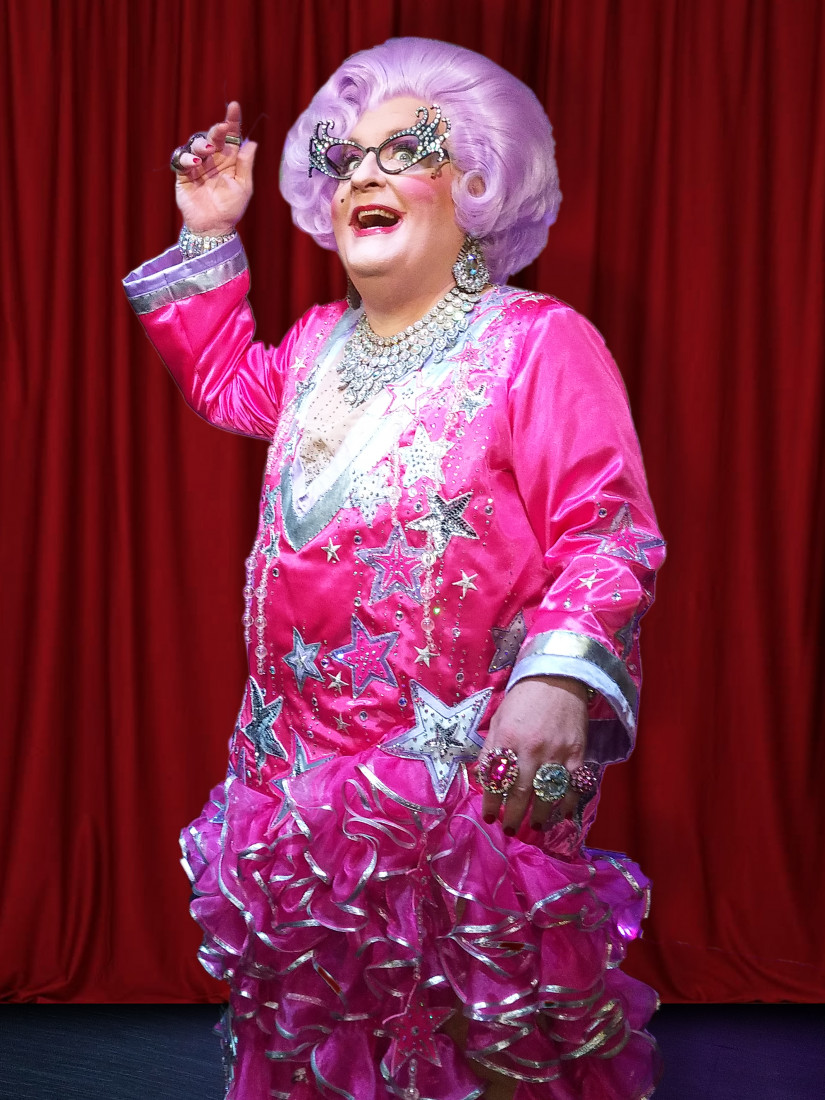 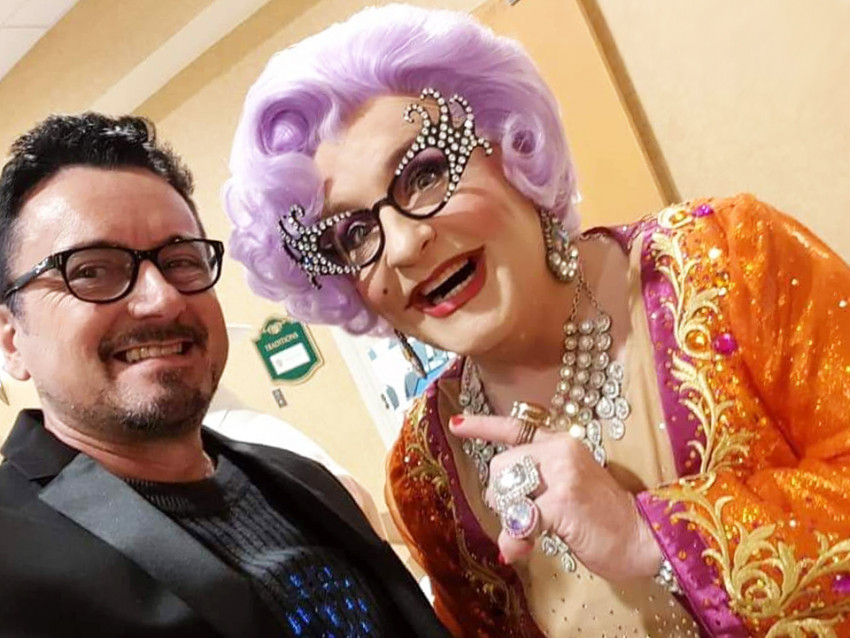 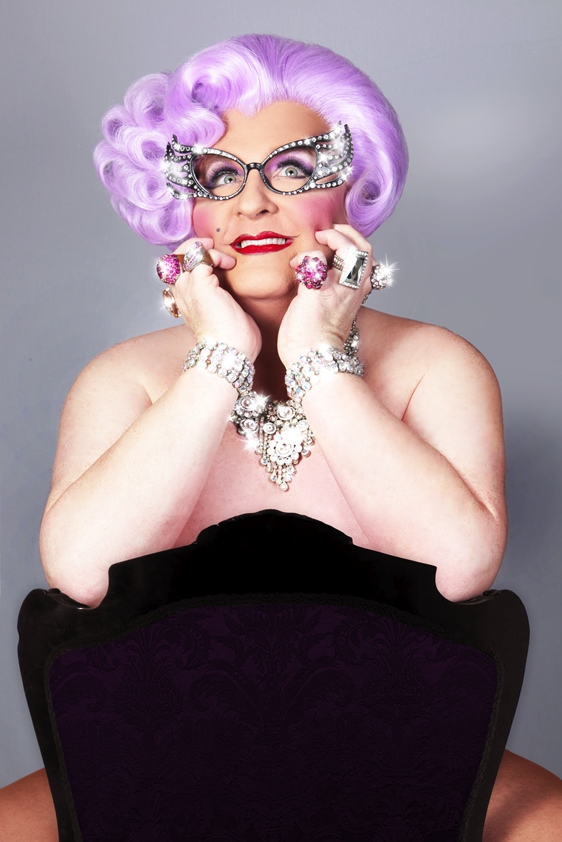 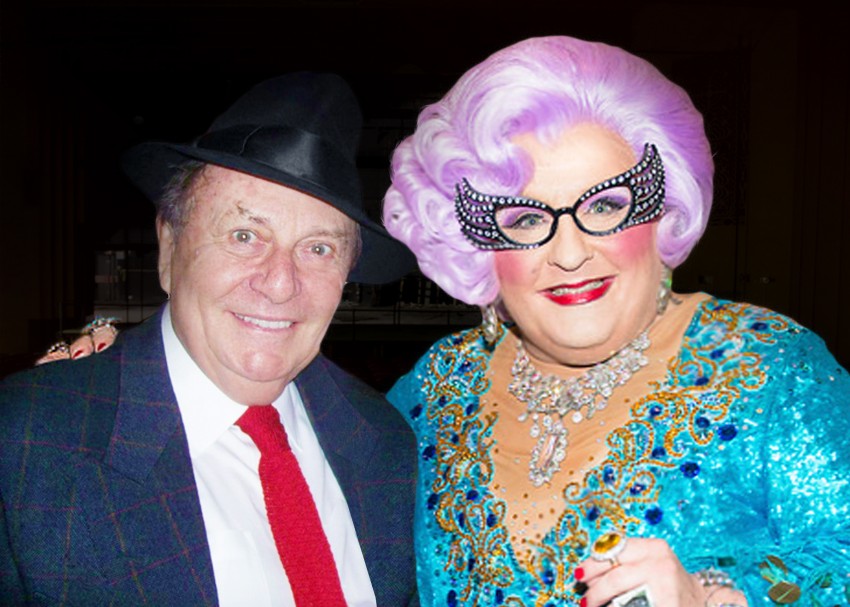 Michael with Barry Humphries, the creator of Dame Edna 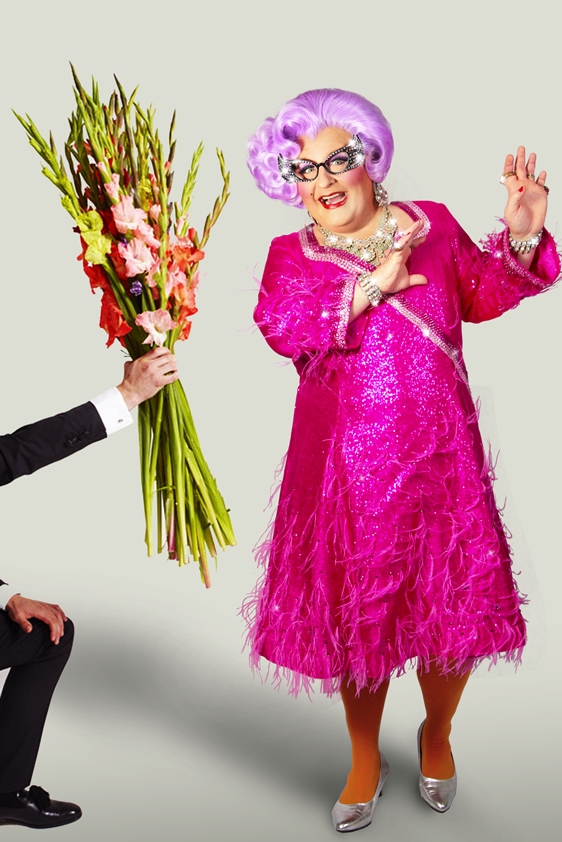 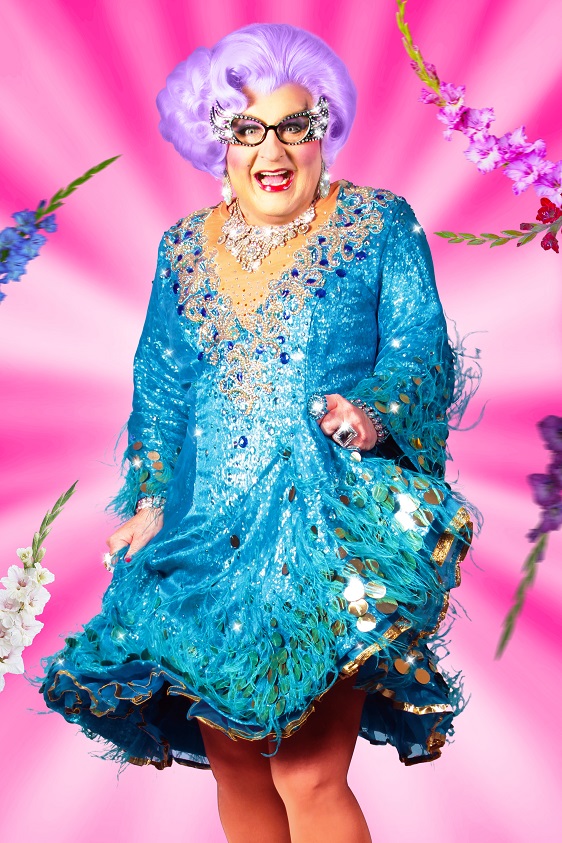 Michael Walters is the world's longest-running and most fabulous Dame Edna impersonator.

As a critically-acclaimed actor and vocalist, Michael brings unparalleled quality and authenticity to his hilarious portrayal of The Diva from Down Under!

Michael is honored to have been called "SPECTACULAR!" by Dame Edna's manager/creator Barry Humphries.

...and critics are raving too!

"Those familiar with the Dame Edna character found it hard to believe that Walters was not the original. The entire image - wisteria-colored hair, rhinestone specs, heavy make-up, and flamboyant clothes copied from the originals - is meticulously reproduced."

Michael L. Walters as Dame Edna performed for our group, the National Gay Pilots Association, last weekend at our annual event in Ft. Lauderdale, Fla. From booking/contract signing to the end of the show, the process was fantastic. Michael and Doug are very professional and easy to work with, and the show itself couldn't have been better. It was nearly all (or at least seemed) custom-tailored to our crowd, and the audience reacted to it accordingly. More than one hour of nonstop laughter, with a standing ovation at the end. What a great night!

Michael Walters as Dame Edna is Dead On.

Michael Walters Dame Edna show is the real deal. From the colourful enchanting frocks, perfect makeup and hair ( he looks exactly like the Dame herself) to his perfect impersonation skills. Quick witted. Adjust the show to the surroundings. A laugh a minute. I saw 3 shows and all where different depending on the audience. A true pro. Our club is in mexico www.elpianiorojo.com and a unique experience for any performer and Micheal made it seem effortless. Lovely to work with and his show is simple to produce. He made it easy for us all. People are still talking about his appearnce months later and we will have him back. This show and man is a 10 in all ways.

Had there been aisles (instead of tables), we'd have been
rolling in them. Everyone had a terrific time, thanks to Michael
Walter. A "Must See".

He Brought the House Down!

Michael was a total joy to work with and as professional as they come. From setup to sound check to working the crowd post show he couldn't have been a better entertainer. A real "no-drama" kind of guy!

In the end - the proof is in the performance. Michael has a superior ability to read and work the crowd, know just who to play and how far to go. His wit is razor sharp and his vocals brought the house down. We want Michael back in Saratoga in 2012!

And I'll be there with bells on! What a pleasure and a joy!

The Highlight of our first pride event!

I booked Michael Walters to perform his show "A Royal Audience as Dame Edna" as the finale to our gay pride event here on the Outer Banks of North Carolina. The show was hilarious, witty and classy! The moment Michael Walters stepped on stage the laughs were nonstop! Michael is a comic wonder and an outstanding singing voice! Only 2 days after his performance and we have already booked him for next years pride! I have lived in Key West and Provincetown and Michael Walters is by far one of the best!

We had never seen any version of Dame Edna before and had a wonderful time. The show was funny, biting and a tad delightfully naughty. Absolutely loved the spontaneity of the show and the interaction with the audience.

"I'm not usually a fan of tribute shows, in which one performer impersonates and recreates the act of a more famous star.
But I may have to make an exception for Michael Walters, who does a canny impersonation of Dame Edna Everage in his funny one-man (or is that one-woman) show, "A Royal Audience with Dame Edna Starring Michael Walters," at the Golden Apple Dinner Theatre through Sunday.

There's a lot of impersonating going on here, because Dame Edna is actually the cross-dressing creation of Australian actor Barry Humphries, who has played her for more than 50 years, turning Edna from an average housewife into a glittery, mauve-haired, international megastar.

...Walters makes you believe he is Dame Edna, from the glittery dresses and huge eyeglasses to the screechy, accented voice and curling lip that seems to snarl in reaction to audience comments.

She talks about her celebrity friends and her strange relations with her three children, sings a bit and tries to help audience members with their problems.

Those audience interactions distinguish Walters from other celebrity impersonators, who can spend an evening just telling jokes or singing songs in the style of the original.

But Dame Edna's shows are always filled with improvisational elements built on interviews with audience members. That is where Walters excels with a quick wit, even if he sometimes spends too much time with people trying to be funny themselves...Walters always keeps the laughs coming."

"The closest thing to enjoying Dame Edna Everage’s outrageous comedy on Broadway is to laugh ‘til you cry over Michael L. Walters’ Dame Edna...In the second half, Dame Edna uses actual questions from you -- no canned come-ons or predictable answers. But clever ones. Walters makes you confident s/he has heard it all. Yet, being in a new context, everything’s fresh... Feathery and in flaming red sequins, the purple-haired Royal Dame enters radiating charm as well as abundant rhinestone blazes. Despite her warm glow toward her “possums” (audience), she doesn’t lack discipline... No wonder Michael L. Walters is approved by Barry Humphries, creator of Dame Edna Everage, to portray her."

Review by Ken B.

As the President of the Southeast Regional Gay Men's Health Summit, it was my great pleasure and delight to have Dame Edna be our MC to almost 500 Health Summit participants from all over the US with several other entertainers. We were all laughing and really enjoyed the show she put on. We would like to have her back next year when we have it in Atlanta!

Price Range: Varies depending upon event type and duration.

Unions: AEA (Union Has No Bearing On This Impersonation)

"Edna" is the perfect complement to a wide range of venues and occasions! Walters is a world-class stage veteran and can accommodate your needs like a pro! Both Michael and his assistant will work with you before and during the event to ensure the best possible experience.

Michael Walters is the world's longest-running and most fabulous Dame Edna impersonator.

As a critically-acclaimed actor and vocalist, Michael brings unparalleled quality and authenticity to his hilarious portrayal of The Diva from Down Under!

Michael is honored to have been called "SPECTACULAR!" by Dame Edna's manager/creator Barry Humphries.

...and critics are raving too!

"Those familiar with the Dame Edna character found it hard to believe that Walters was not the original. The entire image - wisteria-colored hair, rhinestone specs, heavy make-up, and flamboyant clothes copied from the originals - is meticulously reproduced."

"The Dame" is available for social occasions AND full performances of his award-winning stage show, a tribute to Dame Edna's fabulous Broadway extravaganzas. Event planners and theatrical producers alike have been thrilled to work with Michael again and again for private events as well as performances of his critically acclaimed stage show.

Please contact us for a performance rider/ tech list. Very little is required for "Meet and Greet" bookings.

Dame Edna Everage! Who else?

No technical specs for meet/greets.

(A microphone/ sound system is required for performance bookings.)