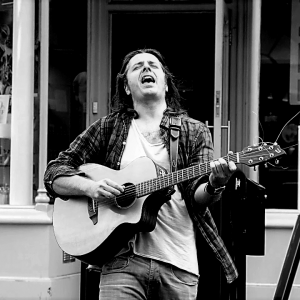 Matt Lee is a pop/folk singer-songwriter, best known for his hit song "Johnny" and his appearance on BBC 2 Dragons Den in 2018.

Be the first to review Matt Lee

Matt Lee is a singer songwriter from England. He has recorded over 20 songs mostly in Berlin where he lived for two years.
One of the tracks "Beautiful Thing". was his first song and it received airplay on BBC radio in the UK. The song is about a girl he met in London that inspired him to pursue a music career.
Inspired by life in Berlin, Matt wrote many songs there which were recorded at a studio in Neukolln, working through the freezing Berlin winter.
With over 2 albums of original material to hand, Matt started performing frequently in 2012. Since then he has been touring in France, Germany, Spain and London.
In 2015, his song "Chasing Rainbows" received airplay on Amazing Radio.