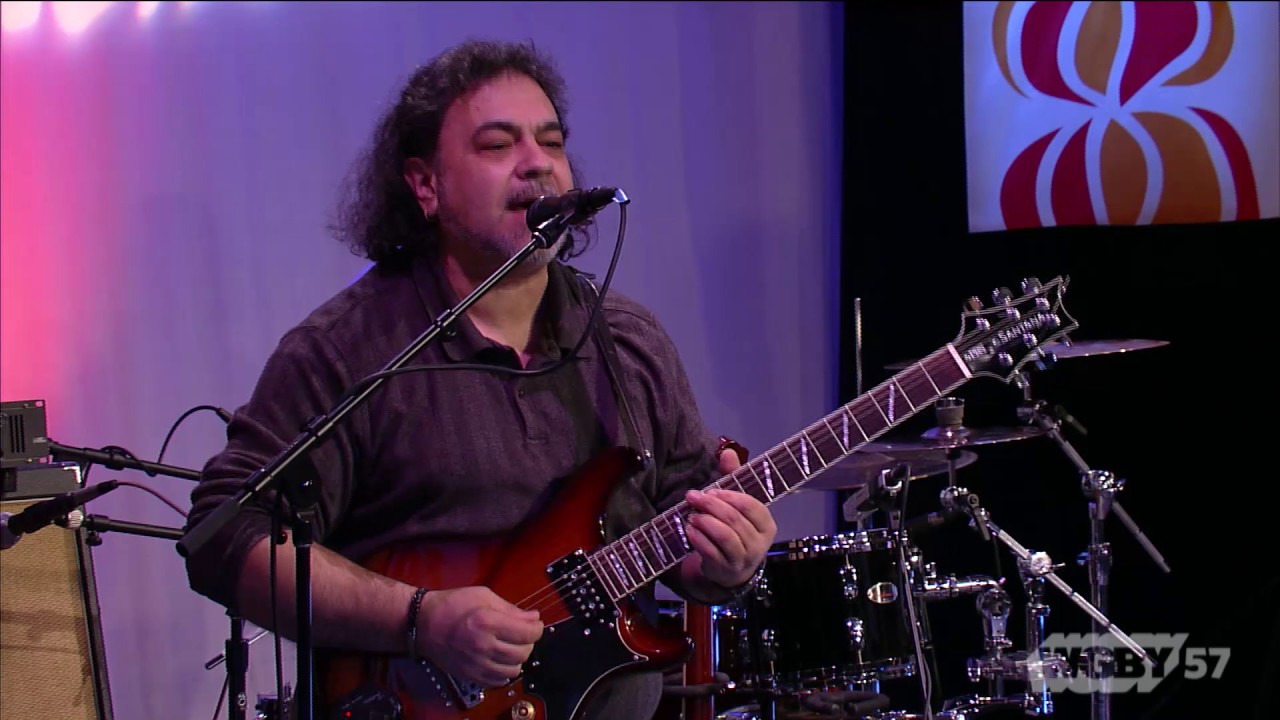 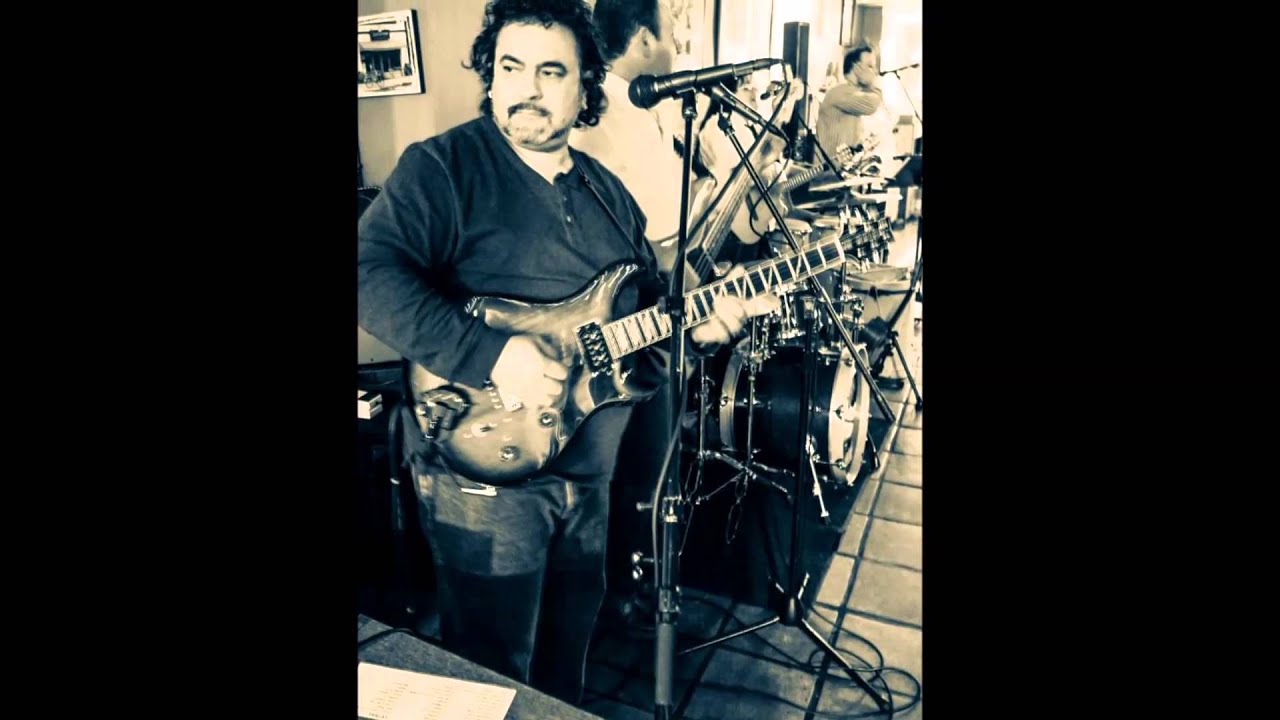 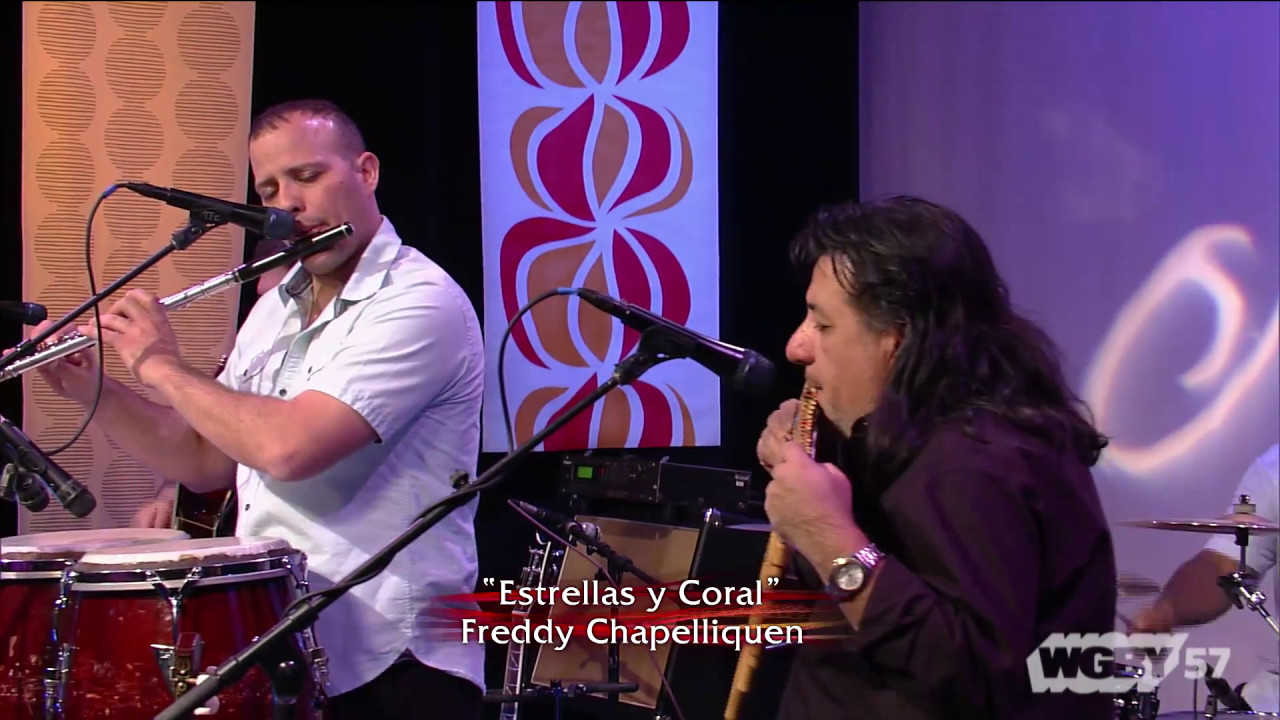 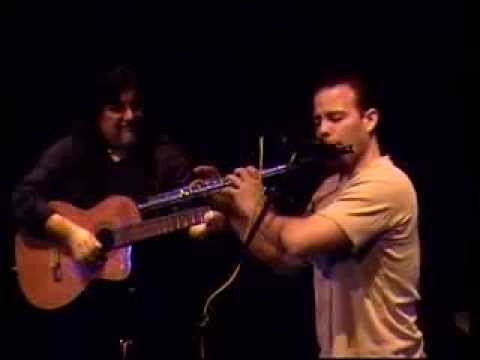 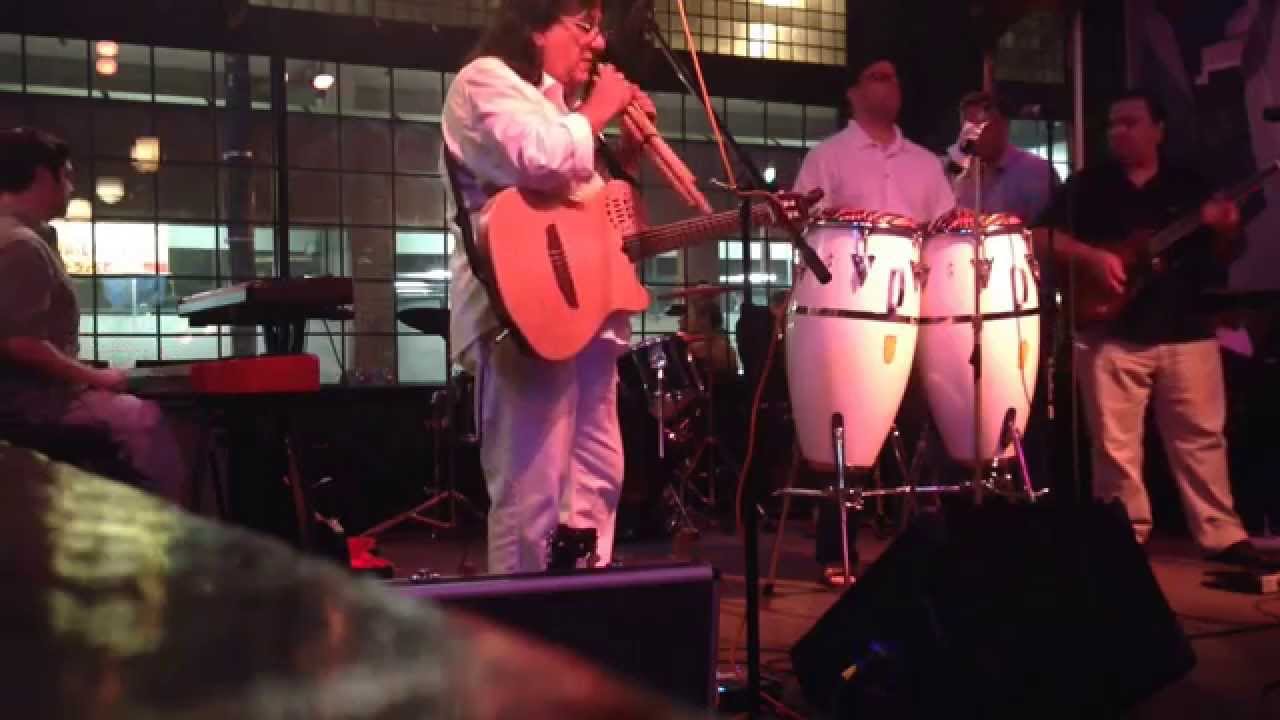 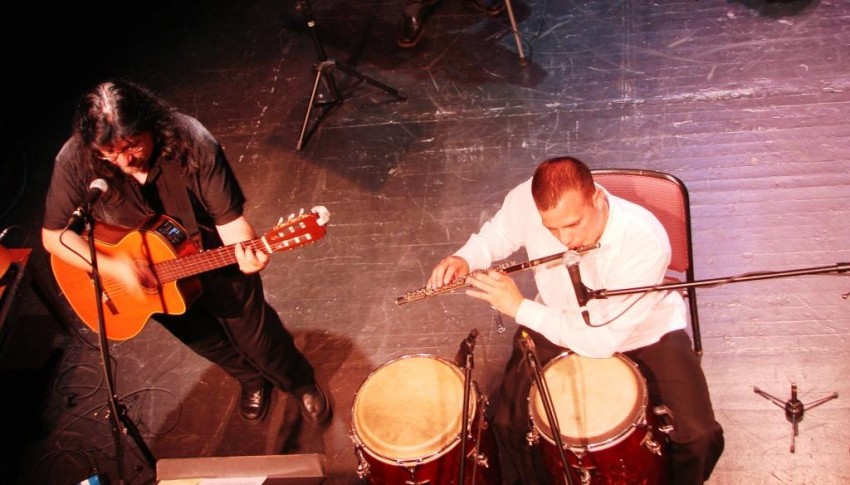 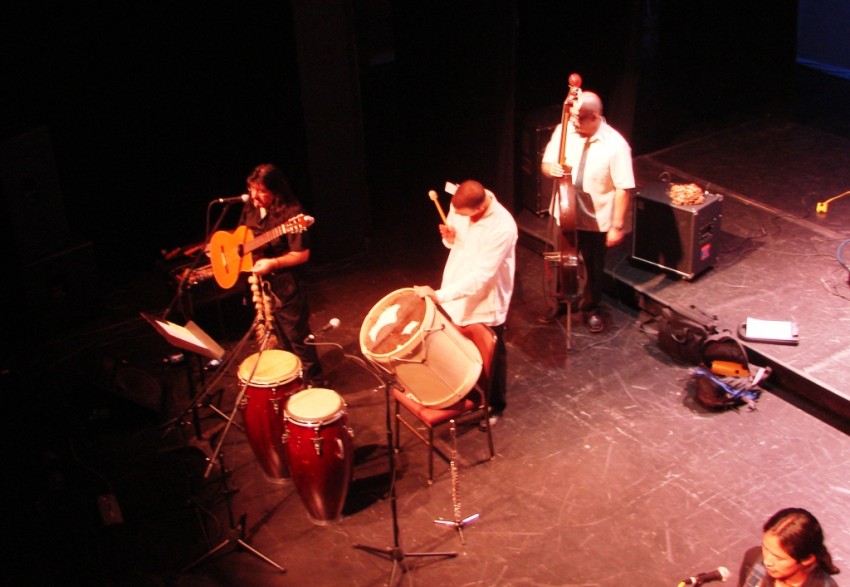 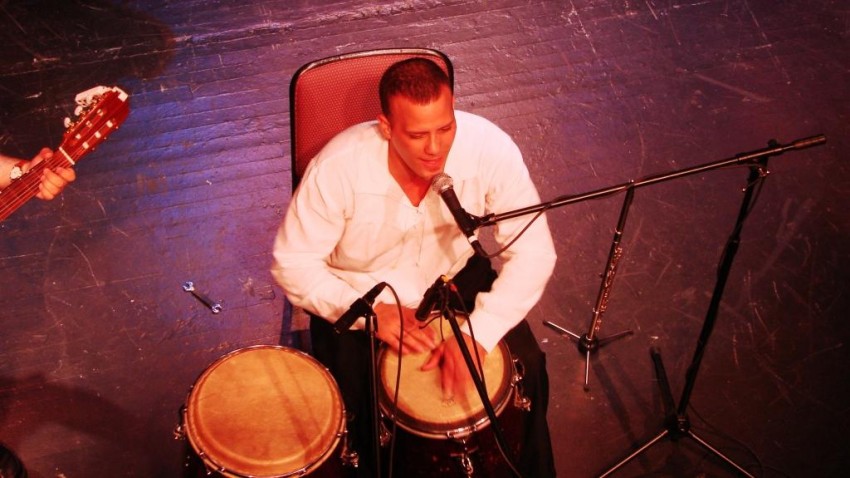 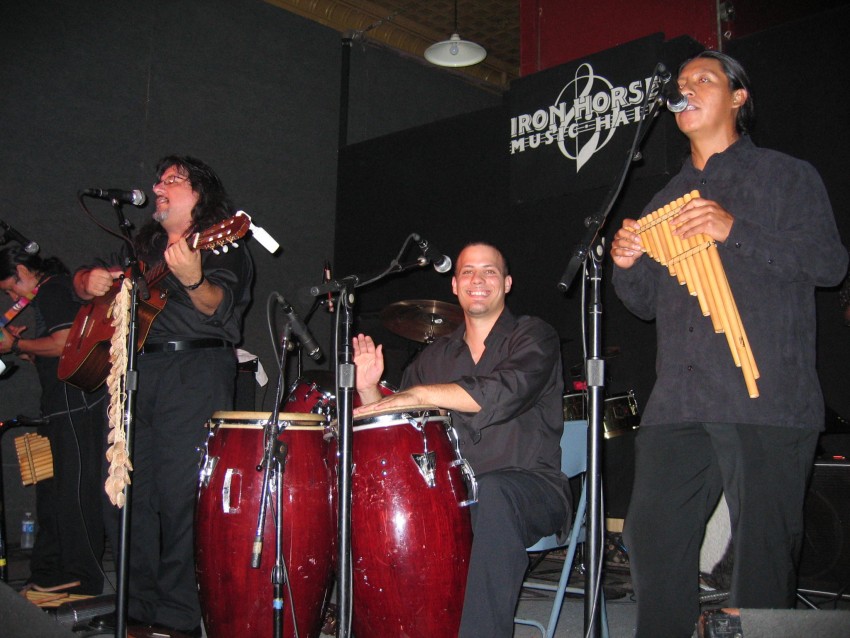 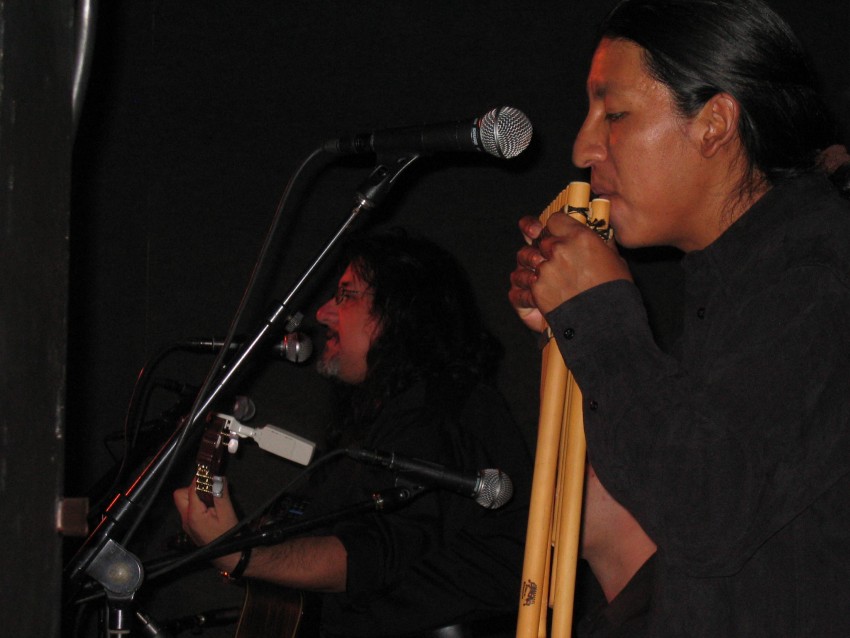 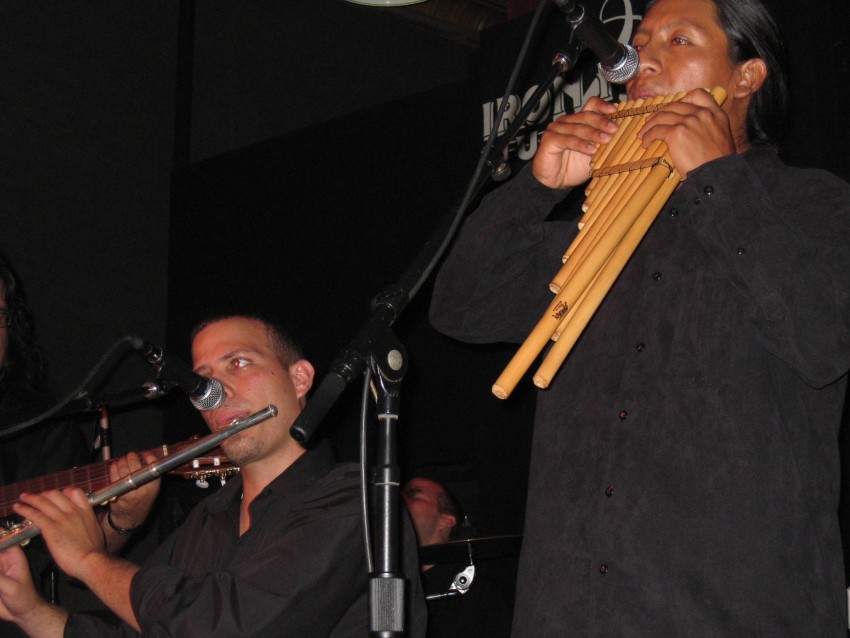 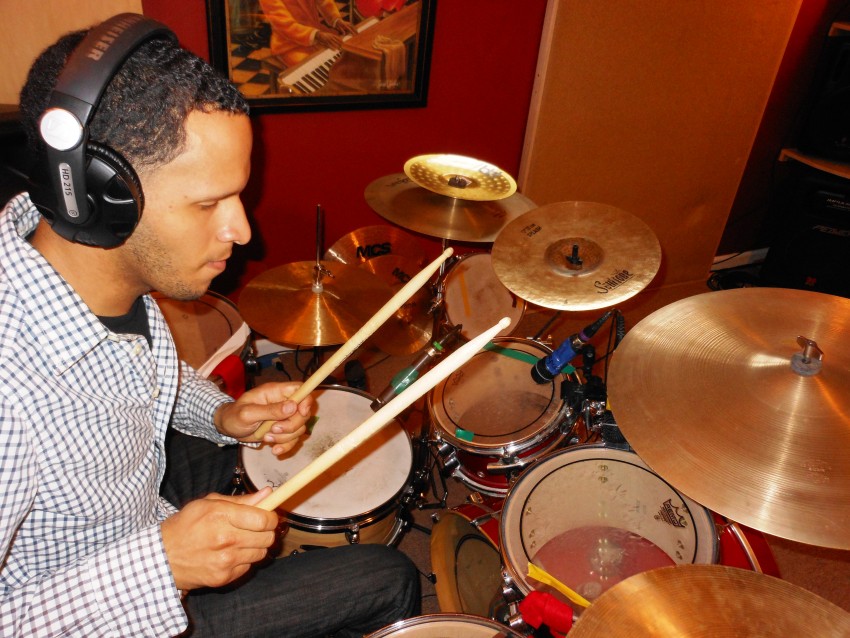 Cesar @ the recording of Unspoken Union 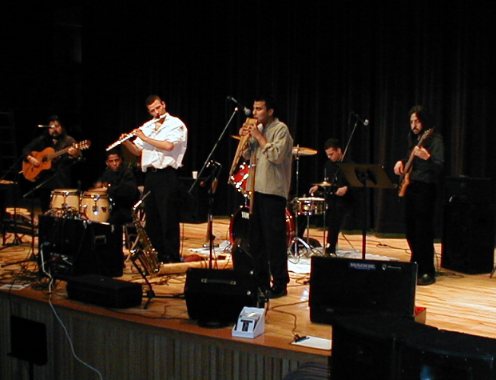 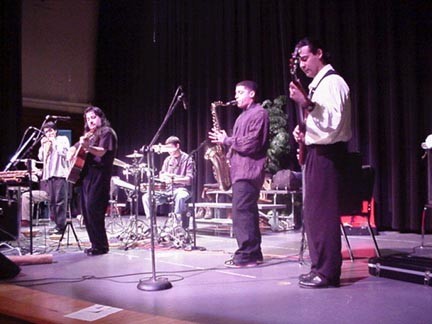 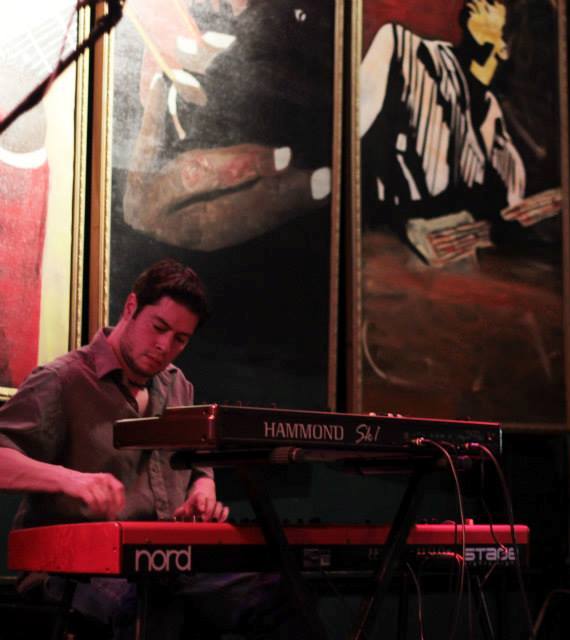 Marka's ensemble name means "People" in Quechua (the most widely native spoken language of the Americas). Since 1999 they have performed nationally and internationally at a large variety of events from the Kennedy Center to festivals, museums, Universities, weddings, corporate events, churches, schools, Nightclubs and feature presentations in PBS and WGBY. Marka is formed by individuals from seven countries in the Americas to better represent the musical wealth of Latin America.
Marka performs a collection of songs that can be high energy or soothing in order to showcase the emotion, raw power and flare of Latin American music in a fascinating amalgam of instruments, rhythms and lyrics.

We had Marka perform at my wife's 40th birthday party last night and people raved about the music. We had some latinos at the party but most were "gringos" and they/we all really enjoyed the band and the music. They played both authentic latino styles of music but also recognizable more pop songs. It was a great variety. We would highly recommend them and the next time we need a band, it'll be Marka!

Awesome performance for a school assembly!

Marka not only performed great music, but also provided an array of instruments for kids to learn about! Reviews from faculty were very positive!

Marka played at my birthday party for hours! They did a great job communicating with me prior to the event. There were six people playing multiple instruments skillfully. For the price, that was amazing! One of the band members got everyone dancing. They looked like they were having a blast. Everyone commented on the high-quality music and asked where I found them. They played multiple styles of music: bachata, Samba, cumbia, merengue, Classic rock, and pop. What a night!

Dear Sara, thanks so much for your super kind words. Your party was awesome! And we loved playing for you.

MarKa’s musical purpose is not only to entertain but to culturally enrich audiences. By reminding us that America is larger than the United States: that America, in fact, extends from Alaska to the southernmost tip of Chile. The members of MarKa also feel that the diverse cultures of the Americas— tied by history and geography, but separated by politics and language—can effectively be reconciled by the sharing (indeed, by the merging) of their many musical expressions. MarKa’s musicians: one Peruvian, two Puerto Ricans, one Uruguayan, One Costa Rican and a North American represent the potential of this harmonious exchange. The group has played its unique repertoire at international-music festivals, educational events in schools, museums, and cultural institutions; and in folk, jazz and world beat clubs all across the Eastern United States.

Since its inception in 1999, As a Peruvian and Andean folk music quintet, MarKa embraced the responsibility that an ethnic artist must have to its own people, history and music. Freddy Chapelliquen , MarKa's founder, with the help of brothers Ahmed and Rene Gonzalez and brothers Ryan and Marlon Bazan, decided to emphasize the musical and social contributions of the four major cultural influences that had shaped the modern, folk and traditional South and Latin American music they were so accustomed to hearing: the indigenous, the West African, the Euro-Iberian, and the United States. Traditional rhythms and music forms from these diverse cultures had slowly fused over the centuries, creating that which is today's Latin American traditional, folk and popular musics. MarKa's careful choice of repertoire and instrumentation was then to reveal this historic evolution to its audiences. In the mid 2000's the members started to considered the possibility of taking their music to a more eclectic, encompassing and experimental realm in order to replicate what was occurring in the music world in Latin America at the time.

The ensemble was then headquartered in western Massachusetts. Between Amherst and Springfield to be more precise. In 2005 they became a seven piece group and included many more western influenced instruments and rhythms. Deeply moving at times or full of fresh and ancient energy at others, MarKa's music called out to rekindle the senses of our human collective memory while trying to carry the audience across a panorama of musical history millennia: From the delicate sounds of Quechua and Aymara bamboo flute melodies to very high energy Caribbean numbers. Western-European wind instruments, African influenced instruments, and jazz drums also found its way into their music complementing the bamboo flutes and diminutive Indian guitars of the folkloric musicians in marvelous, if sometimes off-beat ways.
Since then, MarKamusic's repertoire has emerged as a combination of many themes: mainly their own music, but also reinterpretations of ancient Inca, Aymara and Quechua aboriginal melodies; songs arising from the nineteenth-century South American struggle for independence; the rarely heard treasures and sometimes jarring and hypnotic Afro-South American music such as the Música Negroide of Peru or the Candombe music from Uruguay; of Latin folk-rock protest music-banned in the mid 1970s under pain of death by the military Juntas; and a handful of favorite Latin-American torch songs and high-energy pop tunes-the kind you might hear blaring out of jukeboxes in small-town luncheonettes and bars in say, Peru or Colombia. The sum of it all is that chairs are often empty or kicked over at the end of the performance and everyone is up on their feet, prancing or kicking about like crazy or taking part in a madcap, coiling conga-line.

Marka does not require special lighting, though these can enrich the effect of our presentations or your event, celebration or party. However we do require a stage not smaller than 18 feet wide by 10 feet deep. That is because each of us plays three instruments or more.
Depending on the size of your event we may need a Public Address system which we will discuss with you later. Plus we can also offer DJing services for in between our breaks. 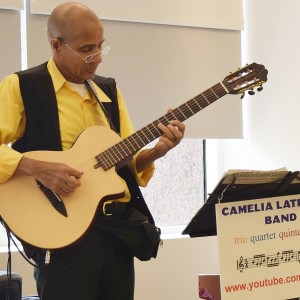 Kevin C. said “The band was absolutely amazing would 100 percent book them again!!!!” 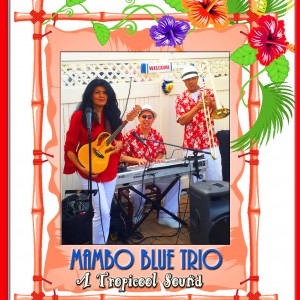 Gordon said “The Mambo Blue Latin Band provided a most delightful musical experience for our team member holiday luncheon. They are very professional and accomadating.…” 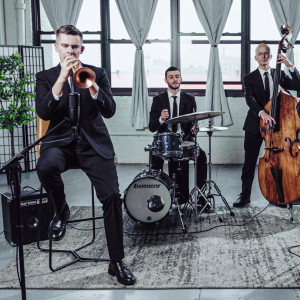 Dierdre P. said “I was a little uncertain about using Gig Salad initially, as I had never heard of it before. But it was one of the best decisions I could have made. The…”

Gaby said “We had a great time at our corporate event!”