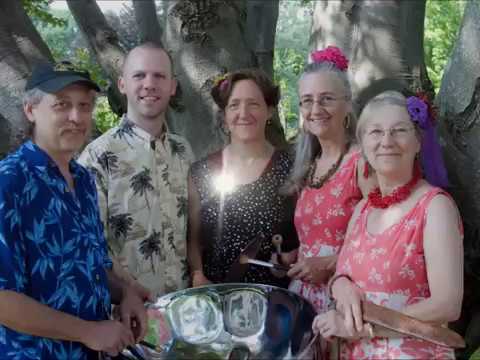 The sweet and vigorous sound of steel pan music appeals to a wide variety of audiences, and all age groups.

Our pan ensemble consists of a full range of steel pans — lead pan, alto pans, guitar pans and bass pans — to which we add a conventional drum set and an array of traditional percussion instruments. The result is a full, rich sound with the infectious rhythm that only a steel band can create.

Be the first to review Mango Groove Steel Band

Our pan ensemble consists of a full range of steel pans — lead pan, alto pans, guitar pans and bass pans — to which we add a conventional drum set and an array of traditional percussion instruments. The result is a full, rich sound with the infectious rhythm that only a steel band can create. We always play a variety of dance music— calypso, reggae, jazz, motown, and more—all with a true Caribbean flavor.

Our performances and workshops include Afro-Caribbean drumming and dance, and the audience is always invited to "jump up" ... learn the dances, do the Limbo, join in with the fun.

A new world of rhythm,
melody and movement ... all part of the Mango Groove experience!

Mango Groove has been building a reputation as an excellent dance and party band, playing the authentic calypso and soca music from Trinidad and Tobago, as well as reggae, motown, jazz and more. The uplifting sound of the steel drums appeals to all generations and will have everyone moving, whether you’re 8 months old or 80 years young.
When this band performs you are not only treated to a unique sound, but members of the band engage the audience with performances of Afro-Caribbean dance. Do not be surprised if they ask you to get up to learn some steps and perform with them - there may even be a limbo contest!

Mango Groove is based in Conway New Hampshire, and most of its members live in or near the Mt. Washington Valley. Band director Eric Rollnick plays lead, or soprano “pan”. “Pan” is the actual name of the instrument, however they are made from steel drums. The other members include Candace Maher on seconds, or alto pans - two pans of high register that often complement the melody or play harmonies, Janet Kucera on guitar pans - two pans of lower pitch that extend to play parts a rhythm guitar would play, Cathy Shea on bass pans, which consist of six full size steel drums, and percussionist Eric Donnely as the “engine room” on set drums.

Eric Rollnick has not only assembled these musicians and arranged the music; he has also built most of the pans played by Mango Groove as well as played by the community steel band, Steel Dreams, which he directs as a faculty member of the Mt. Top Music Center in Conway.
“At first I tried to teach myself how to build pans, and that didn’t work out too well. My wife, Janet, said, ‘ if you want to learn to do this we should go to where they were first created: Trinidad and Tobago.’” That was in 1989, and they have returned to the islands every year since, usually during Carnival, when musical celebrations and steel band competitions reach a finale. Now Eric sells his pans as well as some imported from Trinidad under the name Maccabee Panworks and at his retail musical instrument store in Conway, Ajaja Music, and on the web at (link hidden) .

“The band started out as a trio in 1992 ,” explains Rollnick “So we had basses, guitar and lead pans. As I built more pans I looked for players and the band quickly grew to its present configuration.” More recently Mango Groove has earned the Editor’s Pick Award in the Best of New Hampshire edition of The New Hampshire Magazine.
Rollnick has a talent for writing, arranging and selecting tunes that make the most of this diverse and talented group. His composition “Dancing Toucans,” in particular, captures the feel of the islands in a fresh and original melody that, like so many Mango Groove tunes, makes moving to the dance floor irresistible. Four original tunes along with eight other titles are found on their CD “Flavor”, which is available at gigs or through Ajaja Music.

Mango Groove is obviously going places, and as their fan base spreads, they have been playing gigs farther from their north country home. But where is the band going in musical terms? “We are being asked to play in more concert settings, so it is a matter of expanding our repertoire into more areas of jazz and even classical music to complement our party music.” says Rollnick. “Steel bands were originally formed to play at carnival, carnival parties, and street parades for people to dance to. But as the instrument gains legitimacy it’s potential in other musical forms is being experimented with. Pans are the newest acoustic instrument to be invented and provide room for all kinds of musical expression.” So come catch The Groove, dance to the Caribbean beat or sit back, close your eyes and listen for the tropical breeze in the palm trees.