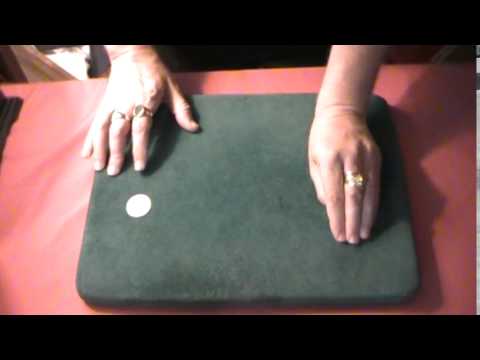 Coin Trick from our close-up Show 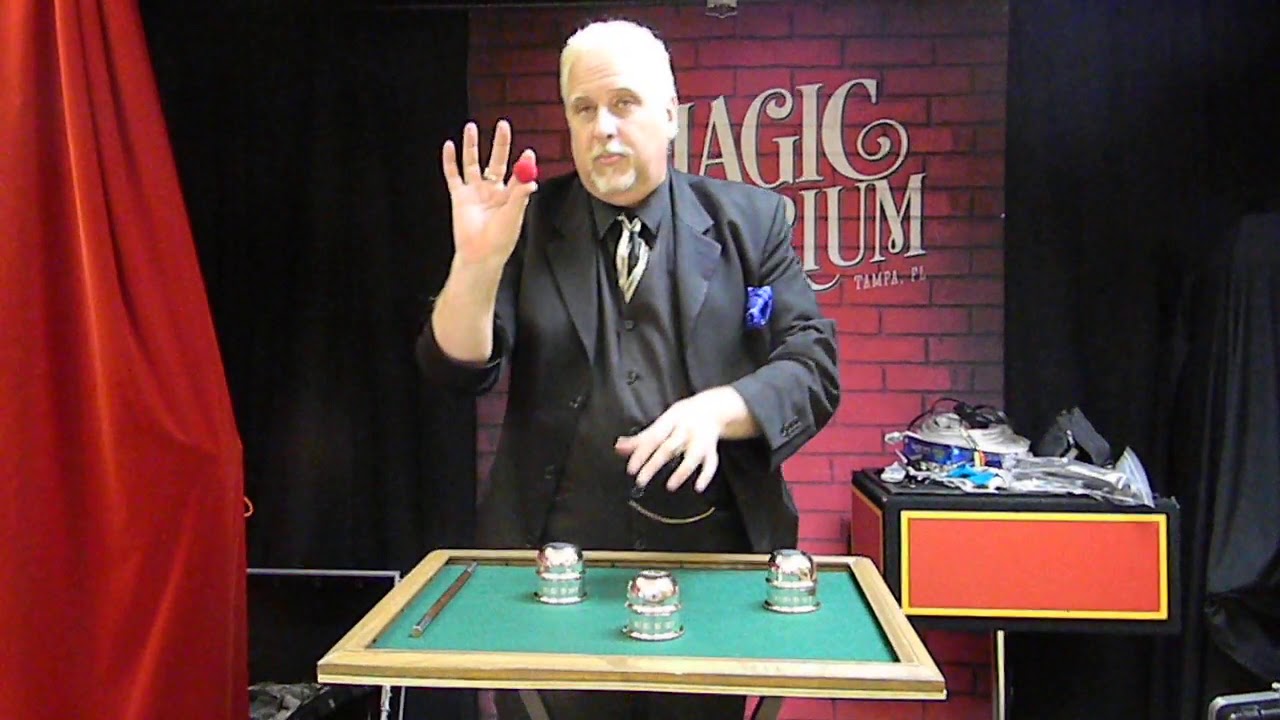 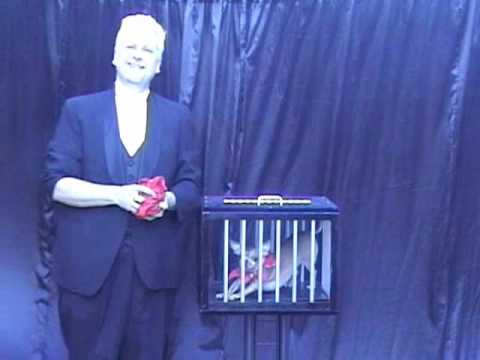 From our stage shows. 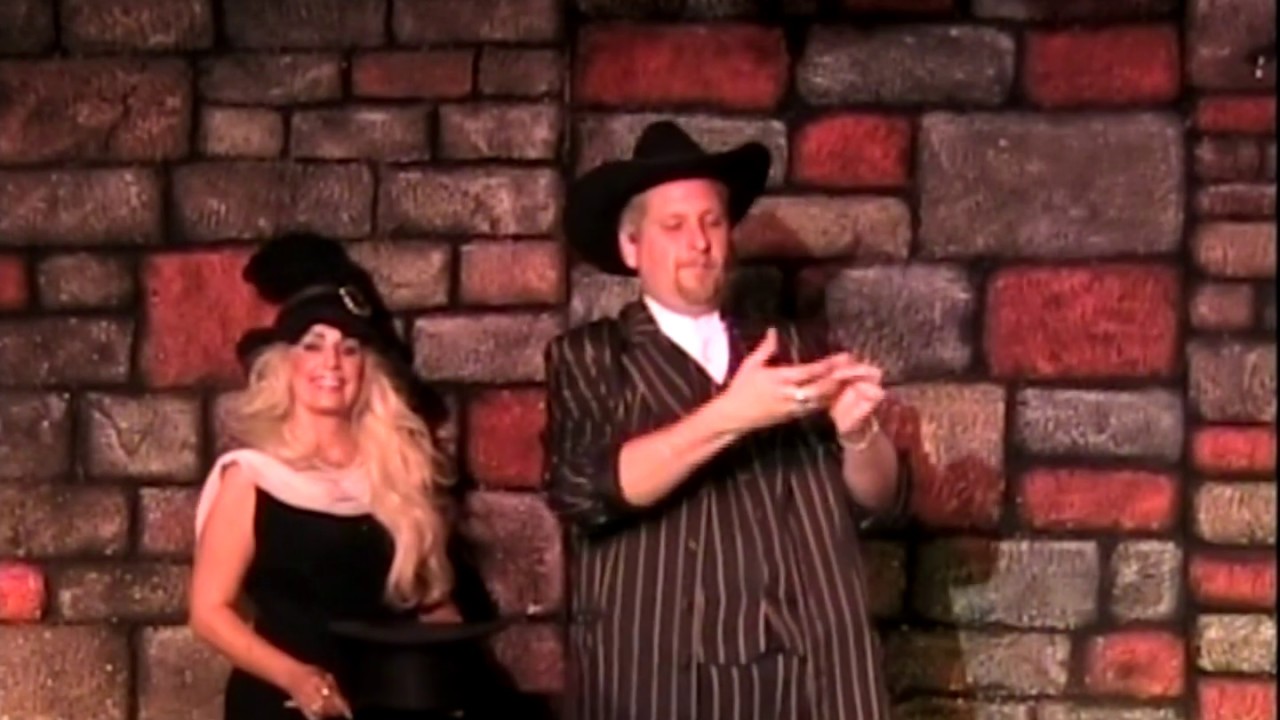 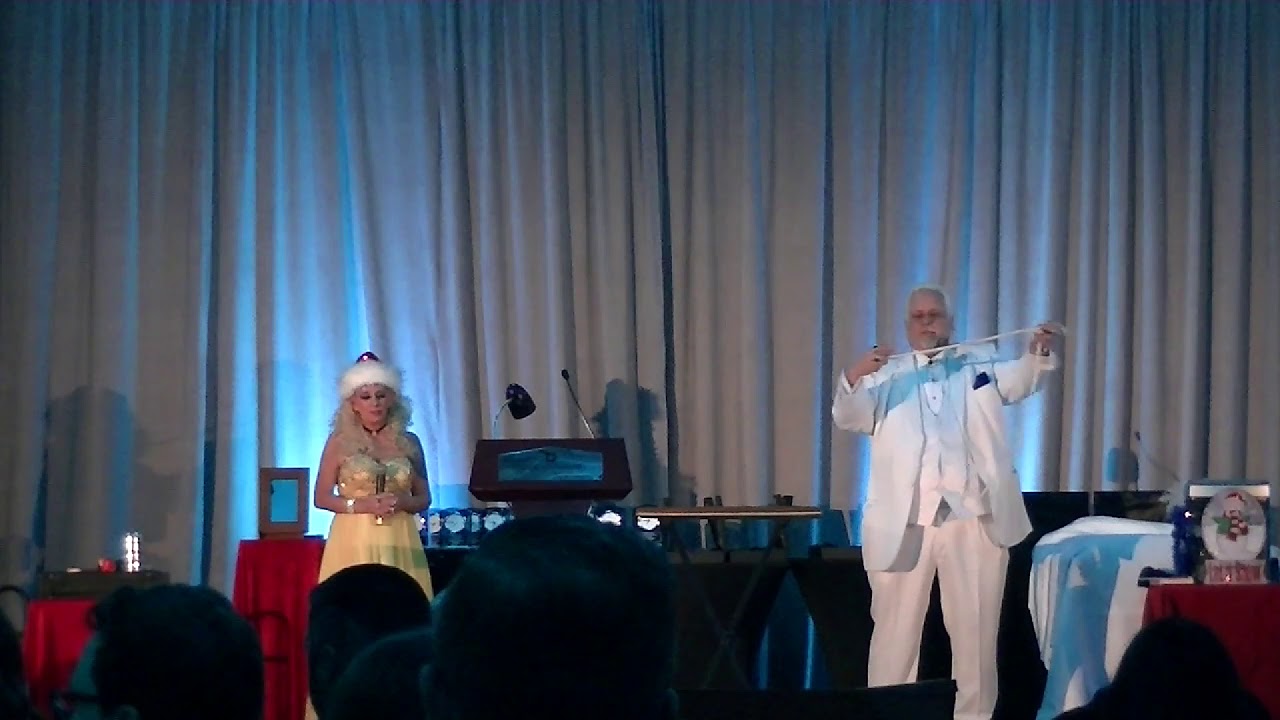 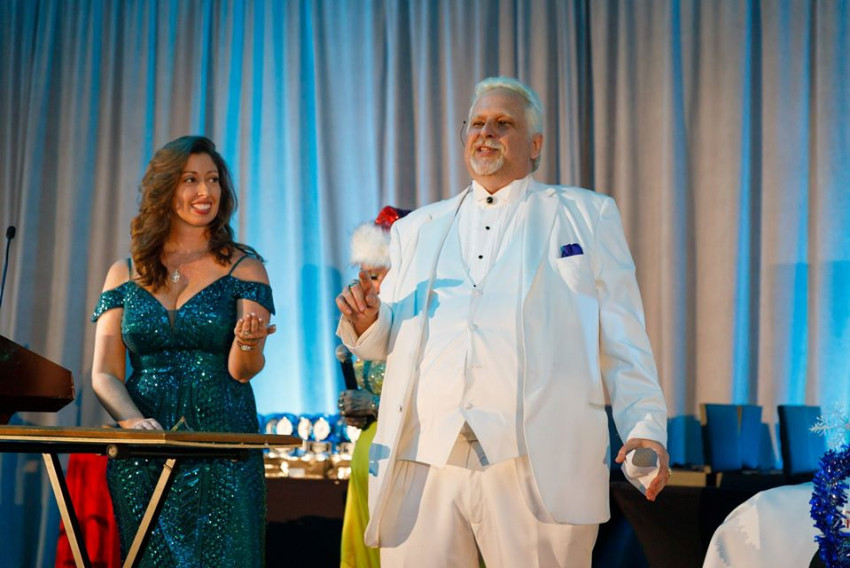 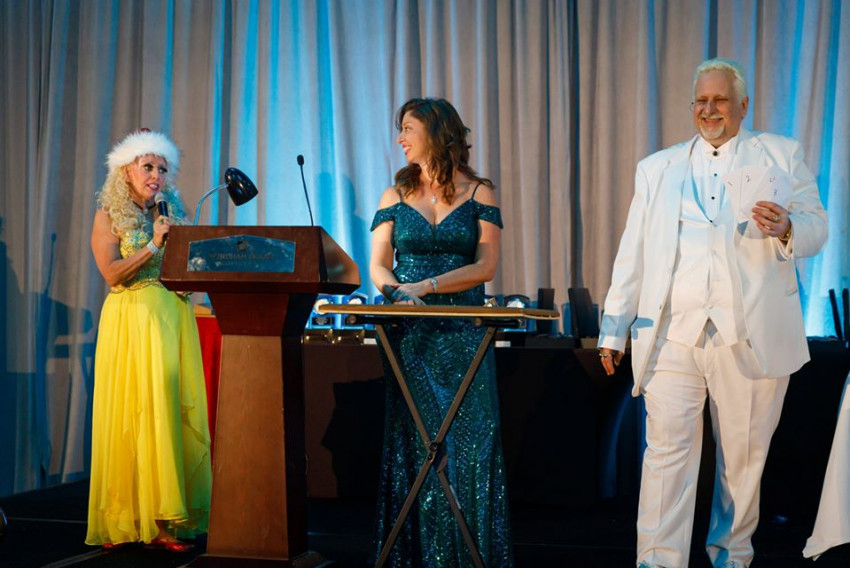 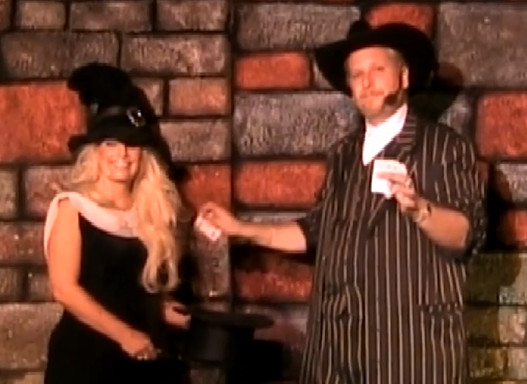 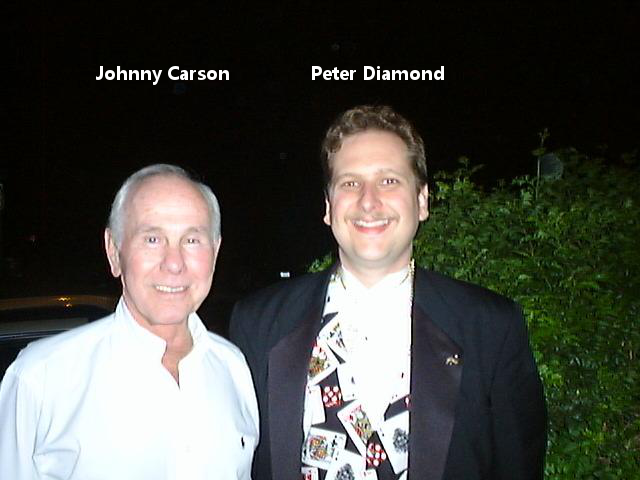 Johnny Carson and I 1998 Malibu Beach after a private command performance for him. 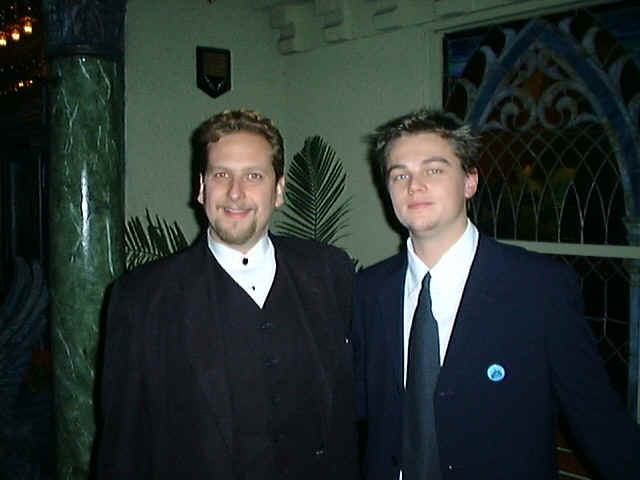 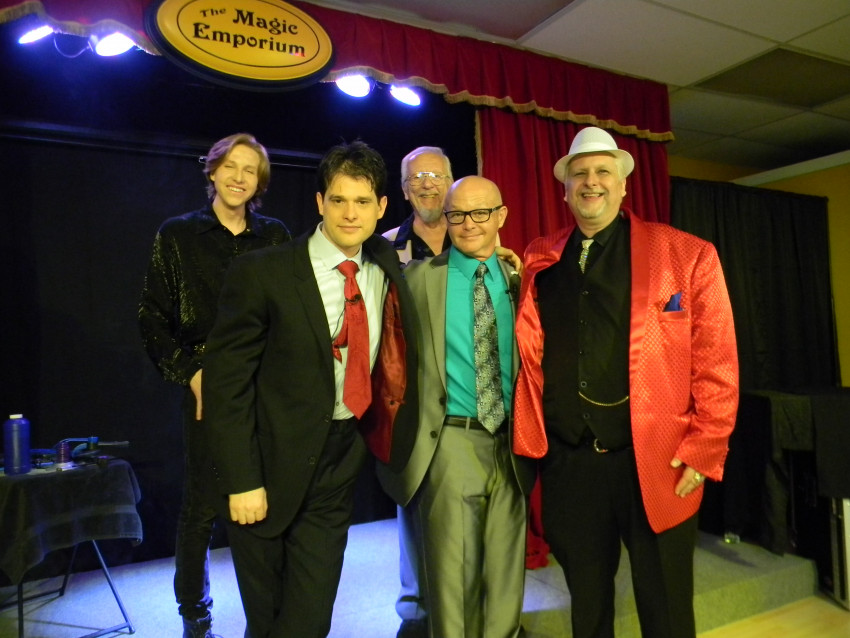 Peter Diamond Entertained Stars, Corporations and people just like you

We specialize in corporate events. Some of our clients include Microsoft, Bank Of America, Merrill Lynch and many others.

I worked at the World famous Magic Castle for many years entertaining Celebrities and other Magicians. We did a tour of 250 cities and 9 countries. I worked at the Chamber of Magic in Orlando 7 nights a weeks 2 shows a night from 2003-2006.
I had my own Magic Nightclub in Tampa at the Crowne Plaza Hotel.
We have won multiple awards three years in a row 2017, 2018, 2019 at the Daytona International Festival of Magic in the Stage, Close-up and Strolling categories.

I work with my wife/assistant Ruby.

Be the first to review Magician Tampa

Your guests will be thoroughly entertained. Whether we do Stage, Parlor or Close-up Style Magic for User Events, Holiday Parties, Trade Shows or any type of party. Over 40 years of experience at your service.

Magically Entertains at your corporate Events, Trade Shows, Hospitality Suites, Meetings and Inspirational Sales Events. I have worked for B of A, Microsoft, Microfocus and many other corporations at many events. (link hidden)

I also had my picture on the Wall of Fame at the World Famous Magic Castle from 1999 until 2011 when many were damaged by a fire that was repaired in Hollywood and I have been a performer there since 1992.

Highlights of My Magic Resume:

Some testimonials -
Comments from people that came to our shows:

Peter Diamond is the best up close magician I have ever seen. He and his dazzling assistant Ruby Diamond will give you the most fun evening you've had in a long time.
Rex Mantooth

I've seen quite a few magicians in Vegas and Los Angeles and this was amazing. Peter Diamond was incredibly impressive, this isn't your average magic show, these are incredible demonstrations of slight of hand like I've never seen. Highly recommended and I will bring people back.

Peter Diamonds magic show was awesome. He did so many tricks and I couldn't figure out how he did any of them. He absolutely blew my mind. It almost seemed real

Dr. Peter was awesome, his up-close magic skills need to be experienced to be fully appreciated. He was a true professional and very gracious to my family.

What a good show! He tied old classic magic tricks with new ones.
Caridad Mora

We can accommodate 1 to 50,000 people in our audience. We have Stage, Parlor, and Close-up Shows available.

We are very flexible with technical requirements. I just require the show is done indoors.

I cannot list them all as Our Close-up shows, I have 50 ten minute sets that I have done for years that follow a formula and can be combined for almost any length.

Close up show ONE for example contains effects with Cards, Coins, String, Borrowed finger rings, and each show ends on an Impossibility. We have performed a gambling demonstration show at the Magic Castle close-up room with classic sleight of hand effects where all props are examinable by the audience and gaffs are kept to a bare minimum, if used at all.

A typical Parlor set includes Cups and balls, Strings, Ropes, Large Cards, Mentalism, Levitation, Card Manipulation, Professor's Coins in glass, a very visual Card launched through Glass that has to be seen to be described, and a game show bit.

Our Stage shows have a Crystal Casket, Appearances ,vanishes, Levitations and Transpositions of people and animals available.
Animals are domesticated dogs and birds only that are loved greatly.

All shows can be themed and have light, very funny humor involved.

We also combine these in trade shows to get people in your booth in large numbers.

I studied Magic at the Academy of Magic Arts. I learned from Dean Dill, Larry Jennings and Martin Nash, The Professor Dai Vernon, and Billy McComb. Also, Terry Seabrooke, Losander and Steve Phearson are influences.