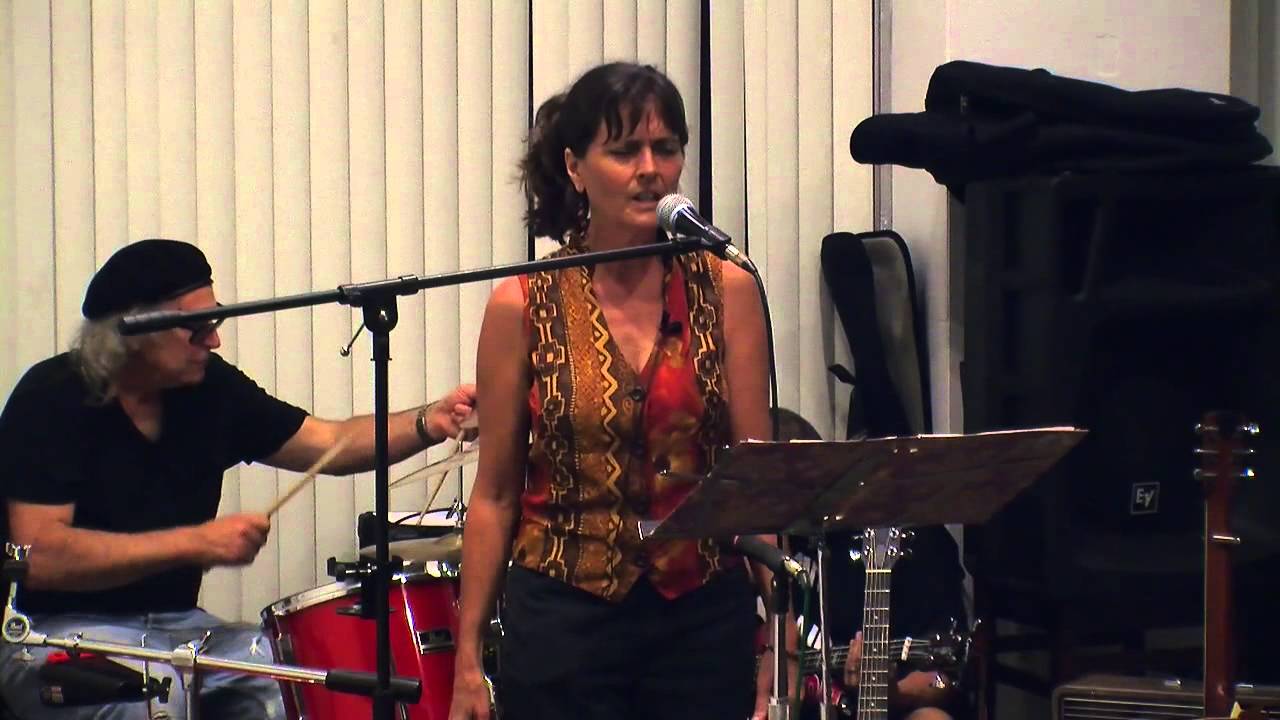 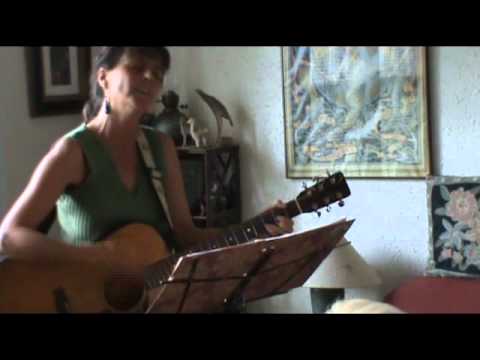 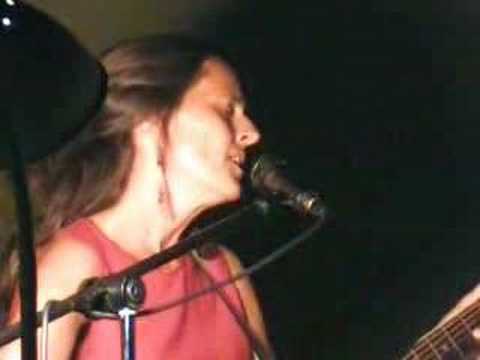 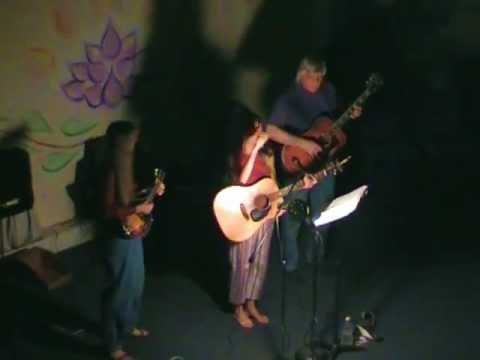 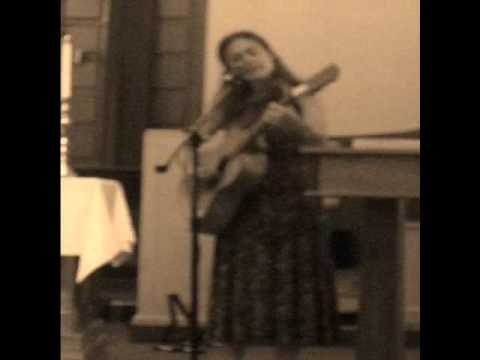 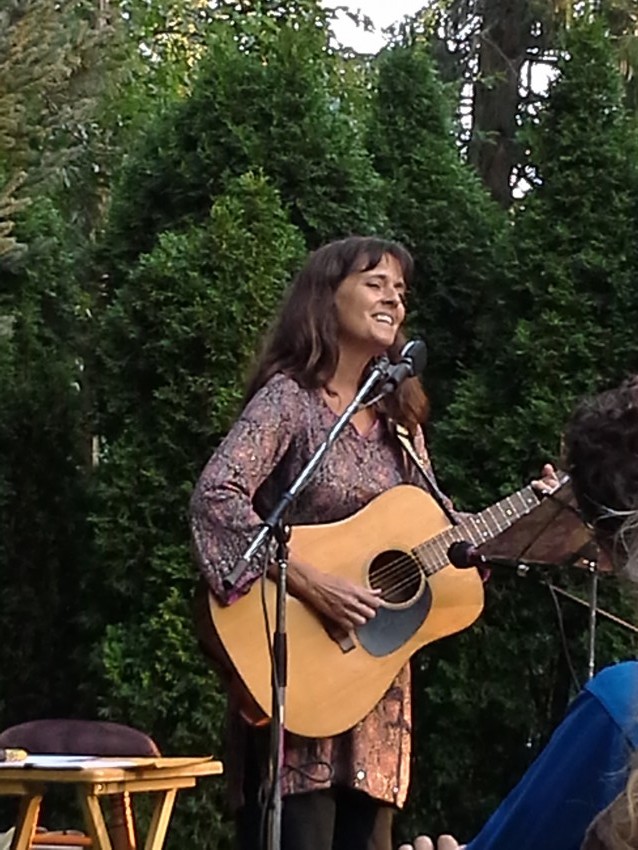 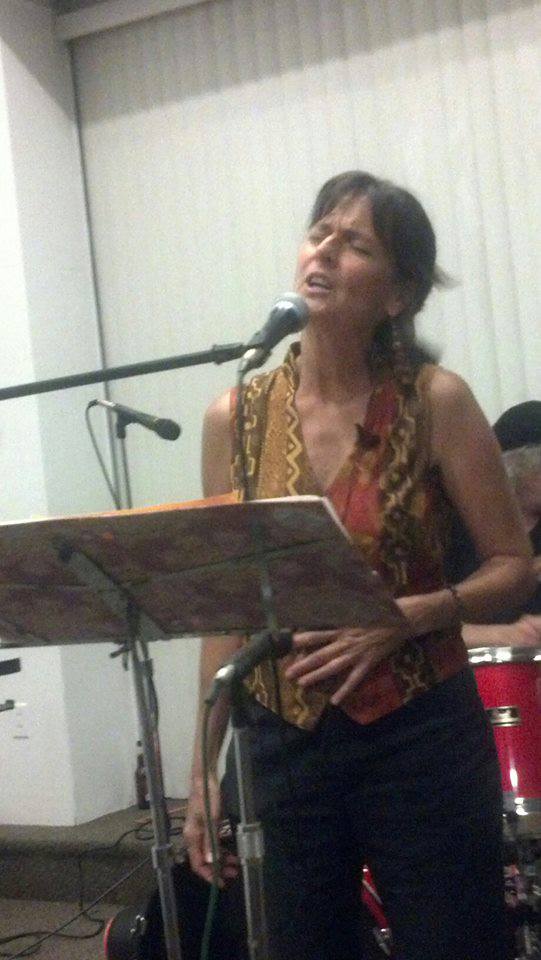 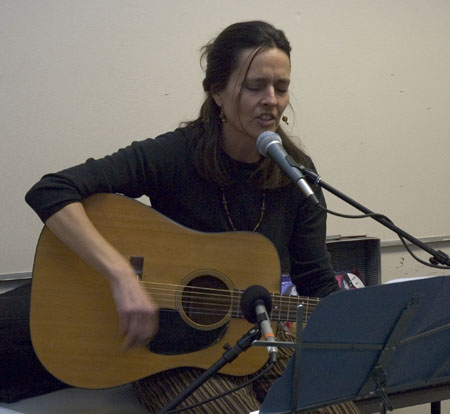 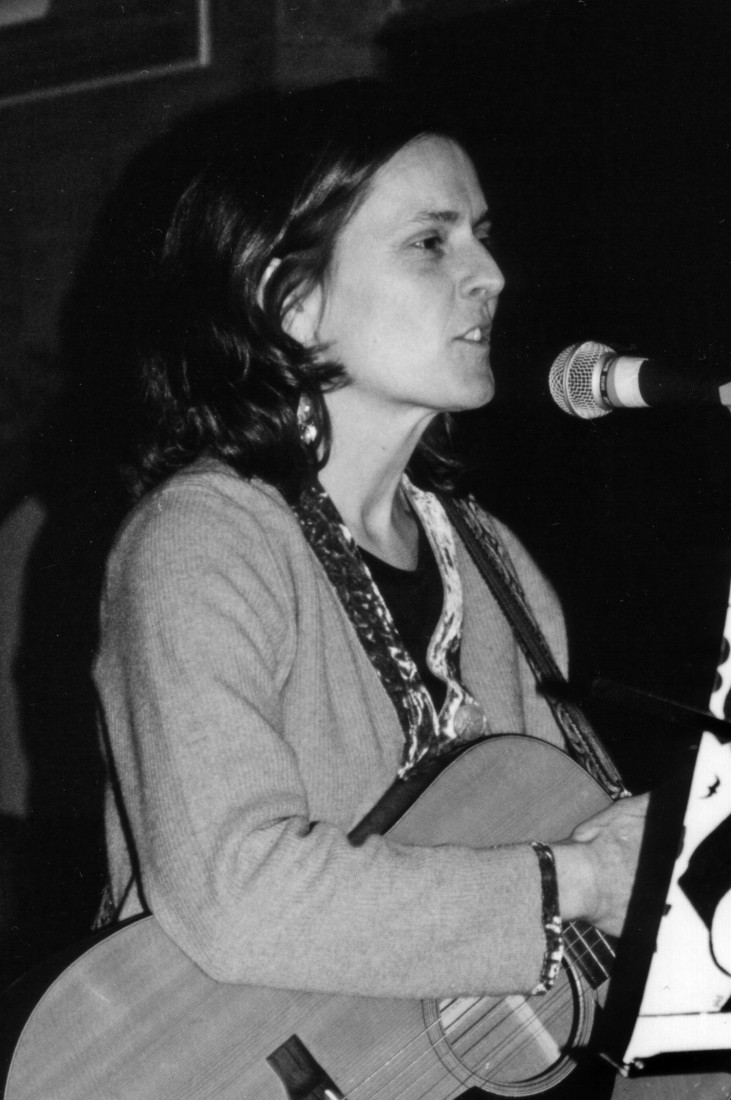 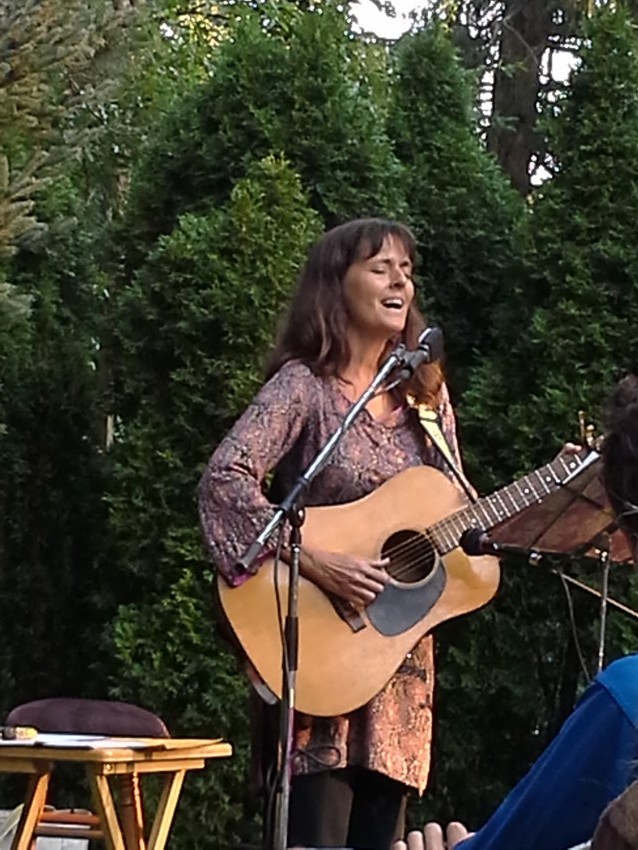 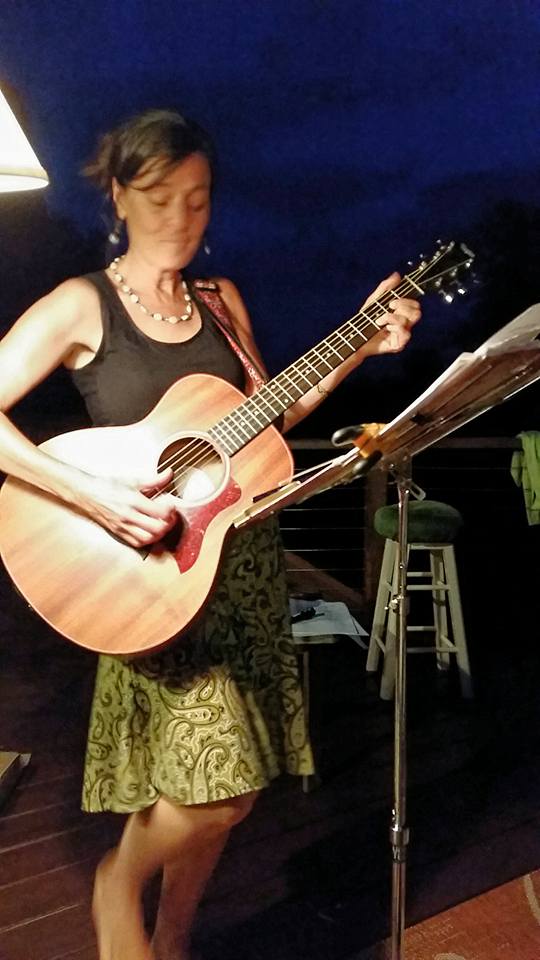 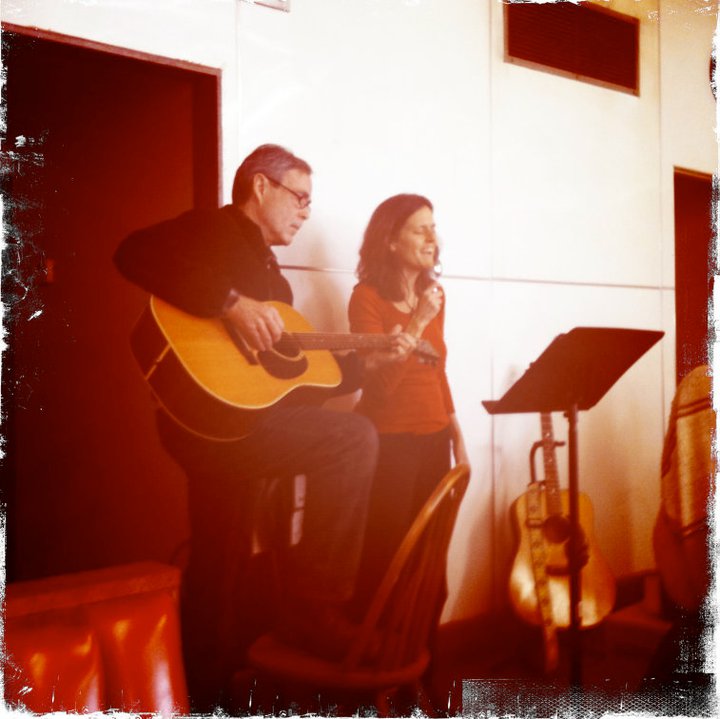 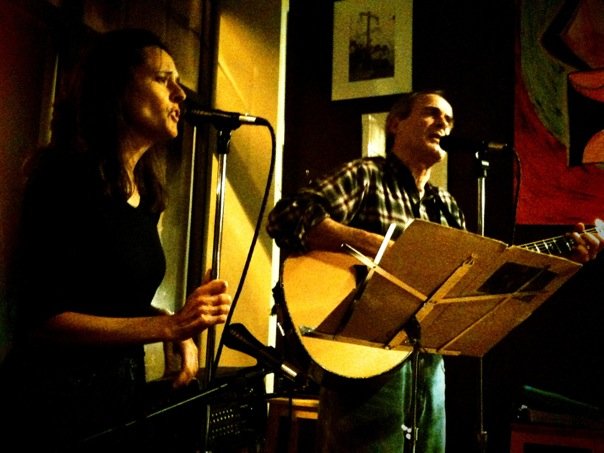 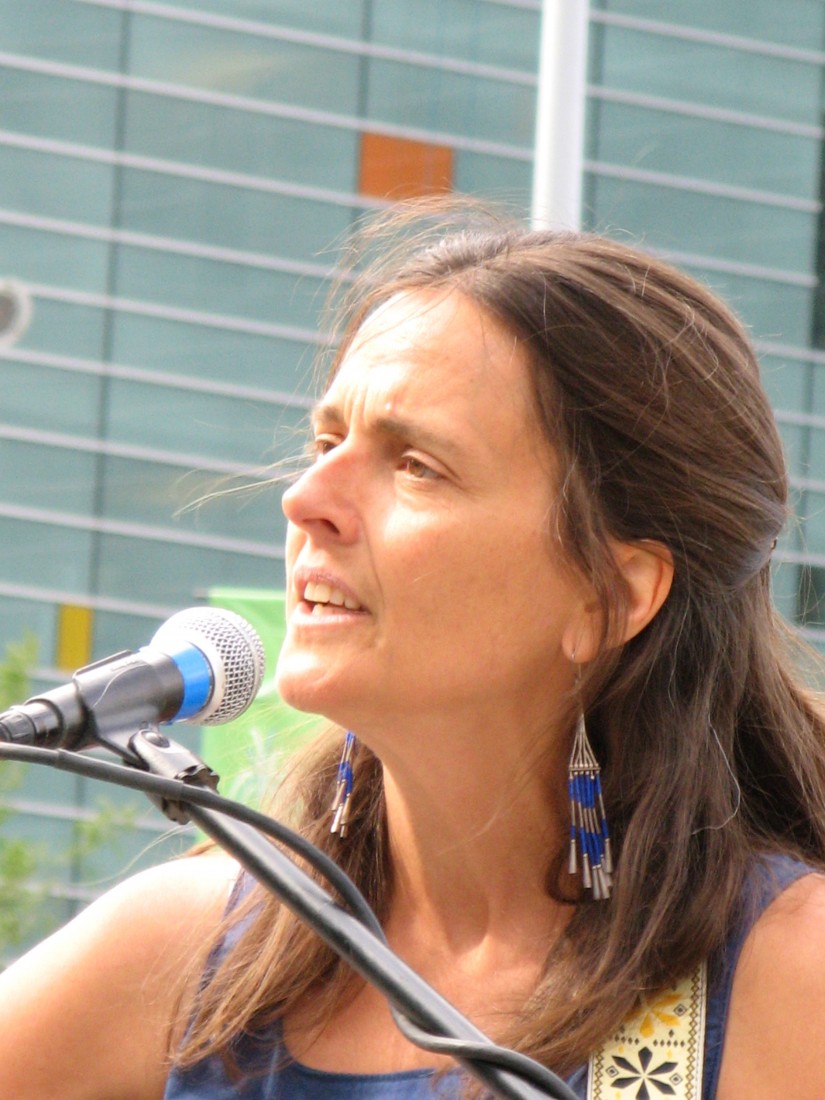 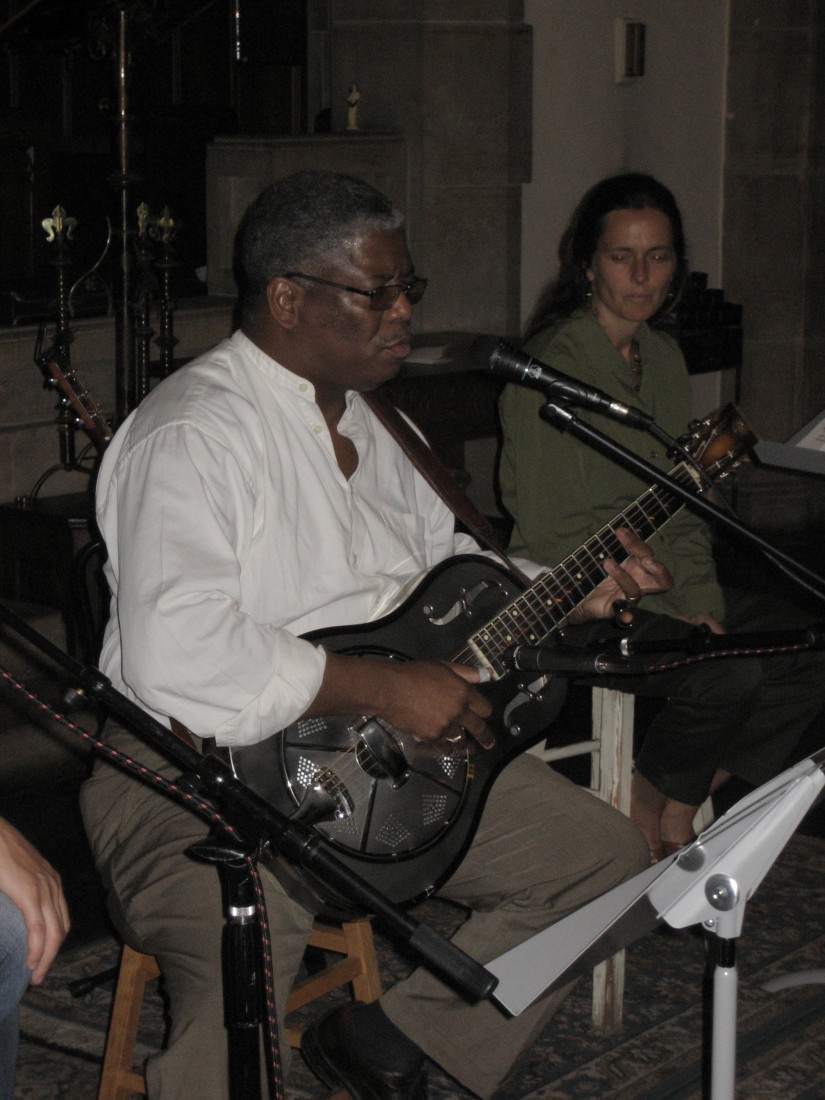 I love singing and performing! I lose myself in songs sometimes. I've been known to make people cry, laugh, and join with me singing along (if the event is appropriate for it). If I'm singing at a funeral or wedding, the songs are chosen ahead of time. But when it's a concert, I'm good at reading a group and choosing songs that move them most. If my audience are mostly over 70 years old, I sing songs from the 30s - the 60s. If they're baby-boomers, I'll throw in songs from the 60s & 70s. I always do some fun songs, and try to take requests. I love what I do and make it the best experience for all of us.

Julie did a wonderful job. Even though we were outdoors and it was windy and chilly she sang beautifully. She was also gracious and kind to my entire family; her singing added a very special touch to the ceremony. Many thanks to Julie

Thank you Mary. I was honored and delighted to be a part of your intimate gathering with your husband's loved ones. In spite of the cold wind, the sun and blue sky were glorious.

I am a very, very happy customer. You can be assured that Julie is representing your company with the highest standard of professionalism and talent.
I was looking for a singer to participate in my brother's funeral service and wanted someone who was willing and able to understand my brother and accept the unique challenges of working long distance. Julie approached every stage of the process with grace, honesty, and confidence. She was responsive and easy to work with, (characteristics that are often hard to find in a skilled performer). She earned my confidence immediately, and I felt that I was working with someone who shared my commitment to honor my brother, his spirit and his personality. We communicated mostly by email and with each contact we came closer to the perfect choices of song and message.
On the day of the service, Julie was the first person to arrive at the chapel and her empathetic and comfortable presents made her feel more like family than a hired singer. Her part in the service was the highlight... serving to celebrate, soothe, encourage and heal. We parted with a long hug and regret by all of us that our acquaintance was merely a professional one.
She declined our invitation to join us for dinner afterward with grace and kindness. Though we wanted more of her presence, we understood her thoughtful rationale.
I recommend Julie completely and have total and complete confidence that any future clients of hers will be as happy as I am.
I am also very impressed with GigSalad's prompt and clear communications. It was seamless and, just like Julie, instilled confidence that I was working with consummate professionals. This was a once-in-a-lifetime event and its success or failure was in your hands. Its success is a tribute to GigSalad, as well as Julie B.
Thank you all,
Sue,
Susan McCulley

Wow, Susan. I’m humbled by your glowing review. I was honored to be part of your brother’s memorial. Thank you for everything

Julie was instrumental in providing a beautiful and inspirational last goodbye for our loved one at her Mass Memorial. Her artistry of voice and guitar exceeded our expectations. She helped with the content of music for the mass which was unfamiliar to me, communicated even though she was out of the country, arrived to the event on time and prepared. Julie even reorganized the hymns effectively with minimal stress on the family, when on the morning of the event, a member of the church decided to omit some hymns that were approved several days prior by the music coordinator in charge. Julie filled our hearts with her beautiful performance and by her dedication to our memorial event. We highly recommended for her outstanding professionalism and service.

Wow, Veronica. Thank you for such a glowing review. I'm humbled. And thank you for hiring me to sing for your mother's memorial service. I was honored.

Julie was not only amazingly entertaining but also helpful at my event. I can say that people "fell in love with her music!"

Thank you Adarsa. I really enjoyed the whole evening, and was happy to be part of it.

Julie's singing added so much beauty to my father's memorial service. She was very helpful ahead of time - sending a short list of song suggestions, two of which were absolutely the perfect choices for remembering my dad. If he could have been there to hear Julie singing so beautifully, he would have been wiping tears out of his eyes. Julie is a warm and kind person, as well as very professional. My family is so grateful to her for sharing her lovely and comforting music with us.

Thank you Mary. I was honored to sing at your father's memorial. Happy to do it, and so glad you and your family found it comforting and fitting. I would have liked to know him, I think.

-singing at the bedside of dying friend or family member;

Julie sang and comforted my wife
Julie sang for my wife
Marlene when she was in home hospice. I highly recommend her for your loved ones in the same situation. Her adoration and beautiful voice will comfort your loved one on their journey.

Thank you for your kind review, Tom. I was honored to sing with and for Marlene (and you). It was something I'll never forget.

My sincere thanks to Julie B and all that her beautiful voice, humor and connection to my guests brought to my 60th Birthday Party. Flexible, focused and unflappable with kids around, she blessed us with an amazing song list including taking the time to add one of my favorites to what she sang. Awesome night. Standing ovation from our lawn chairs!!!

Donna, thank you for hiring me to sing for your birthday party. I really enjoyed your friends and family, and had a blast.

Words cannot even begin to express how happy my fiance and I are that we had Julie come to sing our first dance song at our wedding. She learned how to play/sing our song of choice, was an excellent communicator leading up to the event, arrived early to set up, and did a BEAUTIFUL job!!! Having her sing the song for us was hands down my husband's and my favorite part of our wedding reception. We got a ton of compliments from our wedding guests about how special/beautiful the singing for our first dance was too. I am blown away by how spectacular Julie's voice was!! Thank you for everything Julie!!! :-)!!!

Thank you Adrienne. I was happy, and excited, to learn and sing that song for your wedding reception first dance. The whole experience worked smoothly and perfectly.

Professional, passionate singer and performer; fun-loving and serious about what I do; flexible to accommodate the audience and situation. In some cases I engage the audience, getting them to sing along.

Singer, song-leader, guitarist, teacher & mother Julie Beutel is a native of the city of Detroit. She spent her post-childhood-pre-motherhood years studying, traveling, working and living in several countries in Europe and Central America. Her mothering years she lived in Detroit raising her kids, teaching music to children in Southwest Detroit, and singing. She also washed uncountable mounds of dishes.
Julie sings at coffeehouses, concerts, fundraisers, funerals, memorial services, weddings, schools, libraries, senior centers, and house concerts. She has sung in jails, subway stations in Europe, soup kitchens, bars, nursing homes, churches, trains, plays, and peace marches. She has sung at the bedside of dying friends. Once she sang to a crowd of over 20,000 (sharing the stage with several artists). Once she sang to 248 empty chairs. (There were two people in the audience.)
She has hosted more than 55 house concerts in her living room, featuring local acoustic musicians. She also hosts and leads sacred singing/drumming circles in her home.
Julie sings from the depths. She is not afraid to address painful, awkward, controversial or funny issues in the songs she sings. She has the ability to make you cry, laugh out loud, or squirm. She loves to make people laugh. She’s honored when people say she made them cry. Her voice is beautiful and rich. Her performances are personal, intimate and fun. In between songs - when the situation allows - she tells stories, cracks jokes and pontificates. She loves to sing and perform more than almost anything else.
She’d love to do a house concert at your house, in fact! It’s easy! Ask her about it!

Depending on the event, we might want to do a sound/light check. This can be discussed and decided for each individual inquiry.
For most events a sound system is needed, but not for intimate settings (such as someone's living room). I need two microphones with corresponding mike stands (one for guitar and one for voice). I also can bring and use my own sound system for $100 extra, cash or check.
Good lighting helps a lot, but is often not available, so we do the best we can.

Oh my! I have about 500 songs in my repertoire. Impossible for me to list them all here. I have songs I would sing for senior citizens (mostly old standards, show tunes, gospels, etc); songs for funerals/memorials; songs for weddings/anniversaries; songs for kids; songs for house concerts, fundraisers, etc. If you contact me about singing at an event, we'll have a conversation about what sort of songs you're wanting, and choose appropriate songs accordingly.

Two microphones with corresponding mike stands (along with a sound system - speakers, amp, etc). Unless the space is intimate, and it might work with no sound system. I also can bring and use my own sound system for $100 extra, cash or check.