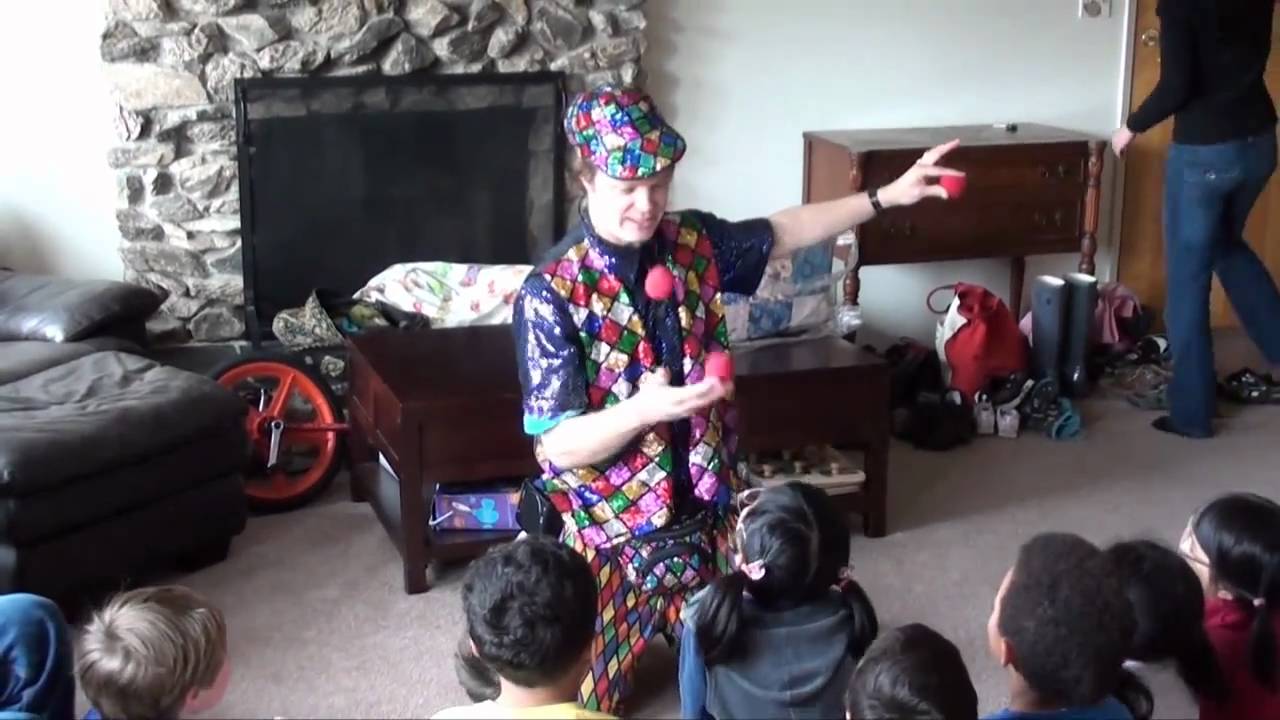 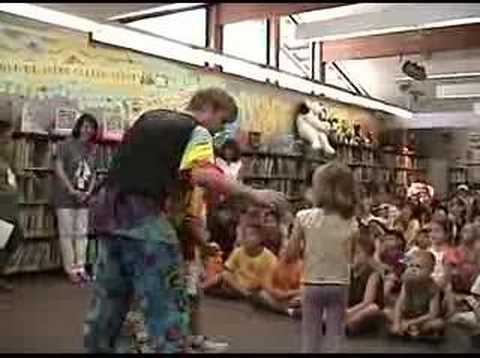 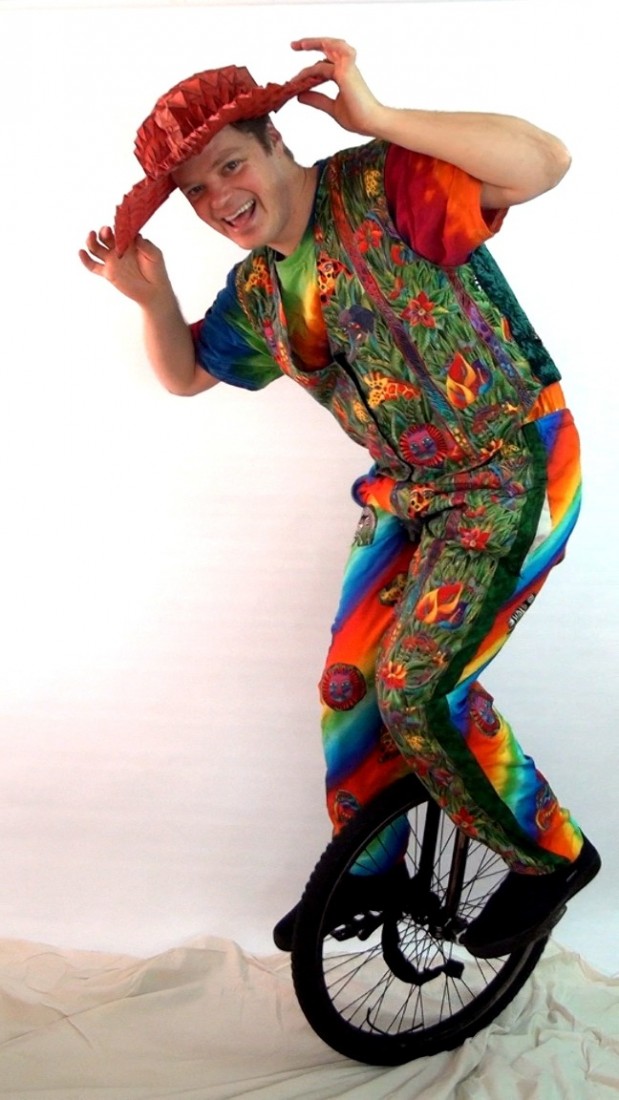 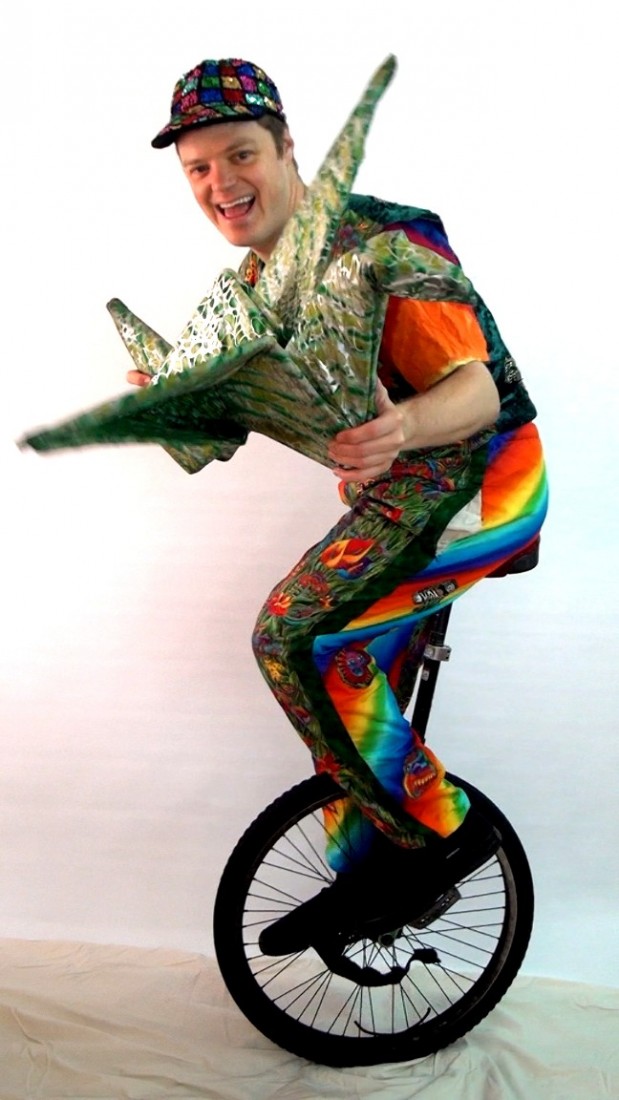 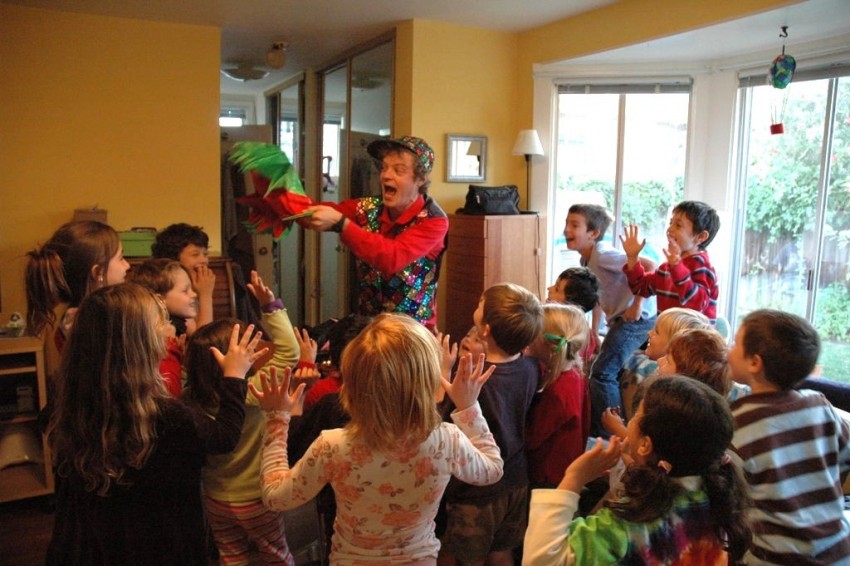 Entertaining with origami at a birthday party 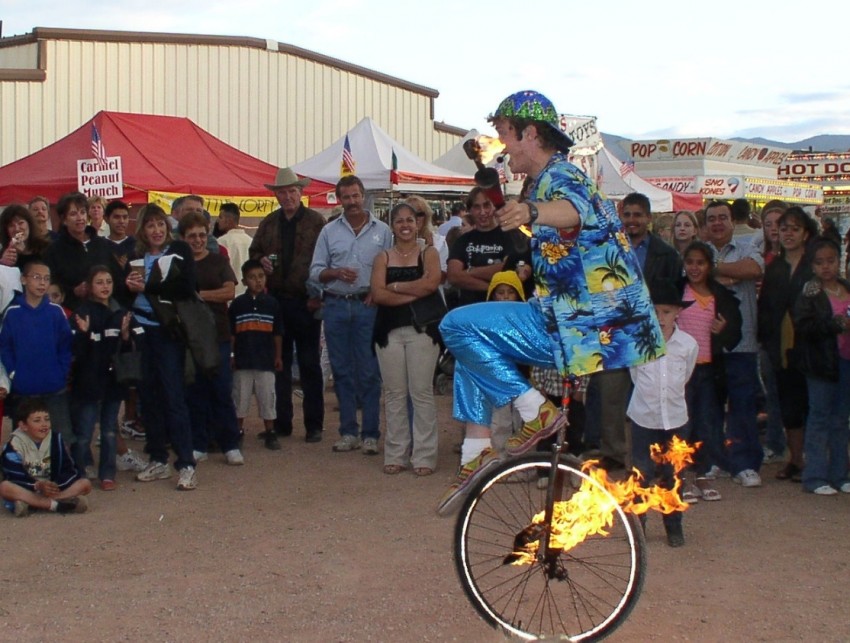 Entertaining at a Fair 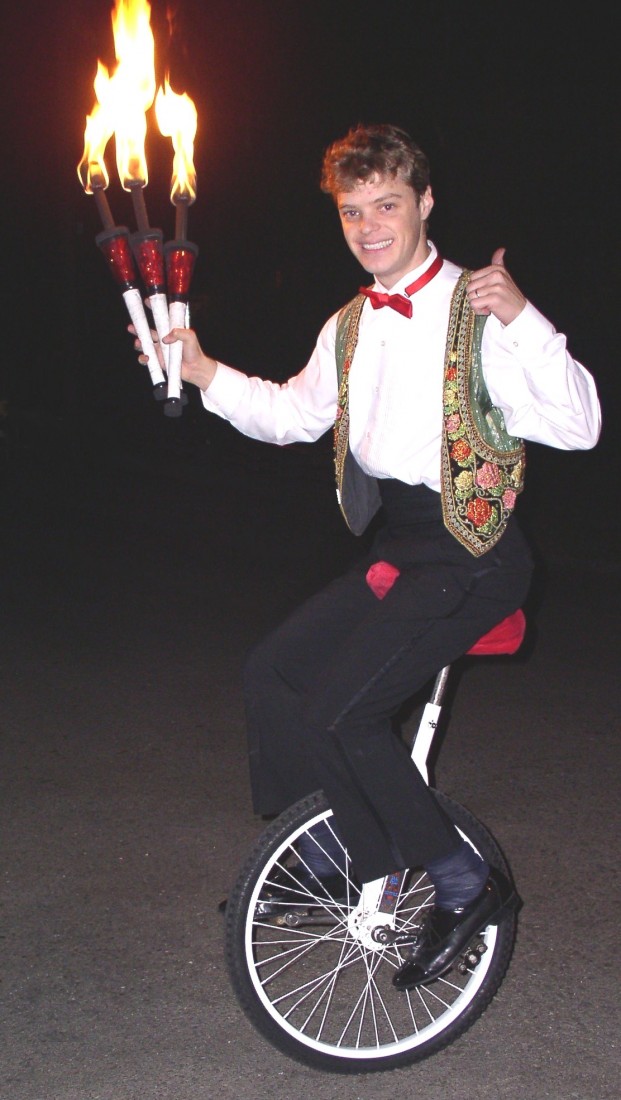 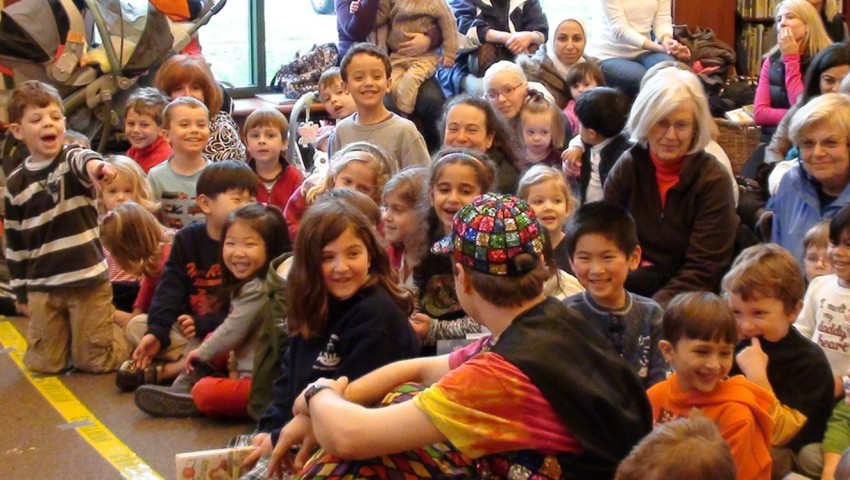 Warming up the crowd a library show

Performing my origami show at a private party 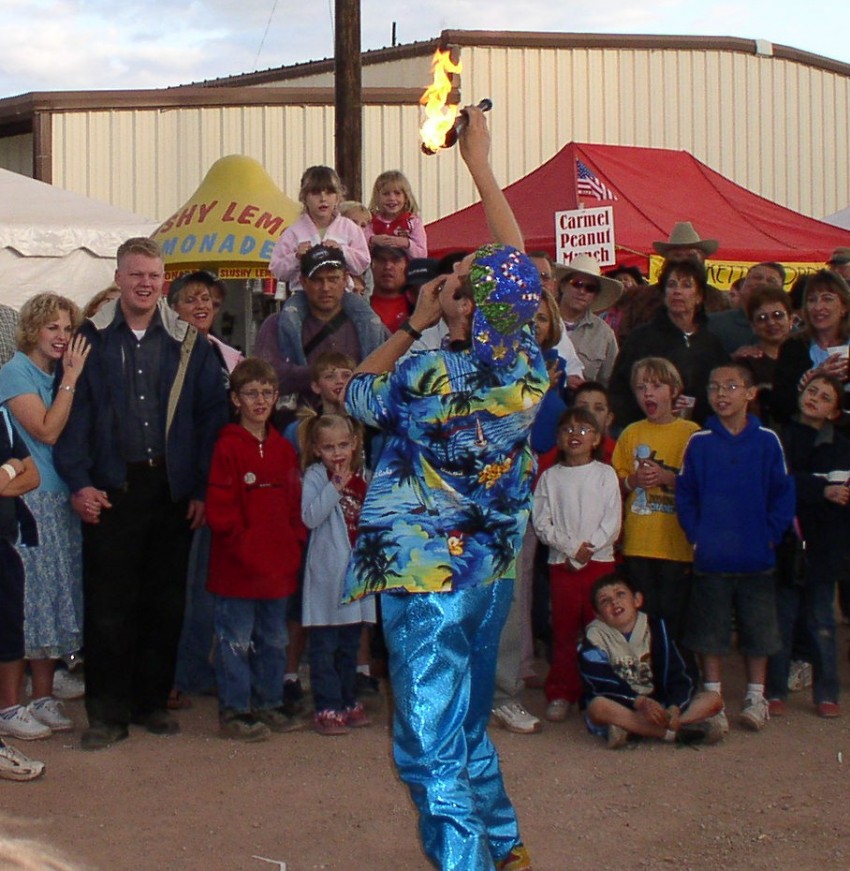 Fire eating at the Maricopa County Fair in Arizona 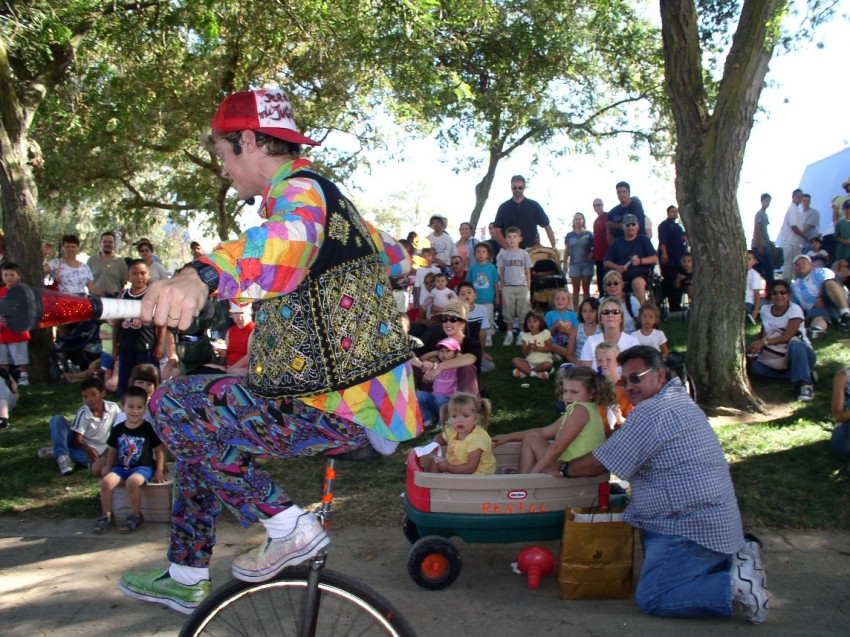 Entertaining at the California State Fair 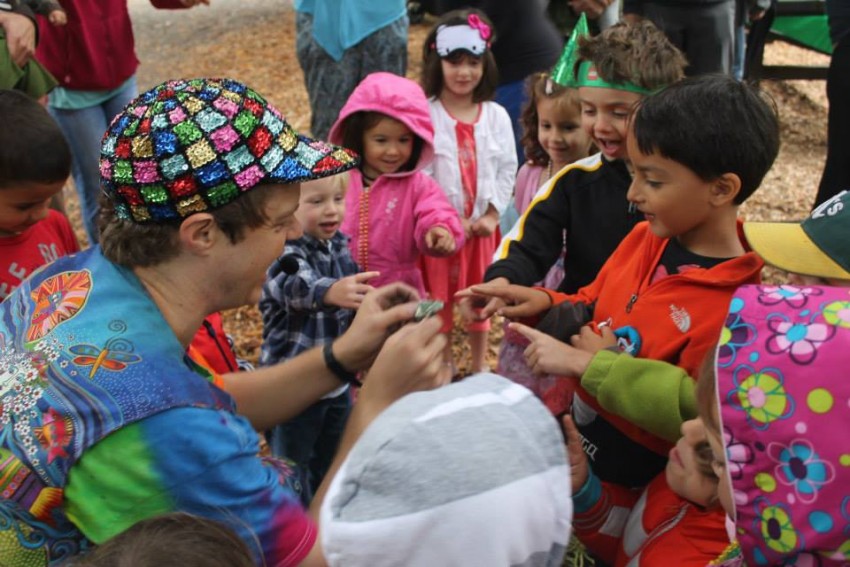 Performing my origami show at a private party

Jeremy the Juggler, Unicyclist, Magician and Clown - Entertainer for birthday parties, corporate events and festivities of all kinds and for all ages!

Jeremy's entertainment, which can be tailored to fit any type of event, most often includes a zany 30-minute "Big Show" with juggling, unicycling, transforming origami, magic, comedy and more.

The "Big Show" is followed by the "Post Big Show" entertainment which includes juggling and origami teaching or making balloon animals.

For company events and banquets, the Post Big Show entertainment means roving table to table doing interactive comedy and close-up tricks. In addition, roving can include unicycling around while juggling glowballs.

Jeremy the Juggler was great. He arrived early and made animals balloons. He combines silly with highly skilled acts in a way that the kids love.

He comes up close to the kids, which is nice but then some kids might start going thru his stuff which becomes tricky to manage.

Response from Jeremy the Juggler, Unicyclist, Magician and Clown:

Thank you Alok for your kind feedback. Yes, I do like to bring the kids up close because that way I can better captivate their attention, and when they are in a tight group we can more easily move from spot to spot to break up the show into more digestible chunks. There was really just one child that I had to remind several times not to grab my props and I consider my reminders a valuable learning experience for this child.

You have a kids party, you need Jeremy and kids will have a blast!!!! Jeremy was on time and entertained the kids (5 to 9 yr olds)from start to end nonstop with various juggling acts.. even the grownups enjoyed and wanted to know where I found Jeremy!!! we all had good laughs did not know how an hour passed.. Thanks Jeremy for making my sons birthday memorable.

Jeremy added so much to our party -- will definitely hire him again!

Jeremy put an amazing entertainment...All the kids enjoyed a lot. This was the best part of my kids birthday. My boys were thrilled and their friends had the best time ever. Totally recommend Jeremy for kids birthday. He is energetic, entertaining and have a very good personality. Thank you Jeremy for making my boys (both of them) birthday memorable. Sorry for taking so long to put down a review. Nevertheless you are the BEST.

Jeremy was polite, punctual and super entertaining for our Cub Scout party. Saw him first at the county fair and then now in a more private setting. Such a great show for the younger kids.

Thank you so much for an incredible evening of entertainment! The feedback from our parents and students was very positive, everybody absolutely loved your show! We are also very grateful for the amount of time that you spent entertaining children who were waiting in line before you started your show. It was definitely going the extra mile. You were so easy to work with from beginning to end. We are so pleased!!

Many Thanks to Jeremy the Juggler Fantastic Show

Jeremy was very professional, very enthusiastic for the entire time. My daughter, family and friends enjoyed every minute of this experience. I will recommend him and this service for future parties.

Jeremy did a great job. The audience really loved it!

Jeremy did roving entertainment with origami and then unicycling, and juggling performance on the stage. Very good, and I like his colorful costume as well!

Response from Jeremy the Juggler, Unicyclist, Magician and Clown:

Thanks Ray for the nice review! I enjoyed performing at the party and watching the other performances too. Congratulations on putting together such a wonderful event! Hope to perform for Intel again in the future.

Jeremy was a big hit at our daughter’s 5th birthday party. He had over 15 kids ranging in age from 2-8 yrs old laughing for an entire 30 min. Even the adults had a blast. He was punctual, professional and exceeded our expectations.

Jeremy was awesome! He kept a group of twenty kiddos ranging from two to eight AND adults entertained, enthralled and laughing. Immensely talented and funny, he can juggle, ride a unicycle, make all sorts of cool balloon animals... not to mention he has a whole basket full of his origami he uses in his act. Highly recommend Jeremy!

Jeremy organized his vast experience with entertaining to match our crowd of 11 year old boys. They were engaged and entertained by his talent and versatile repertoire.

We had Jeremy for our 8 year old son's party. They had a blast, they thought he was super funny and awesome. He entertained the kids for 90 minutes without stop, kids were running behind him and had an amazing time.

Fire show was pretty cool and he did the balloons as per our party theme and the kids loved it.

He went above and beyond. Never breaking character. He did everything he promised and more. We even booked him for an additional hour because the kids were having such a great time. When he arrived it was like he appeared out of no where and left down the street on his unicycle. It was so funny to the kids. He reads his audience very well.

He did an amazing juggling and unicycling show, He spend a lot of time doing origami with the kids, they loved it . He was very interactive, running with the kids to the back yard for a part of the show then to the front for some finishing in the back. He kept them busy and entertained the whole two hours, which is amazing in its self. He was also thoughtful and made sure every child, big or small had a balloon animals so no one felt left out.

He's worth every dollar! Book him today!!!

Jeremy did an outstanding job entertaining the kid and adults at our annual moms' club fall event. He was able to get (and keep!) the kids' attention. :) After his performance he worked the room, interacting with families, doing tricks, riding his unicycle. Our committee was was happy with him and would definitely hire again.

The Highlight of the Party

Jeremy was sensational!
His performance not only brought smiles and laughter not only to my 6 year old grandson and friends but the parents as well!

Jeremy will tailor his entertainment to your particular event, which means any combination of "Big Show" , strolling, teaching origami (or juggling), or making balloon animals.

Strolling is roving around the event usually on a unicycle juggling and entertaining the guests. It can range from ambient (no interaction) to interactive table-to-table 3-minute shows.

Teaching origami and jugging is fun for all ages

Jeremy's balloon creations are best for ages 6 and younger. The menu consists of about 30 different one-balloon animals which can be attached to hats or leashes. Other items include swords, shields, flowers, hearts and crazy hats.

Jeremy Shafer is a celebrated bilingual juggler and unicyclist, who has performed at fairs up and down the state and at all sorts of events around the San Francisco Bay Area. His venues include schools, libraries, hospitals, fairs, festivals weddings, birthdays and corporate events. He has entertained for Motorola, Genentech, Microsoft, Oracle, Industrial Light and Magic, Bayer, Kaiser Permanente, Red Bull, Pixar, Intel, PayPal, Adobe, and Dreyers Ice Cream.

In addition to juggling and unicycling, Jeremy is also a world-famous origami designer specializing mostly in whimsical and kinetic origami models. Every week he uploads a new origami tutorial onto his YouTube channel, www.youtube.com/jeremyshaferorigami , which currently has 425,000 subscribers and 165 million views. He has designed hundreds of original origami models and written three books: "Origami to Astonish and Amuse," "Origami Ooh La La!" and "Origami Pop-ups." He has taught and performed at origami conventions in ten countries and he placed second on TV Champion, a survivor-esque Japanese TV show, competing against four Japanese origami masters. His other talents include handwhistling, salsa dancing, beatbox singing, unicycle basketball and his newest talent, playing Scott Joplin rags on the piano. He was featured in the Ukiah Daily Journal here: (link hidden)

When appropriate, Jeremy uses a 20-watt belt-pack amplifier, which is plenty loud for most audiences. For very large stage shows (200+ people) he can bring a wireless mic that can plug into your sound system.

Jeremy's show can fit into just about any performance space. For the Big Show, shade (at least for the audience) is appreciated, but not required. The Fire Show -- torches, fireballs, flaming unicycle, flaming origami and fire eating -- is for outdoors only. 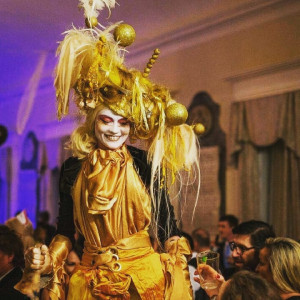 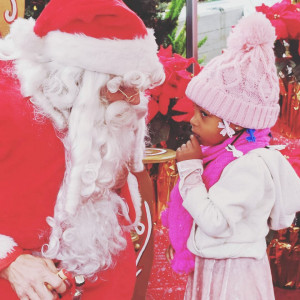 Anastasia M. said “Santa was flexible with walking around and visiting residents in their rooms. He put a lot of smiles on everyone's face and had a great since of humor.”

Sophie B. said “James was amazing and kept both the kids and adults entertained throughout the show. Highly recommend the balloon twisting also! The kids loved it.” 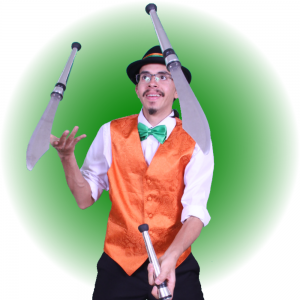 Shelby D. said “This was one of the best all-around performances I have seen. He was on time and very prepared! He was very interactive with the kids and parents. All…”