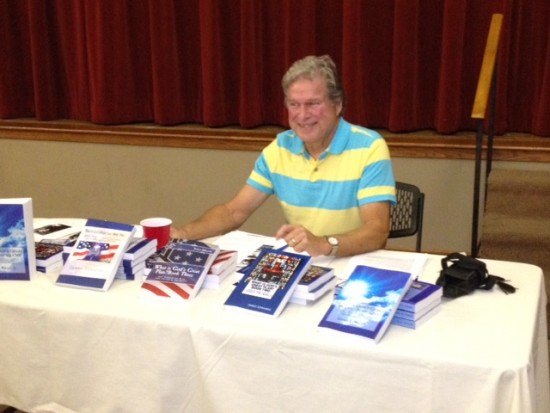 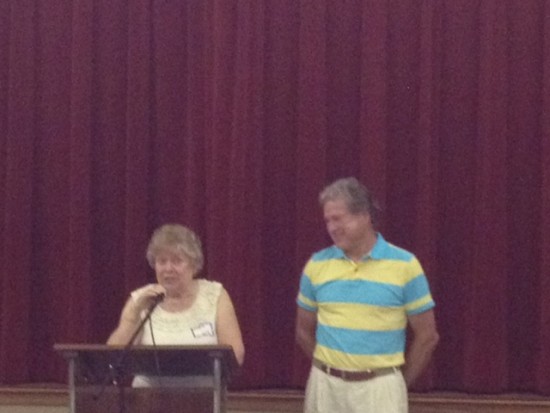 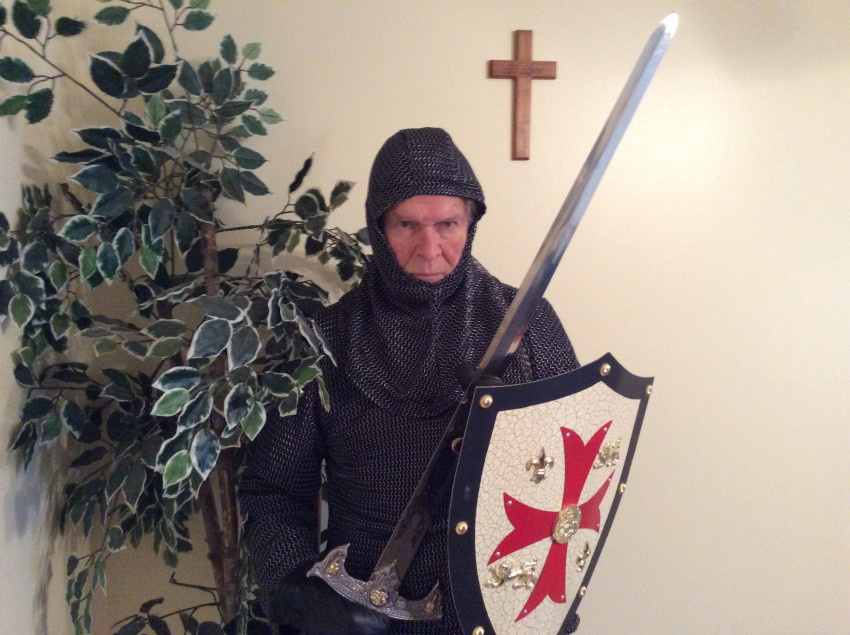 Christianity Today, magazine; "One of the most important messages for Christians - Ever! The definitive book on Christian history that includes the greatest problem of this age; 'Islam' - is it truly the Enemy?

Now, in a massive five-book series, this book raises so many questions, and incurs so much discussion, that crowds are responding to the author's appearance every time. The author. a former U.S. Marine, is a dynamic speaker who captivates crowds.

The author brings his authentic 4' Crusader sword and shield to the stage.

I am President of St. Luke's United Methodist Church in Indianapolis, IN. James recently spoke before our group. He was extremely well-received, and we hope to have him back again for another group in November of this year. He did a book signing, sold all the books he brought, and took orders for more. He gets a five-star recommendation from us.

My trip to Indianapolis was the best one so far. I appeared before a group of about 120 senior members of St. Lukes Methodist Church - the Elderberries. A few there had already read my book, WHAT IS GOD'S GREAT PLAN? and had brought friends. The church has a bookstore, and a poster was there announcing my appearance, and a display of my books. Other postrs were evidet in the main lobby, and on their bulletin board. After a dinner that the group had, I gave my talk abut Christian history. They were very attentive, and asked questions afterwards. My talk was supposed to be 45 minutes, but we were there for an hour and a half. I sold out all my books, and took orders for more. The church book store sold out, and ordered more. It was a great meeting, and they want me back in October to speak before an even larger group.
The coordinator, Joanne Lakin was very helpful, and worked hard to promote my appearance. I will enjoy going back.

We live in a world where "information" is valuable. Christians in particular will buy books they deem not only interesting, but informative as well, with a "message" they can appreciate. People tell me, after hearing me speak, that they understand more about their Christian "roots", and why the history of Christianity seems an obvious thread in the mind of God.

The importance of my message cannot be understated, since it is a message for all Americans as well as Christians - and, for the entire world. That message is; God has not only chosen to bless Christianity, but America and Israel as well. In the coming years, that decision by God Almighty, will be challenged as never before. For the first time in the history of the world, Islam has been released from its Middle East fortress into the Western world. The result will raise conflict as never before in the history of humanity - and, it is all part of GOD'S GREAT PLAN...

As a former U.S. Marine, I never believed I would be chosen to write such a monumental work consisting of a five book series called, 'WHAT IS GOD'S GREAT PLAN'? The research alone was almost overwhelming in my bid to make history come alive, and at the same time be factual and historically correct. The result startled even me...

I have spoken before large and small groups before. As the co-founder of STRETCH-N-GROW, INTERNATIONAL - a children's fitness organization of over 250 franchises in the U.S. and in 14 foreign countries - I have been called on many times in the past 18 years to speak before groups to justify our program of teaching children the basics of good health and fitness. I retired as Vice-President of that company in 2006, and have since devoted my time to writing. I was in the middle of writing a Civil War trilogy when I was called to write 'WHAT IS GOD'S GREAT PLAN?

As a committed Christian, I prefer speaking before Christian organizations, church groups, schools, clubs and associations. However, I have spoken to non-denominational groups, and political groups, and been pleasantly surprised at the reaction from Jews and non-believers who respect my view, and acknowledge the danger to America, and our future. I would not care to speak before a group of Muslims, atheists, or radical Liberals - for apparent reasons - but, my message is universal; "God has chosen Christianity and America again, to be prominent in history". You can dispute that if you wish, but there are several Biblical principles that seem to quantify that viewpoint.

I love speaking to groups that want to hear "a message", and hope for a clear vision of what America needs for the future. In some cases, I will speak for free, or for "honorarium" fees.
I bring to the stage an authentic 4' Crusader sword and shield as I talk about the 'shield' of freedom that Christianity represents all over the world and the awesome challenge to American Christians in the future.
I promise your audience will not be bored, and will go away with knowledge, questions, and a sincere desire to investigate what they can do as Americans, Christians, and patriots in order to keep America, and our Faith, part of GOD'S GREAT PLAN!

Having read the Bible thoroughly, studying scripture - and too many history books to count - talking with people in depth - in particular many military people who served in the Iraq/Afghanistan wars, and have either written on the subject of Islam, or been subjected to long periods of living with Islamic people - we have all come to the same conclusion; this is without a doubt, perhaps the most important time in the history of both religions and in the history of America. It seems a collision course in the Western world is inevitable sometime in the future.

As a military historian, and a former U.S. Marine, my research took me to areas I would never have investigated. The conclusions in the book are strong evidence of what truly can be construed as being a part of God's Great Plan, for America, Americans, Israel, and the Western world in general.
Geo-politics notwithstanding - and considering the political boiling-pot of America - currently, Americans are divided as never before. As we approach the national election of 2020, we can only hope that America makes the right choice - the one that God Himself has chosen!

It is always the desire of a Christian to be 'In the Will of God' and in support of what Jesus would want us to do - as Americans, and as citizens of the world. To this end, we must study HISTORY. It is the only gauge we have to measure the past with the future. Our mistakes, our accomplishments, our very existence sometimes depends on what we have learned! And - if we learn 'nothing' - than we will accomplish nothing.

It is that which I hope to bring to life before those in my audience - 'HISTORY' - and it's very important role in how to understand what God would have us do as Christians, and as Americans. The best way to be a part of GOD'S GREAT PLAN! By looking 'backward' - we can hope to look 'forward'. For America - and, for the world!