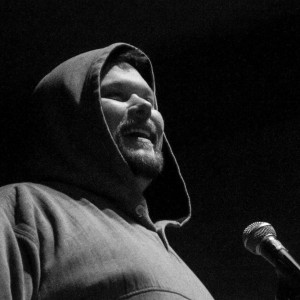 Enjoy the good time comedy of James Draper!
James brings a variety of ways to make you laugh. With jokes, stories, quips, and songs, he’ll have you recalling his set long after the show! Don’t miss this terrific comedian, as your friends will be quoting him all week. James Draper is an R rated comedian due to adult language and themes.

Be the first to review James Draper

Friendly professionalism. James is always looking to provide audiences, venues with a good time. "I've never understood how folks in this business can go to work with a bad attitude. We are here to have fun, and more importantly, make sure those who spent the time and money to be a part of it have fun." The mix between short jokes, stories and songs, keeps the audience on the edge of their seats, ready to laugh at the next one. James is eager to help in the presentation of the entire show, not just his set/time. "What's the point in folks only enjoying my portion of the show? If that's all they have to take away from it, then it wasn't a good show." He's eager to keep audiences coming back so that, whatever the venue, they continue providing a stage for comedy.
Some of his material can be seen as offensive, depending on your level of sensitivity. All are presented in a joke format, and nothing is taken too far. He is not a "preachy" comic, nor does he get on a soapbox with any of his topics. Unless your stage is literally a soapbox, he'll get on one in that case.

James Draper was born and raised in the heart of America. Taking an interest in comedy as early as 4 years old. Performing stand up in front of his brother and cousins at the age of 7. Took an interest in drama/drama club and performed in plays throughout his educational career. Then, hit with the reality of where he was and the need for a job, James put his dream on hold and went to work.

After several jobs and graduating from community college, he heard about an open mic at a local comedy club. His first attempt on stage was March 26th 2008. He got some laughs, and a few compliments from strangers.

Since then, James has been a staple in the Midwest comedy scene. Producing and hosting open mics, featuring and headlining at venues across the Midwest, performing improv as part of The Blacklist Theater Co., hosts a podcast, even playing a part in a locally produced movie. If there’s an opportunity to perform, James is always ready to put on a show and make people laugh.

James Draper’s stand up can be best described as “Good Time Comedy”. Showing off his broad range, James has fun with jokes, stories, quips and songs. Bringing them all together for a fun experience that you’ll recall long after the show!

Just need a mic (preferably with stand), a light, and a stage (area the audience can see me).

Topics include; sex, marriage, drugs, tv shows, movies, dating, racism, social media, dated material (latest news/topics), I also poke fun at myself a lot, as well as other groups of people. Songs are about 1-2mins each and encourage the audience to join in.

stage (area audience can see me)