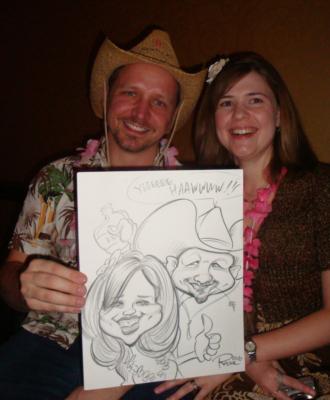 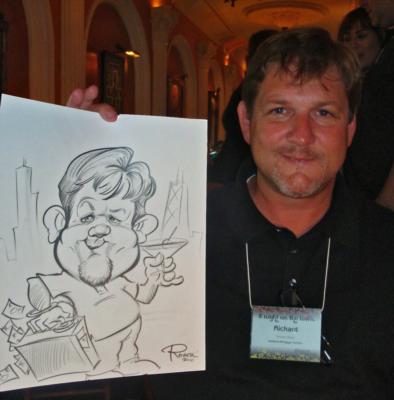 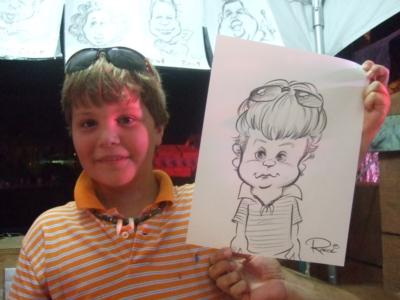 Roger works live, averaging 12-18 caricatures per hour at parties and is always willing to travel, having gone cross-country and even overseas for select jobs. He also specializes in highly rendered studio gift caricatures.

I booked Roger for our small casual wedding. He was on time, polite, worked diligently, and was involved with our guests as he drew them. He added so much fun to our wedding. Everyone loved him! His work was great and really captured who our guests are. We look forward to the possibilities of booking him for other events again in the future!

Roger was great. His art is playful and fun and his attention to detail captures people perfectly. Everyone at our party loved him.

Awesome this great artist is a great person

The caricatures were perfect and very funny
The artist arrived early to the event and stayed until he drew everyone.
He was really nice and fun
I would recommend him to private events. This was a perfect addition to the party
Thank you

Roger was on time, did a fantastic job and delighted my guests. It was a surprise for my husbands 60th birthday party and he loved it also.

doesn't care about commitments or kids

Hired Roger to help with a how to draw activity books project. He never delivered. He kept saying he would get to it - I kindly asked him to please just let me know if he wasn't going to do it so it didn't hold up the project (which the graphic artists, video team and others had to wait for the illustrations to get their jobs done)... he kept saying he was going to get to it but NEVER did.. it cost us time and caused us genuine frustration... not to mention delaying our amazing project from getting to the kids for many months due to Roger not simply saying I changed my mind and am not going to do what we agreed upon!

Roger was great! Professional, interactive, entertaining, and is a great artist. We had about 25 people at our event. Everyone had a great time and enjoyed their drawings. He was a big hit with all age groups.

Roger really turned our party into a 5 star event! Everyone LOVED his work & how entertaining he was! Our BEST Christmas party to date (and I've been here 19 years!!) Very highly recommend!!!! Loved you Roger!!!!

I had hurtado arts for my wedding as well as another artist come. I created placecards for my guests so they could be reused to mark their place in line for the drawing. That way guest could dance and have fun instead of standing in a long line at the wedding. I told this to roger and I heard from several guests that after I walked away he immediately said that's stupid I'm not doing that. You don't disregard what the bride says. Also my brothers went up to him and told him he needed to be doing the placecard thing and he blatantly told them no that's stupid I'm not doing that and started badmouthing them to my guests in front of them. He is BEYOND unprofessional and rude! If I knew during the wedding he did any of that I would have kicked him out of my wedding. Also he made the men look like creepy feminine ventriloquist dolls. We had another artist there who was very nice, added color to the drawings and added personal touches about the person she was drawing. Stark comparison.

The name-placard idea was placed in my lap well into my third or fourth drawing, and I did my best to briefly explain that it wouldn't work because it would require me to get up after every drawing and hunt for the person next in line. This is impractical because a) it wastes time in between drawings, b) I very well can't yell the names out over the loud music and c) I didn't know anyone at the reception so *how* am I to match names with faces? It didn't make sense and a line had already formed before the idea was presented to me, so it was guaranteed to fail.
Yes, choice words were exchanged with your brother because I refused to tolerate his intoxicated aggressive manner.
I also won't dignify your cheap-shot critique of my work. Your guest's opinions of my work were a stark contrast of yours.

Rogerr did an excellent job for us at our company party. He was engaging, accomodating and best of all a superb caricaturist. He took soem prompts from us about attendees and used it in his pictorals and everyone loved the final product, thanks Roger for a super event.

We want to book him again!

Very professional and great at what he does. We are going to book him again to come back and draw the associates that didnt get a drawing at our party.

Everyone loved their drawings I would recommend him for party's

Roger is one of the highest rated caricature artists in the Greater Chicago area. He works live, averaging 15-20 caricatures per hour at parties, and is always willing to travel, having gone cross-country for select jobs.

Roger is a freelance artist from Chicago, Illinois. He has worked at Six Flags Great America as a caricature artist since 1996. He operated a caricature concession at Six Flags, Kentucky Kingdom in 2000, and subsequently went on to Universal Studios in Florida over the following years.

Winner of the prestigious Golden Nosey (the highest honor at the NCN annual convention and competition), Roger has accumulated 19 awards overall. Among his other awards were the Silver Nosey, Caricature of the Year, Studio Caricature of the Year, Best Color Technique, has placed second for Best Portfolio and has consistently placed in the top three for numerous divisional awards.

He can work live as well, averaging 15-20 caricatures per hour at parties, and is always willing to travel, having gone cross-country for select jobs.