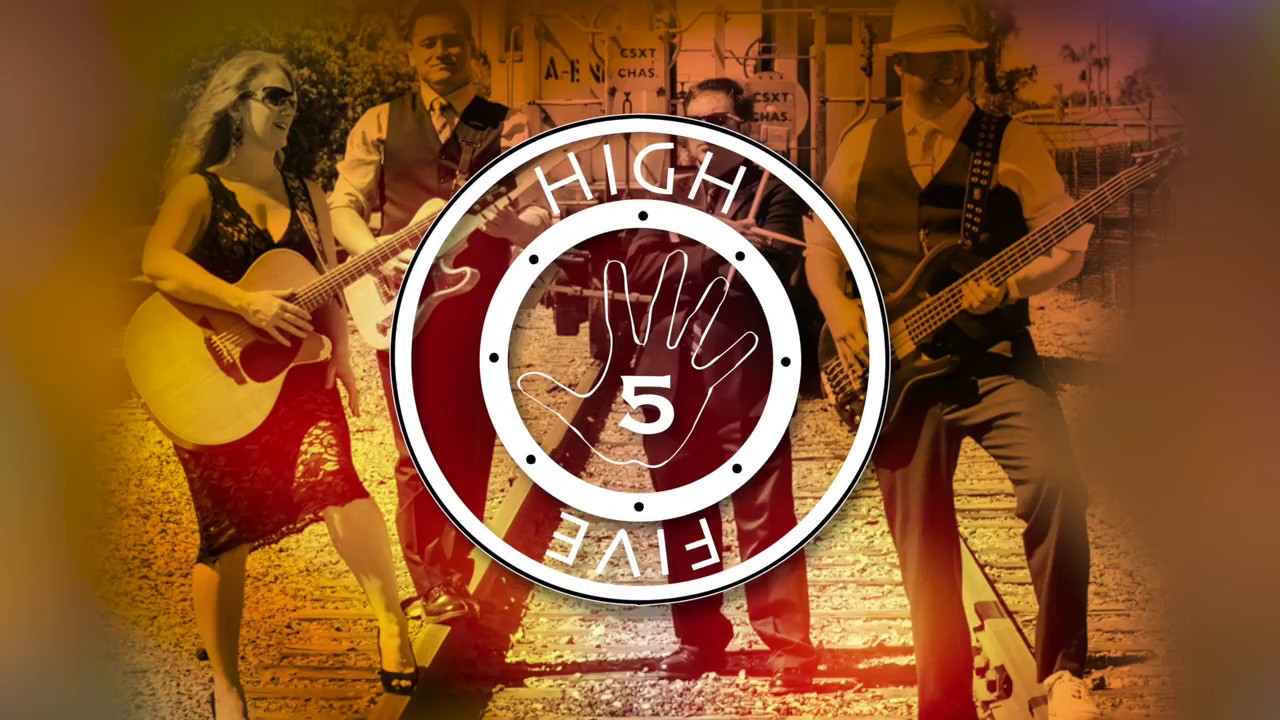 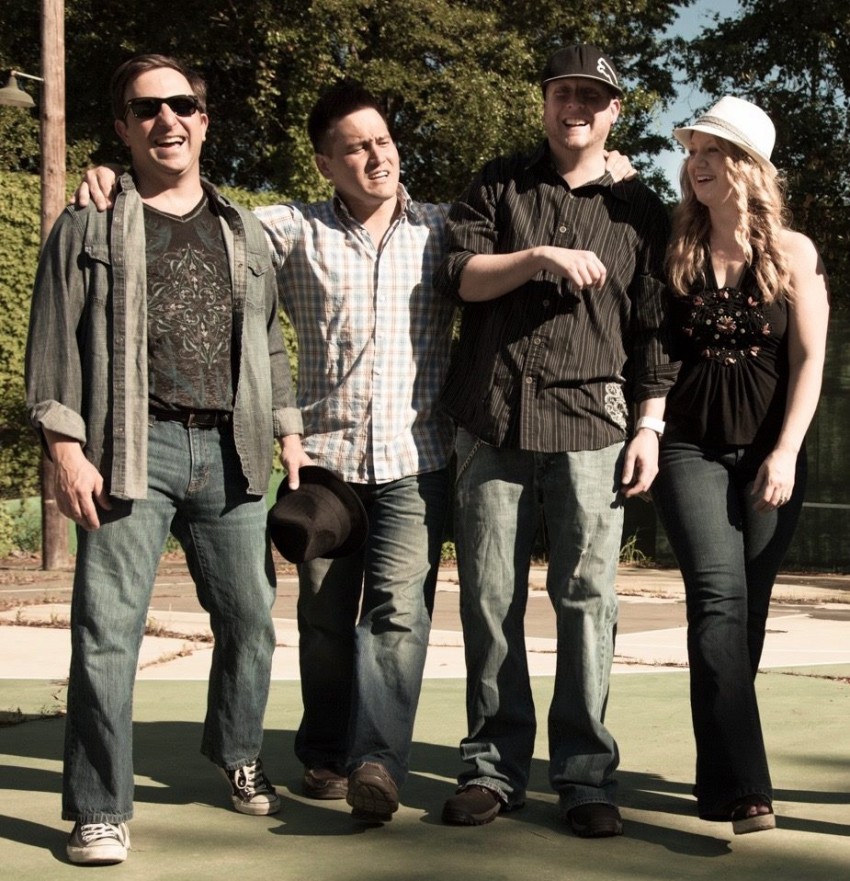 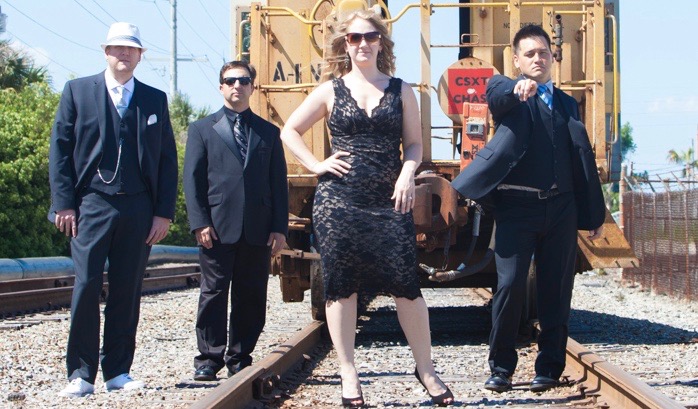 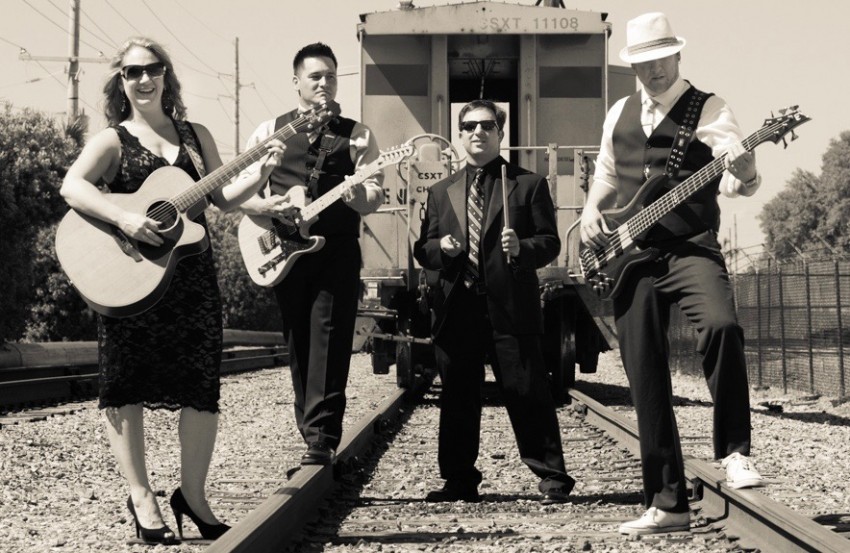 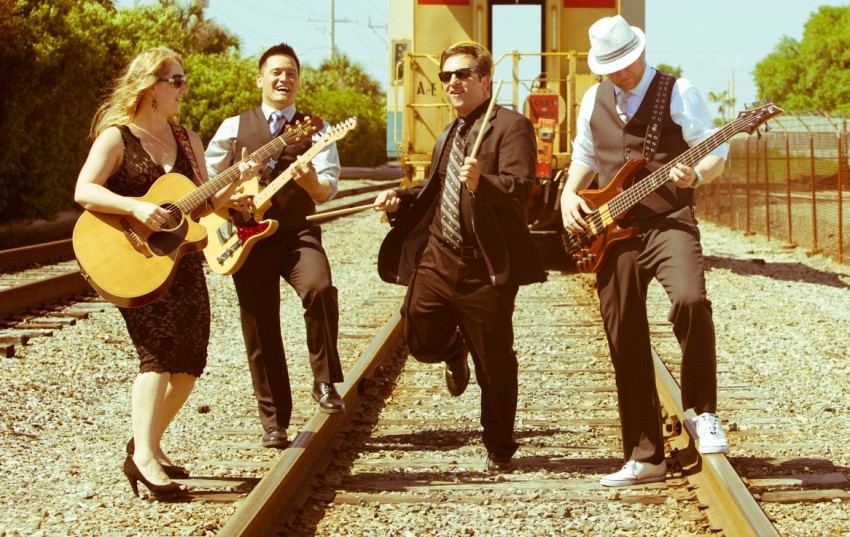 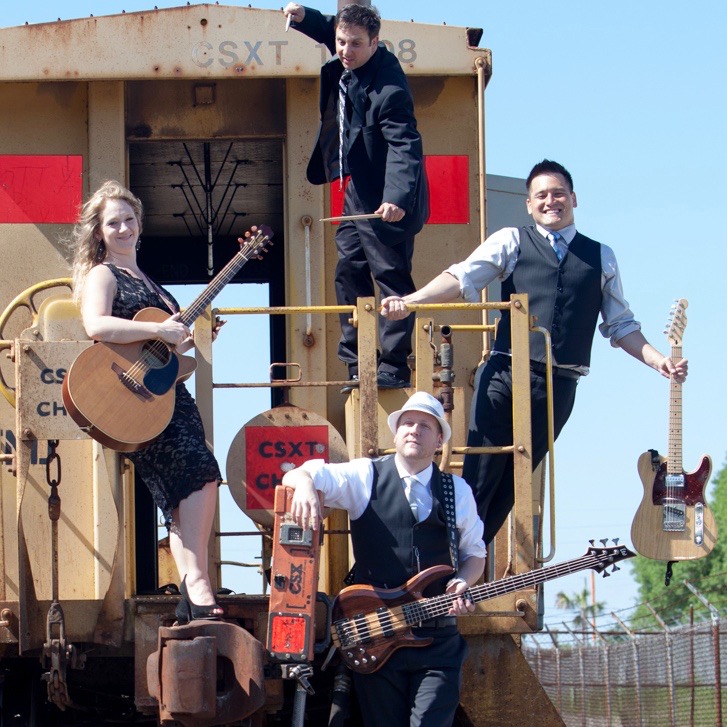 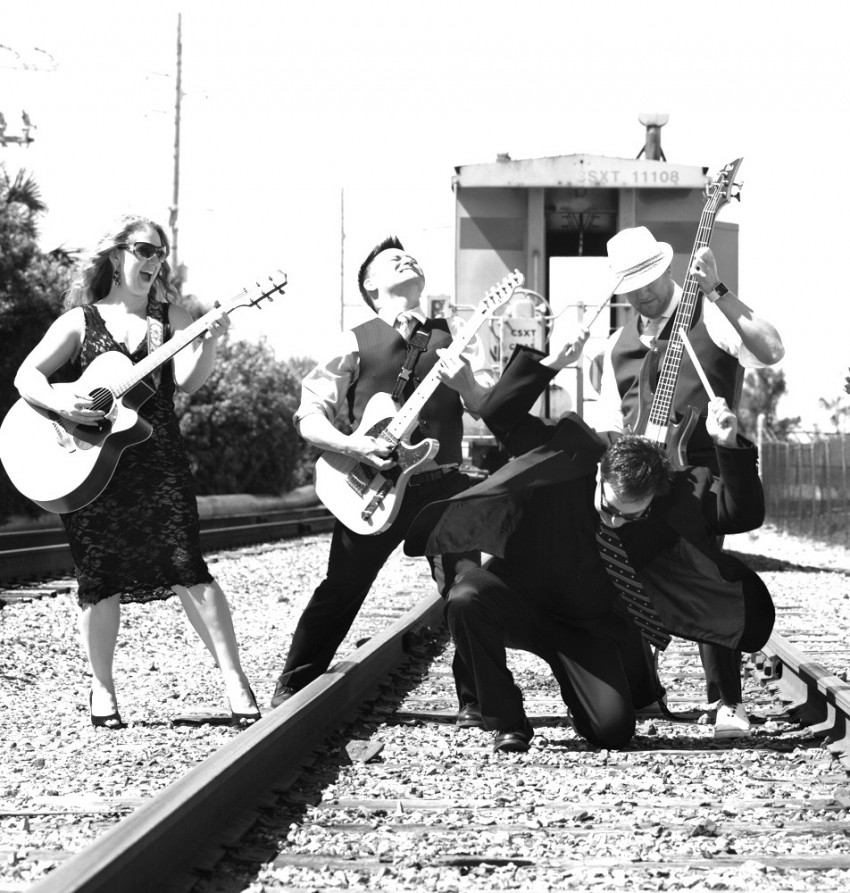 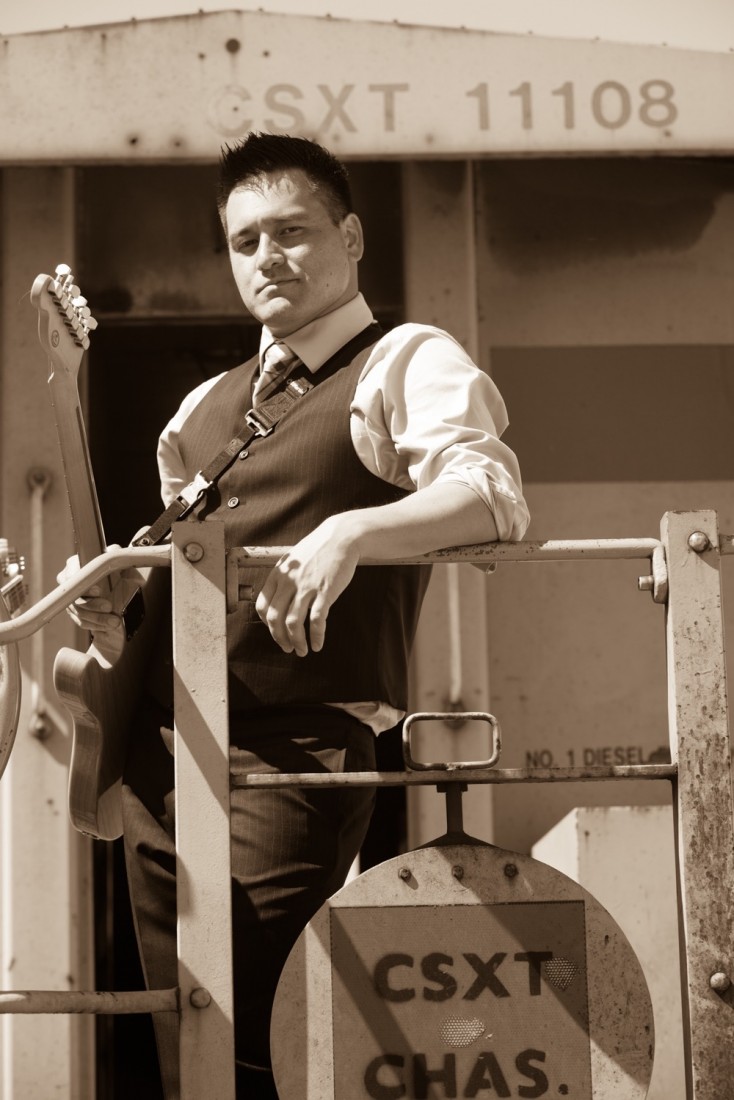 This dynamic group of singers and seasoned musicians knows how to bring the party to any event! Their extensive performance experience and vast repertoire ranging from Jazz to Country, Hip Hop and Pop, and everything in between gives them a wide variety of styles to please any crowd. High 5 plays in clubs, festivals, and parties regularly in Charleston, SC as well as many weddings and corporate events across the state. All members of the band sing lead, are multi-instrumentalists, and have the flexibility to play in many different configurations as a Duo, Trio or Quartet.

The band was awesome and my guests loved their play list which kept everyone dancing! The band was very nice and friendly.

Kept the party going through the whole event!

Our short event was anything short of a party, thanks to the band. They read the room, allowed people to socialize, but kicked it up a notch and everyone had a great time!

We really enjoyed the party with you! great people and fun times!
You asked about gratuity last night... please feel free to paypal to me @ antski7@gmail.com if you like!

"High 5 was great!! They played our preferred set list and even learned a few new songs that we really wanted to hear. Dealing with the band was easy and without headaches. Many of our guests came up during our reception and also since have told us how phenomenal High 5 was. If you have a chance, book this band!!"

"High 5 was absolutely amazing. Anthony is so easy to work with and is accommodating to any requests. We were beyond satisfied and would recommend them to anyone. I have gotten so many compliments since my wedding about High 5!"

"High 5 is an amazing band!! Everyone at my wedding raved about how great they were. They played music that all ages of people loved and danced to. We didn't want the night to end!!! I have given our their information to multiple people and would highly recommend them!"

"We definitely had a lot to ask of our band and above and beyond was provided. We wanted a band for our wedding music but my husband's family is also Armenian so we wanted some Armenian songs DJed as well. We also had the band do our ceremony and cocktail hour music. Anthony really invested his time in us and making sure everything was how we wanted it, especially with the Armenian side of it. We couldn't be happier with our music and how great they all were, and such a talented band. Wish our reception could have been longer to hear more of the band's sets! Would definitely recommend to anyone."

"High 5 with Lowcountry Entertainment Service was the perfect band for our wedding reception! All of our guests had a great time, and everyone has been asking where we found the band because they loved the music!

Anthony and the rest of the band were professional, fun, and easy to work with. They learned the songs for our dances and played just how we wanted. The band did a great job getting the crowd excited and dancing. It was really the perfect band for us, and the best money we spent for our wedding.

I've recommended High 5 to several people planning upcoming weddings and parties and will continue to do so. I just hope I have a reason to hire a band again because I would love to have High 5 play one more time!!"

"Anthony at Lowcountry was great to work with. We used High 5 for our wedding. The band was great. Good music, very professional and received a lot of compliments. They were flexible with our requests too."

"High 5 did an amazing job playing my wedding reception! We had several meetings prior to the event date and they provided an extensive lists of songs I could choose from to create my own playlist. They offered to play any additional songs if I wanted something specific. During the event they customized their set based on how I wanted my reception structured, entrance, cake cutting and toasts. The sound quality was great and the energy in the room was awesome! Everyone enjoyed dancing for hours! They were very easy to work with and affordable. I would highly recommend High 5 Band if you are looking to have the best dance party EVER at your reception!"

"High Five COMPLETELY made our wedding! Our guests had a such a blast - it was the most fun evening and celebration we dreamed of. I am still having friends tell me our band and reception was the best they've been too (and I would not say that). Our first dance was Romantic and sweet- and then the night kicked off with awesome music and fun with the Band! Our guests even started a limbo contest :) As you'll see from photos and our wedding video- the evening was nothing short of AWESOME. "

"We used High 5 Band for our after rehearsal dinner party. They were amazing. They were flexible, arrived on time, and got everyone on their feet to dance. We were told they were better than our actual wedding day band. They even learned 'our song' just for us. I highly recommend these guys! You are in a for a great time."

"I have booked High 5 for a couple of events over the past years. They are very prompt with their communication, have an awesome song selection, and are very professional to work with. I highly recommend them to anyone seeking a band for great value for great entertainment. They really know how to keep the party going! "

After winning two state championships with the Walterboro High School Band Blue, Anthony would go on to The Citadel as part of the Bagpipe Band and Bulldog Orchestra (Big Band Swing). Upon leaving the Citadel, Anthony would finish his studies at the College of Charleston in 1997 in Elementary Education. During his college days and few years after, Anthony beat the skins in a variety of bands; C5 from Walterboro, The Rhythm Method from Charleston, and many other bands. Since the early days of being a drummer, Anthony has always been a true professional in making great music and being a team player. Being versed in Jazz, Blues, Alternative, Hip Hop, Classic Rock, Funk, Soul, Motown, Anthony brings the ability to play what the band needs without skipping a beat! Anthony met Corinne Gooden as a new drummer a few years ago in the band Palmetto Soul. After a three year run, they decided to play more modern music and became High 5. Anthony has a son and a daughter who he loves more than life itself. They live in West Ashley. Rock on!

Jason began playing guitar during his junior year of college at West Virginia University. After graduation in 2006, he moved to Charleston, South Carolina to begin his career as a Software Engineer. It was in Charleston that Jason met Glenn Miller. At the time, Glenn was the drummer for the Classic Rock/Zydeco band, Henry's Attic. Glenn and Jason began collaborating and formed the alt/rock band, Category 6. Due to a difference in vision, Category 6 dissolved and it's members went their separate ways. Prior to joining High 5, Jason was a founding member of the Pop/Rock band City Station.

Jason enjoys listening to Country, Pop, and anything 90's. He loves playing his PRS CE 22 and Fender Standard Telecaster through a '65 Fender Deluxe Reverb Reissue. In his free time, he enjoys boating, fishing, golfing, and engine repair.

Originally from Hendersonville, North Carolina, Corinne has a diverse musical background, and has been teaching and performing professionally for over 20 years. She began her career in musical theatre at The Flat Rock Playhouse. During high school she toured around the country as a dancer in Hoctor’s Dance Caravan, attended the NC Governor’s School in their Choral Music program, and was the first-chair trumpet player in the symphonic and jazz band.

Corinne received her BFA in Musical Theatre from FSU, and has played several leading roles, including Sarah (Guys and Dolls), Maggie (A Chorus Line), Yonah (Children Of Eden), and Liesl (Sound of Music). After college, Corinne sang at Disney World in Orlando, FL, with Voices of Liberty, and toured with hip-hop group Raination, opening for The Black-Eyed Peas, Kanye West, The Roots, Jimmy Cliff, Ludacris, etc.

In 2006, Corinne received a degree in Audio Engineering from SAE (New York/Nashville), and worked under Rick Giles (#1 hit songwriter for Reba McEntire, Rascal Flatts, etc.), as a recording and mixing engineer. She recorded and co-produced an album of her own original songs, “All My Days”, available on iTunes.

Corinne currently plays over 165 shows a year, is the founder of the Palmetto Music Project, and teaches voice, guitar, and piano lessons out of her home and at Wando High School. She teaches music in all genres, including musical theater, opera, rock, pop, jazz and country.

Born in the small town of Abilene, TX, Glenn emerged himself in the music scene at an early age by banging on anything he could find and playing his mom’s piano and organ in the house. Glenn grew up surrounded by a talented musical family with his mom being a professional pianist/organist, his dad a choir singer, and his brother a jack of all trades.

Glenn started getting serious with music when he and his family moved to Charlotte, NC in 1986. He joined the school band in 5th grade playing the alto saxophone. Glenn rose through the ranks quickly landing 1st chair and remained there all throughout high school. He also explored more avenues of music during school by joining the high school marching band and jazz band where he was the solo bari saxophone player. During this time he and best friend Tedlee-T formed his first band called Yuba Gold, a rap group with sick beats and killer synth sounds and played several parties and variety shows throughout high school and college.

Glenn moved to Charleston, SC in 2002 and prior to joining High 5 he has played in several successful bands playing both covers and originals such as Henry’s Attic, Category 6, The Remedy, County Line Strangers, Loners Society, Corinne and The Resolution, and City Station. He has played multiple roles within these bands as a drummer, bassist, guitarist, alto/bari saxophonist, and both backup and lead vocalist. Glenn is very passionate about music. He enjoys a wide variety of genres including altertnative/grunge rock, hip-hop, heavy metal, industrial, electronic, drum and bass, pop, oldies, and classical music. Rest assured, Glenn will be listening to, creating, exploring and playing music for the rest of his life.