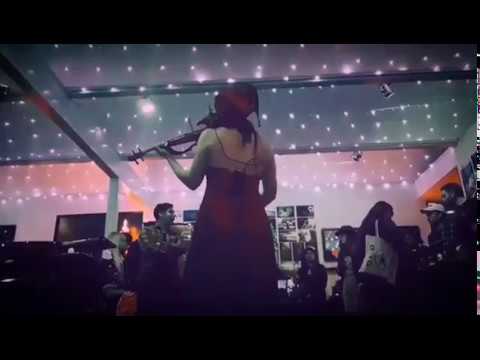 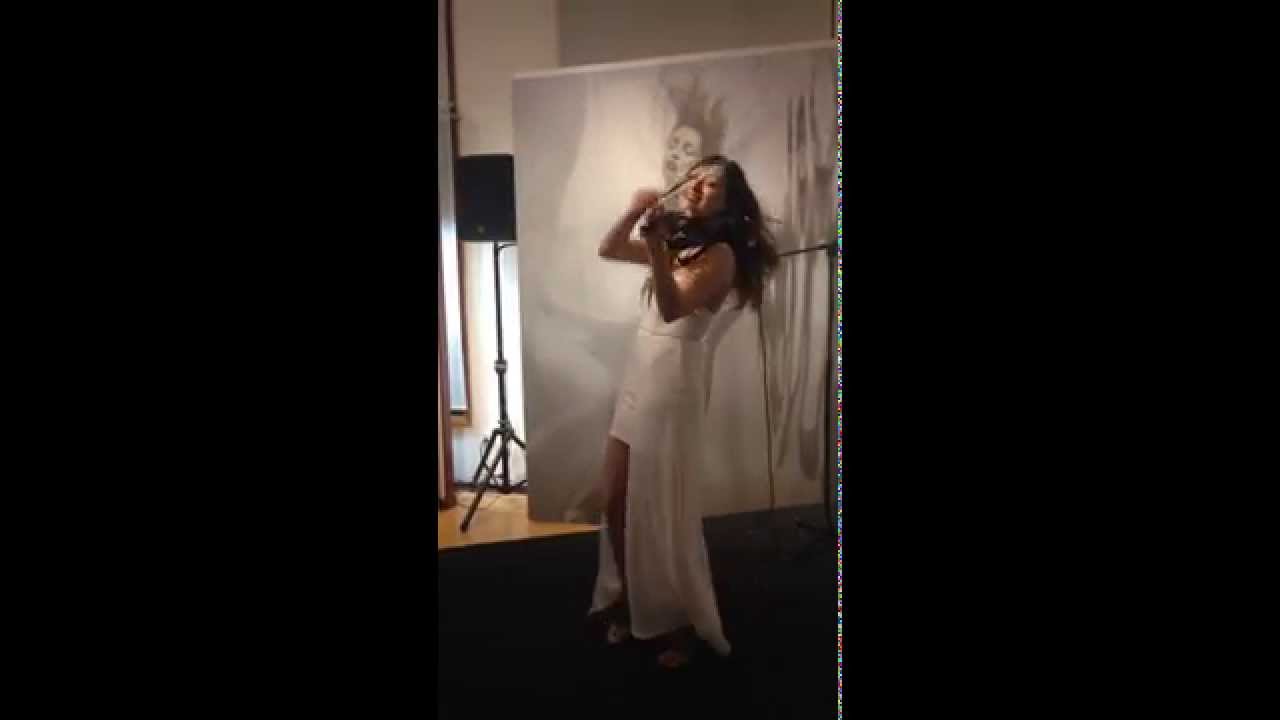 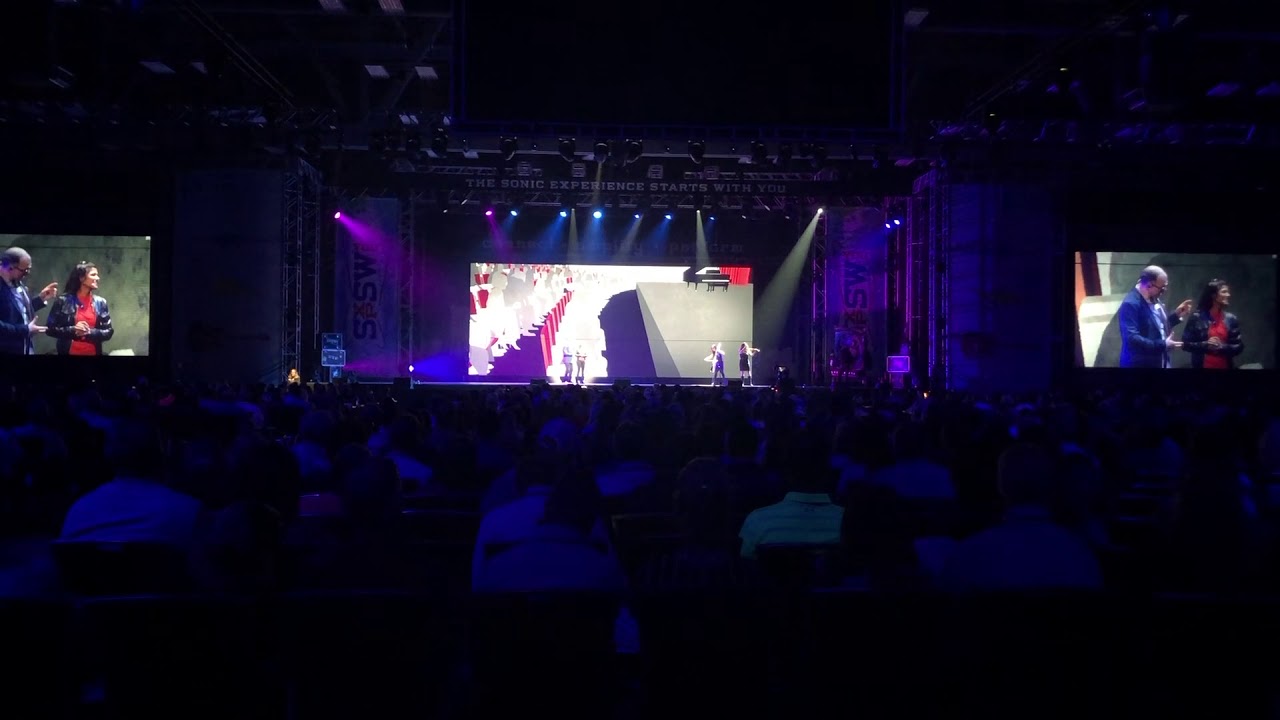 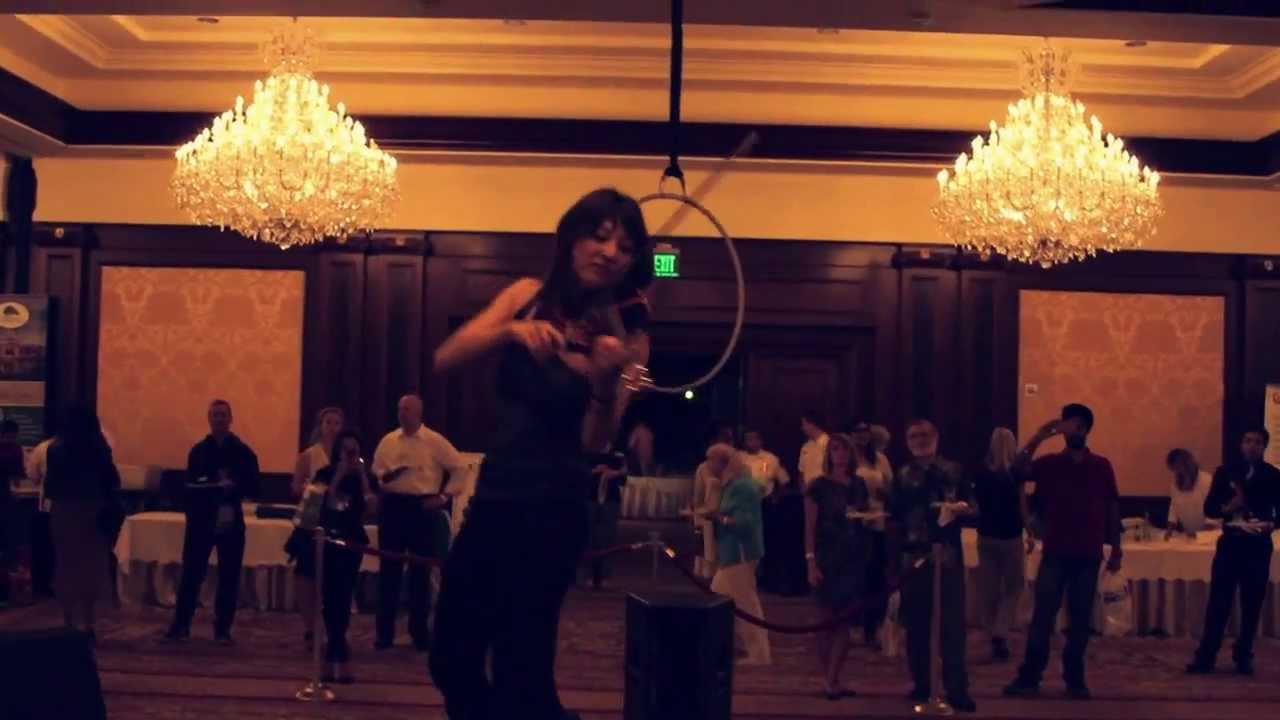 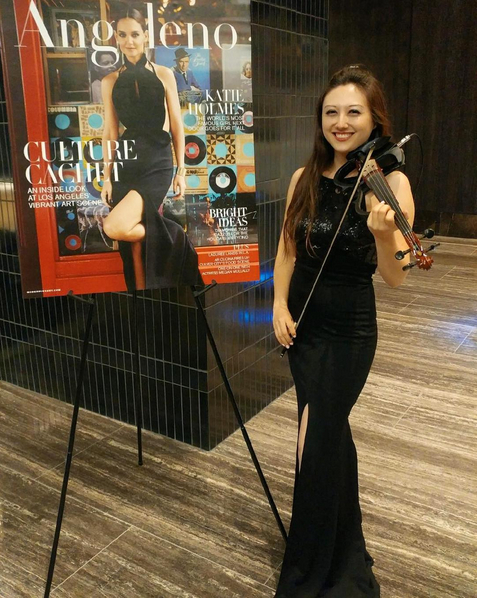 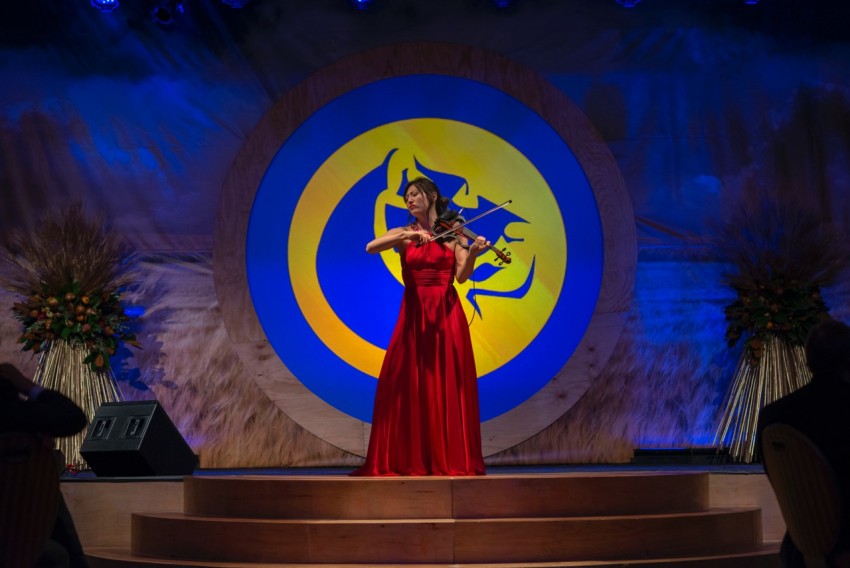 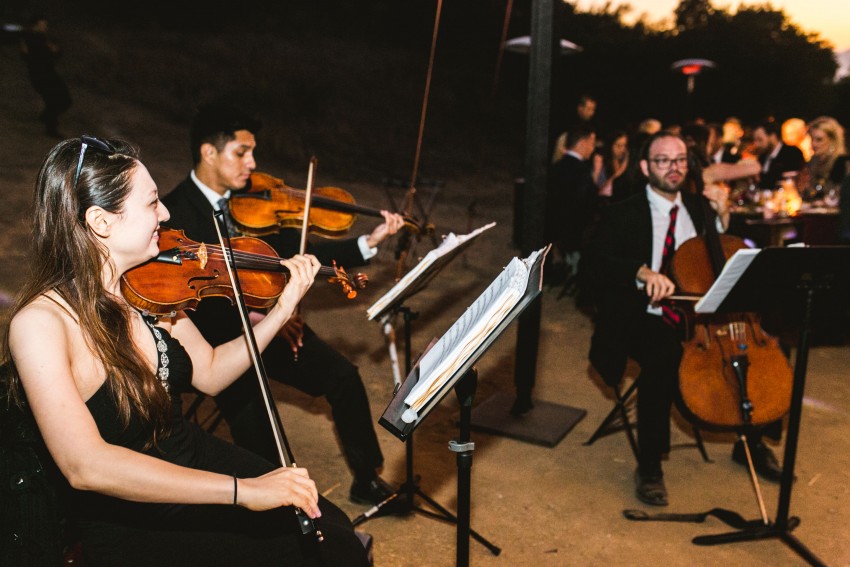 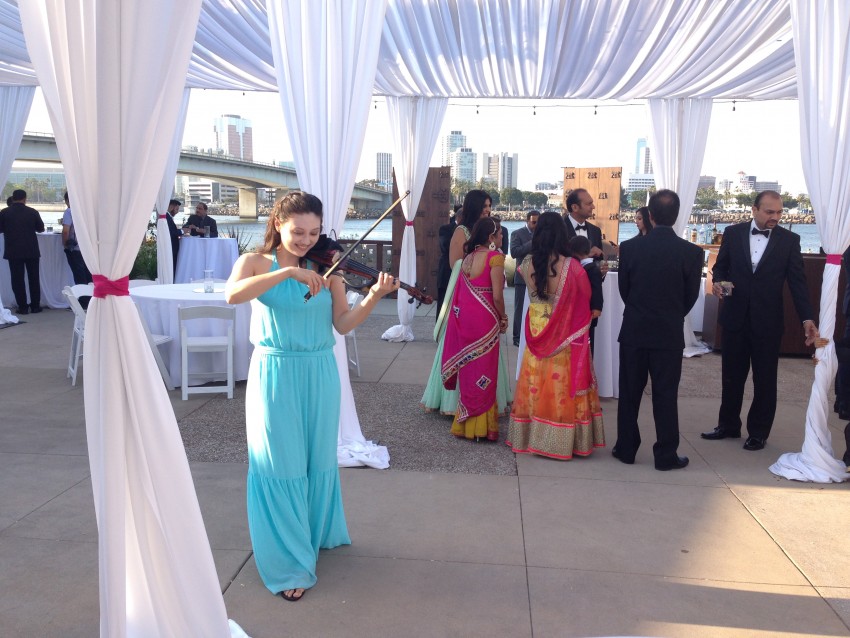 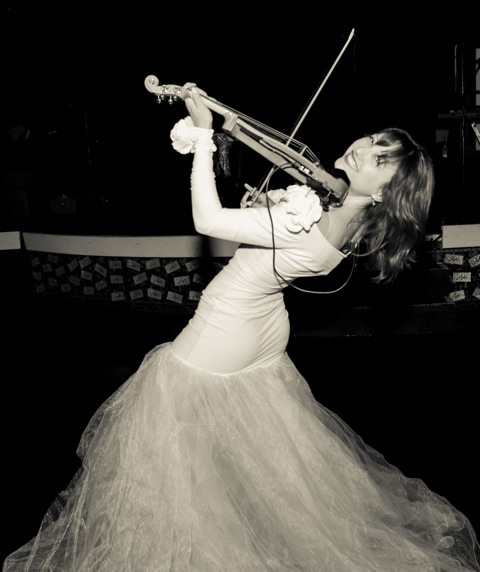 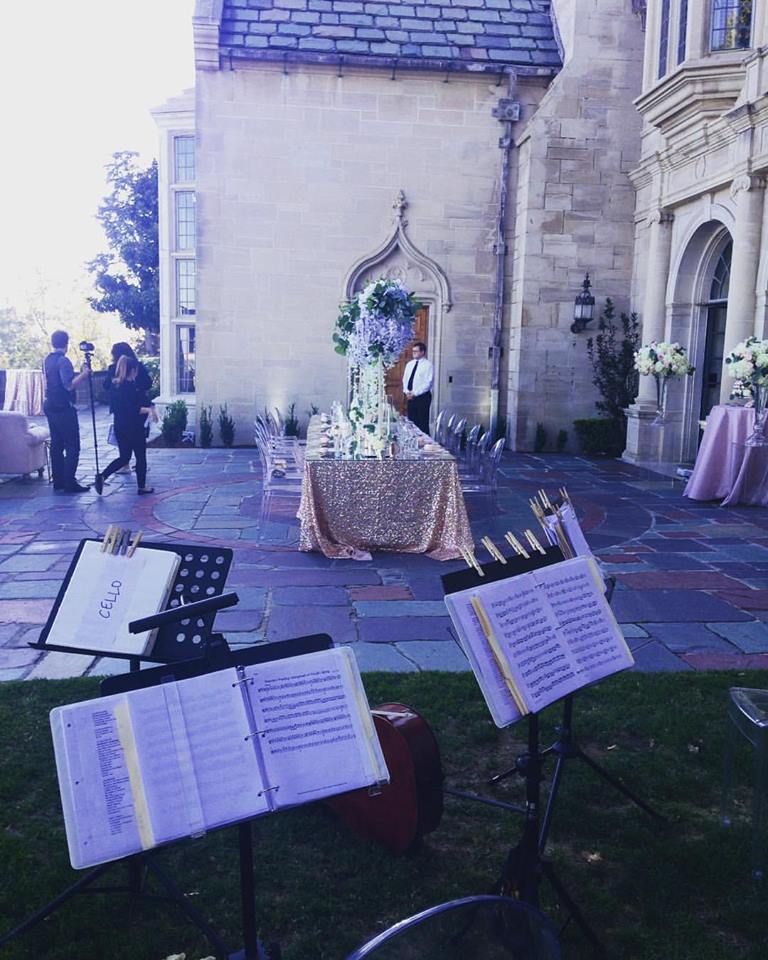 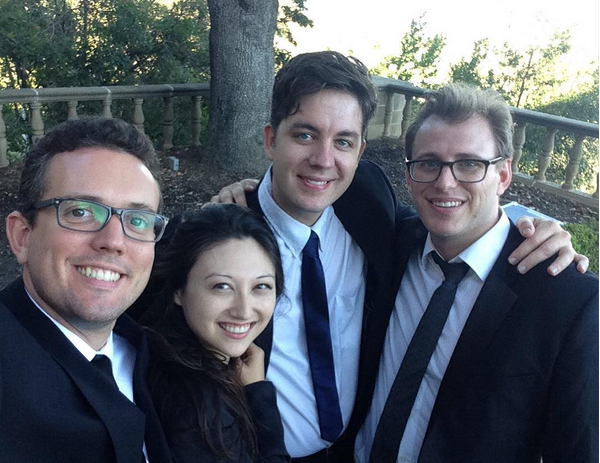 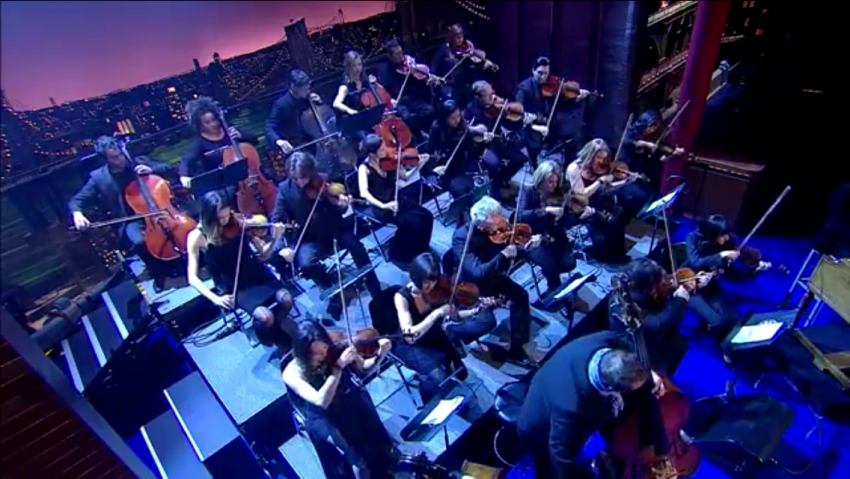 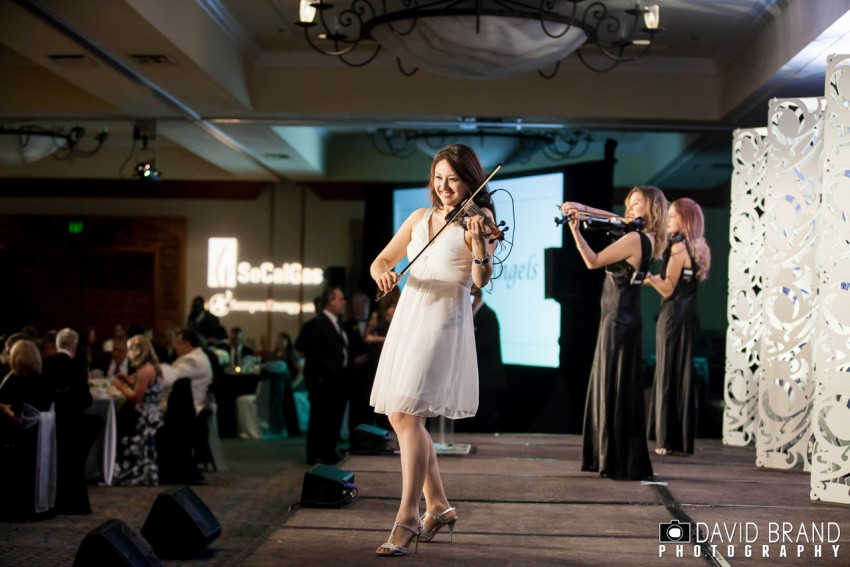 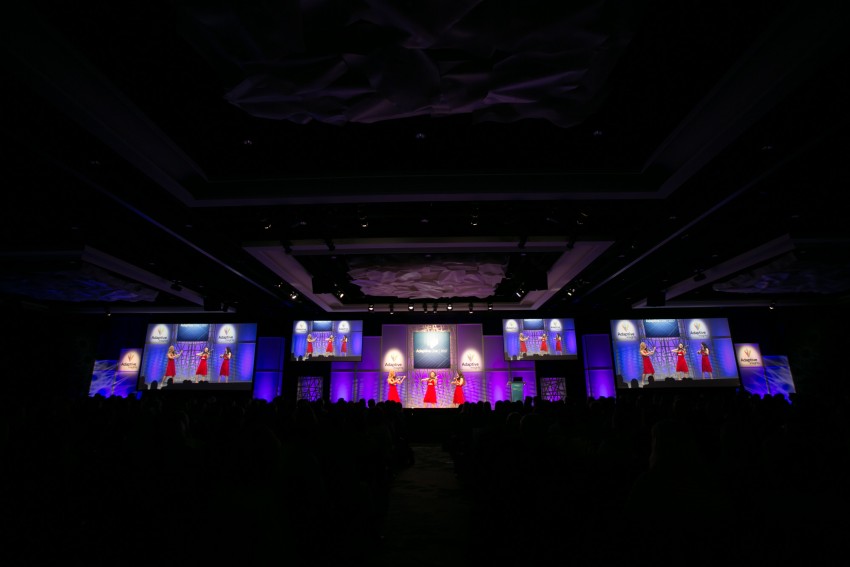 Hi! I am a Juilliard graduate with an international performing career and experience with 10+ years of weddings as well as recording on movie, commercial/tv soundtracks and performances live on television. I continue to perform for corporate engagements, weddings, and private parties, with a variety of classical and pop music to choose from. If you prefer an ensemble, I also play with many of LA's finest musicians, and would be happy to provide a sample music list to fit your style.

Like many wedding couples of 2020, we were on the fence about proceeding with our wedding. We had already postponed once and were on the verge of outright cancelling the wedding. Once we made the decision to move forward, we had to scramble to make some last minute plans.

We knew we had wanted a violinist for the ceremony/cocktail hour. We reached out to Elizabeth after seeing some videos of her performing at weddings. She was promptly responsive and super easy to talk to; she spent nearly an hour going over all the details of the booking with us and answered all of our questions. The process of booking her was seamless. Once booked, we discussed song choices and connected her with our DJ. The ease at which she explained things with us before booking, and discussed plans with the DJ alleviated some of the stress of planning the day.

As for the performance, she arrived early for sound check, performed every song exactly as we wanted it, and all of our guests had nothing but amazing things to say about the music not only during our walk down the aisle, but also during cocktail hour. She was amazing, and we had a wide variety of song requests including classic songs and even some movie/show favorites (Star Wars, GoT).

All in all, it was a pleasure to hear her perform; she exhibited friendly professionalism throughout the entire process and was super easy to work with. 10/10, we will definitely book her again for future events.

Violinist for our wedding.

We hired Elizabeth for our leap year wedding on February 29,2020. Elizabeth was absolutely amazing. She was very professional and did such an amazing job. We absolutely loved her and our guests praised her as well. We are very happy that we hired her and she made our wedding even more perfect. We highly recommend her. Thank you Elizabeth ;)

On time and prepared, excellent playing, included the song I requested. 10/10.

Elizabeth B was completely professional and interactive throughout the early origination planning process. A wonderful violinist and person. Our lovely wedding was enhanced by her presence and performance. Her attention to detail and response to the little details was exceptional and Adelaide and I would use her terrific talents again for other events? Thank you so much. Christopher Pluck

So amazing!!
All our guests loved her!

So sweet and professional. Would book her in a heartbeat again. Played the violin beautifully.

Elizabeth was a pleasure to work with. She was incredibly professional and delivered a beautiful evening of music. Would highly recommend.

Elizabeth provided beautiful, heartrending solo violin music for my wedding, setting the tone for a romantic and meaningful ceremony. She performed Beatles music for the processional and recessional, as well as a selection of other melodies as guests first began to arrive.

Elizabeth was a professional throughout the entire process. My husband and I highly recommend her!

As a solo performance: captivating music to entertain your guests, make your wedding day memorable, and a modern yet elegant performance. Clients can book solo electric or acoustic violin, but also a duo, trio or quartet, or performance with DJ. Dance moves combined with music that you would hear with a DJ to wow your guests or a strolling performance of solo violin roaming through the event space with lounge music for a contemporary and exquisite cocktail hour.

Ensembles for background music and weddings: Styles includes traditional classical genre, a mix of popular arrangements from various decades, light classical, and some special arrangements based on the event. For a more comprehensive song list, please request and if possible, indicate music style preference. Groups include a duo of two violins or a duo of violin and cello, a trio of violin, viola and cello, and a quartet of two violins, one viola, and one cello. The ensemble musicians include some of LA's finest studio musicians, and many special requests can be accommodated.

Music to set the scene or make an impression your guests won't forget with a feature performance!

A graduate of The Juilliard School, Elizabeth Bacher was born in New York and began playing music at the age of 3. Her talent was soon discovered and by the age of 8 she had already performed as a televised national prizewinner on the piano and soloist with an orchestra on the violin. Gaining international exposure at an early age, she attended a specialized music school in England and studied with major teachers from Russia, Germany and Israel. She graduated with a Masters degree from The Juilliard School, and has performed in various international settings such as the Royal Concertgebouw in Amsterdam, Salle Gaveau in Paris, the Academia di Santa Cecilia in Rome, Carnegie Hall, and the Konzerthaus in Berlin. She has also been featured on radio shows in the US and abroad as a violinist and pianist and been the recipient of numerous awards and scholarships. Before leaving New York City for Los Angeles, she performed a full solo violin and piano recital in Carnegie Hall including the premier of a special commission for Dan Tepfer called Solo Blues, written to be coordinated as violin and piano by one person simultaneously, live.

Elizabeth now lives in Los Angeles and enjoys collaborating with other artists, finding herself in a variety of settings live and on film. She performs nationally in the corporate electric violin trio The String Angels and the Jingle Punks Hipster Orchestra. Recent public performances include concerts with Sarah Brightman at the Dolby Theatre and contracting and performing Final Fantasy: A New World at Zipper Hall. In addition to public performance and corporate clients, she has vast wedding experience as a contractor in New York and Los Angeles. She has played for various celebrity weddings, including the wedding of George Lucas and Melody Hobson at Skywalker Ranch.

Elizabeth's ensembles are trained in both classical and popular genres. The players are each accomplished soloists in their own right. Their extensive live performing experience in addition to television and film includes Dolby Theatre, Hollywood Bowl, Staples Center, Saban Theater of Beverly Hills, El Rey Theater, Nokia Theater, and Disney Hall among other international venues. Elizabeth has taught students of all ages, from 5 to 65+ and prepared high school students for successful conservatory and preparatory division auditions.

For all potential outdoor settings: Area protected from inclement weather and direct sunlight without exposure to extreme temperatures, which can be damaging to instruments. *Acoustic instruments are more sensitive to temperature and sun than electric instruments. If you have an outside event and are not sure, please ask me!

For electric violin performances, a PA system or comparable speaker system and adequate power supply. PA can be provided: please indicate approximate guest count and dimensions of the location.

Please note there is a nonsmoking policy in all performance areas.