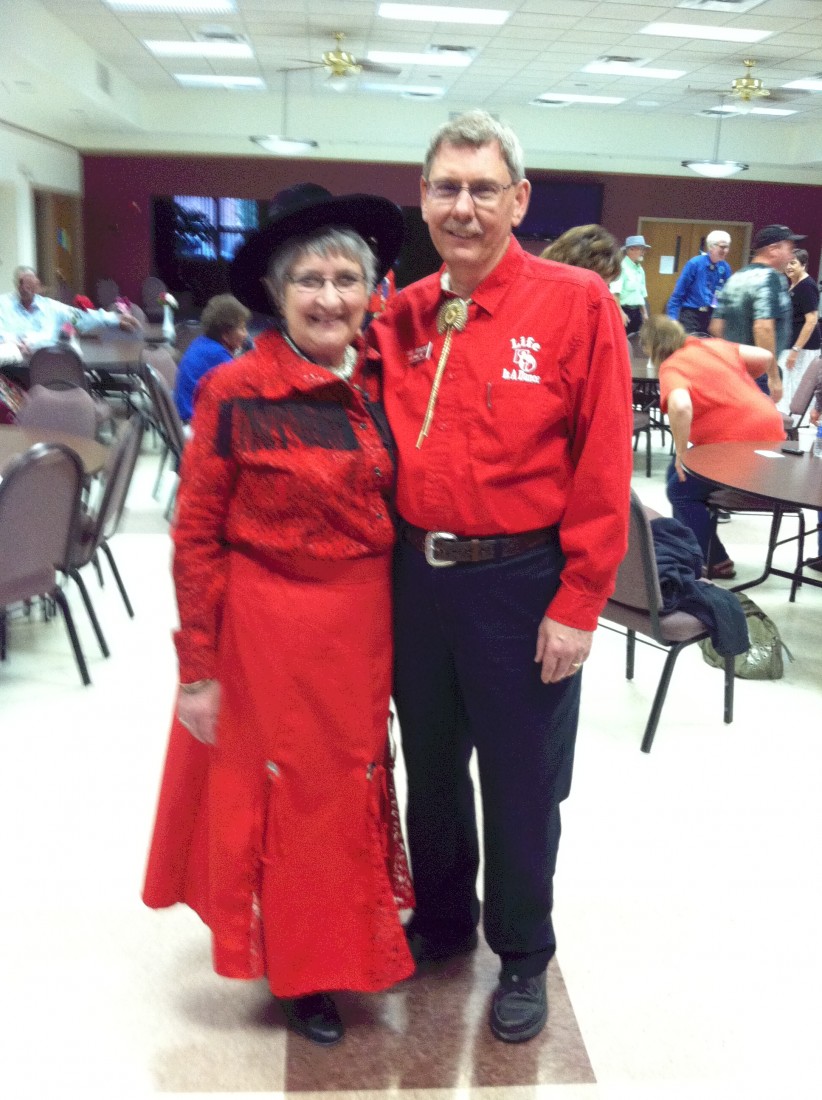 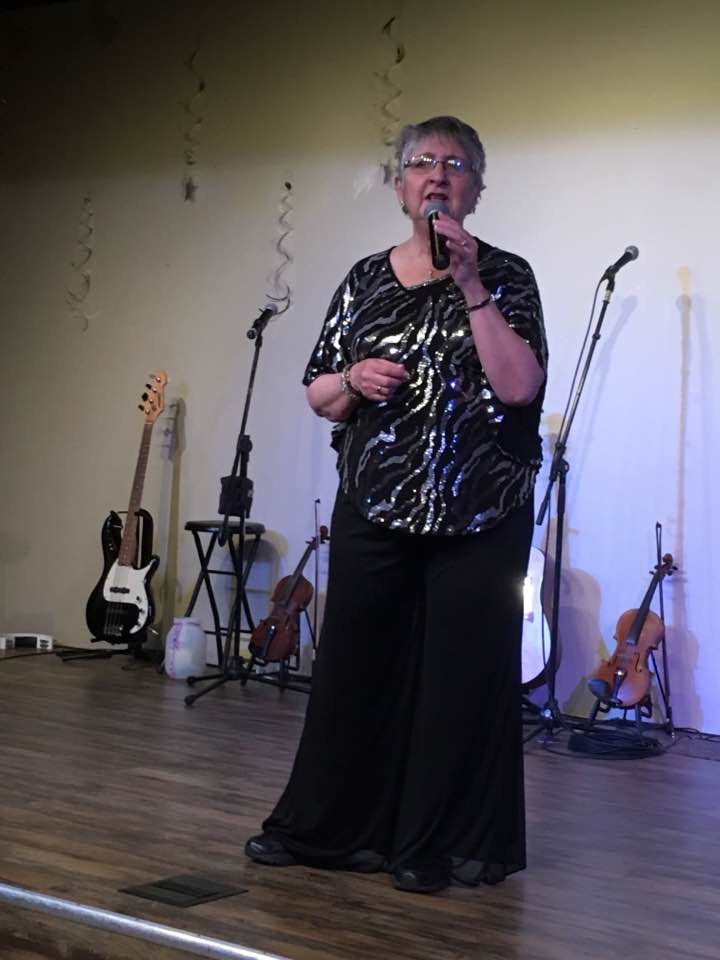 Performance at theater in Vegas! 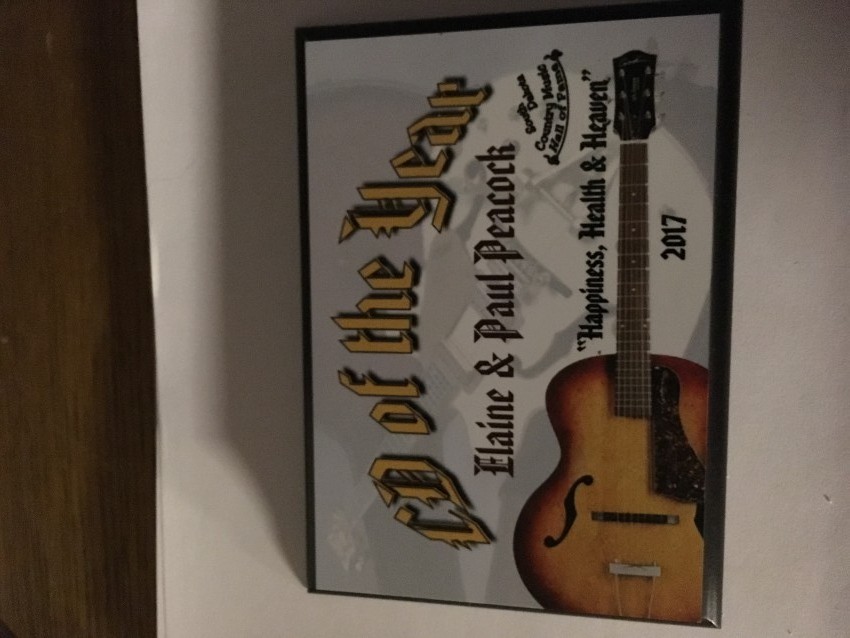 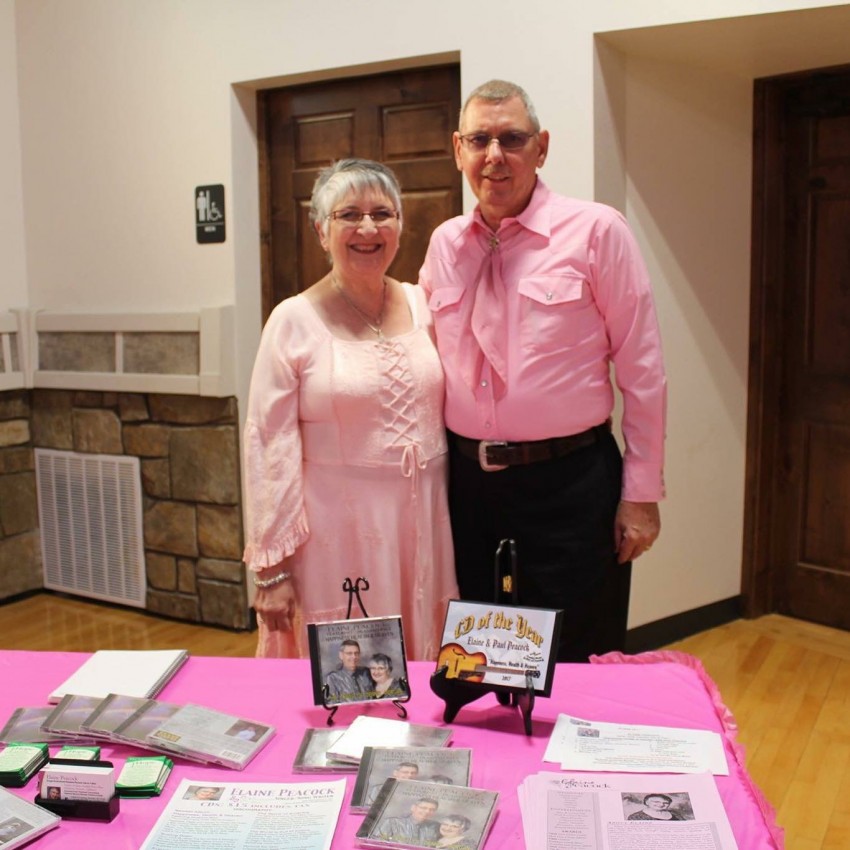 Paul and I at a Pink Posse breast cancer fundraiser!

Elaine Peacock is a talented performer and a professional entertainer… she is the “real deal” Elaine offers a variety of music - Country, Gospel, Childrens’, Christmas, Patriotic; you will enjoy her Patsy Cline tribute! She is a square dance Caller/instructor! A breast cancer survivor, she shares her journey of hope! An award-winning singer/songwriter, 2009 Nat’l Traditional Country Music & 2010 South Dakota Country Music Hall of Fame Inductee, she sings at numerous churches, fairs, women’s events, city events, Country/Christian music festivals, retreats, and corporate events. Elaine has recorded 8 award winning CDs. She is a highly sought after entertainer-book early!

First I got to meet Elaine and husband at an Elk Point function and later I was asked to PERFORM with her at the Embassey Care Center, Sergeant Bluff. It was a true JOY and BLESSING as Elaine is so easy to get along with, flexible with her laugh, and able to RELATE WELL to her audience. I strongly recommend her and her husband's program. She is so very nice!!

Elaine shares her journey through her breast cancer diagnosis, treatment, and now survival. she shares her faith and inspiration, the support she received from her spouse. She sang many tunes and had the crowd tapping their toes! Thank you Elaine for a wonderful time!

Thank you so much Karey for inviting us!! We enjoyed being with you all for your awesome breast cancer fundraiser ladies night out! Thank you for everything!! God bless you all!!

At our Nebraska State Knights of Columbus Convention, a large audience of all ages enjoyed Elaine's music, but it was the afternoon ladies' program that impressed me the most. Elaine shared her faith story with stories and her music, speaking to the hearts of the women there. Elaine is so much more than a singer and entertainer, she is a beautiful witness to her faith and to the miracles God has worked in her life. Her music is truly her ministry and I look forward to working with her again.

Laurie Tony and Knights of Columbus! Thank you so much for your invitation to share my music and faith! It was an honor and We had a wonderful time!! I too look forward to working with you again! What a blessing you are!! Thank you for blessing us!!

I booked Elaine for our First Class Club gathering in February. We had to reschedule because of weather which she worked very closely with me to reschedule. We had our event on February 29 at the Canton Depot. Elaine provided a wonderful blessing prior to our meal. She then provided an hour of musical pleasure for our 60 guests. Elaine included our audience and selected music which everyone recognized. I would highly recommend Elaine. She has a variety of music to share. Our gathering was geared toward the retired generation and everyone was singing and clapping. Hope you book Elaine and enjoy her gifts.

Thank you so much Shawn for inviting me to entertain for your group! It was such a wonderful time and it was great to meet all of you!!! Thank you for your positive recommendation and kind words! I look forward to working with you again!!! God Bless You all! Elaine Peacock

Elaine is a full-time professional, experienced vocalist, entertainer who enjoys sharing her talent, joy, love of a variety of music; and, the Lord, through singing, ministry, speaking and performance.
An award winning singer/songwriter, Elaine has performed at the Iowa and Nebraska State Fairs; So. Dakota State Fair and Sioux Empire Fair; County Fairs - Turner, So. Dakota; Plymouth, Iowa; and York, Wayne, Colfax, Cumming, Nebraska; LIFE LIGHT, Siouxland Freedom Fest, Nebraska Christian Music Festivals; 2014 Red Power Roundup International Harvester Nat’l Convention, Mitchell SD Corn Palace Festival, Bar None Cowboy Church, Newton Iowa, Buffalo Roundup & Arts Festival, Custer SD to name a few! She saw one of her dreams come true when she performed on the stage of the Grand Ole Opry during a national Country music competition and when she performed in Branson.
Elaine also acts as a promoter/coordinator of shows and fundraisers, such as the Annual Heritage Music Fest in Elk Point, South Dakota.
A licensed square dance caller/instructor, Elaine can add a little do-si-do to any event with a variety of square dance music. For audience participation, she can even teach an introductory square dance.
Elaine is a Breast Cancer Survivor who shares her journey of hope at cancer awareness and fundraising events with her testimony and songs.
Elaine enjoys spending time with her family, reading, traveling, dancing, and singing with her husband, Paul. Her faith in God is the foundation for her life and she trusts in the plan He has in mind for her — Jeremiah 29:11.
She has recorded and released seven CD’s— “Country Rose Praise”, at Gene Breedon Studios, Nashville, TN which includes favorite and original gospel hymns; a Patsy Cline Gospel Country at Dave Russell’s North 40 Studios, Sioux City, IA; “Smiling Down”, “Everyday is Christmas”, and “Spirit of America” with original Gospel, Christmas and Patriotic songs written or published and produced by Nashville Hall of Fame songwriter, Dennis Morgan, who wrote “I Was Country When Country Wasn’t Cool and George Strait’s hit “River of Love”. In 2009, she recorded a children’s album “The World is Full of Colors” and a traditional gospel album. “Hymns for Him” with Dennis! Dennis selected Elaine after hearing her on a Christian radio station as he was traveling through Sioux City, Iowa in 2005. He called and offered her the opportunity to record his gospel songs, which was one of many answered prayers. She hopes to record two new cds in 2015!!!!
An award-winning singer/songwriter and 2009 National Traditional Country Music Hall of Fame & 2010 South Dakota Country Music Hall of Fame Inductee, she has sung at numerous churches, county and state fairs, women’s events, city events, Country and Christian music festivals, retreats, receptions, cancer and corporate events.