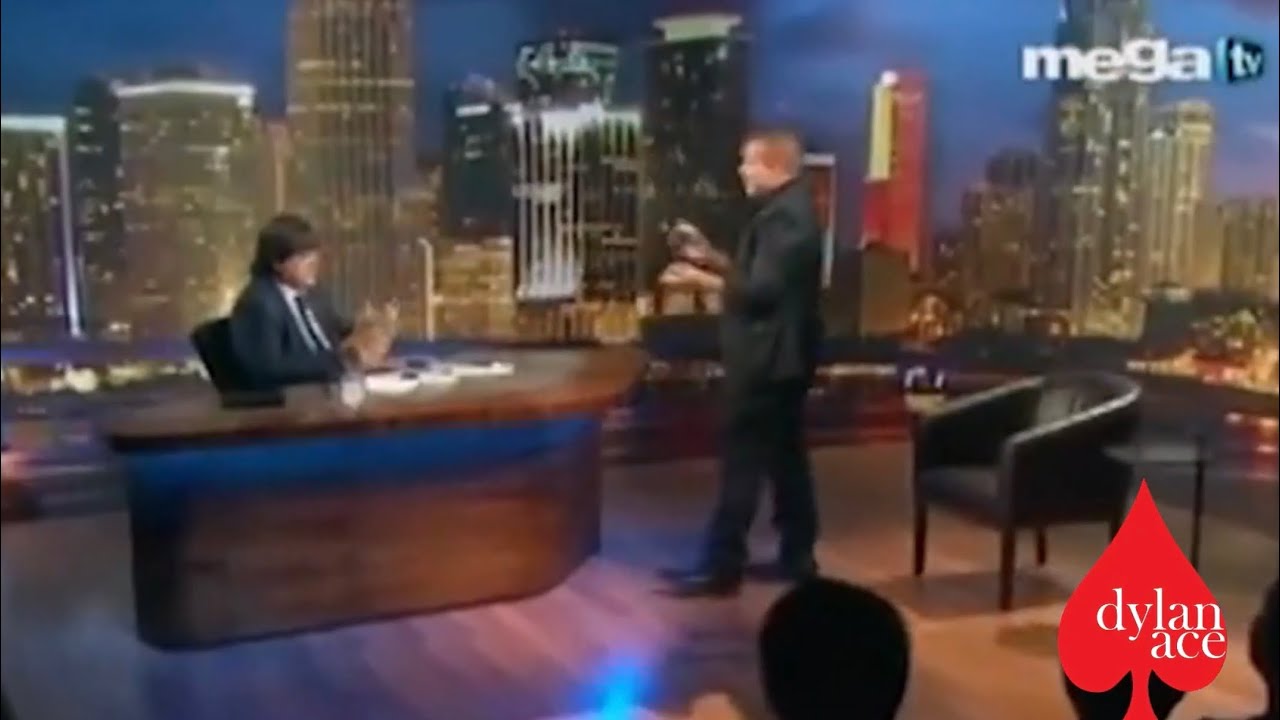 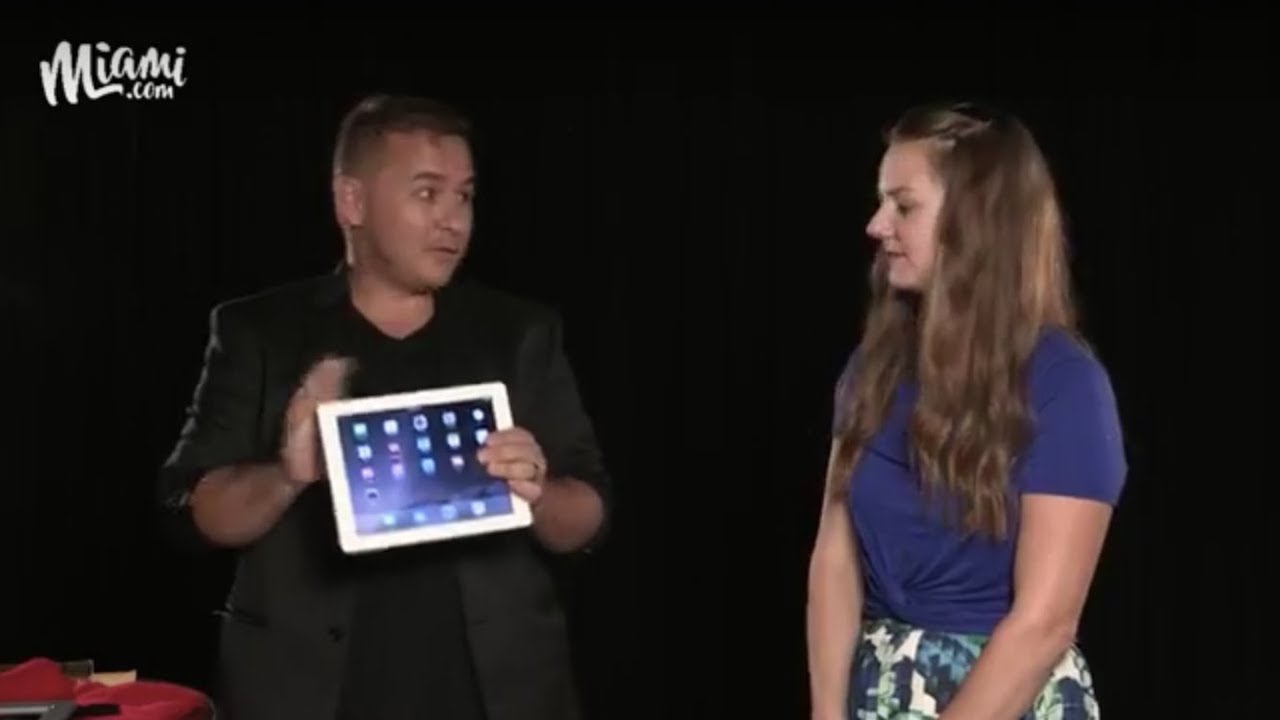 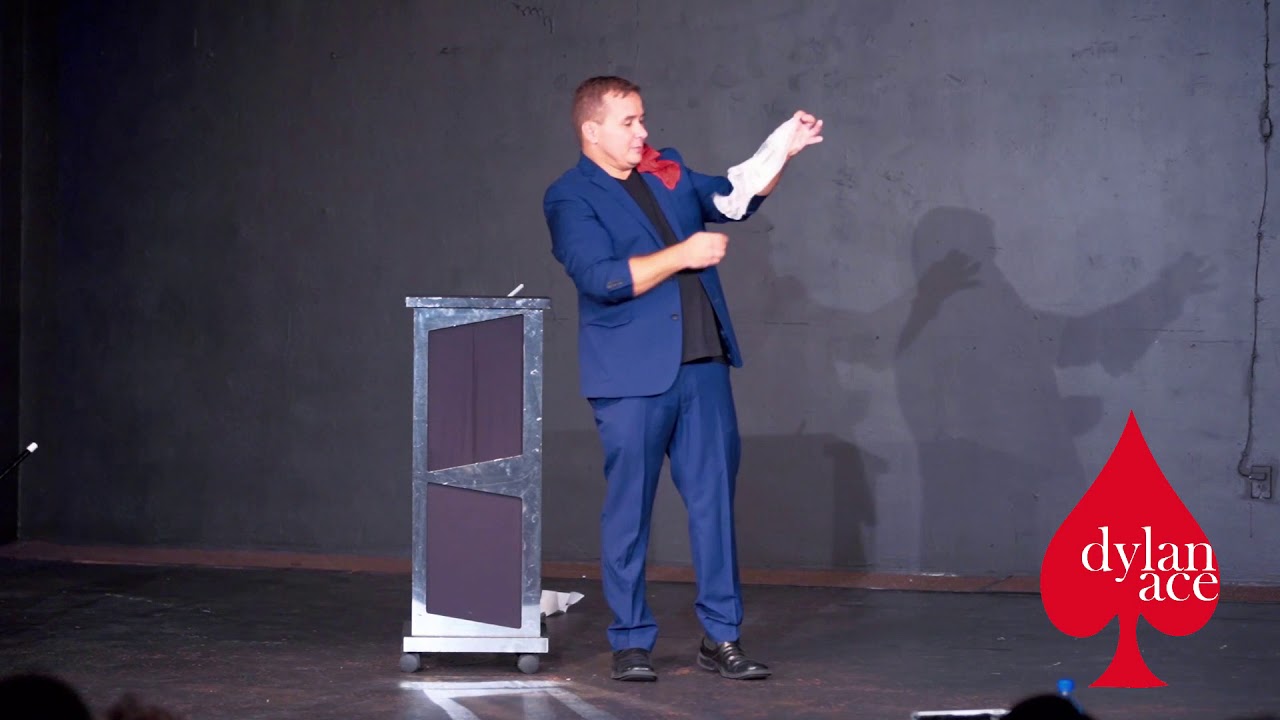 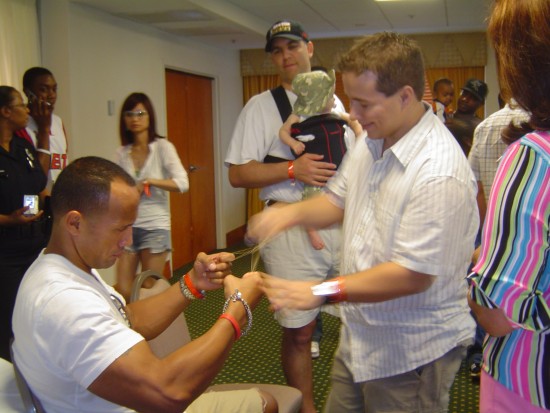 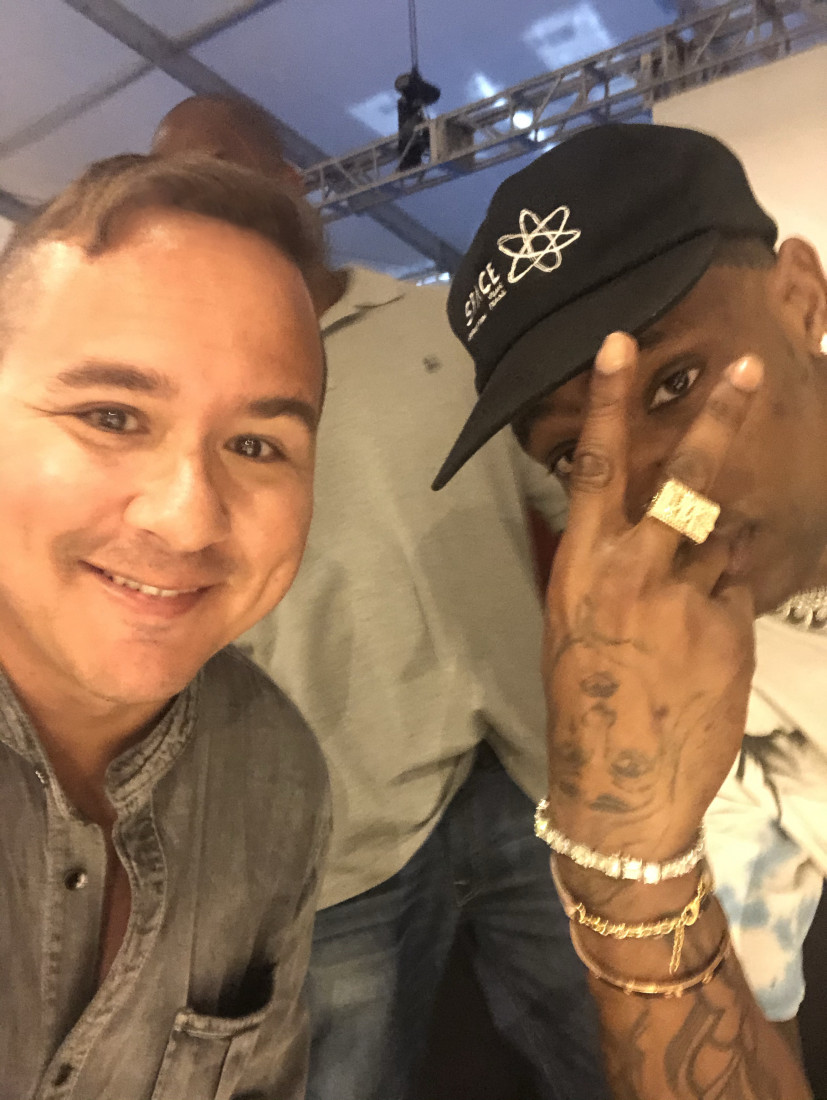 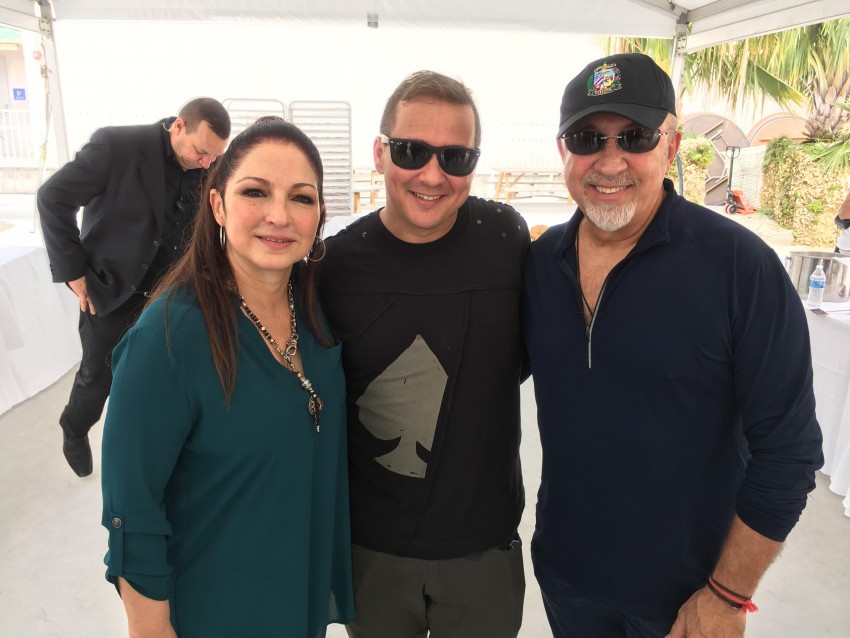 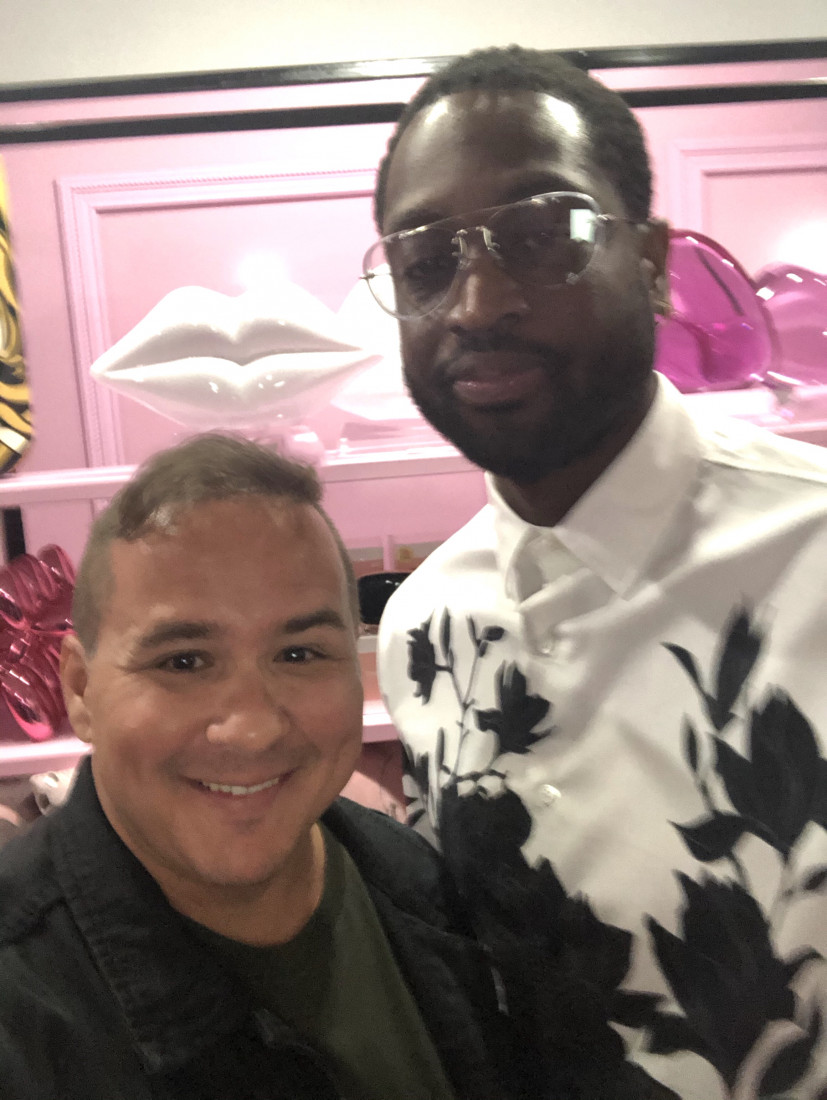 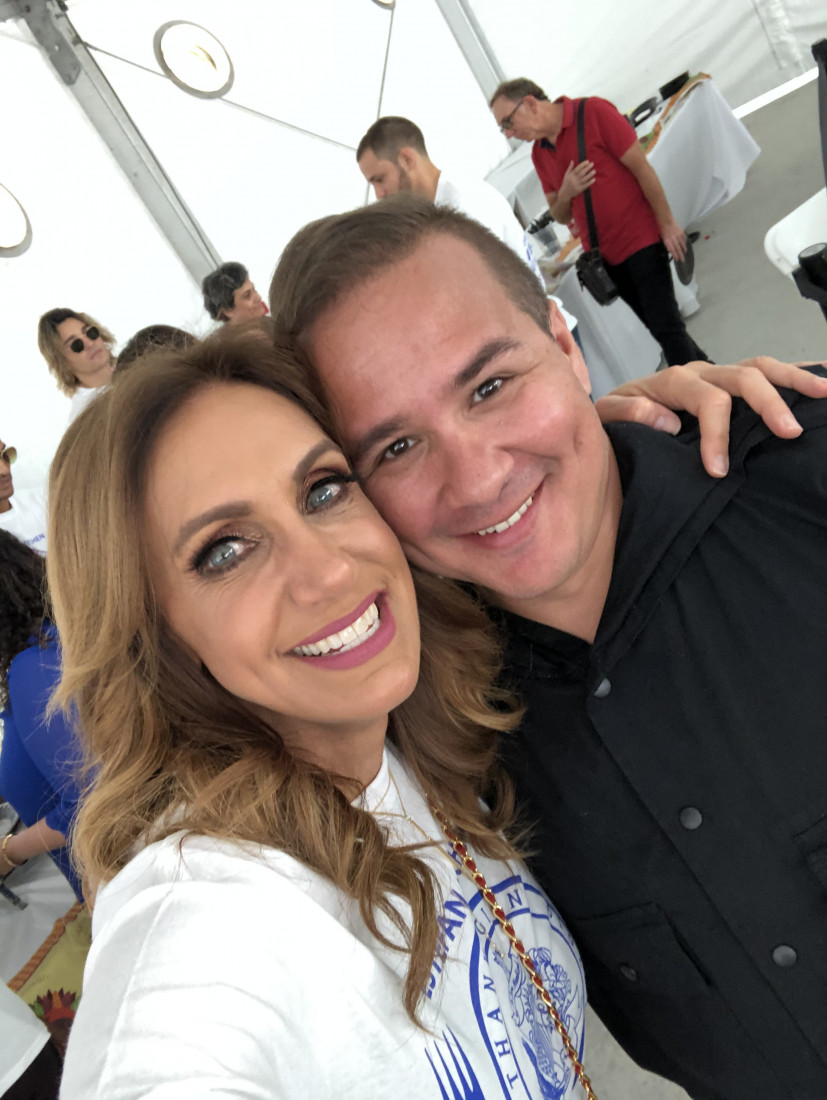 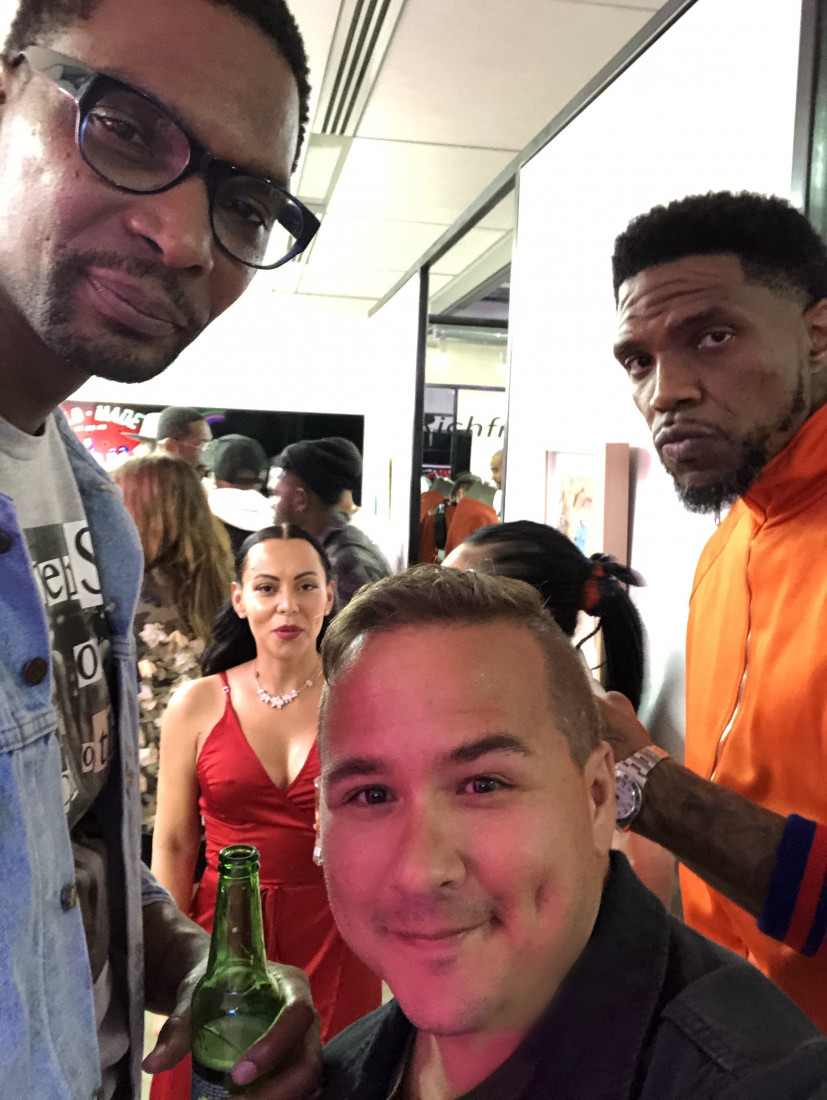 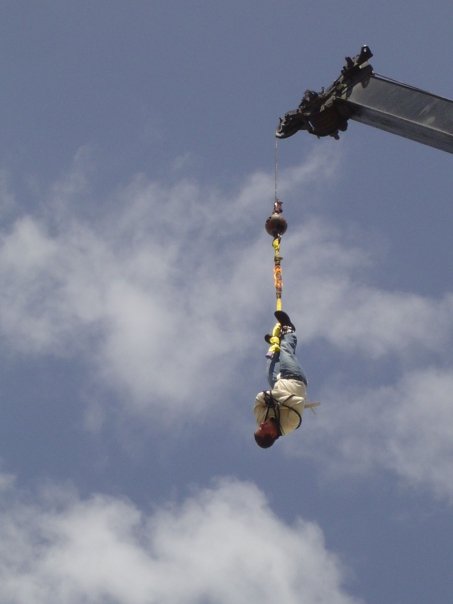 Dylan escaping from a strait jacket, hanging upside down by a burning rope, 13 stories high, over the cement ground. 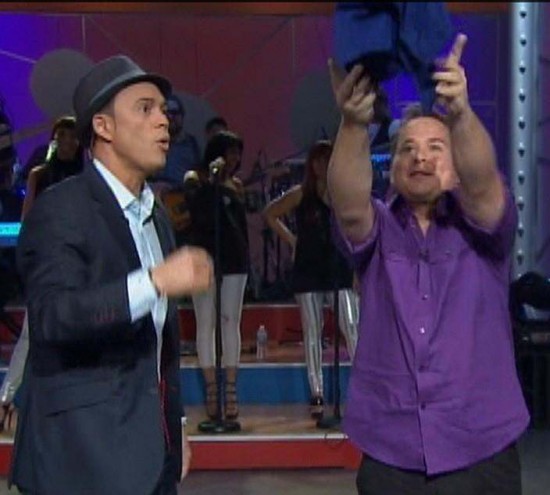 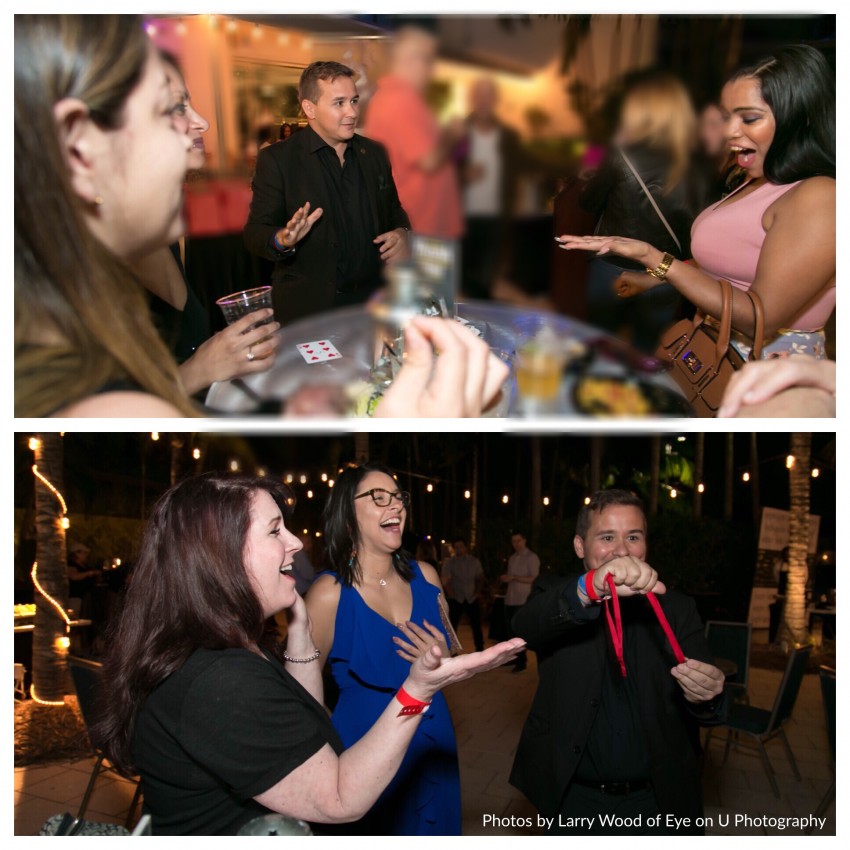 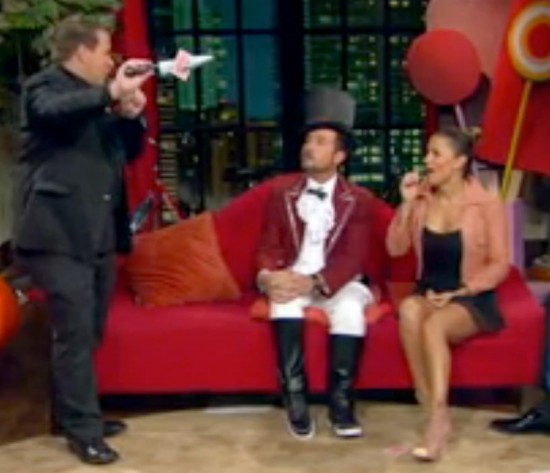 World Champion illusionist DYLAN ACE (available for exclusive events) has become one of the worlds leading illusionists by combining jaw dropping illusions, masterful sleight of hand, mind reading & comedy. Ace performs corporate events regularly for Fortune 500 companies and has served as an opening act for Julio Iglesias, Celia Cruz, Paul Simon, Britney Spears, & Lenny Kravitz among others. Dylan is a Miami native, and due to his Latin background, can perform his full show in fluent English &/or Spanish. He was even a regular on Latin tv for over a decade.

Ace has a very extensive resume & repertoire and is available for theaters, television, Corporate & Exclusive Events.

I think the one thing that sums it up is that many of my guests said he was great and took his card.

Thanks so much for having me at your event Tina and for taking the time to share your experience. It was great performing for you and your guests!

Dylan was communicative and professional throughout the process, showed up early and kept up at ease the entire time. His performance was great and he was wonderful with both the children and adults. Highly recommended.

The kids enjoyed every minute

Dylan is very professional and knows how to entertain kids. Before he arrived all the kids were bouncing off the walls; once he setup and was ready to roll, all the kids sat quietly and paid close attention to his show. He engages with his audience too which makes it fun. Overall the kids enjoyed the show and the parents were happy the kids were focusing on him instead of running wild. Thanks Dylan!

Funny, charismatic, entertaining! Did a 45 minute show and it was fantastic. Crowd loved it. Would definitely recommend!!

Thanks so much for the great review!

Dylan Ace was more than amazing. Even my magician friends thought he was a terrific magician. So nice. Worked the crowd very well. Can't recommend him enough!

Thank you for your kind words!
I had a great time performing for you and your guests.

Thank you so much for your great review!
I enjoyed performing at your camp event.

Dylan was amazing! Great communication before the event and reasonably priced. Very prompt and professional. The girls loved him! Very cool tricks with a touch of age appropriate fun. When after the show, even my husband and I were talking about how he could have possibly done some of those tricks, then that’s a good sign.. ;) I would hire him again right away. Highly recommended. Very nice person too :)
5 stars

Thank you so much for this great 5-star review and for choosing me as your entertainer for your daughters bat mitzvah. I really appreciate you taking the time to share your experience!

A Show to watch! Simply amazing.

I was a little worried thinking we were going to get baby type magic acts but I was soooo pleasantly surprised. Dylan was funny, interactive and his acts were fantastic. We still can't figure out how he did them. I HIGHLY recommend him for any party.

I’m happy to hear that my performance exceeded your expectations!
Thank you for sharing your experience, I had a great time performing at your event.

What a great performer. Fantastic for all ages

Thank you for your awesome review Marc, it was great meeting you and entertaining you & your guests!

Dylan was very promp. In fact slightly early which worked out great
Very professional and thoroughly enjoyed by our whole group. Engaged our guests. I would highly recommend him.

Thank you very much for such a great review!
I had a great time performing for you and your guests.

Dylan did such a great job at our corporate function. Everyone was still taking about the magic hours later. He is very professional and is great interacting with the audiance. I would recommend him and would hire him again. Thanks Dylan!

Thank you for your kind words. I so appreciate you taking the time to share your experience!

Dylan has a great attitude, is dependable, a Showman, and very professional.
He delighted & captivated our audience.

The Show
STROLLING ILLUSIONS: Interactive sleight of hand and illusions up close for small groups of people at a time. Ideal for dinner & cocktail parties, corporate functions, and large events.

FORMAL MIND READING & MENTALISM PERFORMANCE:
A full mentalism show which unlike Dylan Ace’s illusionist performance that mixes magic & illusions with the mind reading, the mentalism performance is a unique experience of only mind reading demonstrations and psychological feats.

Dylan Ace has a VERY extensive resume & repertoire. Ace has done everything from amazing Shaquille O'Neal and Dwayne "The Rock" Johnson with intimate sleight of hand close-up magic, to levitating Gloria Estefan, and even getting strapped into a strait jacket by Dan Marino- hoisted 13 stories upside down by a burning rope & successfully escaping! He has appeared on every major television network, performed for 60,000 people at Hard Rock Stadium (one of the largest audiences in magic history); opened for Sinbad, Whoopi Goldberg, Jimmy Buffett, The Bee Gees, Jon Secada, Crosby, Stills & Nash; and has toured throughout the United States, Latin America and Europe to rave reviews.

World Champion magician Dylan Ace can perform anything from a guest spot to a full headling show. He appears regularly on Latin television and has appeared on every major television network in both the Latin & American markets.

• Ace was discovered by Las Vegas Illusionist & Star, Lance Burton, whom was so impressed by Ace’s talents, he invited Dylan to appear as his special guest star on his FOX television special. Lance Burton said, “His appearance was the highlight of the entire show.”

• Dylan is the youngest world champion of the prestigious International Brotherhood of Magicians world competition.

To learn more about Dylan and his magic watch the "ABOUT DYLAN" video on this profile.

“Dylan Ace conjures up spectacular tricks with no smoke or mirrors.”
-The Miami Herald

“One of the leading illusionists of this generation.”
-Univision Television

Born Jason Dylan Ace on October 31st 1981, Dylan Ace was destined to enter the world of illusion. Dylan is a magician like no other: his show is a fun & unique interactive magical experience. Teller of Penn & Teller said, “I must say Dylan has certainly done his homework! That is VERY hard stuff he is doing and he does it with the kind of relaxed control one gets only after lots of polishing. To me the best thing of all is that he genuinely seems to be having fun performing. There’s a nice easygoing cheer about the way he carries himself. Not stiff and stilted like most magicians. He is a real pro.”

At 18, he was taken under the wing of Las Vegas magician Lance Burton, whom invited Ace to appear as his special guest star on his personal television special on FOX, "Lance Burton: On the Road". Burton said, "His appearance was the highlight of the entire show.” At 12 years of age he became a World Champion becoming the youngest winner the International Brotherhood of Magicians competition. At 10 years old he met his mentor Fantasio, whom opened for Liberace &The Beatles, and appeared 5 times on the Ed Sullivan Show.

Ace can perform his full show in fluent English & Spanish. And has a VERY extensive repertoire. Ace has done everything from amazing Shaquille O'Neal and Dwayne "The Rock" Johnson with intimate sleight of hand close-up magic, to levitating Gloria Estefan, and even getting strapped into a strait jacket by Dan Marino- hoisted 13 stories upside down by a burning rope & successfully escaping! He has appeared on every major television network, opened for Sinbad, Whoopi Goldberg, Jimmy Buffett, The Bee Gees, Jon Secada, Crosby, Stills & Nash; and has toured throughout the United States, Latin America and Europe to rave reviews.

Andrea C. said “Stephan was fantastic and such a pleasure to work with. The kids and adults were mesmerized by his magic and the birthday girl was over the moon to be…”

Arianna B. said “I am so pleased with Mega Magic's work! I hired him to do strolling magic for my recording studio's launch party and he was spectacular. A talented people…” 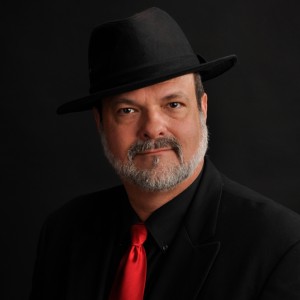 Alex L. said “My Daughter is a 10-year-old skeptic and she was totally captivated with her friends thank you Bill for a great job!”

Chaim S. said “Excellent entertainment! Kids absolutely loved it. Iyan and his amazing team were super flexible, accommodating, and a pleasure to work with!”