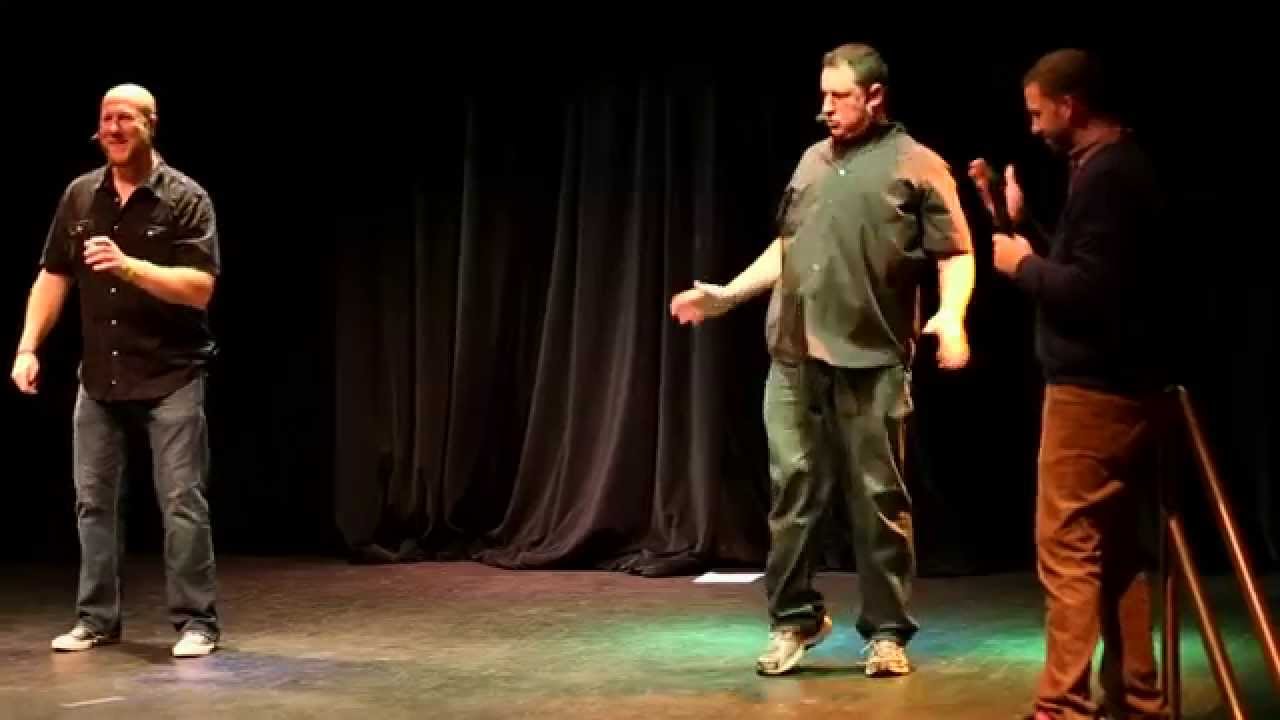 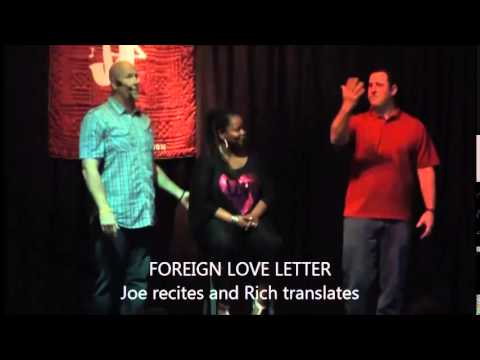 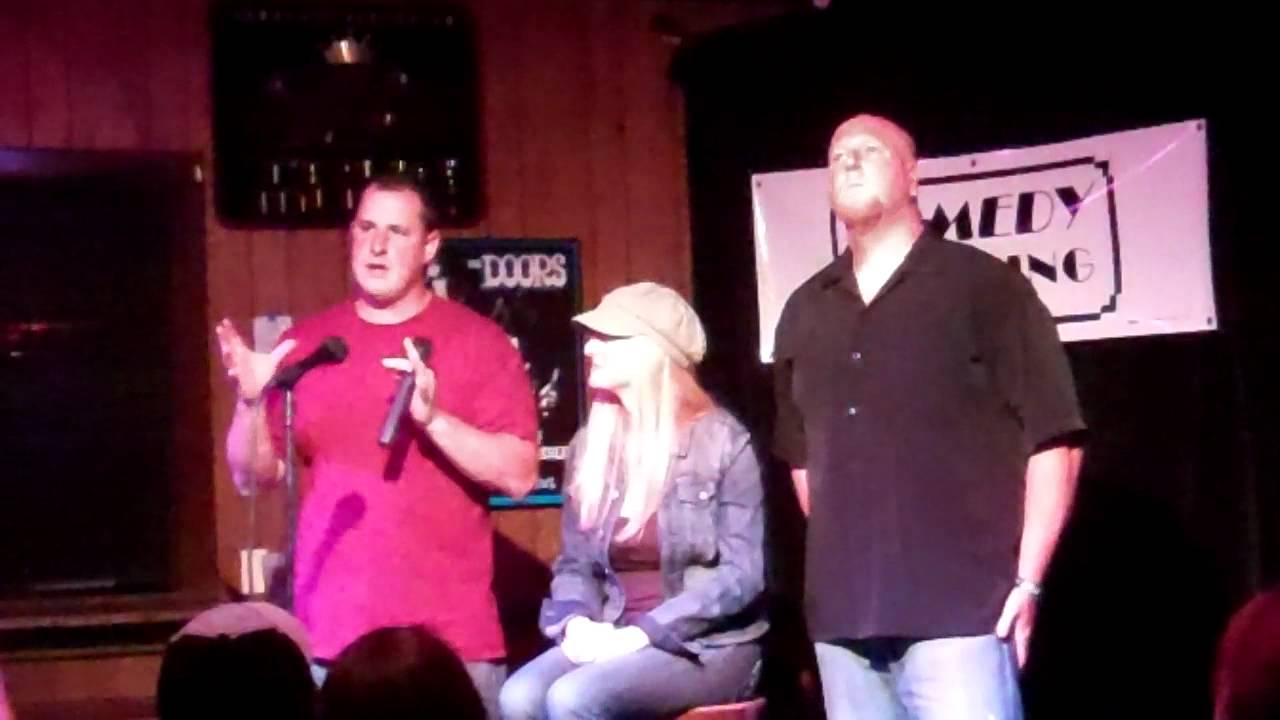 Serenading a nice volunteer from the crowd

Only a brief listing of credits. 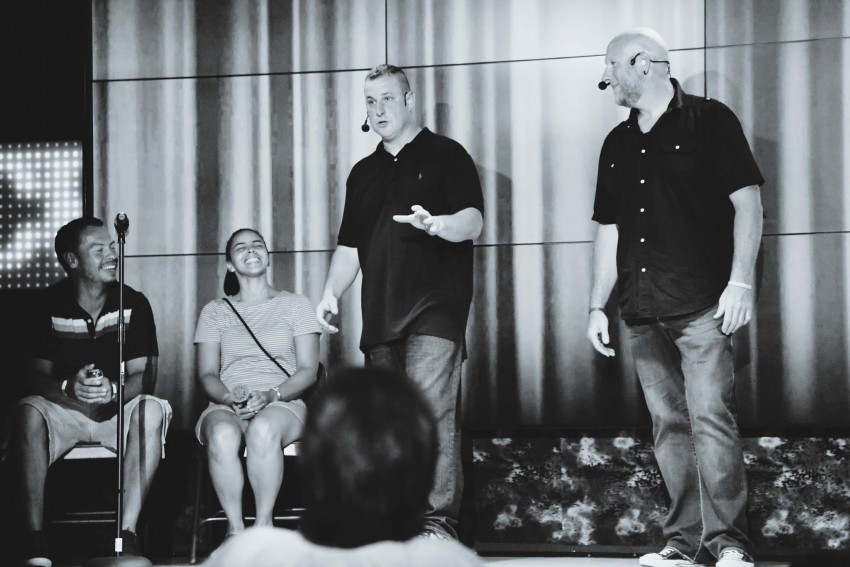 Making a lovely couple the stars of the show! 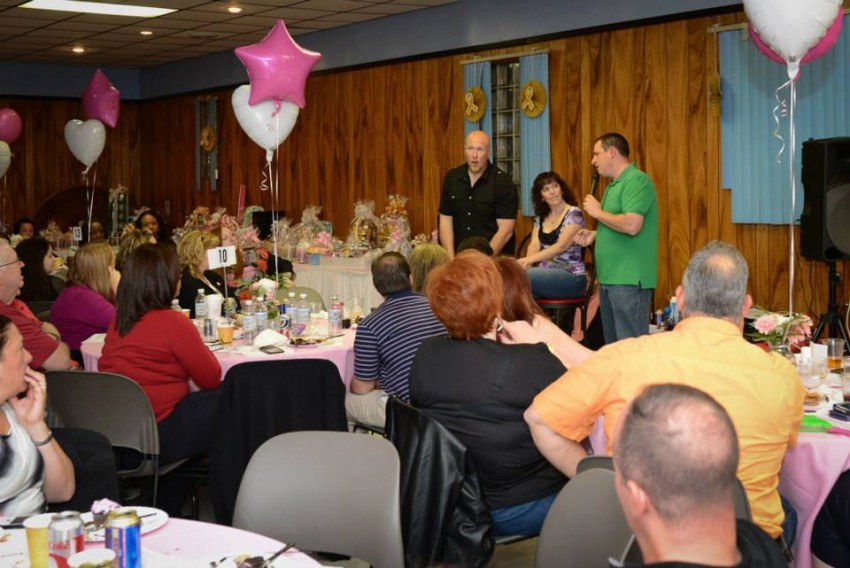 Rocking a benefit fundraiser for charity. 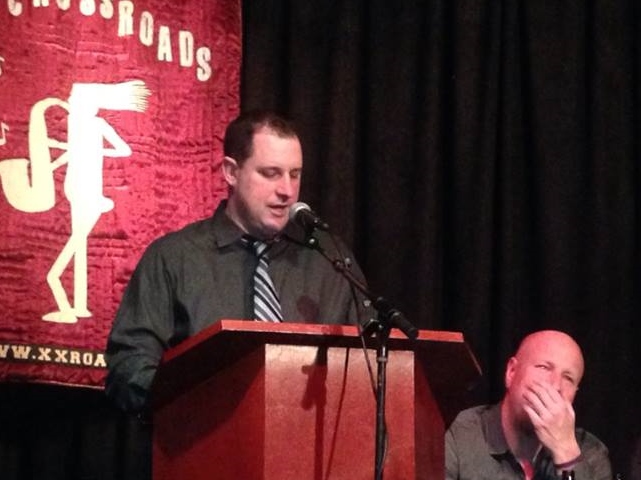 Performing a celebrity style roast for a private birthday party. 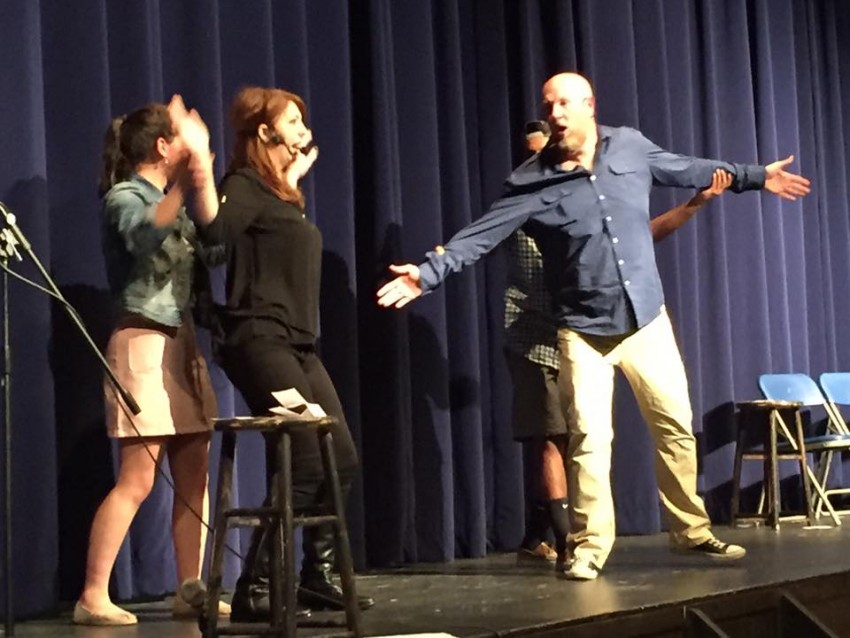 Audience participation is so much fun!! 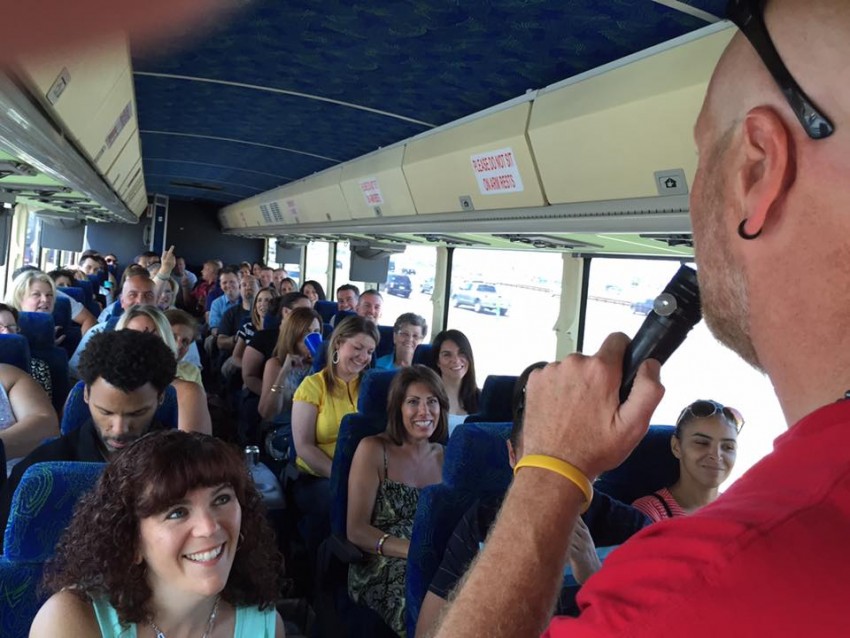 Having a blast on our annual fan favorite Bus Trip to Atlantic City.

McDonald and Carney are an improv comedy duo who specialize in corporate events/retreats, private parties, birthdays, graduation parties and all types of special celebrations. We perform as a fast paced, short form improv troupe who rely on audience participation, so you and your guests become part of the show!
We have performed at the Tropicana, Taj Mahal and Caesars in AC, SoHo Playhouse NYC, Broadway Comedy Club, Landgrove Inn VT, as well as for Avis/Budget Rental Car, American Cancer Society, Elks, Knights of Columbus, PTA's and dozens of organizations.
We create a unique show every time. Before you know it your guests are exhausted from laughter and you are the hero who booked us.

These guys were so quick, witty and funny. A true talent of including the kids and adults in the show and keeping us laughing! Highly recommend them and can't wait to see their adult shows too!

I wish it never ended

It is always fun. We saw them perform 3 times. Once in Garwood which was a family friendly act. And twice in Montclaire. Those shows were geared more towards an adult crowd. Very unique and very funny.

I love how the audience is part of the whole show. They are so quick with what they come up with! This big bald one is just a real silly pants.

For people who love live comedy there is nothing better than feeling like you are a part of the act. McDonald and Carney have put together a show where everyone can be as involved as they feel comfortable, whether it is yelling out suggestions or hitting the stage to have their life portrayed by one of our actors. Because our show is geared towards the interests of the crowd, we are not limited to a specific group of people. We will give you just as good of a show if it is for a group of tweens as we would for the board of trustees and everyone in between. We play games like "The Dating Game" where the audience give suggestions to the bachelors as to whom they should portray. Or "Sound Effects" where an audience member provides the sounds to a scene being performed. Or a crowd favorite called "The Couple Game", this is where two volunteers join us for a comedic version of "This Is Your Life". These games take on different forms depending on the special interests of the crowd. The Couple game becomes the "BFF" game for teens and young adults. All games are geared towards age, interest and venue appropriateness.We are proud of the show we present and would love for you to see why.

Rich McDonald & Joe Carney are the comedy duo who have performed everywhere on the East Coast from Atlantic City to Vermont. Their act is reminiscent of the great duos such as Martin & Lewis, Abbott & Costello, and Gleason & Carney. The show features vaudeville sketches, improv games with the audience, and some stand-up comedy as well. “A show meant to entertain all audiences and all guests!"
McDonald & Carney have performed with numerous local and national comedians. Just recently they opened for Michael Winslow, of Police Academy, and are most proud to say that they were in the finals of the Tropicana Casino Talent Contest in Atlantic City. They have also headlined a monthly showcase in New York City at the SoHo Playhouse called the McDonald & Carney Comedy Hour. They have headlined shows at the Trump Taj Mahal and Atlantic City Comedy Club, Broadway Comedy Club, The Looney Bin, and Crossroads in Garwood.
Rich and Joe also have numerous television and movie credits between them. You may have seen one on Live with Regis and Kelly, MTV, TruTV, HGTV, or national commercials. Along with numerous other credits, they were both stars of the independent film Eternal Damn Nation. This film was screened at Cannes Film Festival and is recently being distributed internationally and streaming online domestically.
They are also very comfortable performing in corporate environments, as they were recently the entertainment for the Avis/Budget Rental Car tri-state owners’ conference. They have performed numerous times as the in-house entertainment for the Landgrove Inn in Vermont, as the entertainment for the Union County Friendly Sons of the Saint Patrick Annual Dinner, American Cancer Society Relay for Life kick-off celebration, the Nomehegan Swim Club annual end of season party, and dozens of Elks, Knights of Columbus’ and charities.
They have also showcased their talents at the Esphrata Performing Arts Center, Middletown Arts Center, Randolph Performing Arts Center, the Jersey City Comedy Festival and at the Thumbs UpState Comedy Festival. McDonald and Carney have put together a strong following of fans, especially in their home region of NJ and NYC.

Our show is geared to include the audience, without them we are lost. So it is important that each venue does its best to provide us with as much space to perform as possible. And if the audience can not hear us they can not enjoy us. Though we travel with cordless microphones the more sound equipment provided the better. However, we can provide our own sound system if necessary.

We have a reliable set list that we work off of regularly that consists of crowd favorites such as "Dating Game", this includes all four comics on stage. Our 'Bachelorette' leaves the stage and audience goes to work. They determine who the 3 eligible men will portray and hopefully they win a date with the beauty. The "Couple Game" which consists of 2 of our actors and 2 audience members. Our actors ask 4 generic questions to our couple and perform a comedic version of their life. The couple agrees or disagrees with the actors though the use of bells and horns which always brings the story down several unexpected paths. One game that is requested on a regular basis is called "Foreign Love Letter". A lucky lady is picked from the audience where she is recited a 'beautiful' love letter from her significant other in a language of her choice. Misinterpretation by our resident interpreter always brings the house down. Some of these games are interchangeable depending on the crowd. Such as the couple game, it becomes the "BFF" game for kids and teens, or the dating game takes on more of a bachelorette rose ceremony for a younger crowd. "Freezetag", "Emotional Rollercoaster" and "Sportscasters" are mainstays in our shows because they are performed based on audience suggestions. Our shows run 30-90 mins so we are constantly adding singalongs and crowd games to keep the show electric. If the host chooses to include this, we love to perform "Props", the audience is asked in advance to bring random household objects that the comics use for anything other than their intended purpose. We will gear the games towards the venue, the crowd, the interest group or the function. As the host you will have final say on rules and regulations for the show as well as topics to include or avoid.

Most audience members compare our show to "Whose Line Is It Anyway?" Though we are proud of the comparison, we are also proud of the unique style we bring to the stage.