5
(13 reviews)
Get a Free Quick Quote
Add to Favorites 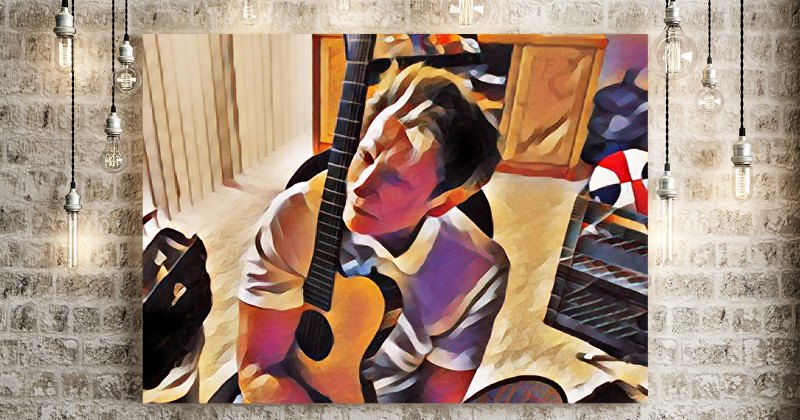 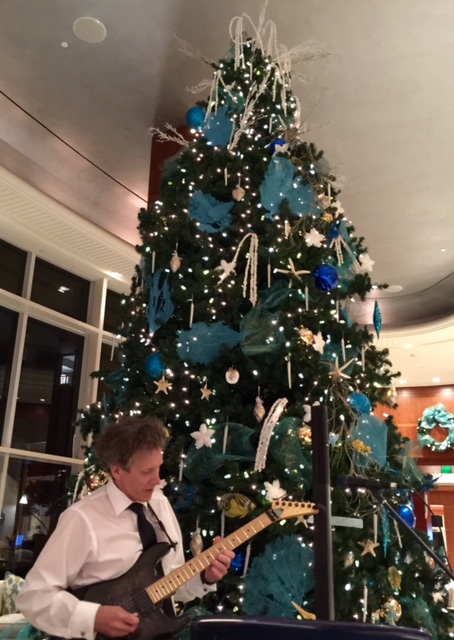 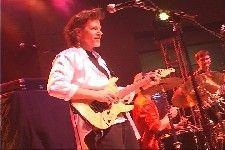 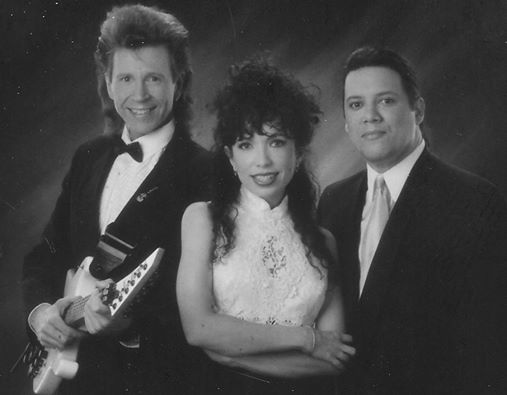 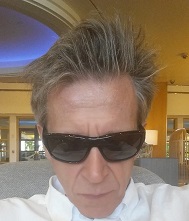 GigSalad chooses me to do their company events in South Fl. Please check my reviews.
Hello ! My name is Don West. I am a Singing guitarist of all styles. I have a Masters degree in music and have been playing and singing professionally for over 30 years. I have found that versatility is the key to a successful event for many age groups. I do not do 1 style of music for 3 hours. My performances are all 3 hours max. Any events that require special requests or more time are done via computer. Please check my videos to make sure I would be appropriate for your event. Thank you so much for your inquiry. I am looking forward to working with you on your special event !

Expert with a guitar a true musician magician

Don is a great teacher he inspires me very much to keep playing my instrument from the time I took sessions with him during lessons I've been proved my style and he helped me create my own style now I am a satisfied guitar player was still not everything that I needed to know but that's just fine because I still have time but I'm not living near him if I could I'd take lessons with him and keep taking lessons because he knows everything about the GUITAR my normal email address is mikedoppenheim@gmail.com my temporary email address is mdavioppenheim55@gmail.com

Love you Michael. I am too far away from Chicago Mike. We will see what the future holds. You sound good and healthy !! It is very good to hear from you and I hope you are are still playing your guitar. Maybe that gig is for YOU to play Michael…..(<; Selah. Calmly think of that ! D

A god of the guitar

We heard Don today at Fresh Thyme, this guy is fantastic! Better than your jazz Youtube demos because your voice and song interpretation were wonderful also!

Thanks Jerry. Nice meeting you today ! I will be seeing you through the holidays at Fresh Thyme ! (<:

Performed at a conference lunch

Don performed during lunch at a conference. He represented GigSalad well. He communicated well, was on time and brought a lot of his own equipment. Thank you, Don.

Thank you Charlotte !!....Let me know if you need me again. Don West

Don was all the way professional, he got to our event more than an hour before it was programmed for. He played our requests. We highly recommend Don.

We couldn't be more pleased with Don.

We appreciate all that Don did for us. He did a great job during the wedding ceremony and 4 hour reception. Don played the perfect types of music, has an excellent voice, made it fun, and hardly took a break. And, he's a very nice guy. We thank him and wish him well.

Excellent Choice for any occasion!!

Don was a critical success factor for our event. He performed exceptionally well, and the songs he performed also matched the energy and vibe of the party. We definitely recommend him for any type of party and will also ask him to return for our next event.

His professionalism was also commendable. He arrived early, set-up prior to the start time, and was awesome! He was also very engaging with everyone at the party.

Thanks so much John. Looking forward to the next party. You did a great job putting it all together. Everyone had a wonderful time. Thank you for having me and being so generous.

Mr. West exceeded our expectations! His level of professionalism was surpassed only by his talent.

Couldn't have been a better experience!

We recently hired Don to play a 50th birthday party. He was a great addition to the event. A great guitar player and singer with a broad range of musical types. I would highly recommend for any event big or small.

Don showed up early, did a phenomenal job playing and singing. He entertained and wow'd the crowd at my 50th Birthday party.
I highly recommend him!
Thanks again Don!
-Eric

You have no idea how good this guy is...

Don taught me to play guitar beginning in 1988. I played seriously for about five years, and recently later in life have begun to study music again. I know good musicians, and Don West is one of the greatest I have ever seen. I'm not talking about a comparison to some other local musician. His musical peers are the likes of Vai, Satriani, Rhodes, Malmsteen... When Don refers to himself as a virtuoso, it's a compliment to other virtuosos. The fact that you can hire a musician this good for one of your events, is like going to the airport to rent a car, asking for the best car they have at their standard rate, and the rental company handing you the keys to a Ferrari... -

The Music Made the Party

I Threw my first indoor/outdoor party and wanted have live music that would entertain the party from beginning to end and have music that touched all genre's as the event had a wide age range in guests. Don showed up plenty early to set up his gear, run a sound check, and discuss any particular requests that I may have. As guests arrived, Don began with a sort of cocktail hour intro of soft hits from yesteryear and today. The volume was perfectly comfortable as guests could mingle, hear and see the music and yet still talk comfortably amongst each other. As the party picked up, so did the music, with the perfect blend of past and present hits that everyone could connect with. None of the music was corny or old fashioned in way that bored or turned some people off. I truly believe that is what made the dynamic of the party. Never too loud, yet energetic enough to get the kids and adults up and dancing. Don is also very entertaining to watch as his guitar playing is exceptional. As a musician myself, I was amazed at his playing skill and ability to sound like the original song, be it from the 50's 60's, 70's, 80's, all the way to present day. I will busing Don again for a cocktail hour that I will be hosting for work, as well my holiday parties. Well worth it and a pleasure to work with. Thank you Don:)

Don West played/sang for my wedding reception this past Saturday! He was fantastic! The entire wedding was raving over his range of music and his talent! My husband is a musician and is very picky when it comes to other musicians and he was completely blown away by Don's voice and talent! Don played music ranging from Frank Sinatra to Jack Johnson and everything in between. He was professional and fun. He took requests and was able to play most of them!! My whole family are music lovers and he was able to get everyone, young and old on the dance floor IN THE DAY TIME!! I would recommend Don to anyone having an event or party where they want chill live music from an amazing person! Don was on-time and ready to go well before expected. He set up and everything turned out exactly how I wanted, even with all the craziness going on in my brain as a bride that day, he made the introductions to the reception and the reception blissful. THANK YOU DON!! I hope to be able to use your services again for another event!!!

I have been reading crowds and have the expertise to know what to play at the right time. Volume is always very listenable and never interferes with regular conversation.

Born in Toledo Ohio, Started playing guitar at age 16. My neighbors and my brother turned me on to music. I loved the Beatles and Jimi Hendrix, Paul Revere and the Raiders, Bob Dylan and later George Benson.
I grew up in a place and a time when music was looked upon with respect and status. The competition was stiff and the musicians were very dedicated to their craft. It was a very good foundation and I was forged with steel in the school of hard knocks.
By age 18 I was playing with the top band in the city. By age 20 was playing with the 3 best bands in the city at the same time. All the bands played completely different styles of music. Rock and disco, oldies, bebop jazz. I was also studying jazz with the premier sax player in Toledo, Gene Parker. He took me under his wing. I also went to Toledo University and Monroe Community College to study music. My schedule was insane and I was not a very fun person to be around. I was very hard on myself. If I didn't play well on the gig I would refuse to take the money.
Landed a record deal in Florida and moved here in 1982. Played with Celine Dion, Todd Rundgren, Ted Nujent, Iggy and the Stooges, Three Dog Night, Molly Hatchett, Tom Warrington(Buddy Rich's Bass Player), Rick Derringer, Chuck Berry to name a few.
I was asked to be the guitar Director at Palm Beach Atlantic University and took that job that lasted for two years until a budget cut. Graduated Cum Laude - Florida Atlantic University, Boca Raton, Fl, 1989. I was invited to perform at the Montreux Jazz Festival in 1989. Went back and got Masters in fine arts. Have played with many of the great club date bands in Florida including Fifth ave, Dan Leslie and Drew T, The Headliners to name a few. Currently doing a solo act and loving it.

All my performances are inside due to the inconsistencies of the weather and insurance liabilities. I bring my own system and lighting to all my jobs. I just need 1 20 amp circuit with 4 plugins within 6 ft of me. Area should be at least 10' x 12'. Stages not necessary.

Scroll in photo section. This is a general idea of music I play. Song list changes regularly.

I need a clean setup area with electrical outlets within 6 feet of the set up area. At least 10' x 12'. Stages are not necessary.

Leela P. said “They played great music and were very accommodating to wants.” 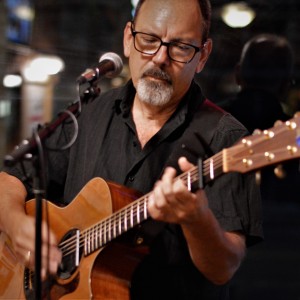 Tina L. said “Bob's repertoire was perfect for the "Giving from the Heart" cocktails and hors' d' oeuvres event attended by a small group of civic minded…” 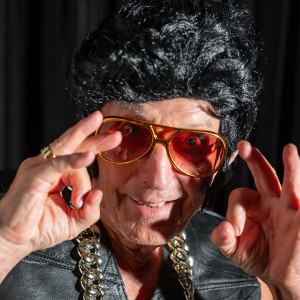 Elvis Sings for You! 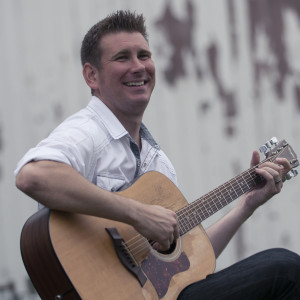 Roberto R. said “This guy performed great the songs that I requested for my marriage proposal. Happy to hiring him for my wedding.”