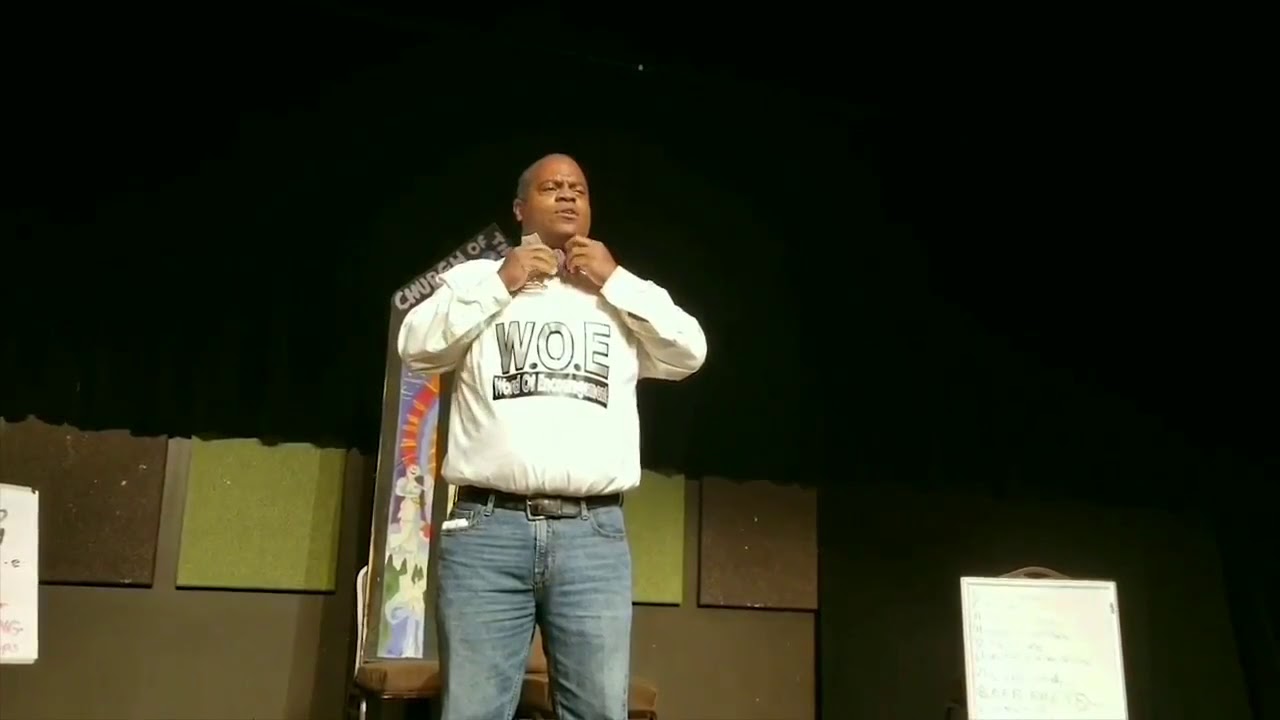 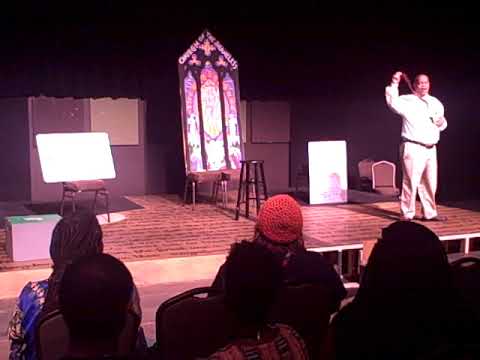 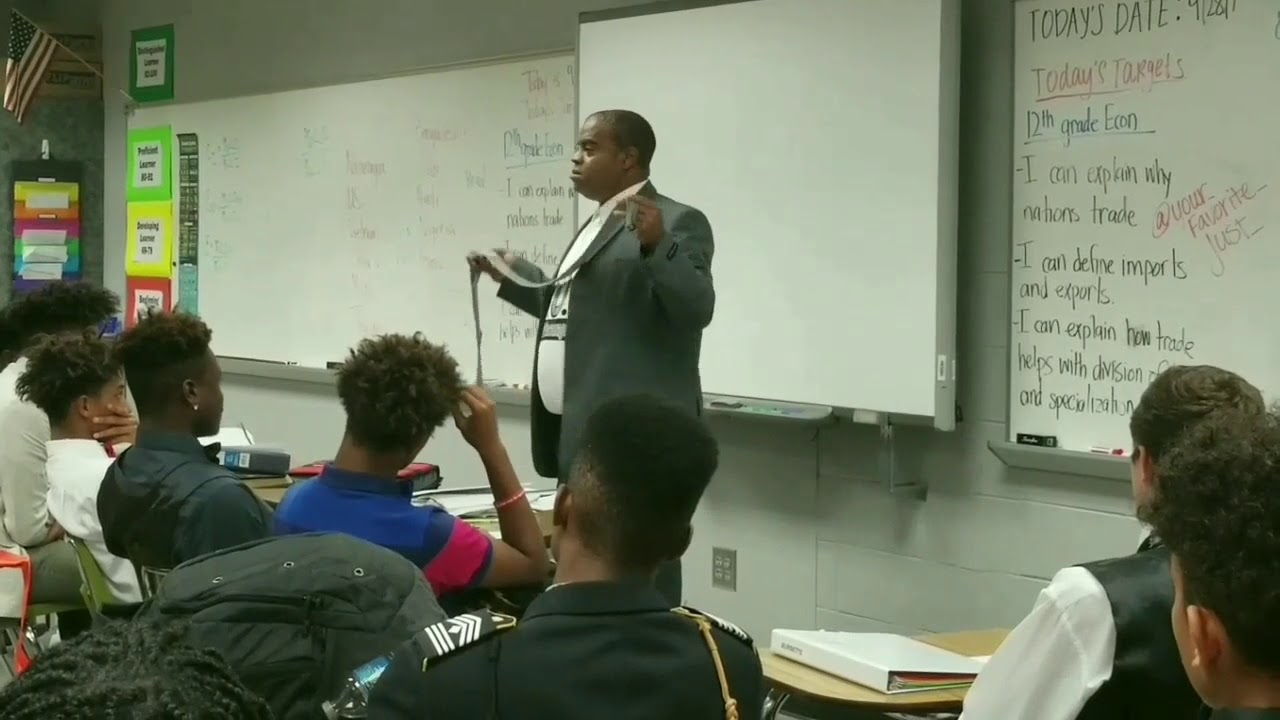 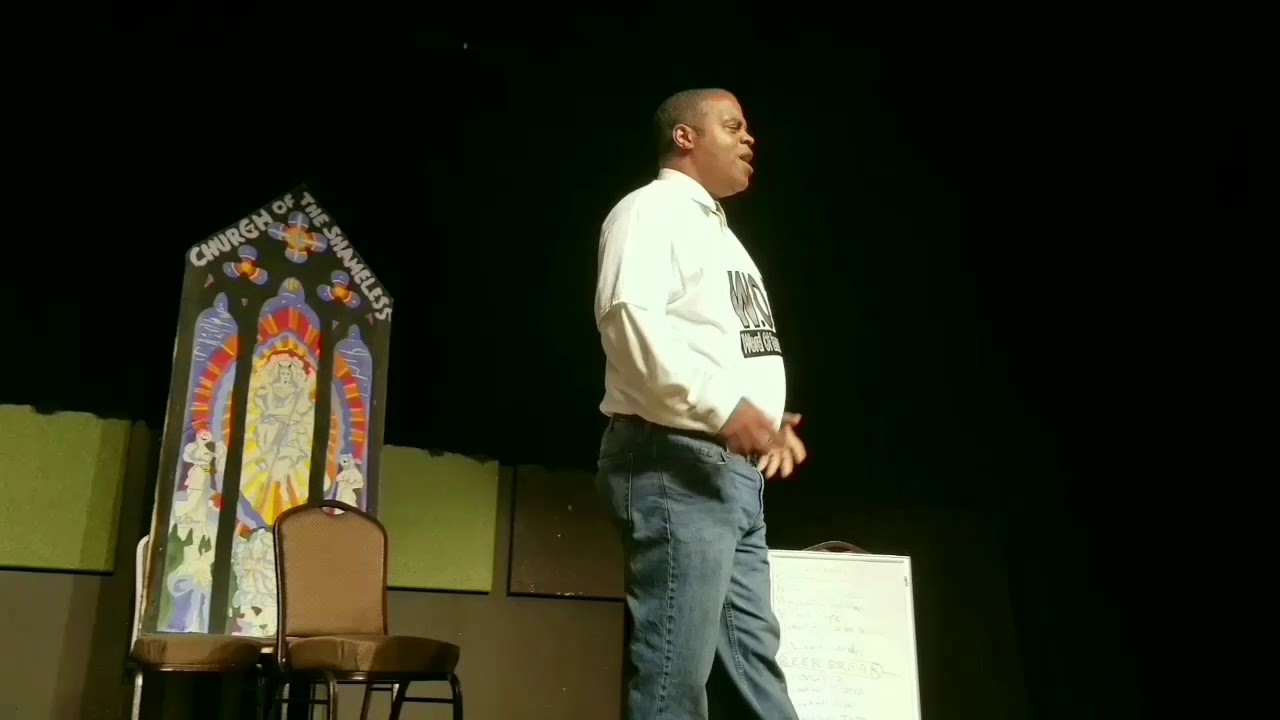 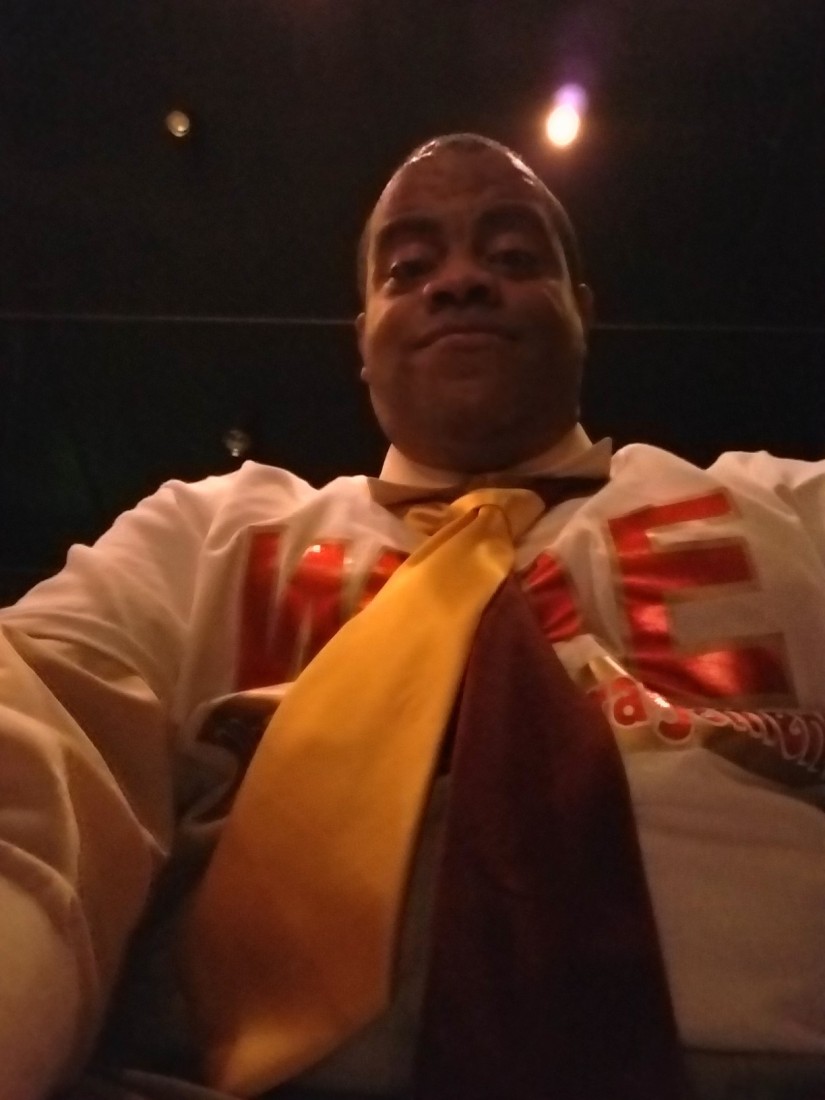 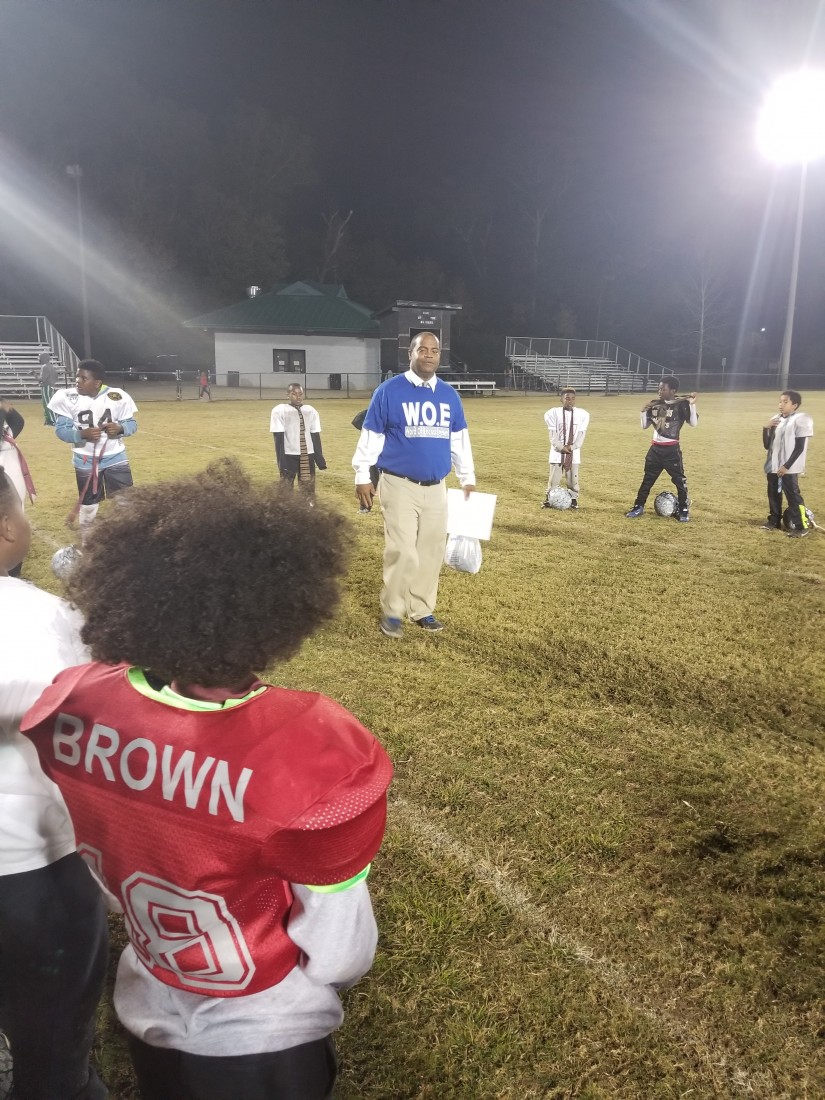 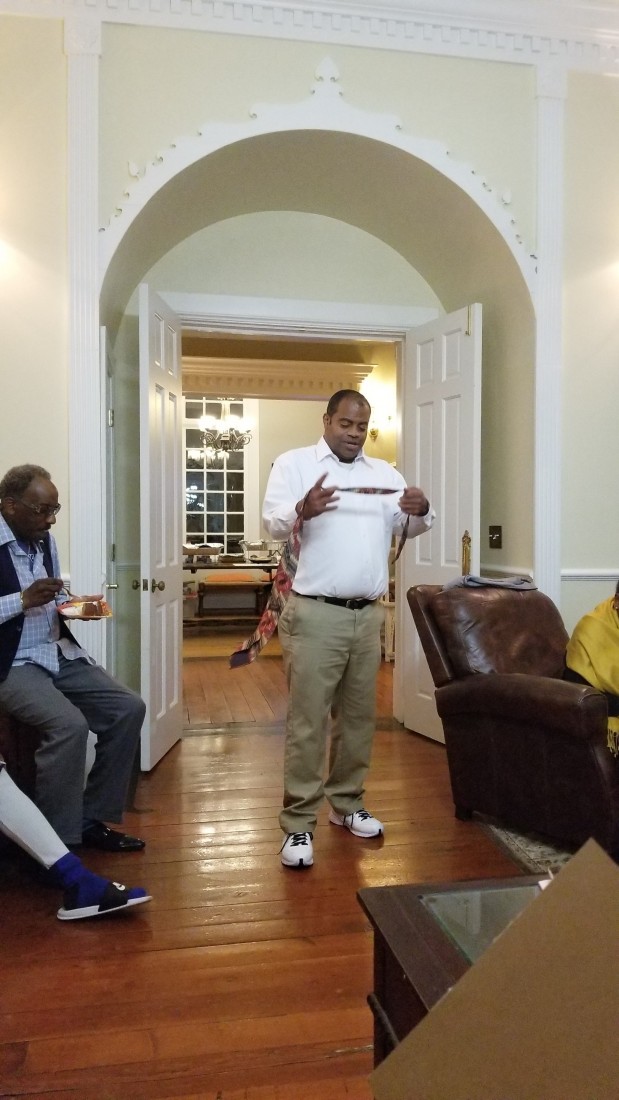 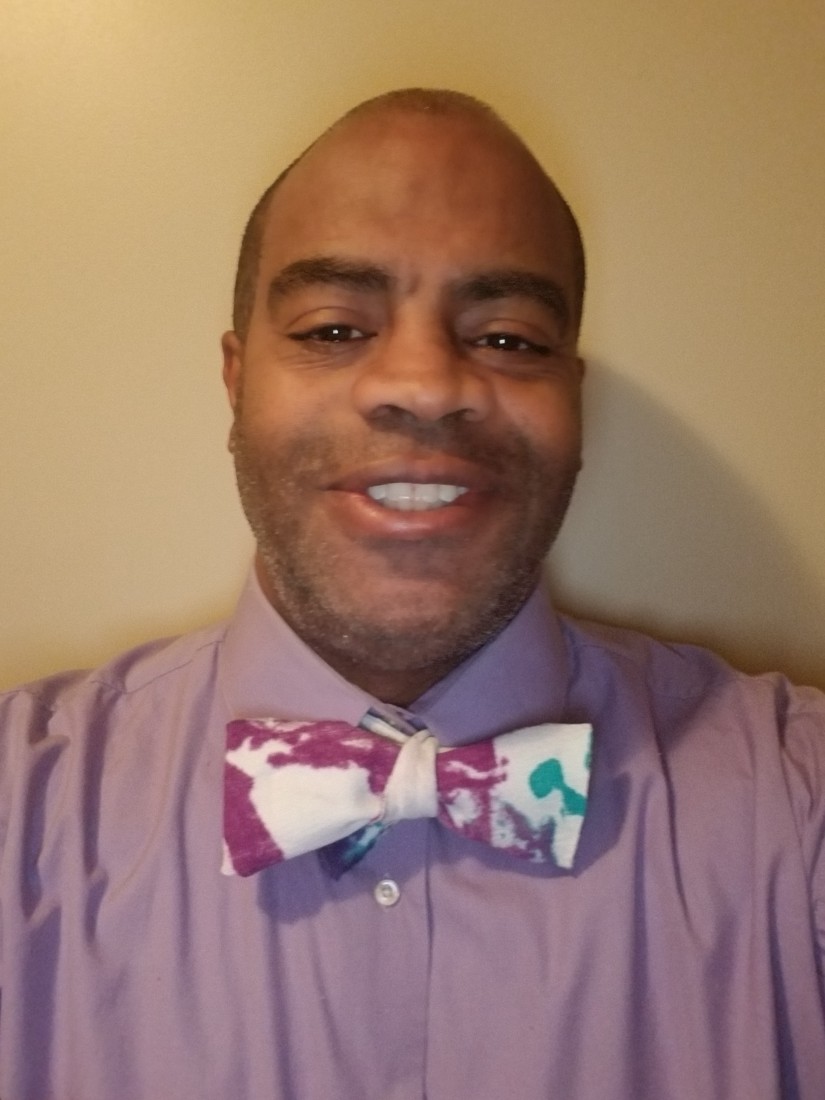 enTIEtainer Tells Stories Through Neck Ties to Empower Others to Greatness. Hayes had to learn how to turn the regular ties that he already had into bow ties so that he could continue to participate in Bow Tie Monday.

Now Derrick Hayes has branded himself as the “enTIEtainer” and has added new tie tying techniques to his seminars, workshops and Stand Up Encouragement sessions.

The “enTIEtainer” is available to perform and uplift audiences at schools, colleges, corporations, meetings, events, concerts, festivals, clubs, casinos, churches, carnivals and other venues where people need a positive vibe.

What an amazing experience we had with Mr. Derrick Hayes, The enTIEtainer. Mr. Hayes was a blessing to our team given inspiration and life lessons to our athletes. He has touched not only our team but every person he comes in contact with. If you have not booked him he is a must see before you leave this earth. I must say to 10 speakers I have ever heard that you Mr. Hayes for coming into our life a leaving positive inspiration.

Mr. Derrick Hayes has always captivated, not only the student's attention, but educators and parents as well who have attended his engagements at Shaw H.S. for the past couple of years. Mr. Hayes' motivational message is always dealing with how ordinary young people can become extraordinary achievers in our society starting today. He gives them the hope that they can overcome almost any obstacle they face in school and later in life.
For the past couple of years, Mr. Hayes has been repeatedly invited back to many of our events and celebrations here at school. Many of the students stated how much they appreciated his genuineness and believed Mr. Hayes truly cared about their success. I believe his messages will remain in their minds for the time to come and trigger a well of energy when the going gets tough.
If you’re looking for that individual who is real, engaging, inspiring, then one call is all you need to Mr. Derrick Hayes for your speaking engagements.

How to tie a bow tie

Derrick did an excellent job speaking to our group. He is an awesome motivational speaker and an AWESOME person.

Derrick is a passionate and talented “encouragement” speaker with a gift for creating motivational messages from any word or name that you present to him. I have had the opportunity to watch Derrick on many occasions and see audiences completely amazed. I recommend Derrick without any reservations.

I have known and worked with Derrick Hayes for several years. What's amazing is his ability to continuously evolve, and speak to all ages of people. He captures the attention of the youth and challenges them to expand their minds to the possibilities that exist in their lives.

Derrick Hayes is an excellent speaker. His content is always very stimulating intellectually and thought provoking. He does a great job with audience participation and always leaves the group captivated and wanting more!

If a meeting planner hires me here are some things that they will receive.
1. A quality presentation based on the information and research provided.
2. Willingness to promote the event before through social media and interviews if need be.
3. Opportunity for a Derricknym signing where attendees can receive a card with their name on it turned into a positive messages right before their eyes.
4. Neck tie lessons for all can be included before or after where the emphasis could be on learning how to tie A. Necktie B. Bow Tie or C. Ascot

enTIEtainer Tells Stories Through Neck Ties to Empower Others to Greatness

Derrick Hayes is the #1 Encouragement Speaker and is internationally known for having the unique talent of turning name and words into positive messages within seconds right before your eyes. Hayes calls these Derricknyms.

The last thought on Derrick Hayes mind was to wear a tie to work but he also did not want to say no to someone else dream. After wearing a bow tie for a few weeks there was a day when the weather would not permit anyone to go out and get another bow tie so Hayes had to learn how to turn the regular ties that he already had into bow ties so that he could continue to participate in Bow Tie Monday.

During workshops and seminars Derrick Hayes started and teach others how to tie regular ties and also how to turn them into bow ties and the impact and feedback from men, women and children was incredible.

Now Derrick Hayes has branded himself as the “enTIEtainer” and has added new tie tying techniques to his seminars, workshops and Stand Up Encouragement sessions like tying one behind his back and turning it around to show others how to overcome adversity. 2 Chainz vs 2 Ties is a tribute to Hip Hop and Tauheed Epps who is known professionally as 2 Chainz (formerly known as Tity Boi) that inspires others to look at fashion as a way to lift themselves up when they fall. The Hurricane Harvey tribute was inspired by the events that took place in Houston, Texas where the “enTIEtainer” takes the socks off his feet and turns them into a Bow Tie right before your eyes to let audiences know that sometimes you have to walk through obstacles to get to opportunities.

The “enTIEtainer” is available to perform and uplift audiences at schools, colleges, corporations, meetings, events, concerts, festivals, clubs, casinos, churches, carnivals and other venues where people need a positive vibe.

A table so that I can have information to to market what I do. 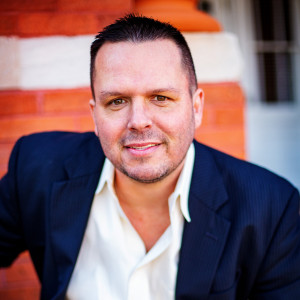 Marianne F. said “Jody was wonderful and everyone raved about our fun night!” 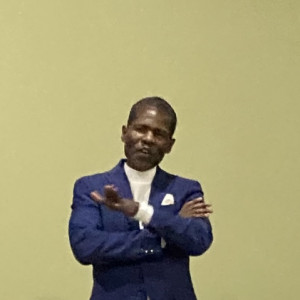 As a published author with a compelling story, I motivate people to face & overcome what they thought were obstacles, and hand them the keys to unlocking that…