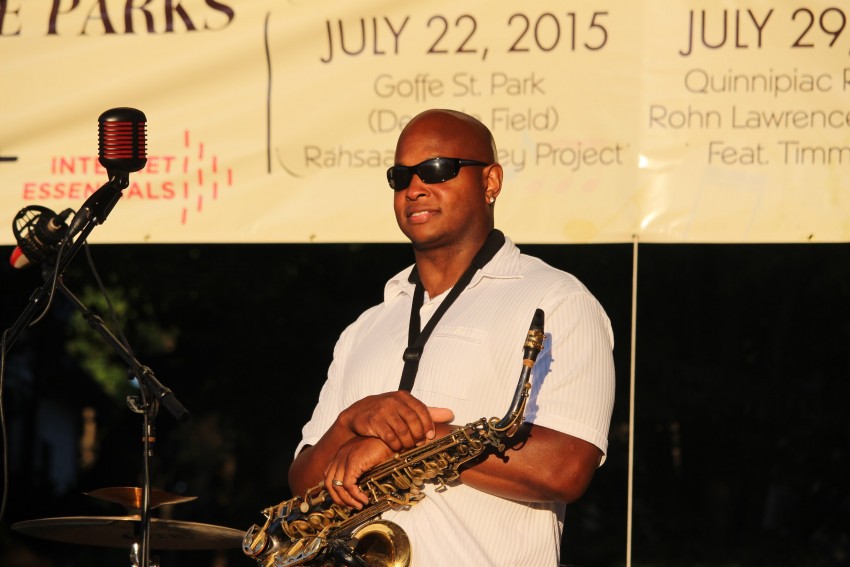 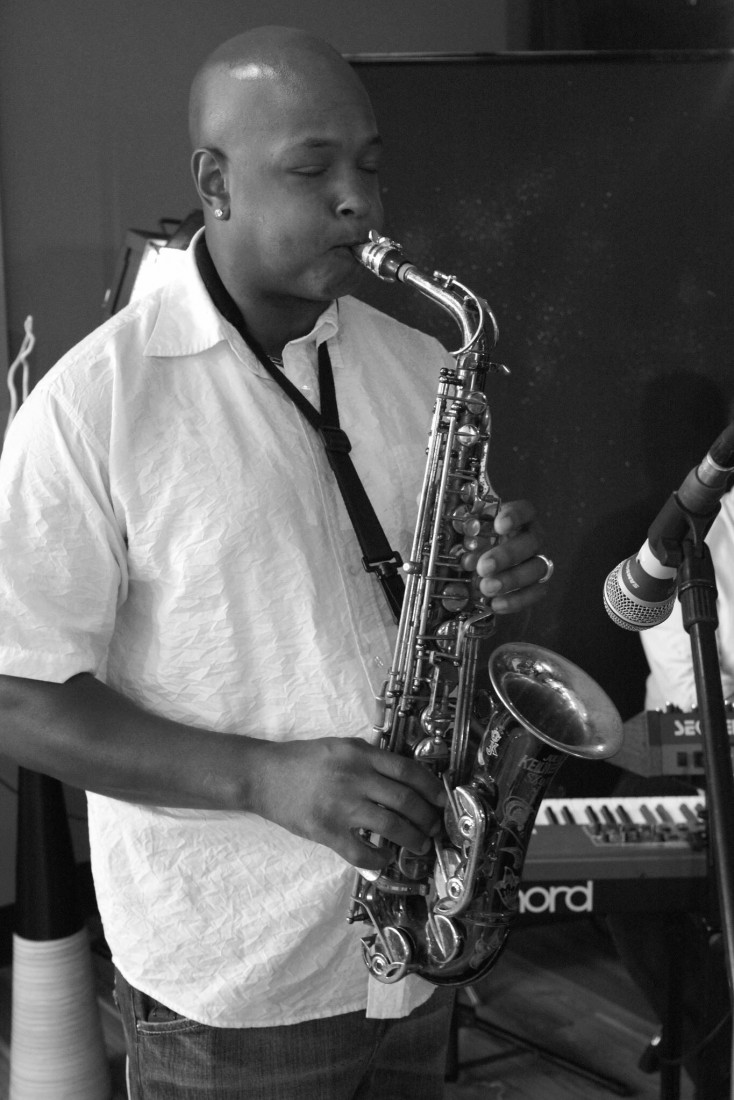 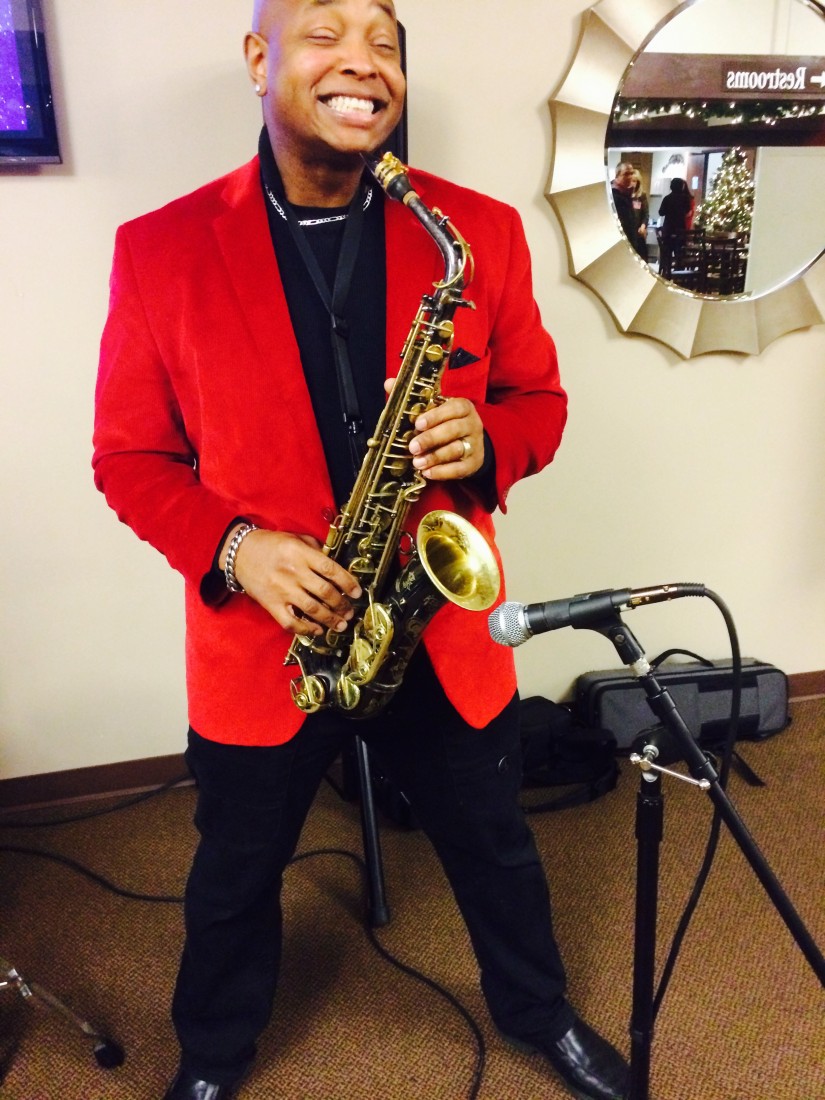 David Davis is one of the most incredibly talented performers of our time. Whether it is with a full band or solo performance he leaves erveryone with a smile. His energy on stage and magnetic sound is contagious. David Davis will add the just the right atmosphere to an event whether it is a private house party, corporate event, cocktail party, wedding, restaurant, bar, religious event or a hotel lobby. David plays alto, tenor, soprano saxes as well as the elecric wind instrument (EWI).

If you’re looking to create an experiential event, David is your guy! His music added such a unique element to our big day. Thank you so much David❣️

David Davis was AMAZING. If you are thinking of booking him for your event, do it! He is so professional, friendly, and such a talented musician. Everyone at my wedding loved him and could not stop saying great things about him.

We did enjoy David's music and he was great fit to the party. I highly recommend David for your party and looking forward hire him again.:)

We hired David to play for our wedding and it was the best decision we could have made. He's not only an exceptional musician but is extremely charismatic. If you want pure perfection and class for your event this is your guy!

Talented, energetic & great personality knows how to work the crowd!

David did a great job with our event. He played upbeat music and popular covers which our guests loved. He had a great stage presence and even played in the crowd. He arrived on time with all the audio equipment needed. A pleasure to work with!

He played on my wedding. All the guests and friends just love him.
He is the bestest saxophone player.

The David Davis experience can be from providing the perfect background music and energy for a social that people are eating and/or networking to putting on a show in front of a captive audience. David has performed solo concerts as well as performing at 5 star international hotels. David makes the audience feel as if they are a part of the show and experience.

David Davis is one of the most promising, young, talented and gifted musicians today. David was born and raised in Connecticut. He is a Hartt School of Music graduate with a degree in Jazz studies and Music Management. For five years he studied with and is a protg of the late world-renowned, professor and jazz saxophonist, Jackie Mclean.

David has traveled and performed in Hong Kong, Beijing during the 2008 Olympics and Shanghai, China at some of the most prestigious venues and hotels. David’s contemporary and Straight-ahead collections have established the Connecticut-based musician as one of the most prominent artists. His self-produced music features him on keyboards, Drums and Percussions, EWI (Electric Wind Instrument), drum programming, and background vocals. David has definitely earned the reputation as the “musician’s musician.”

After recording “Smile” in 2005 and having it played on Smooth Jazz stations nationwide David has recently released 3 simultaneous recordings, “Pop Droppin’ It”, “An R&B Edge” and “Song Of David”. The 3 are Pop, R&B and Gospel cover Cd’s, respectfully. Recordings include incredible renditions of songs ranging from Donnie Hathaway to Justin Timberlake and Gnarls Barkley. He recorded his debut Album in 1998 as a Christmas recording, "The Reason For The Season". His sophomore recording is called, "Can't Get Enough Of Your Love", which has received rave reviews. David completed another recording, which is called “Reparations”. This project displays David’s producing talents. It’s a compilation of various artists from Connecticut ranging from R&B, Hip Hop, Soul, Jazz and Spoken Word. David is in the process of producing a DVD documentary on his life and career thus far that should be available by the end of the year.

Whether he is playing contemporary or straight-ahead jazz, David stands in a class all by himself. He is known for his swiftness on stage, his unique round sound which is percussive yet soulful and his contagious smile. He has the ability to surprise the audience with something out of the ordinary. David gives his audience what they come for - a great show!

David has his own production and publishing company and is partner of a recording studio by the name of “Cream de Cocoa Productions” in CT. David produces and writes music for Hip Hop, R&B, Gospel, Jazz, and Dance artists. With 8 CD’s under his belt and many collaboration CD’s, David has definitely gained his place in the music world as a player, songwriter and producer. Be on the look out for the upcoming DVD!

As a solo performance I need a sound system that would allow me to have at least 1 stereo input for accompanied music on ipad, 3 mono inputs (one xlr and two 1/4" inputs), a stage monitor and at least 2 house speakers, s small table for merchandise, bottled water.

at least a 6 channel powered mixer