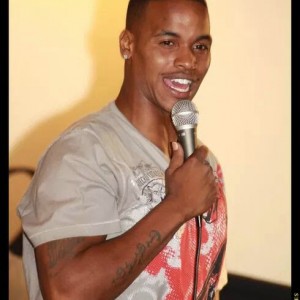 Darryl Damn was VERY funny. He arrived on time and was very accommodating. Very easy to work with. and willing to help in any way we needed him. He was communicative and available to take calls.

Price Range: $300 & Up depending on event and time needed.

Expect to laugh out loud no matter what your mood is upon entering, when you leave my show you will want more & more. My ultimate goal is to give back to the people of the world by making everyone laugh and touching their souls through comedy and if I'm not funny you can slap me!

Was born in Trenton, New Jersey on October 12, 1980. He relocated to Atlanta, Georgia at the tender age of nine and was raised by a single mother who he credits with being his motivation and inspiration. In addition, he is the father of four beautiful children who have kept him grounded; and, who he works to give everything he did not have coming up and more.

Darryl has been doing comedy on a professional level since 2001, however, his mother reports that he has been making everyone laugh since as far back as she can remember! His motto is "work hard while you’re young, so that you can enjoy the perks while you’re young." Moreover, Darryl Damn has appeared on well-renown shows such as Comic View, Def Comedy Jam, and appeared on TV 1’s “Who’s Got Jokes.” He has also performed at a slew of colleges and comedy clubs all across the nation i.e. Cincinnati’s Funnybone, Chicago’s Jokes And Notes, Florida’s Improve, and Detroit’s House of Comedy just to name a few. He’s also been in the video Takeoff by Young Dro and Never Scared by Bone Crusher, and such films as Lottery Ticket, Comedy Club, and independent film Baby Boy Don’t Get Your Haircut At Da Last Dragon Barbershop Dis Friday, Tyler Perry's The Haves & The Have Nots, Love Thy Neighbor, & If Loving You Is Wrong.