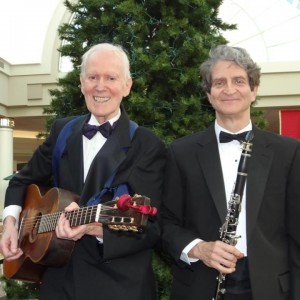 Classic Jazz Duo. Great music of Jerome Kern, Cole Porter, Harold Arlen, and more. Songs like "It Might as well be Spring", "Just One of those Things," "I Remember You," "P.S. I Love You." Between lyrics by Johnny Mercer, and melodies by Irving Berlin and George Gershwin, there is certainly a lot to like here.

Be the first to review Classic Jazz Duo

Frank Hamilton is known for his fine jazz skills both as a singer and as a guitarist. He also has a rich folk music history, having performed with Woody Guthrie, and later with Pete Seeger's The Weavers. He is the co-founder of the Old Town School of Folk Music in Chicago, Illinois, and about to open a school with the same philosophy in Atlanta.

Bill Rappaport has played jazz from his high school days, and, until his retirement in August, 2015, was a member of the Atlanta Symphony Orchestra. He has recorded with Ron Hockett and Bob Haggart on the Jazzology label.