Prelude from Cello Suite No. 1 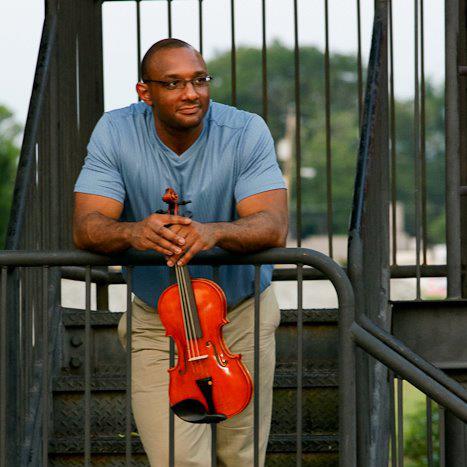 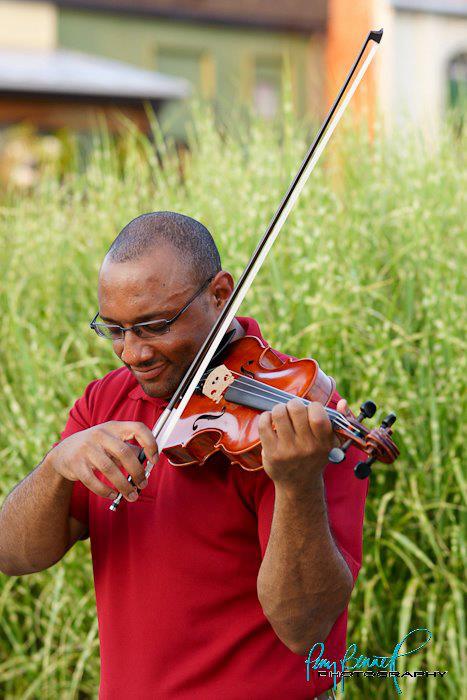 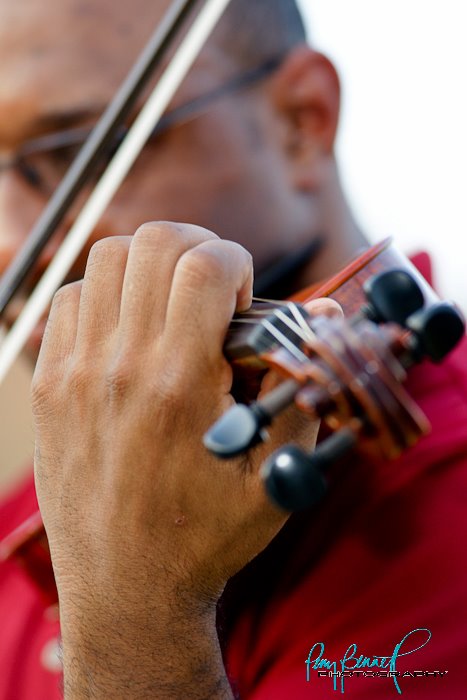 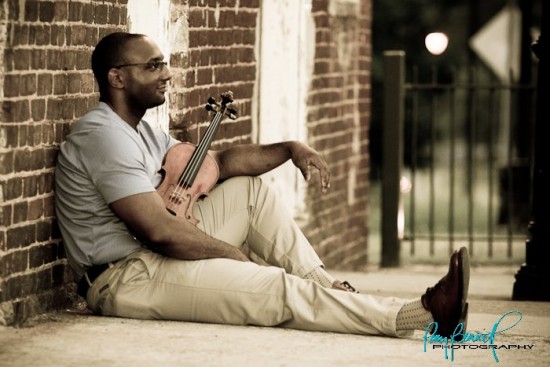 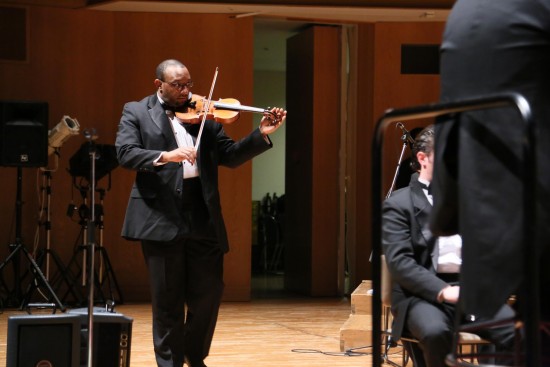 C. Gerome Stewart, Concertmaster of the North Charleston POPS!, has been playing the violin for over 26 years and has performed with orchestras throughout Georgia, Alabama, Mississippi, Indiana, South Carolina, and Florida. Mr. Stewart holds a Bachelor of Music degree in Violin Performance from Columbus State University and a Master of Music degree in Violin Performance from the University of Louisville. He has toured professionally as a violinist with the Carl Rosa Opera Company, New Sigmund Romberg Orchestra, Hollywood Concert Orchestra, and The New York Gilbert and Sullivan Players.

Gerome was amazing! Extremely professional. Music was of the highest quality. All my guests raved about the music provided during the ceremony. I will definitely use him again.

Gerome and Ian were amazing, they played all the music we requested. They executed a fantastic performance, everyone at the event was amazed, and talked about the great choice we had made. We are very happy and wouldn’t want to have chosen anyone else. We highly recommend them.

Mr. Gerome was very professional and easy to work with! He was fantastic and played beautifully

Gerome,
Thank you for your services. The music made our day even more special.

We had an outdoor wedding. Gerome and his associate came in on time, set up very quietly, and played beautifully! It all went very smoothly. I would highly recommend Gerome.

Treat For the Soul

Gerome made our day with the wonderful feeling he elicited in us and our guests. He has a huge repertoire to pull from and he played beautifully. We received many comments on how much he and his single instrument added to our ceremony and reception. I couldn't help stopping and simply listening, despite the flurry going all around.

I hope I have the opportunity to include him in future activities.

C. Gerome Stewart helped insure my event was a success.

I found C. Gerome Stewart to be very easy to work with. He was accommodating and although the room for the function was already beautiful, the violins insured the right mood. Very professional and on time.

Perfect for our daughter's wedding

Gerome (and two fellow musicians) played the prelude and ceremony music for our daughter's wedding at The Walters Farm in April. He offers a large catalog of music, but was willing to work with us on other music selections, tempo of certain songs, etc. Their performance to set a beautiful tone for the wedding, and we hadn't y compliments from our guests.

Gerome was timely and responsive in our correspondence, and he was a pleasure with whom to work.

Gerome did a wonderful job at my outdoor wedding at Lake Lanier Islands. He was great to work with, on time, professional and his music sounded amazing.

From our first meeting, Gerome was professional and responsive. He quoted me a very reasonable price for music pre-wedding and for the ceremony. We worked together on my vision for the day and song selection. His repertoire includes the classics as well as some modern pop selections. We were able to come up with a blended selection for the processional. When I heard him playing as I walked down the aisle, it was very surreal. Gerome plays beautifully and made the day feel complete. He played an important part of one of the most important day's of my life. If you have an event needing a violinist, you can stop looking and immediately book Gerome; you will not be disappointed.

Gerome did an excellent job, very professional, arrived on time, played excellently. There are so many things to keep track of when planning a wedding, but music was not something I had to worry about at all. Gerome let me know exactly what he needed and executed his job perfectly without prompting, checked in with me as the date drew closer and did everything perfectly. A true professional. I am so very greatful and highly recommend his work.

C. Gerome and his string quartet played for our son's wedding in Birmingham, AL at the Birmingham Botanical Gardens. Gerome was very professional and helped me thru the entire process of selecting music to arranging a special piece requested by the bride. He stayed in contact with me right up to the evening of the wedding. The music was beautiful. All members, along with Gerome were extremely nice. Many compliments were made from the guests about the beautiful music. I would book again with Gerome for sure!! Thank you so much.

Gerome and his associate played at our recent wedding and they were wonderful! He was extremely professional and easy to work with. We chose music from within his library, but he also offers to do custom arrangements if you desire. Everyone complimented us on how beautiful the music was for our ceremony. I would highly recommend Gerome for any event as he is incredibly talented and great to work with.

Mr. Stewart and his cellist performed at my wedding ceremony and during the cocktail hour. The music was beautiful and moving. If you are seeking a violinist for an elegant event he is perfect. Mr. Stewart is extremely professional, he returned emails immediately, answered all of my questions, possessed an extensive playlist and was extremely punctual. There are so many things to worry about when planning a wedding- if you book Mr. Stewart that will one thing you will not worry about, he is excellent. I am so glad I chose him and would book him again!!!!

Outstanding Addition to Our Wedding Ceremony!

My groom and I had talked multiple times while we were dating about how much we both enjoy the sound of the violin, and my favorite love song for quite awhile has been "Make You Feel My Love". As a surprise for my groom, I decided to hire a violinist to play this song for my entrance and also to play our recessional song. C. Gerome Stewart did an outstanding job arranging and playing my entrance piece and playing our recessional! I was so very satisfied and pleased by his performance and would highly recommend him!

I had the honor of singing along side Mr. Stewart's string quartet for a wedding last month. He was able to provide a skilled transposition of my songs and he and his group played with skill, beauty, and musical sensitivity. They really created an atmosphere of elegance before and during the ceremony.

Gerome performed for my wedding ceremony and he sounded amazing! He was very easy to work with and was very accommodating. The music was very beautiful.

I was very pleased with Gerome from the very beginning. He was prompt in sending me a quote when I first reached out to him via gig salad. He communicated with throughout the process leading up to the event. The day of the event he came at the time he promised, dressed appropriately for the occassion and performed beautifully. Everyone enjoyed the music! Gerome even when above and beyond by picking out a special christmas screen saver to play on the monitors for me. It gave that extra special ambiance I was looking for. I am extremely happy and would totally use Gerome in the future!

Wonderful! The music was beautiful. He was very professional and well prepared.

Very professional! He added the right ambiance to our event. Punctual and ready to perform upon his arrival. Highly recommended to bring class and elegance to your next celebration/event.

We booked Gerome Stewart and his string trio for our wedding ceremony and post-wedding cocktail hour. We asked Gerome to arrange not one but three songs for our ceremony! He did a fantastic job with the arrangements and was very reasonably priced.

Honestly, we could not have been happier with the whole experience. He showed up 1.5 hours before the ceremony, as well as doing a site visit pre-wedding to determine the best place for the trio to be located. He was quick at getting back to emails, and always available by cell.

Talented and professional. Thanks Gerome and trio for such a great experience!

Gerome did a beautiful job at my wedding. He was punctual and played exactly what I wanted. His timing was perfect! I would recommend him to anyone wanting a professional violinist in their event.

Music To My Ears

Gerome was such a blessing for us to find. He was timely and efficient in responding to my emails and phone calls. He went out of his way to adapt to what we wanted, but still using his musical expertise to help us achieve a professional sound. He was EARLY to the wedding. Who doesn't love that? Thank you Gerome for making it such a special day. Definetly a 5 star experience.

Gerome Stewart, Concertmaster of the North Charleston POPS!, began playing the violin at the age of ten. At seventeen, Mr. Stewart was a part of the Walt Disney World Millennium Celebration Orchestra that performed during the Super Bowl XXXIV Halftime Show in Atlanta, GA. In 2000 he attended Columbus State University, studying with Patricio Cobos and earning a Bachelor of Music degree in Violin Performance. After graduating, Mr. Stewart attended the University of Louisville, earning a Master’s degree in Violin Performance while studying with J. Patrick Rafferty. Throughout his college career, Mr. Stewart had the opportunity to perform in master classes with artists such as Cecylia Arzewski, Robert McDuffie, Midori, György Kurtág, Eroica Trio, Diaz Trio, Turtle Island String Quartet, Miami String Quartet, and Takács Quartet.

Mr. Stewart has performed with many orchestras throughout the Southeast including the Tuscaloosa, Huntsville, Columbus, Savannah, and Valdosta symphonies and is currently an active member of the Hilton Head Symphony Orchestra. He has toured professionally as a violinist with the Carl Rosa Opera Company, New Sigmund Romberg Orchestra, Hollywood Concert Orchestra, and The New York Gilbert and Sullivan Players. In addition to his orchestral career, Mr. Stewart has had the pleasure of performing with such artists as Evanescence, Lindsey Stirling, Wayne Newton, Sarah McLachlan, Michael Bolton, Mannheim Steamroller, and the Trans-Siberian Orchestra, as well as performing for touring Broadway shows, including Phantom of the Opera.

I can provide music from classical to pop. If a specific piece is requested and there is not sheet music for the specified instrumentation, an additional fee will be necessary for arranging the music.

Covered area if performance is outside