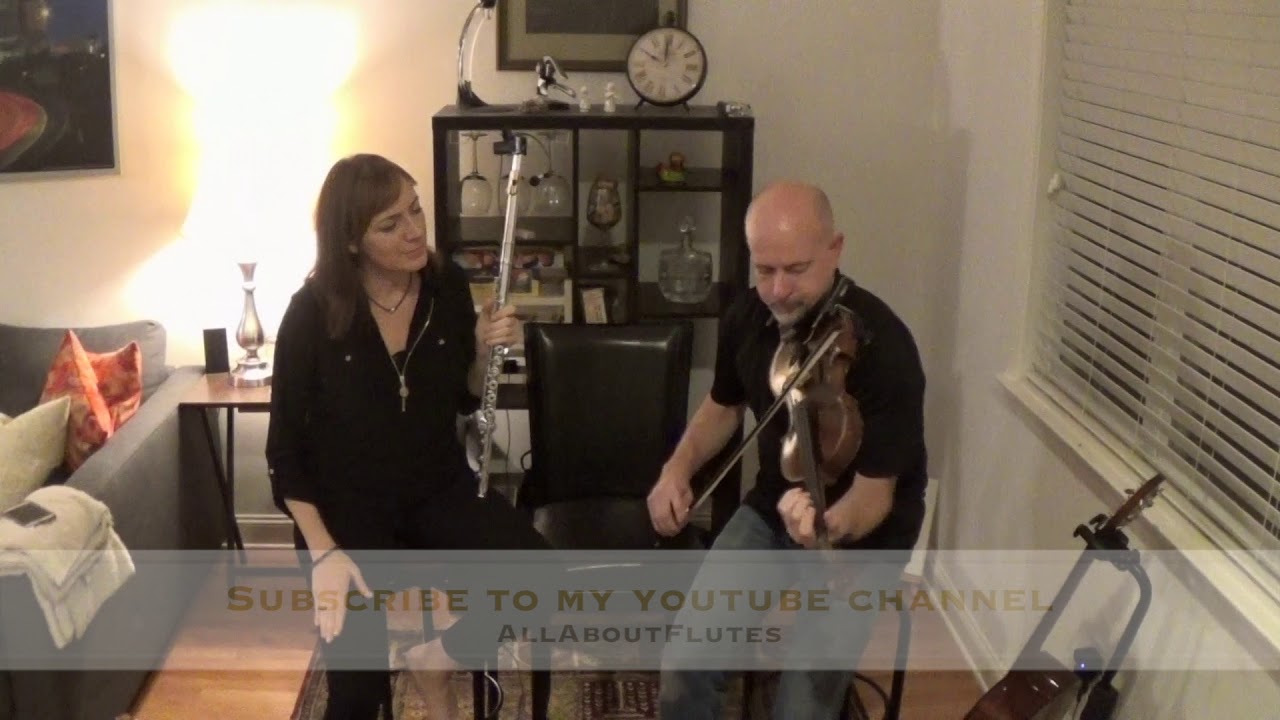 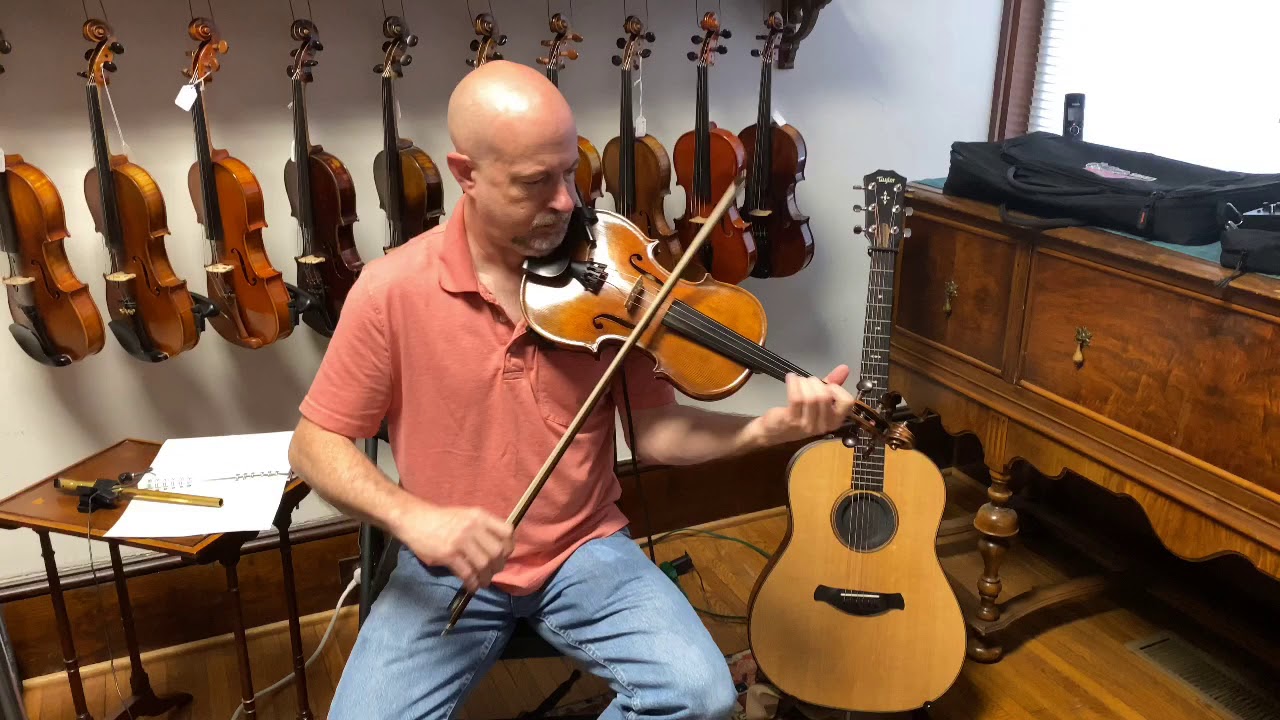 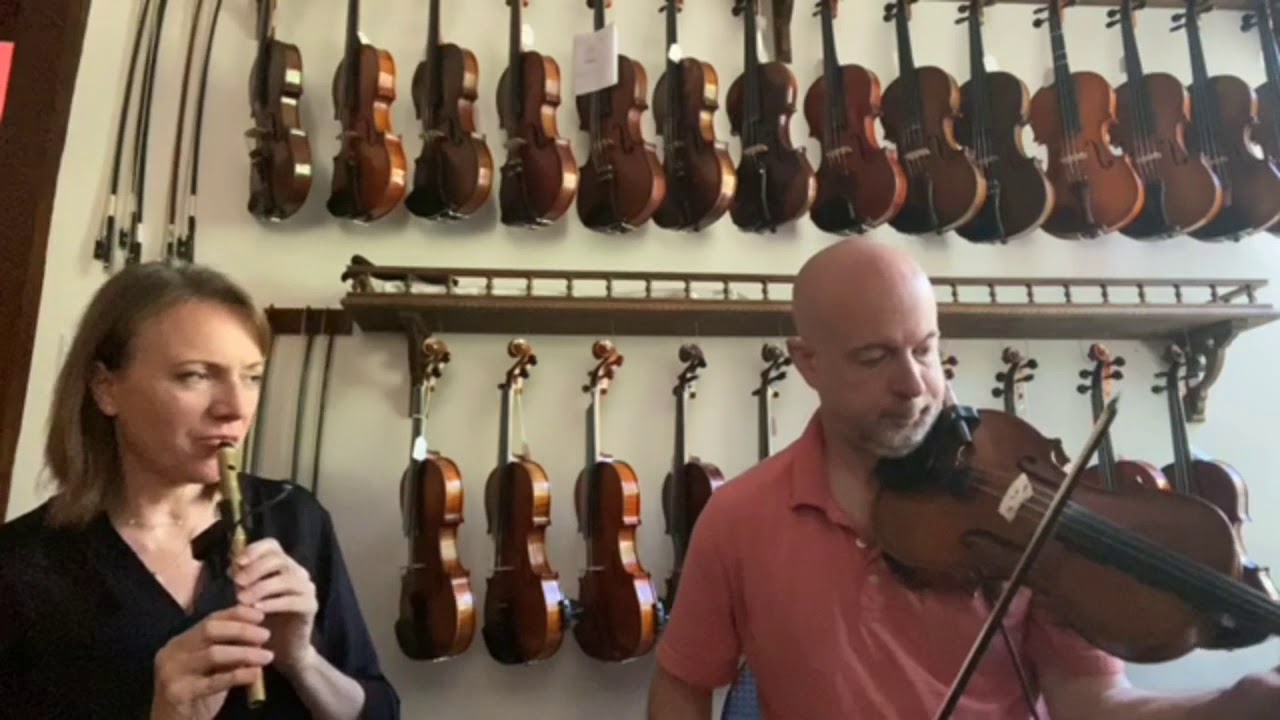 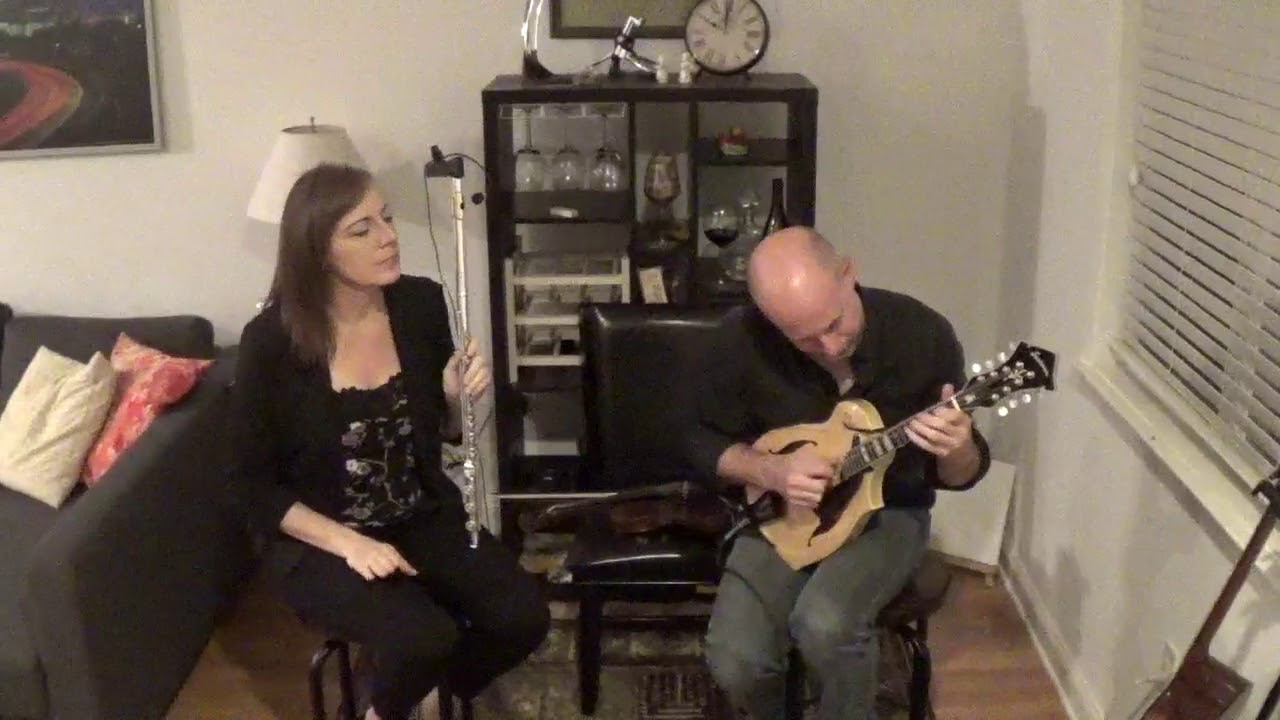 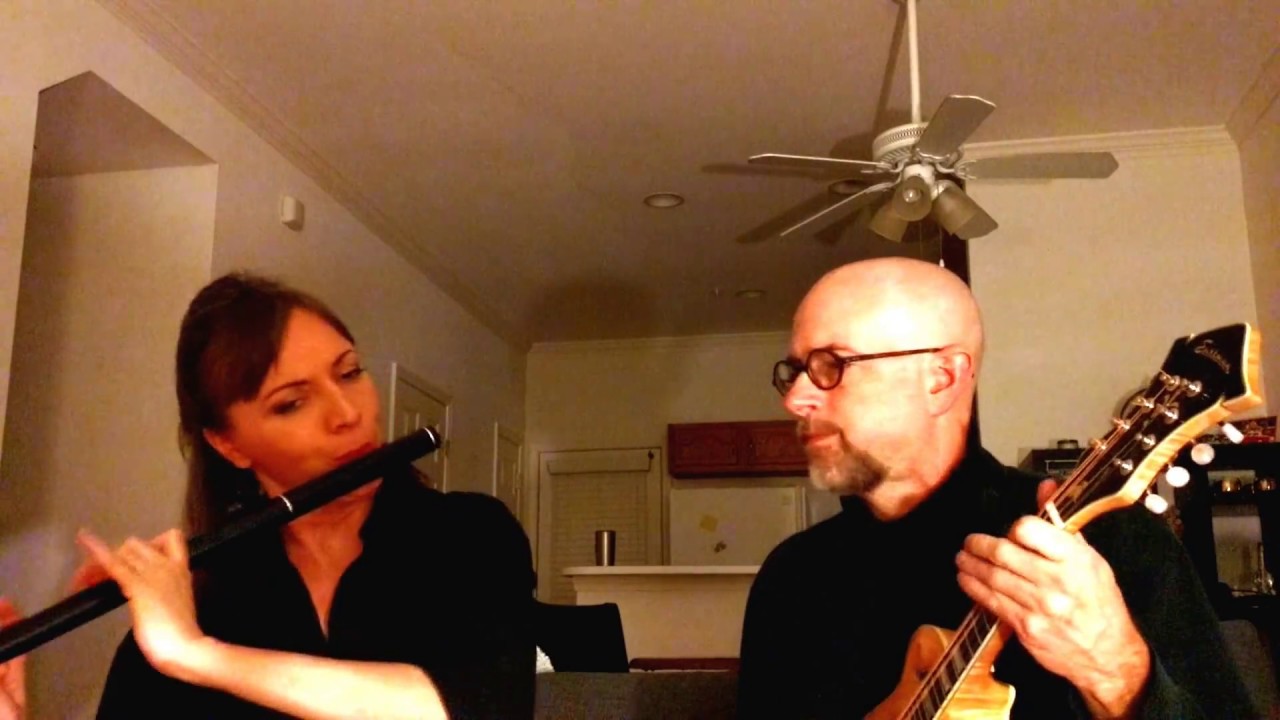 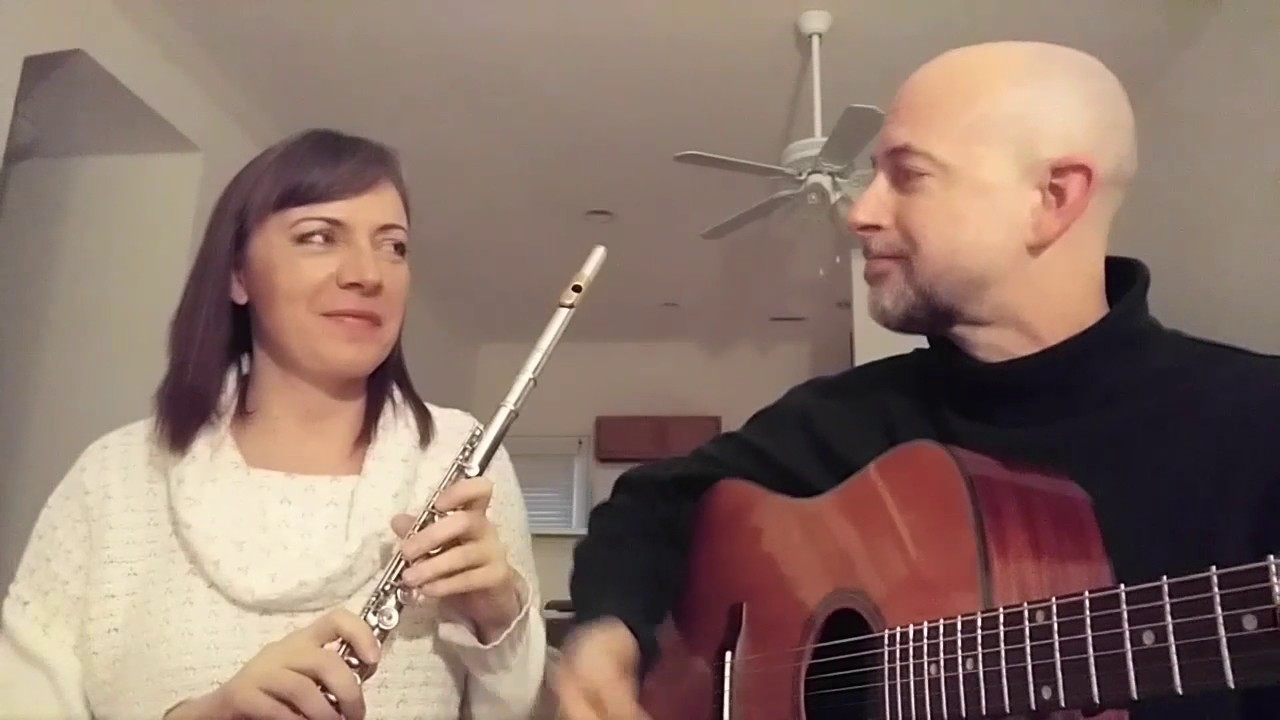 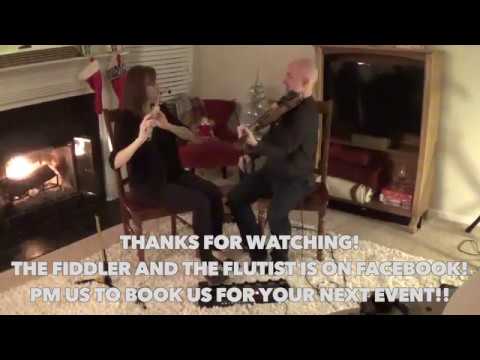 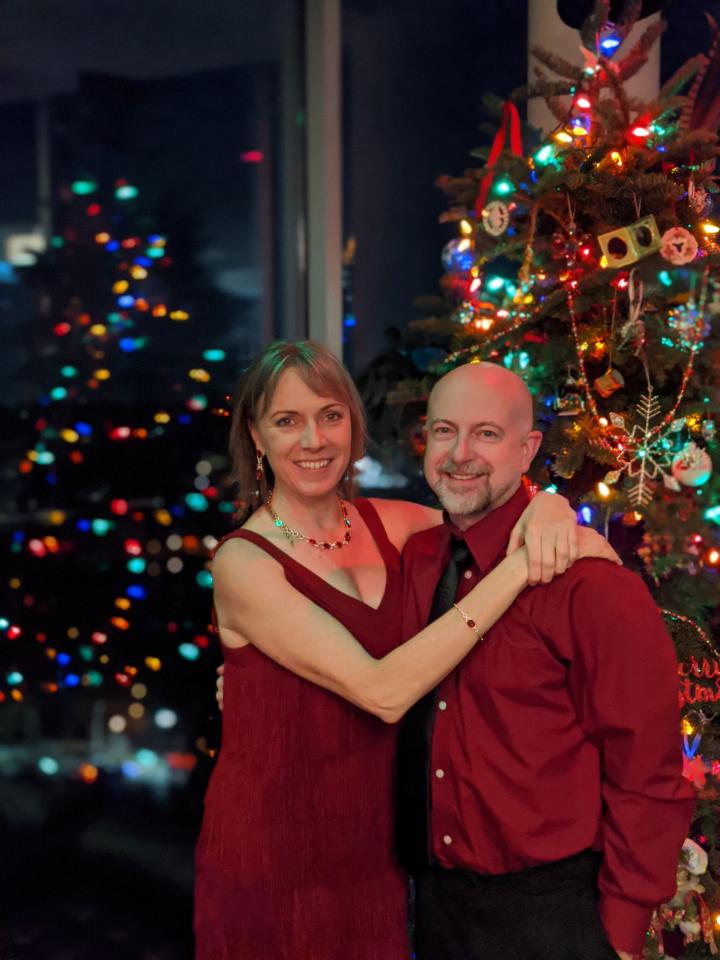 After finishing a Christmas party gig 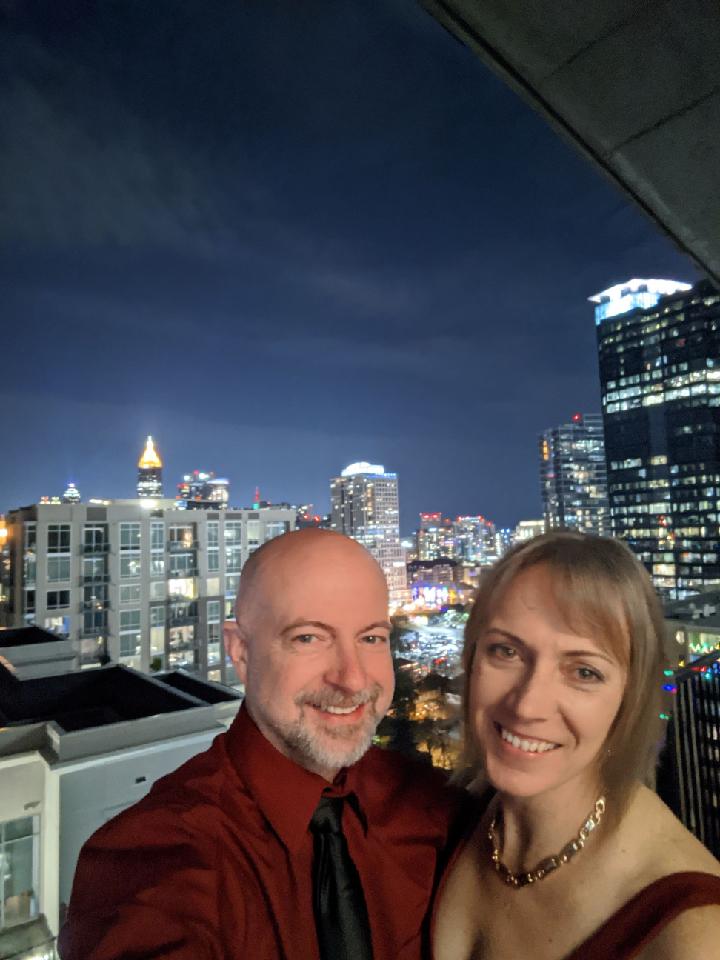 We're new to GigSalad but have 30 years experience performing. We fuse bluegrass, Celtic, pop, and classical music to create a personalized sound for each gig we play. Our fiddler was featured in a article in Strings Magazine, has won the Galax Bluegrass Fiddle competition 4 times, and was honored by the NC Bluegrass association. Our flutist is a graduate of the UNC School of the Arts, she is a former musician with Immigrant's Daughter. We perform acoustically or can incorporate modern technology/looping to achieve a more upbeat sound with drumbeats. We each play many different instruments and change throughout our show.

We had a the Fiddler and the Flutist play during a wedding ceremony and cocktail hour. They were absolutely fantastic! They were incredibly professional, played a great variety of music including a bunch of requests, and had wonderful energy. They really set the mood and made our event very special. Thanks for everything!

Julianna,
Thank you for your kind words! We felt privileged to be part of the wedding. The wedding and venue were gorgeous! The guests were s lot of fun as well!! Feel free to reach out to us should you need music again.
Kind regards,
Sharon Fogarty

Aimee, we had so much fun at your mother’s birthday party. The guests were all so friendly. We enjoyed the after party getting to know you and your mother a little more as well. Thank you for having us come perform for your event! You were the perfect audience! The home made pizza was amazing as well!!

Sharon and Glen played for my son's memorial service. They were easy to work with, very professional, respectful, warm and personable. Their music was absolutely beautiful, from the Celtic instrumental selections to the hymns. They soothed our souls and breaking hearts while helping us honor our son.

Penny,
It was an honor to be a part of such a genuine and spiritually moving service. Please know that our hearts go out to you and your husband at this difficult time.
With Warner regards,
Sharon and Glen

The Fiddler and The Flutist not only sounded great, but they were super engaging with our patrons. We received multiple requests to have them back which we will for sure.

Hi Greg,
Thank you! I can’t express enough how much fun we had performing at your venue. We are looking forward to returning for the halfway to St Paddy’s day celebration!!
Sharon

Exceedingly easy to work with. And they have the ability to bring other artists with them. Wonderfully Versatile as well!

Thank you Mike! We understand having to be flexible during these challenging times!!

F&F hit all the buttons, with confidence and flair

For our annual Awards Gala banquet at DRI International, we augment the presentations with custom music cues based on well-known songs and instrumentals. Some years this music is pre-recorded, but this year, we had the budget for live musicians. They also needed to perform strolling music (light classical, Celtic, and pop) for the charity auction portion of the evening.

The Fiddler and the Flutist were all we hoped for, and more. They put in advance rehearsal time working through the sheet music and audio demos I provided. Sharon is a classically trained, technically nimble flutist with sharp sight-reading ability; violinist Glen is a seasoned improviser and expert in folk and other traditional genres. Together, they made a sweet, polished sound that infused our formal cocktail reception with elegance and sophistication. On stage, they were well-prepared, consummate professionals, hitting each cue with confidence and flair. After the end of the planned show, F&F continued with an impromptu jam, an assortment of fun music that delighted our cheering guests for an extra hour.

A member of the military honor guard who performed presentation of colors to open the stage show remarked that he had never before heard the national anthem played quite like the Fiddler/Flutist’s unusual, beautiful arrangement. As the DRI internal staff member in charge of the music booking, I enthusiastically agree. - David Zee, Business Development Associate, DRI International

Wow David! Thank you so much for taking the time to write such an incredible review! Glen and I really enjoyed working with you on this event including the behind the scenes preparation. We love working with super creatives like yourself! You were clear with your vision and incredibly organized! We knew from the first time we talked that we were working with a pro! The after jam was the icing on the cake! We were all three exhausted but who could pass up an opportunity to let loose and entertain freely when all the hard work was behind us! There were so many magical moments at that event we will never forget! Keep doing what you do! You're incredible at it!
Sincerely,
The Fiddler & the Flutist

We truly enjoyed your performance! The music and your enthusiasm were the perfect addition to our special day! Thanks for being a part of it!

Thank you. We really enjoyed performing for your family, they were all a lot of fun. The Irish dancers we a perfect addition too. You did an excellent job planning the details of your event.

Excellent sound; Easy to work with

Glen and Sharon were incredible. Their unique sound was the perfect backdrop to our corporate grand opening event. They were flexible and accommodating with changes to our schedule of events, and our group of 200+ offered positive compliments to their music selection -- a mix of holiday songs, as well as other tunes -- and the quality of sound.
I've already dropped their names to colleagues looking for a unique act. They won't disappoint.

Glen did an amazing job being flexible at our community, engaging with our residents, and exuding professionalism. He was prompt, well prepared, and very easy to work with. Glen was very well complimented by our staff, residents, and our families at our event!

We will certainly keep Glen in mind for future events!

The Fiddler & The Flutist

“Glen and Sharon are virtuosos on their instruments. They’re both incredibly versatile musicians. Their playful energy performing together is fun to watch and leaves audiences wanting more.”

Our audiences are always blown away by our musical diversity, level of musicianship, energy, entertainment quality, and sound quality. We produce shows that we call musical journeys. Sharon believes that every event is like a movie and the music is meant to draw out the emotions of those experiencing or watching this "movie". We ask a lot of questions so that we can get every detail perfect from what we need to wear, to the level of sound, to the genre of music. We can provide our own sound equipment for the more intimate settings. We both have many hours working in a recording studio so we sound and all about balance and levels. We each play a multitude of instruments and can create a show where the instrument changes are part of the entertainment. We also know when we need to be background music. We're proud to say that John Tosco, in Charlotte, has used us many times for events and so we're high quality and extremely trustworthy.

Who is Glen Alexander? He just may be the most influential fiddler in North Carolina. Glen grew up in Pfafftown, a region of Winston-Salem dominated by Gospel and Bluegrass music. Growing up surrounded by a family of musicians he thought it a practical question to ask his classmates "What does your dad play?"

He started playing fiddle when he turned eleven and learned to play through school orchestra. He had many local inspirations and taught himself to improvise by sitting in with his fathers band, Muddy Creek. He snuck away from home when he was fourteen to play his first competition in Yadkinville, where he won his first ribbon, 2nd place. A year after, he won his first Blue ribbon at Mt. Airy, and competed and won almost everywhere he entered. In 1998 he won Galax, the most coveted prize for a fiddler on the East Coast. Now he has four Galax Blue ribbons. You can also see his name on over 300 CD's he's recorded fiddle on, and he has shared the stage with many of today's top Bluegrass artists.

Sharon Fogarty was born in Ireland but grew up in Kernersville, NC. She grew up listening to a wide range of music from Irish folk, classical, as well as the American folk rock genre of the early 70s. When you hear Sharon perform you can hear how she has been influenced by this blend of music. She loved the phrasing of Karen Carpenter, the haunting sound of an Irish slow air, the smooth and flowy flute sounds of James Galway, and the energy Tina Turner brought to the stage.

Sharon doesn’t remember a time when she wasn’t drawn to music. She was self-taught on several instruments until she finally chose flute as the instrument she wanted to pursue professionally. After graduating from UNCSA, Sharon was the Principal Piccolo player for the Piedmont Wind Symphony for several years, has subbed many times on piccolo for the Winston-Salem Symphony, but keeps busy mostly as a folk musician playing flute, Irish flute, and penny whistles.

Sharon has had the pleasure of sharing the stage with Winston-Salem's local favorites Rhiannon Giddens, Martha Basset, Luke Payne, and Bill Smith. She was a founding member for the former Group Immigrant’s Daughter and The Lanterns. She is currently performing with the popular, Charlotte based, swing band The Little Big String Band, and the duo The Fiddler and the Flutist (with champion bluegrass fiddler Glen Alexander).

I'll list what's requested more than anything but we play a lot of Folk, Swing, can do some pop songs, incorporate classical music. We create a musical journey based on the venue, audience, and event.
Red Haired Boy
Star of the County Down
Sally Garden
Yearning (original by Sharon Fogarty)
Big Sciota
Pachelbel Canon in D
Farewell to Erin
Congress Reel
Lady Be Good
Red Apple Rag
Bach Cello suite
And much much more.