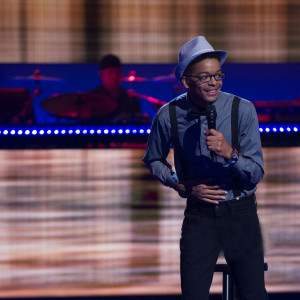 I perform stand-up comedy for any event

Be the first to review Brian Doby

Standup Comedy for mature audiences, usually ages 18 and over. Small or large audiences.

Brian Doby is a 23 year old native of Junction City, Kansas and was raised in Topeka Kansas. He started doing standup in September of 2012, when he went to his first open mic at Stanfords Comedy Club in Kansas City. "I watched about 25 experienced comics go up before me. I was called up second to last, I did 3 minutes of material and had the crowd laughing through my whole set, more than they laughed for any of the other comics" says Brian. He continues, "That's when I decided comedy was for me."

Brian only attended one more open mic in 2012, two months after the first and in 2013 submitted video of one of his open mic sets to the American Black Film Festival's 1st ever "Comedy Wings" competition and was named as one of nine semifinalists out of hundreds of entrants across the U.S. (which he did again the following year). Though he didn't win the competition, Brian felt more sure than ever that comedy was the way to go after performing in the semifinals at the Comedy Store in Hollywood.

"I was the least experienced and youngest comic on the bill, others have been on television multiple times and had been doing this for ever, and I was right there with them. I did 7 minutes in a famous comedy club, in a famous comedy city, in front of celebrity judges and a crowd of people who take comedy very seriously... and i killed. It was the best feeling loss I've ever experienced" says Brian "I was comfortable in Los Angeles, and I felt like I belonged there."

After that competition, Brian returned to Kansas and began getting booked for local shows around the area but nothing major and usually nothing paying... and when he couldn't get booked he set up his own shows and booked other comics on them along with himself.

Describing his influences, Brian states "I don't have many influences in comedy, I just like to be who I am on stage, no different then my everyday self. I do however have many favorite comedians because of their unique styles and senses of humor. I could go for days but I love to watch Louis CK, Bill Burr, Dave Chapelle, and Bernie Mac to name a few. My style is more like Dave Chapelle if I had to make a comparison. I don't get on stage with an abundance of energy, I don't act out my jokes or hop around the stage during my sets... I just stand there and talk to the audience...I like to believe that my jokes speak for themselves. I speak about a broad variety of things but one thing I do a lot of material on is my family. Married life, father life, the things my daughter does, how my brother and sister where growing up etc., I get the best material from real life situations and occurrences. I do a lot of storytelling. I talk about my financial problems, women, differences between races, amongst other things."

Brian has a true passion for comedy and calls it one of his true loves. "I love comedy. I feel making people laugh is the most rewarding job ever. The feedback you get from comedy is on-the-spot, right in front of you. It could be good or bad, but when its good the feeling is unexplainable…"

People ask where he wants to go with comedy. The answer is, wherever it can take him. "I want to become a household name, I want to do television, I want to do half hour specials, hour specials, late shows, comedy concerts, tours and the whole nine. I want to record standup movies as well as standup albums. I want to be involved in anything and everything standup. I want to make a living doing what I love, thats all I've ever wanted to do and a career in standup is as good as it gets" says Brian.