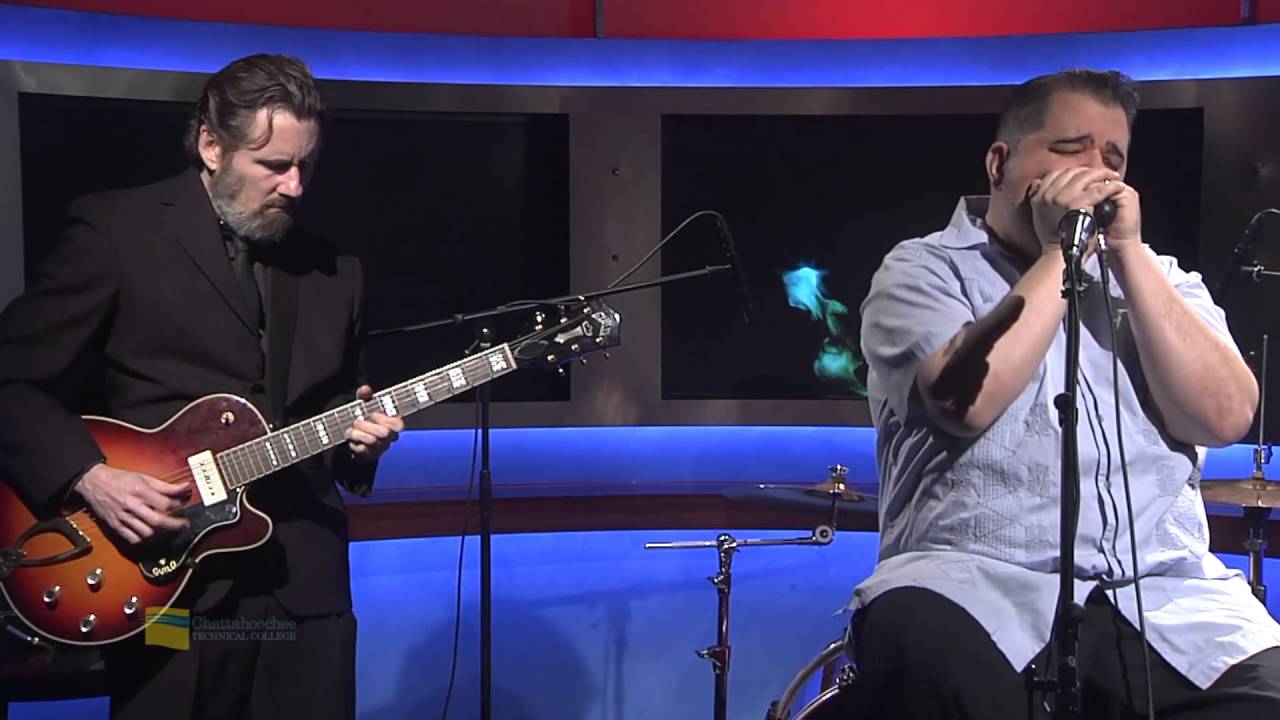 Having some Wolf style fun at the TV Studio 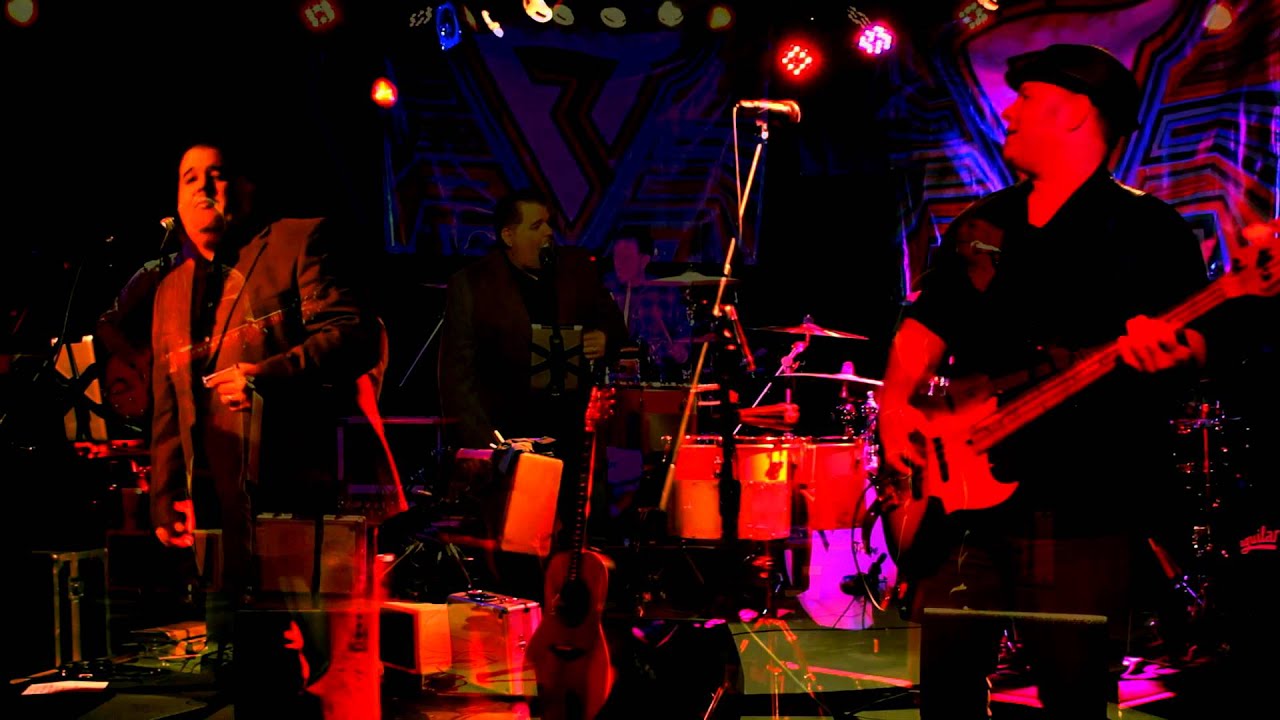 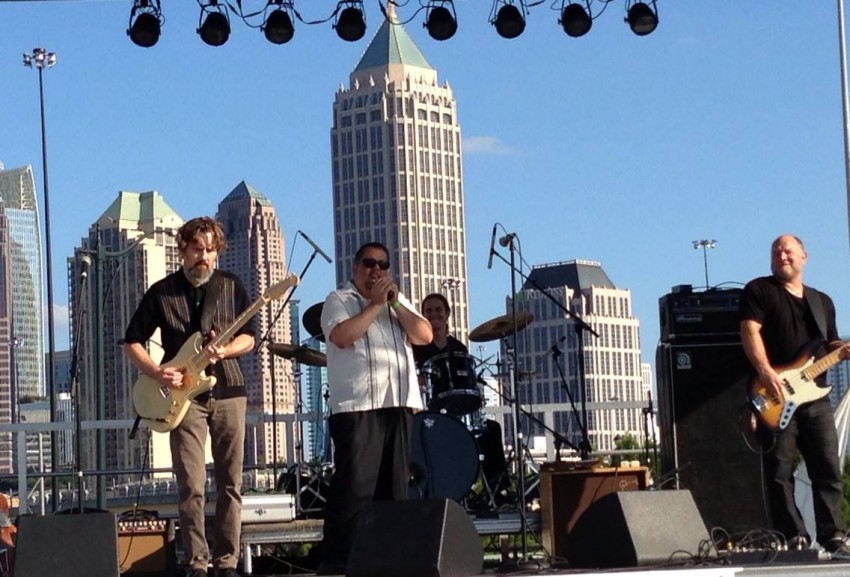 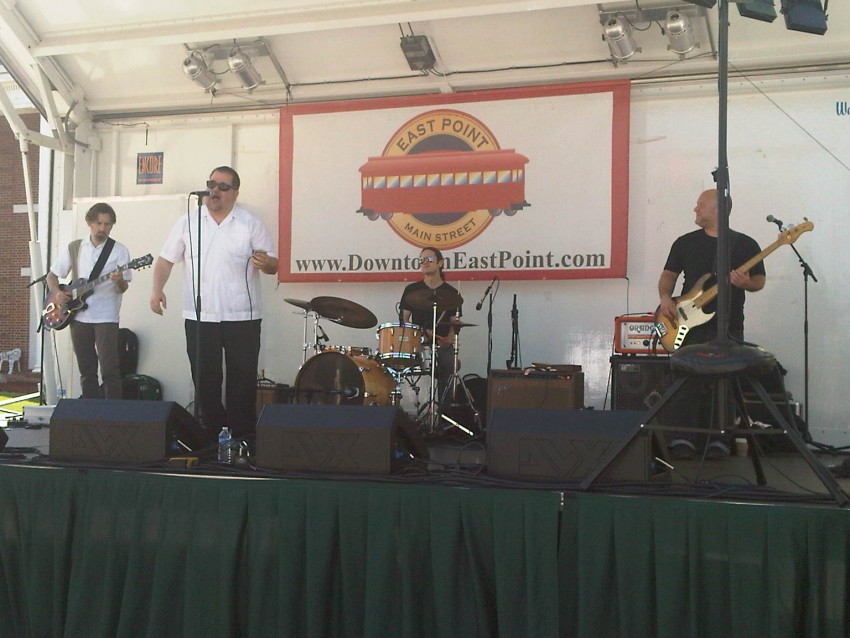 The Breeze Kings CD's. Buy one! 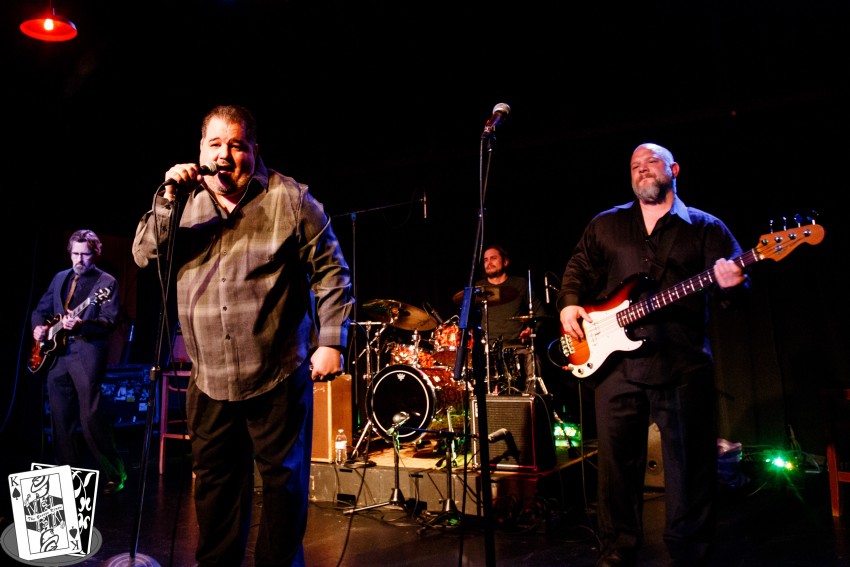 Live at the historic Avalon Theater in Decatur GA 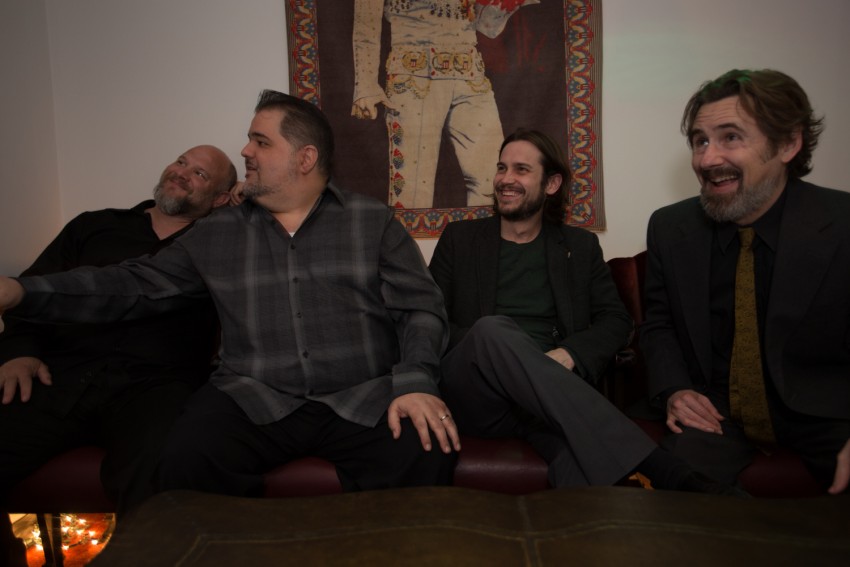 Backstage goofin' around underneath Elvis 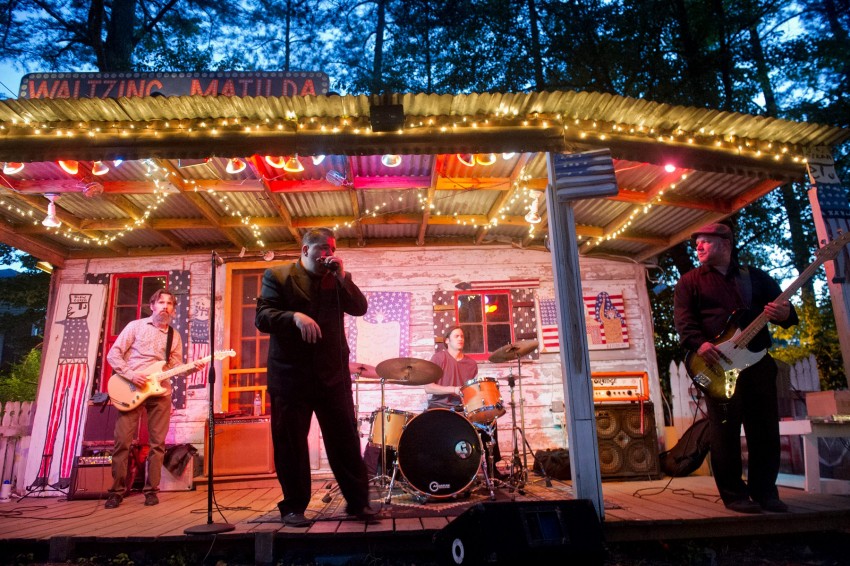 Live at Matildas Under The PInes in Alpharetta GA 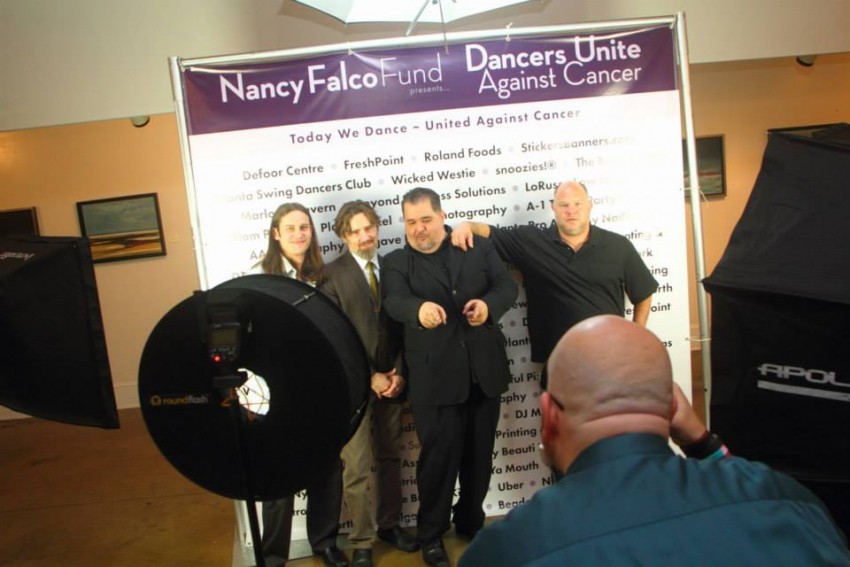 Oops, caught in the photo booth 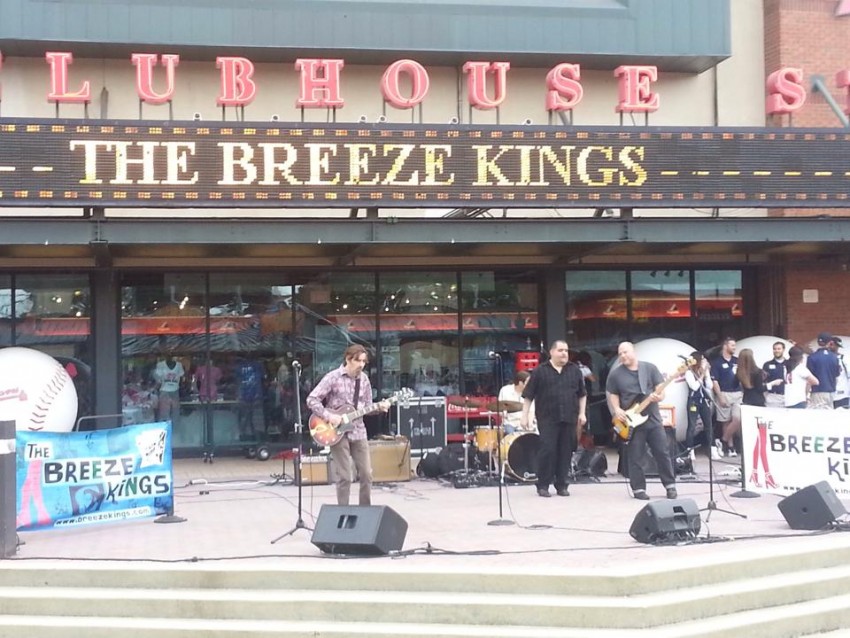 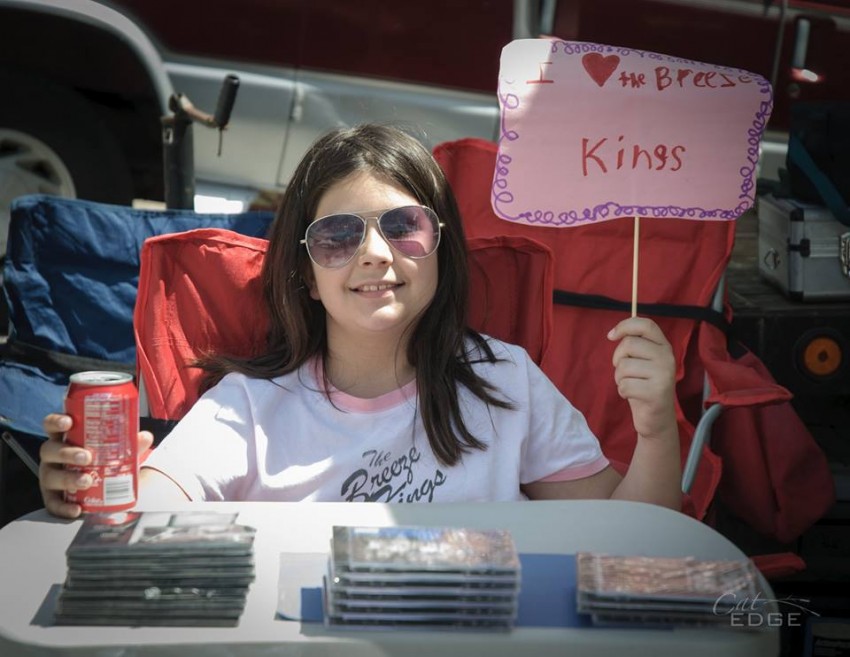 Half of our dedicated merchandise team

True blues in the old school tradition! The Breeze Kings are 10 time winners of Creative Loafing's award for Best Blues Band in Atlanta. They currently perform 150+ shows per year at clubs, festivals and private events all over the southern USA. The band has recorded 4 critically acclaimed CD's and has also completed four muti-date tours of Europe.
Cool & fun. Energetic & unique. Experienced & professional. If it's a real blues band you are looking for, search no further. The Breeze Kings never disappoint.

Had to postpone till after xmas

Cool Blues played in many ways

They play all kinds - Memphis, Chicago and their version of the "Down and Dirty Blues" is exceptional. Whether you want to tap your feet, slap your thigh or dance to the beat, they make you come away satisfied with what you've heard.

Thank you Robert. It was our honor to be a part of your day. All our best to you and Kathy.

We booked the Breeze Kings for a large gathering at SweetWater brewery on the night before my wedding, and they were amazing. They have a lot of energy, and the sound is fantastic. I think that they won themselves more than a few fans that night.

Working with Carlos (the lead singer) was very enjoyable and easy. My wife and I don't live in Atlanta, so we were arranging this from out of town. Carlos was very responsive to what we wanted in terms of the evening, and he helped to arrange his own logistics with the venue.

We couldn't be happier!

Thank you Steve. It was a great pre-wedding party and our honor to be a part of it. All our best to you and Kate.

We had the Breeze Kings play at our event in Helen, GA

Band and Carlos were easy to work with, and gave out a great sound. I'd hire them again for our events.

Thanks Al. It was a really cool event, a nice location and a great group of folks. Thanks for letting us be a part of the fun.

The Breeze Kings are a well known 4 piece professional blues band featuring spirited vocals and prominent harmonica and guitar. Clients, guests and Atlanta area music fans will know the name.
The music will have a strong 1950's and 1960's American blues, swing & RnB vibe with top notch musicianship and high dancability.
Lots of experience in clubs, festivals, events, weddings and parties.
Always a well controlled volume, professional look and attitude, and flexibility in any situation.

The Breeze Kings formed in 1997 out of a mutual love for 50’s era Chicago blues. The spark was there and word spread fast. Today, the band performs over 200 shows per year all over the eastern USA and has completed four European tours. Featuring complex guitar parts, explosive harmonica, soulful vocals and super groovy rhythms, their exciting and authentic blend of Chicago, Delta, and other regional blues styles catches wide attention. Show after show, their charismatic energy wins over new fans while their unwavering dedication to time honored traditions earns the respect and admiration of blues purists. They have opened for, and played with, some of the biggest names in blues, performed live on television and radio, and their music is enjoyed worldwide on blues radio and online via iTunes, Pandora, Youtube and Spotify. It’s no wonder the Breeze Kings have won Creative Loafing’s annual Best Blues Band in Atlanta award TEN TIMES and were among the top 10 finalists at the 2005 IBC competition in Memphis TN.

The Breeze Kings have released four CD's on Atlanta's Veritone Records label. With each CD comes a blend of classic blues covers and creative original songs showcasing the band’s roots and its talent. Critics and audiences have received all four CD's very well with glowing reviews and radio play from all over the world.

In addition to numerous club and festival performances, The Breeze Kings are in high demand for private occasions. The band’s distinct sound and absolute professionalism are exactly what clients want for a unique and memorable party, wedding or corporate event.

The Breeze Kings have something special and it makes them one of Atlanta’s, and the south's, most popular and sought after blues bands.

4 piece blues based band featuring harmonica and guitar. Stage plot and input list available upon request.
Lots of professional experience. No situation we haven't seen.
When necessary, we are able to setup quickly with minimal sound check or disturbance to active event.
We are able to work in multiple settings - indoor, outdoor, small space, large space, etc.
We are capable of providing our own production (PA, lighting, instruments) or utilizing client provided equipment.
Client should provide electrical power
For outdoor events, a covered performance area is preferred and clients should have an alternate bad weather plan.

We love traditional blues and are always learning new tunes. This list covers a lot, but not all of them. Have a favorite you want for your event? Just ask.

The Breeze Kings are true lovers of classic blues music from the 50's & 60's and are very well versed in the popular songs of the genre including the hits and lesser known songs of some of America's most celebrated blues performers in history : BB King, Jimmy Reed, Muddy Waters, Howlin Wolf, Little Walter, Magic Sam, Fabulous Thunderbirds
Additionally, our band members are lifetime music lovers and have been performing a long time and are happy to receive requests. We just might surprise you!

Electrical power sould be located near the stage area

We are a 4 piece electric band. Harmonica, guitar, bass and drums. 1 vocal required. 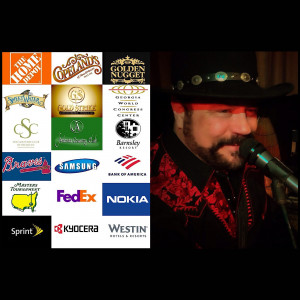 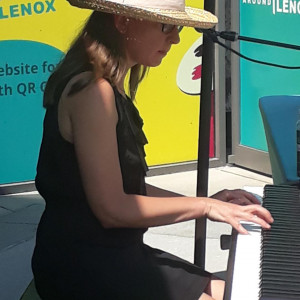 Otho T. said “Yana performed at our holiday party. She was outstanding in her performance of jazz & latin piano standards. She also surprised us by playing guitar!…” 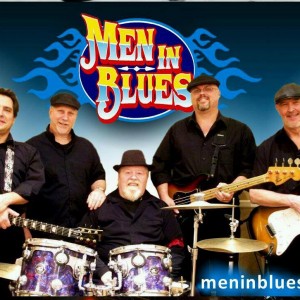 Harrison F. said “We booked Men In Blues for our wedding and could not have been happier with their performance! Everyone we talked to afterward agreed that the band did…” 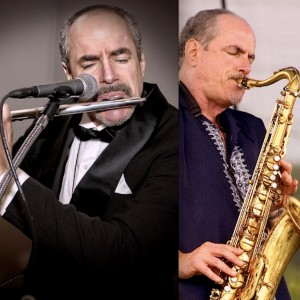 Starr C. E. S. C. said “We initially hired Steven Charles band for our Service Awards banquet. Our leadership thought that it was such a wonderful addition that we asked them…”