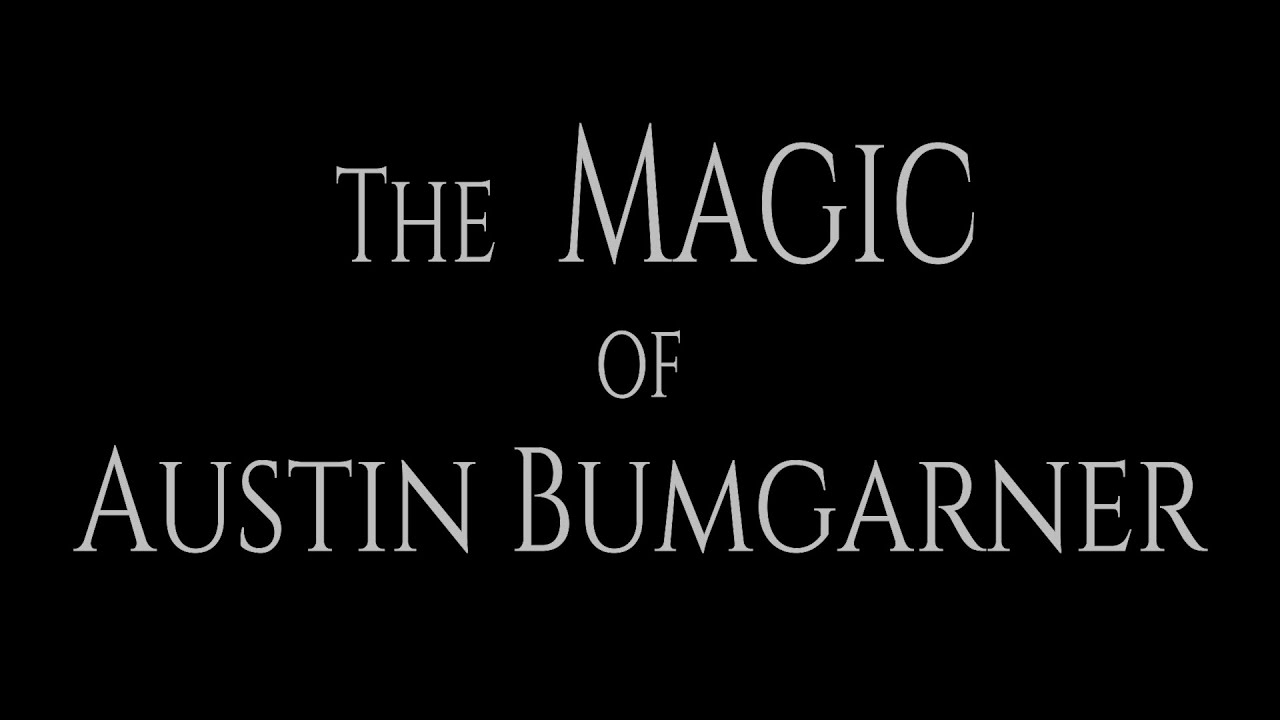 Austin is a Close Up and Comedy Magician who has performed at Restaurants, on cruise ships, and at parties for all occasions for the last 7 years and is currently performing at the Chicago Magic Lounge!

i recently hired Austin for a community tailgate party and he did a great job doing strolling magic for the whole community! I well totally be hiring him again!

Austin can be hired for Close Up and Walk-Around, Parlor, or even Stage Shows!

Close Up
- Austin will travel table to table, and group to group, performing amazing feats of prestidigitation right before your guests eyes!
- The tricks he does with cards, ropes, money, coins, and other items in the close up setting are the same tricks he's been perfecting for over a decade and has performed professionally for 8 years!
- Minimum 1 Hour booking, travel rates may apply.
- Suggested: 1 hour booking for less than or equal to 30 people, 2 hour booking for 30 to 60 people, and 3 hour booking for 60 to 100 guests! Custom scheduling available to nearest 15 minute increments.
- Can be booked on Residency Basis (Recurring prescheduled performances at particular venues and restaurants) at greatly discounted hourly rates! Over 70% Off!

Parlour Shows
If you're unfamiliar with "Parlour Magic", the term simply refers to a booking that's set up as a speaking performance as opposed to the mingling of walk around magic, but still smaller and more personal than Stage Magic. Usually it will involve far more props than walk around (Which is just fill up your pockets and start) but can still be set up and taken down quickly, depending on preferences, with little mess and fuss. Great for everything from birthday to block parties, or even on a small stage at a rented venue or banquet hall!
- Great for groups ranging from 20 to 100 people!
- Either a 45 minute or 1 hour and 05 minute show!
- Can be performed in houses, restaurants, or anywhere with a small stage or even dedicated corner of the room.
- Can be done with or without sound system, a small one can be provided, great for performances for up to 60 guests.
- Light customization to venue, from set up to clean up! (e.g., a routine that spills water and or leaves a mess of confetti, though it might look great, would likely be included in a block party performance set outdoors, but not at a banquet room of a popular pizza chain.)
- Tons of laughs and audience interaction!

Stage Magic
- 45 minute to 1 hour shows, completely separate from Parlour Performance (A 2 hour performance with an intermission can be scheduled to combine the best of all of Austin's magic for as large of a group as you desire!)
- Great for 100+ guests!
- Hilarious, fun, and completely underrated!
- Requires professional stage, lighting, sound system, and staff! This 1 man show takes a village!
- Set up and clean up time take the longest of all 3 booking options.
- Requires a minimum Half Hour Telecom call to discuss venue, stage and backstage layout, sound system and lighting, crew expectations, ticket sales, advertising, Back of Room Sales, set list, and more
- Requires set deposit payed upfront, followed by percentage of ticket sales payed after close of Box Office
- Requires ASCAP and/or BMI Licenses for performance with copyrighted works!
- Great for Large Banquets, Corporate events, Hotels, High Schools, and Cruise Ships!
- General Liability Insurance provided for every Stage show booked, with venue specifically listed on policy before the day of performance, provided by Insurance for Performing Entertainers and Event Professionals.
- If booked more than a month in advance, can be customized in any way you wish, to be specified in Telecom call. Great for making a CEO appear in a magical way or having a good laugh with the Principal!

Austin Bumgarner has been performing magic professionally for 8 years, but has been doing magic as a hobby for over 15! Born and raised in Homer Glen, Illinois, Austin's rise in magic is a pretty different story than most, and would almost seem destined (Be sure to read the story below to find out how)! He learned to perfect Magic ranging from his close-up tricks to grand stage-based illusions and was a member of the Magic Masters of Chicago, and he also studied the performing arts in Chicago. His pursuit of the magical arts was made a bit more difficult when, in 2012, he was diagnosed with Sjogren's Syndrome, a lesser known autoimmune disease similar to Lupis that affects many, including the Professional Tennis Player, Venus Williams. Austin has learned to live with this disease, but it affects many to a much worse degree and there unfortunately still isn't much progress toward a treatment or a cure, so if you would like to aid the efforts and donate toward the research of Sjogren's Syndrome by going to The Sjogren's Syndrome Website.

Since beginning his magic career, Austin performed over 500 shows! He has Performed in restaurants and on Cruise ships, and with over 7 years of performing tableside magic, he hasn't gotten a single complaint from a table! He leaves absolutely everybody happy with his Family Friendly routines, and will leave people guessing and wondering for hours! Often leaving people with souvenirs, whether it's a card or another small item, the volunteer is always left with more impactful memories! Who doesn't remember seeing magic right before their very eyes?! And the guests or customers are always left with a better memory of that evening and place! See for yourself by checking out the Testimonials page! On numerous occasions people have shown Austin that they still had their souvineer, sometimes YEARS after getting it, in their wallet or on their person and always carry it around with them. Which only goes to show that if you want to help make lasting memories, whether in your restaurant or venue, or at your special event, make it Magical.

Key points to know and why you should hire Austin today:

- Over 7 Years of Professional Experience!
- Close-up/Walkaround/Tableside, Parlor, or Stage Magic!
- Austin is available for Magic in Homer Glen, Orland Park, Mokena, Lockport, Lemont, even Downtown Chicago and many other parts of the Chicagoland area! Contact for more information today!
- Hire Austin for Walkaround in 1 hour increments, or for a show ranging anywhere from 15 minutes to an hour!
- Not only does Austin offer the lowest and most competitive rates around, but everybody who has seen a show has left amazed and happy!

How Austin Got Started!

Like many children, Austin had some magic kits as a child, and a number of things that might have contributed to him becoming a profession Magician, but there is one event in particular that Austin will always see as what REALLY got him into magic.

When austin was 11 years old, he and his family went on vacation to Daytona Beach, Florida, but the moment they left for the airport, Austin started to cough. This wasn't good. His mother knew all too well how often and easily he'd get sick, and sure enough, Austin spent the first Three days of the Vacation in the hotel room bed sick as a dog. It wasn't the dream vacation he had planned, but he was determined to make the best of what was left. One of the days after Austin was feeling better, he and his family took a Three hour drive and spent the day in St. Augustine, Florida, famous for it's historic and shopping districts. While walking down the shops late at night having spent the better part of the day looking at the castles of the historic district, a particular item in a peculiar shop window caught Austin's attention. It was called, "The Levitator" and it was none other than a small magic shop. Austin's face lit up, and he asked his mother if he could buy it, but by now it was too late in the evening, and they had just missed the closing of the small magic shop. Austin was sad, and his mother saw this.

A couple days later, the day's itinerary had all the men going for a golfing trip and the women going shopping. Austin didn't want to golf, he wasn't very good at it, he instead wanted to go shopping and go to the magic shop in particular. He didn't say this, but his mother knew. "But we're not going to the magic shop, Austin, that was 3 hours away. We're just checking out the shops around here and in downtown Daytona. But I'll make you a deal." his mother said. "If you go golfing, and i come across ANY magic shops, I promise I'll get you something from the shop." Austin was happy and content with that, and went off to golf with the men, and although he didn't play very well, he had a great day spent with his father, as his mother knew he would. But something she wasn't expecting was for Downtown to be as crowded as it was, finding a place to park was a nightmare! The women spent over a half hour looking for an available parking spot. When they Finally came across an empty spot to park, they were finally ready to begin shopping that day Austin's Mother got out of the car and looked up in amazement upon only now realizing that they had parked across the street from almost warehouse sized store simply called, "Daytona Magic." True to her word, Austin's mother bought him "The Levitator" as well as other tricks, unknowingly sparking a flame that would grow into something more than Austin's Profession, but his Identity.

From that point on, Austin had always done magic. It allowed Austin, who was before a shy and quiet kid, the opportunity to come out of his shell. He would show kids in school and in classes new tricks whenever he learned them, A couple of his favorite teachers would even have him perform a new trick in front of the class practically every week. In high school he joined the football team and would even show his fellow teammates and classmates tricks then, performing from the classroom to the Friday night stands. And even now, as an adult, his favorite thing to do in any social gathering, is a card trick or two.
How Austin Got Started: The Real Story
When Austin was 18, he took his Mother as a guest to a Magicians Banquet held by the Magic Masters of Chicago, and on the way they got to talking about that Vacation. "Did you ever think I'd become a magician?" He asked her. "Not in a million years" She replied, smiling.

Applicable to Stage Shows Only. Requirements are as follows:
- Professional sound system capable of playing from a set list, as well as a provided standing microphone and a hands free mic pack.
- Professional lighting including spotlights, flood lights, and house lights along with capable operators able follow to scripted choreography and follow basic scripted changes.
- Ticket Sales
- Green Room
- Unrestricted access to Venue (Stage, Backstage, and House) the week leading up to the first scheduled performance along with 2 full and scheduled rehearsals with crew.
- Janitorial services for small messes on stage including but not limited to water and confetti.

Austins Influences include many of the best names in comedy, magic, and a combination therein, including:

Stage Magic - Many Requirements, see "What to Expect"