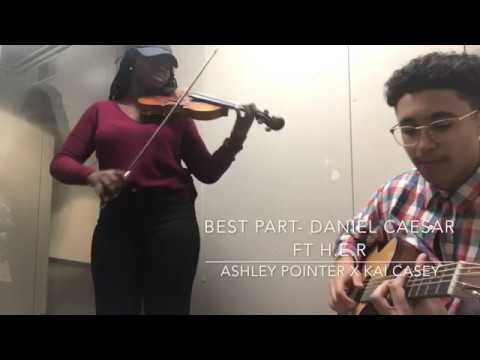 Ashley Pointer is a classically trained violinist who specializes in contemporary genres such as R&B, Soul, Pop, and Gospel. With over 14 years of playing experiences and currently pursuing a degree at Berklee College of Music, she is not to disappoint.

Be the first to review Ashley Pointer

Ashley Pointer has been playing the violin since the age of 5. She is a recent graduate from Howard High School in Macon Georgia, where she serves as Concert Mistress for the Chamber and Ensemble Orchestra’s as well as the Macon Symphony Youth Orchestra for the 2015/2016 season. Ashley participated in Clayton State College Honor Chamber Orchestra at Spivey Hall for 3 years, Berklee College of Music Global String Intensive, and she was also a finalist in the 2014-2015 Governor’s Honors program for violin. Proudly, Ashley is the first violinist ever chosen to attend Grammy Camp in New York, a summer camp program sponsored by The Grammy Foundation where the best high school musicians are selected to attend. Ashley is a current student at the prestigious Berklee College of Music in Boston Massachusetts where is his majoring in Music Performance/Music Business.

She has a passion for performing other genres such as R&B, hip hop, gospel, and pop in addition to her classical studies. She began broadening her horizons using her strong ear and improvisational skills. She often covers and arranges songs whether it be from her favorite artists or a song that just captured her attention. Via social media, she has attained the attention and praise of varies artist such as Trey Songz, 6x Grammy nominated violinist Ashanti Floyd, August Alsina, Rita Ora, Casey Veggies, Avery Wilson, Malachiae Warren, and many other artists.

In December of 2016 she received her acceptance letter to attend Berklee College of Music, and in March her acceptance letter from the University of Miami the Frost School of Music of which she was awarded a full scholarship from both schools. In May 2017 Ashley made the decision to attend her dream school, the prestigious Berklee College of Music in Boston Massachusetts in the fall of 2017.

If hired as a soloist, I would need a reliable PA system to play my accompaniments, as well as either an Amp or Direct Input, or a Mic for my violin.

I can play a few different genres including R&B, Gospel, Pop, and Soul as well as selections from the Top 40 Hits. A Few selections are: