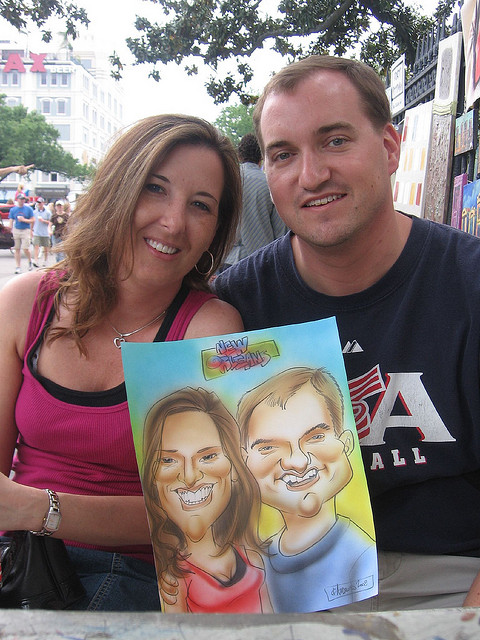 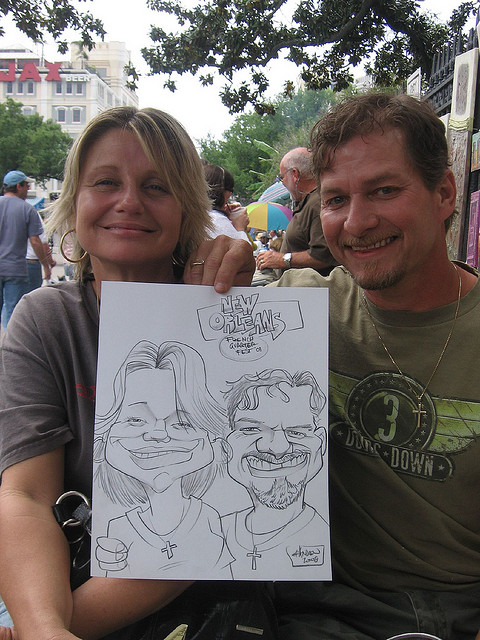 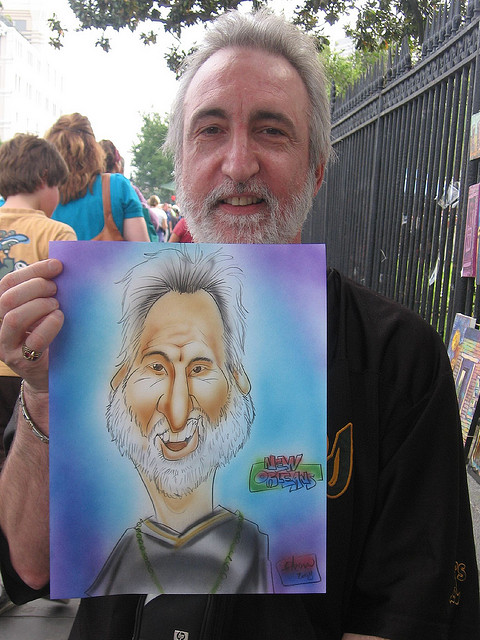 Since 1999 Andrew has been drawing whimsical cartoons for the masses. He began at Valleyfair in Minnesota, working for and studying under Tom Richmond of Mad Magazine. He later set up as a street artist in Chattanooga, Tennessee and has worked at Universal Studios in Orlando & Six Flags over New Orleans. He has been spotted at festivals and arts markets nationwide and also works private parties and corporate events. When not traveling he can usually be found on weekends at Jackson Square in New Orleans.

We received rave reviews at our event and would definitely book Andrew again in the future!

Thank you so much for the compliment. Your group was great. Fun and entertaining.

Andrew was totally on point for the event! His sketches were great, hilarious, and kept the guests talking all night. In addition, he has a wonderful sense of humor and kept guests entertained and laughing while having there sketches done.
Thank you! Would certainly book again!!

I was happy to attend. Your guests were very entertaining and everybody was friendly and great. Thanks for having me.

I hired Andrew to entertain guests during my daughter's NOLA destination/Mardi Gras themed wedding reception. I wanted to go all out on the entertainment/extras and, at my daughter's special request, wanted to find a caricature artist for the first couple of hours of the reception before the DJ showed up/during dinner & cocktails. Andrew was FABULOUS!! He is amazingly talented, personable, and was able to get everyone a drawing that wanted one in the time allotted. My guests LOVED him! His communication with me leading up to the event was stellar. He was quick to get back with me regarding details and his professionalism on site was unmatched. I planned this wedding long distance and was nervous that there would be a glitch/issue with at least one of the different vendors I hired (three of which were through GigSalad-a site I had never heard of before but will definitely be using again) but I could not have gotten a better result and I am convinced my daughter's wedding will be the talk among our guests for many years to come and that is in no small part due to Andrew's professionalism and talent. If you are considering hiring an entertainer, I highly recommend you book him NOW! You will not be disappointed. Thank you so much, Andrew. You were so great to work with!

Hired as:
Caricaturist
Write a Review

I am a professional artist and entertainer with with nearly 15 years of experience drawing at special events. I'm friendly, outgoing, entertaining and very professional. I've worked for every sort of event and clientele you can imagine. I work fast and can draw about 12 caricatures an hour. I also do live painting to capture special moments at weddings and receptions.