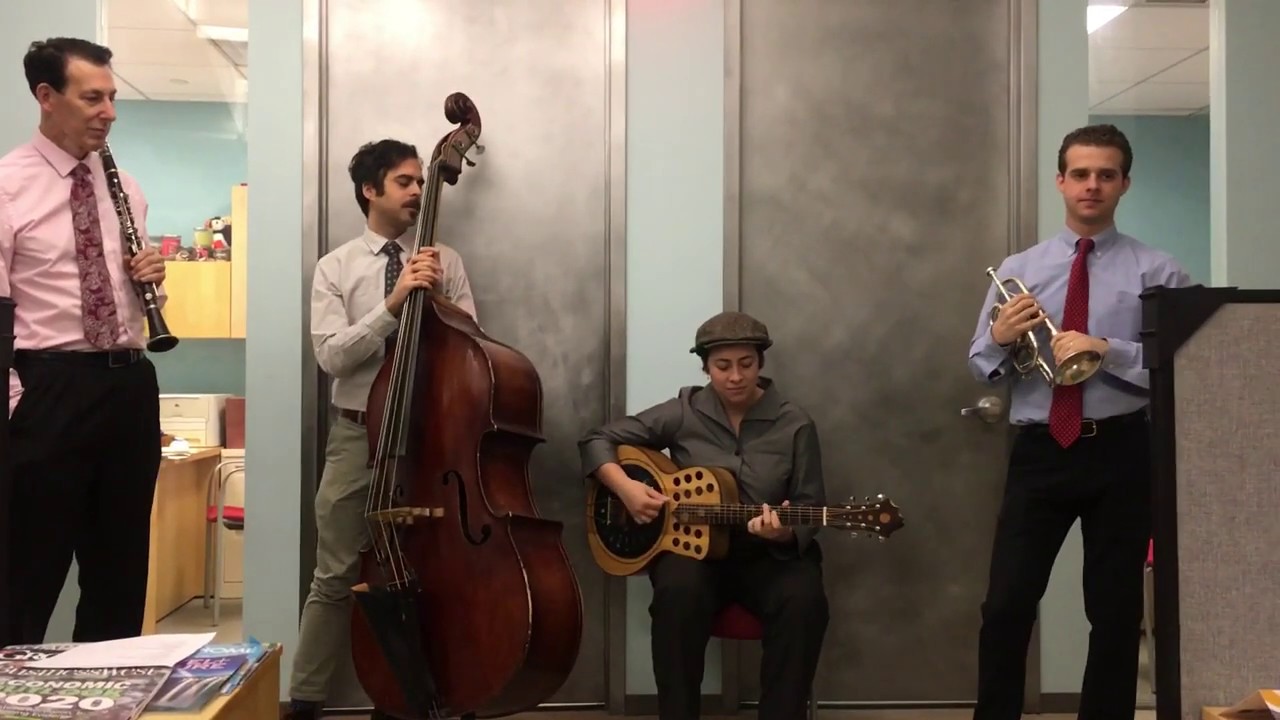 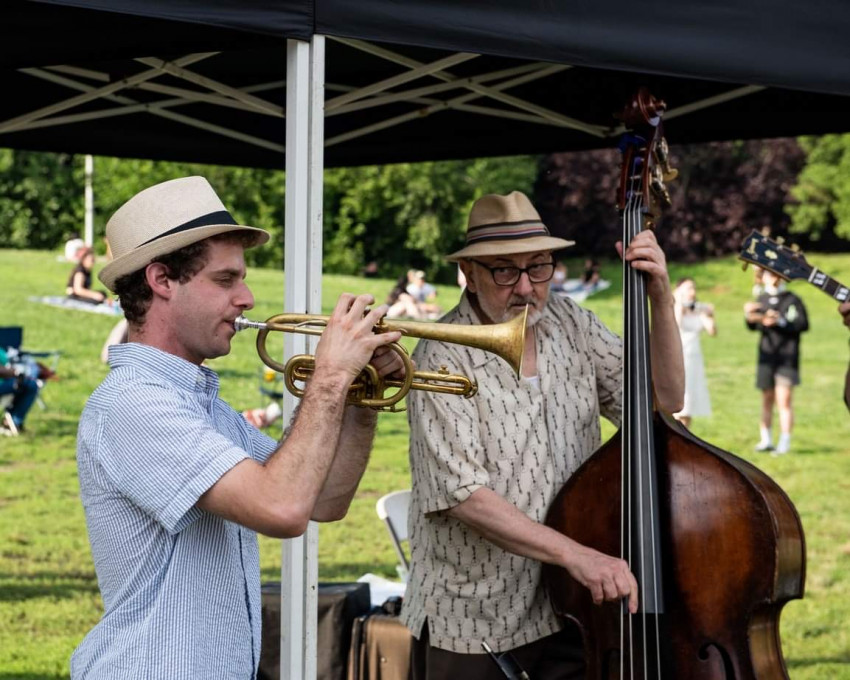 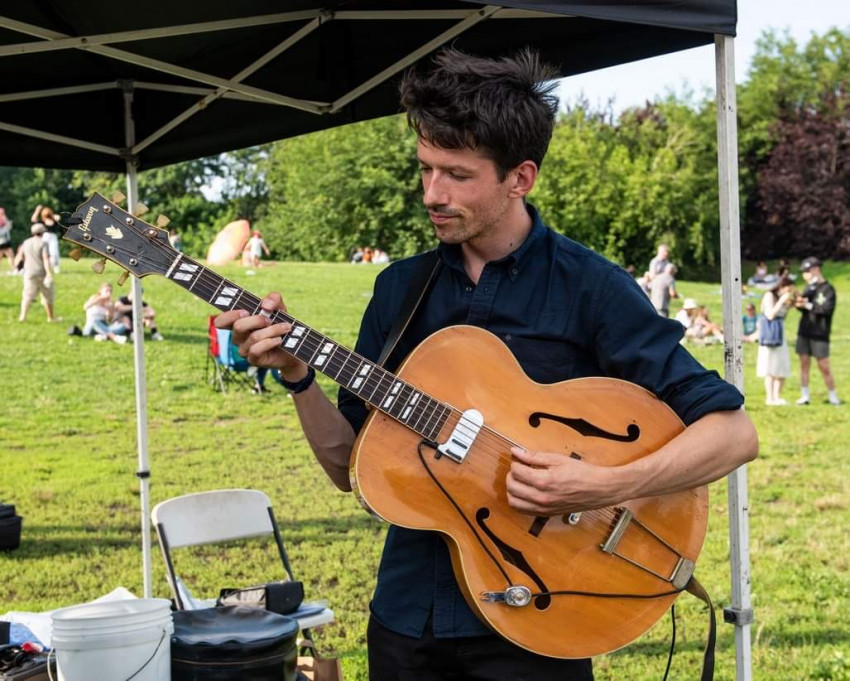 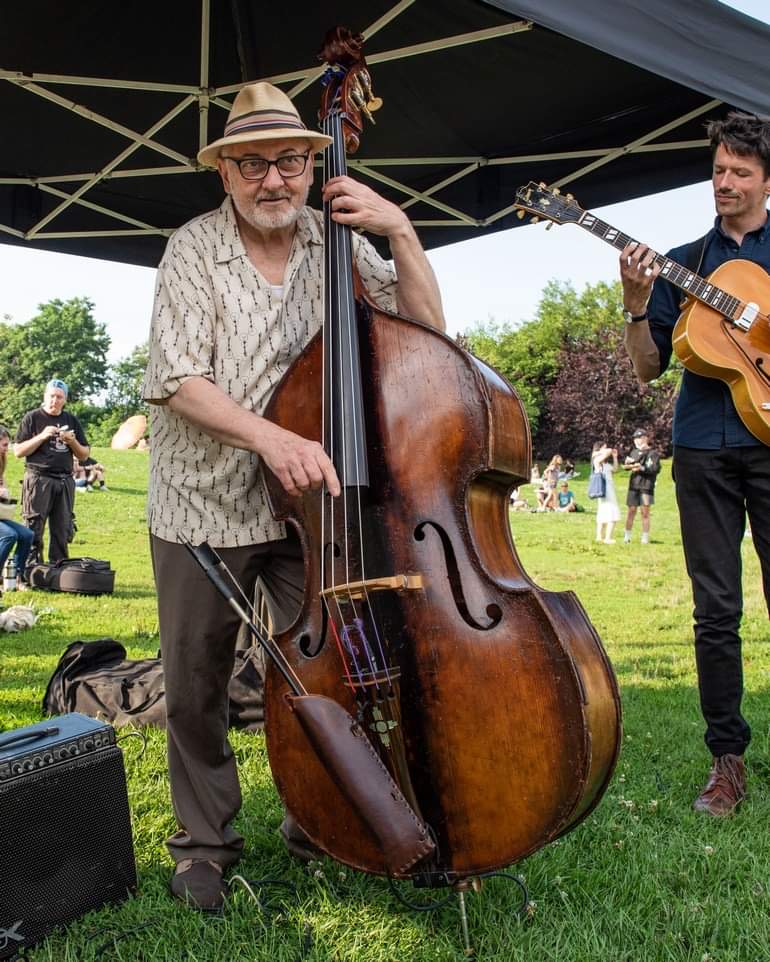 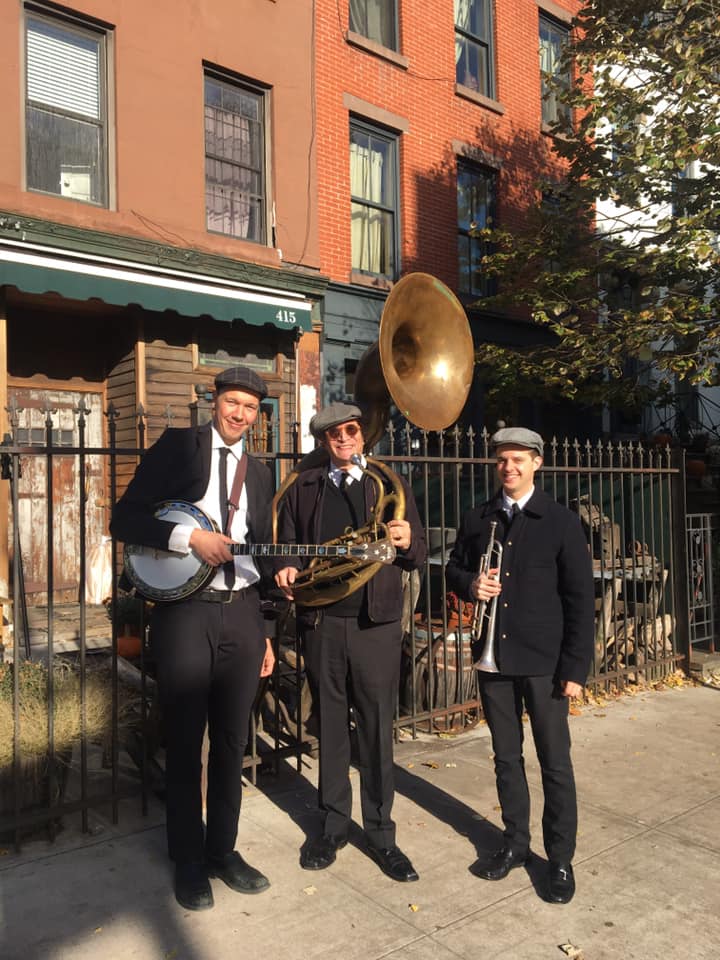 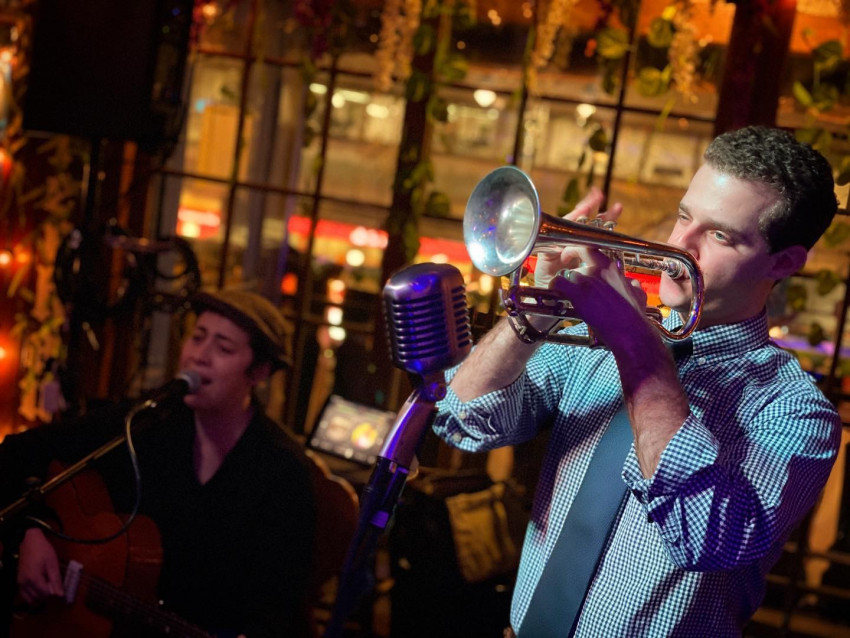 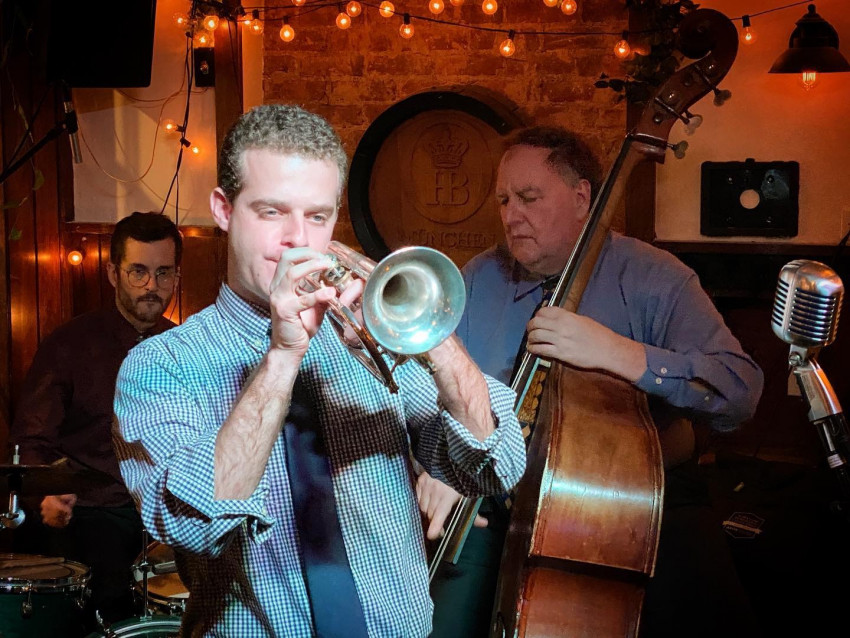 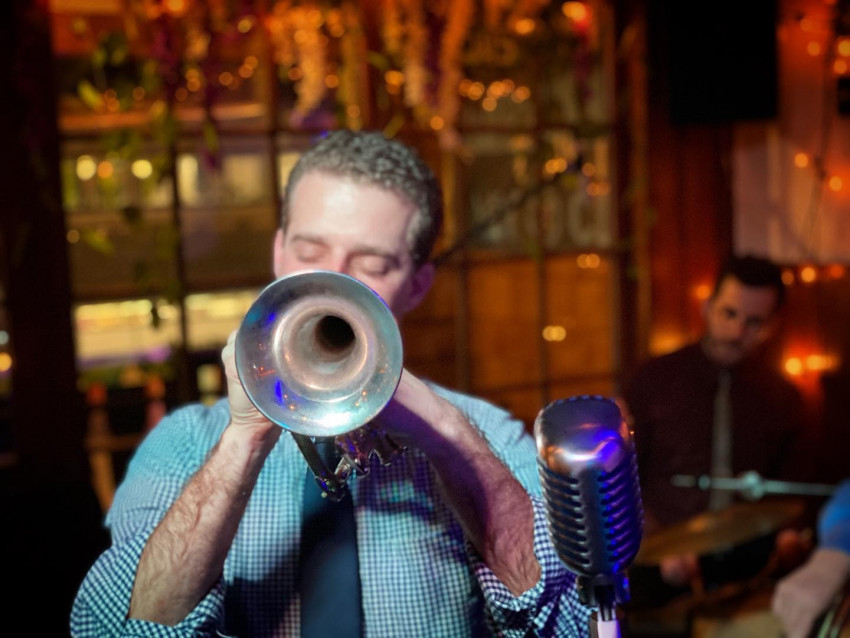 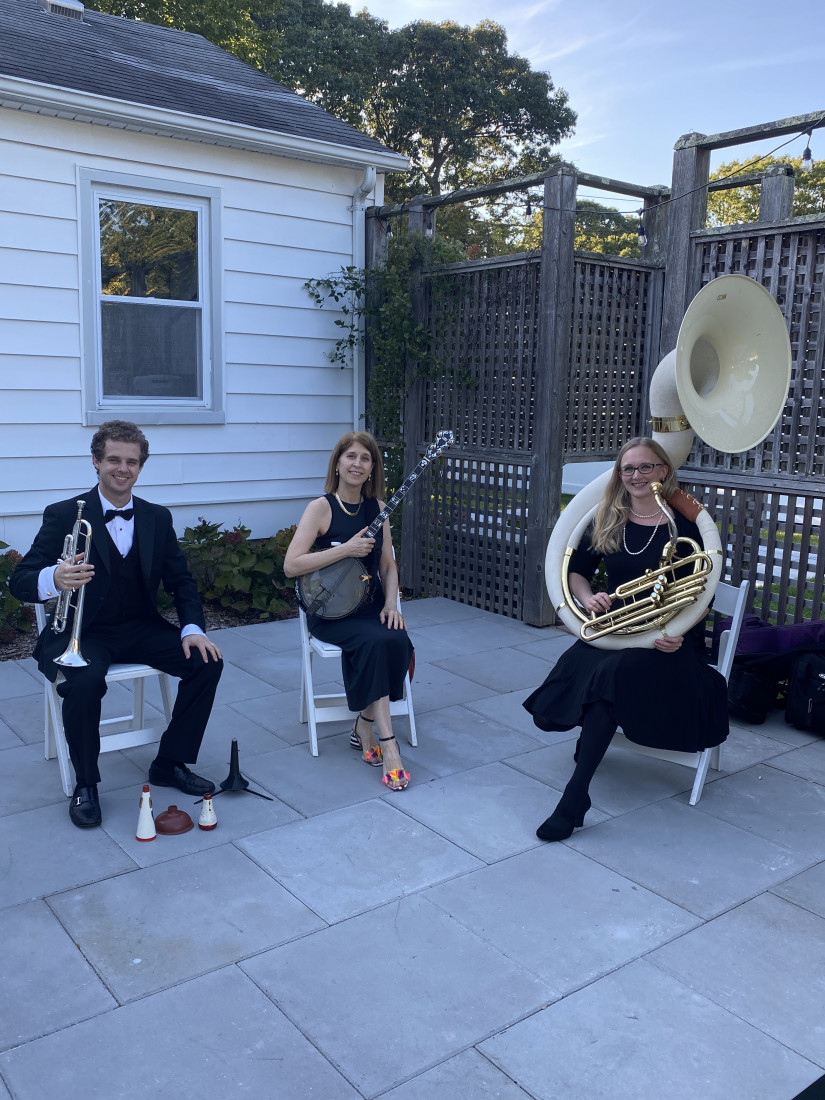 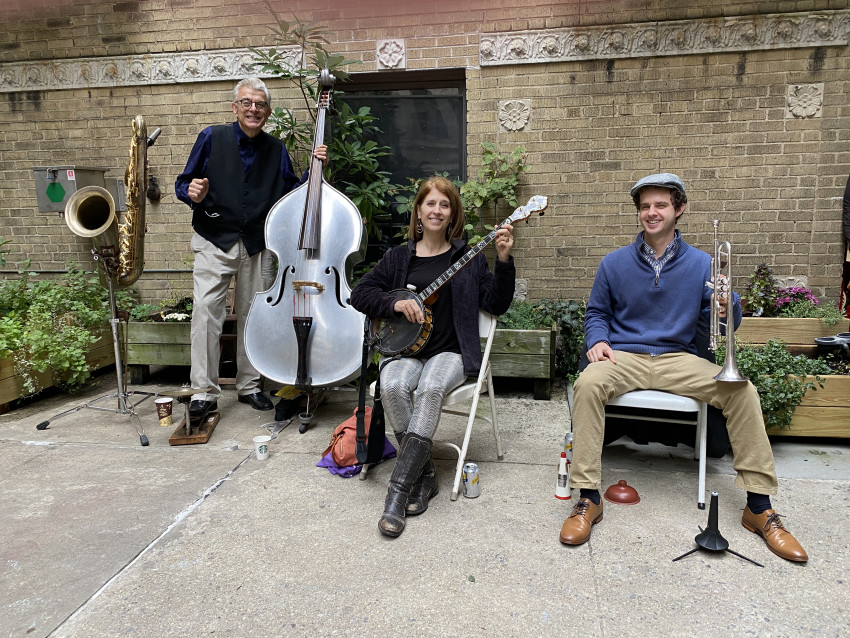 Playing for a party for a building's residents.

We provide New Orleans style jazz and swing for all types of events. We can put anything together from a small duo or trio to a full 7-piece band! We can also put together Brass Bands.

Alex and his band were perfect. I was nervous about what to expect when booking an act through Gig Salad, but I could not have asked for a better experience at our event. Alex communicated very well prior to the event and was very professional in all his interactions with me. I never worried for a second. But the music was the real surprise. They were so good! Each person in the trio was exceptionally talented, and they worked together so well. They played for quite a while at our event, and it never faltered for a second. The music was top notch, just what I could have hoped for, and was loved by all the guests. If anyone asks, I would recommend Alex and his band in a heartbeat, and I am definitely going to have them back at future events.

Thank you for the kind words Jason! We had a great time at your event and I hope we get to come back and play for you again sometime soon.

Absolutely top notch act - highly recommend them, they raised the bar of our party and we’re such a hit. Very nice people to work with too!

Thank you Laura! We had a wonderful time playing for you.

Thanks Lorelei! We enjoyed playing for you.

We provide an authentic New Orleans and vintage jazz experience! The musicians that I hire are experienced members of the New York traditional and New Orleans style jazz community. We arrive early to every performance, and we work as diligently as possible to be flexible in order to provide our clients with a wonderful musical experience.

Born and raised in New York City, Alex studied trumpet from a young age. After graduating from Connecticut College, where he was introduced to New Orleans-style jazz, Alex moved to New Orleans, where he played professionally for 7 years. While there, Alex founded the Messy Cookers Jazz Band. The group played frequently around the city, including Three Muses, Bamboulas, The Saint Hotel, the Renaissance New Orleans Pere Marquette Hotel, the Renaissance New Orleans Arts Hotel, the Maison Dupuy Hotel, and many private events. Recently, the group performed at the New Orleans Jazz & Heritage Festival in the Economy Hall tent and released their most recent CD, “Get Out and Get Under the Moon,” in April of 2019.

As an educator, Alex has taught students of all ages. He was a band director with the Archdiocesan band program of New Orleans for 3 years—teaching, recruiting, and directing elementary school bands in the New Orleans metro area. He has also been invited as a guest teaching artist to the Straight 8 Master Jazz Camp in Garland, TX in 2017 and 2019. Alex moved to New York in August of 2019 to pursue a Master's of Music and Music Education at Teacher's College, Columbia University, with an expected graduation date in May of 2021.

Now back in New York, Alex puts put together all sorts of bands for any occasion, from jazz duos and trios for smaller, more intimate functions to full 6 piece New Orleans style jazz bands. Alex also has experience putting together Brass Bands for second lines from his time in New Orleans, and he can put together any size Brass Band for any occasion, from a trio to a 10-piece band!

- Dinah
- It had to be you
- At the Jazz Band Ball
- I can’t give you anything but love
- Some of these days
- Someday You’ll be Sorry
- Lady be good
- Oh Baby
- On the sunny side of the street
- The Sheik of Araby
- Jada
- Indiana
- I’m Crazy ‘bout my baby
- Everybody loves my baby
- How come you do me like you
- My Blue Heaven
- Shimmy like my sister Kate
- Lady be good
- Someday Sweetheart
- Margie
- Sleepty time down south
- Lulu’s back in town
- I’m gonna sit right down and write myself a letter
- Shine
- Somebody stole my gal
- Exactly like you
- Yes sir that’s my baby
- I’m Confessin’
- Home-Eb-vocal
- Royal Garden Blues
- Hello Dolly
- What a wonderful world
- Bourbon St. Parade
- That’s a plenty
- Riverboat shuffle
- That Da-Da Strain
- Ain’t She sweet
- Way down yonder in new Orleans
- Lil liza jane
- Ain’t misbehavin'
- All of me
- Do you know what it means
- What a wonderful World
- I’m walkin
- Blueberry Hill
- Wrap your troubles in dreams
- After you’ve gone
- Bei Mir Bistu Shein
- Blues my naughty sweety gives to me
- It don’t mean a thing
- Satin Doll
- A Kiss to Build a Dream On
- New Orleans
- L-O-V-E
- I’m gonna sit right down and write myself a letter
- Girl of my Dreams
- Hestiation Blues
- Milenburg Joys
- Tishimingo Blues
- Yellow Dog Blues
- High Society
- Fidgety Feet
- Original Dixieland One step
- Tiger Rag
- Deed I do
- Old Fashioned Love
- Carless Love
- When I grow too old to dream
- Is it true what they say about Dixie
- Ballin’ the Jack
- Them There Eyes
- These foolish things
- Memories of you
- Fly me to the moon
- Body and Soul
- It’s only a paper moon
- Don’t get around much anymore
- Beale St. Blues
- Cheek to cheek
- Diga Diga doo
- Louisiana Fairytale
- That’s my home
- Mississippi Mud
- I've got a right to sing the blues
- Panama
- Clarinet Marmalade
- Louisian-i-a
- Louisiana
- My Buddy