Booking a Grand Prairie 1950s Era Entertainer through GigSalad offers you extra protection you can’t get anywhere else. You can rest easy knowing that your payment is secure, and that we’ll have your back in the event of any trouble that may occur. Learn more

You need Johnny Diamond & the Silver Hubcap Band. They specialize in the "Oldies" and “50’s & 60’s Rock and Roll”, but can play a variety of other…

Jorge C. C. said “He did an excellent job. Extremely professional and respectful of us and the people around us since this was in a public location. His performance was…”

Dan G. said “Justin Pierce and his team was an awesome addition to our wedding. Numerous guests commented their musical experience. Justin and team are collaborative,…”

Lanequia said “He was everything! My guest were pleased and so was I. We will be hiring him for our next event. He had a great selection of music he was very professional.”

Angie M. said “Hunter did an amazing job. Highly recommend this young man if you are looking for a young Elvis!” 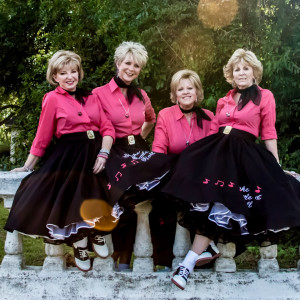 Bonnie M. said “We winter in San Benito, TX at Fun n Sun RV resort. These lovely talented gals performed for our Valentines dinner. My favorite show of the season. They…”

Carol F. said “Tavie's Rock & Roll Show entertained a group of 60+ ladies at our Scots Wood Garden Club Christmas luncheon, and I must say she made me look good…”

Emily R. said “Mike was the hit of our event. Good communication prior and very thoughtful coordinating plans.”

In the past year, 1950s Era Entertainers have sent 547 quotes to event planners

You are viewing
1950s Era Entertainment in Grand Prairie, TX

Some things to consider when hiring 1950s entertainment are to make sure you listen to audio and watch video clips of the performer/group. This will ensure that you truly do book the best for your next event! Next, you want to get references. Talk to people in the area about the performer and get feedback. Finally, get a contract. Many professional performers require a deposit to secure them at your next event. Make sure to read through the contract carefully before contracting their services for your party. Search for 1950s Era Entertainment in Grand Prairie, Texas above.