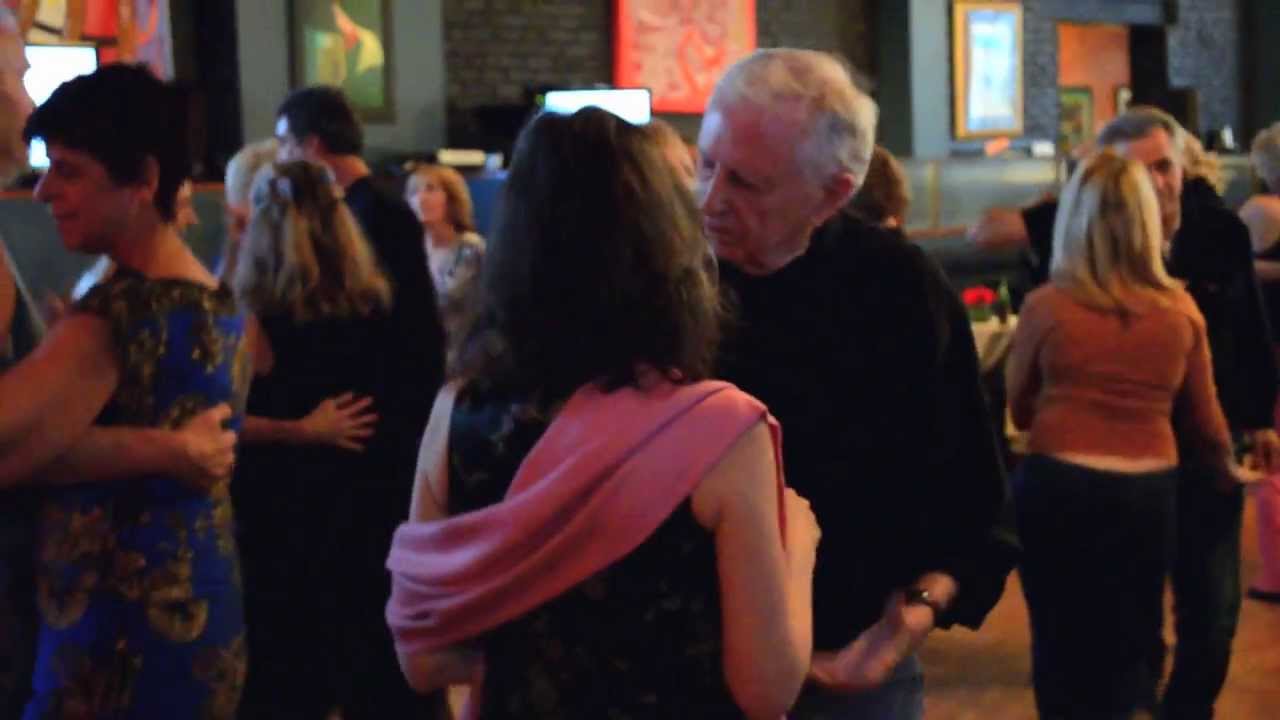 Put A Hump In Your Back 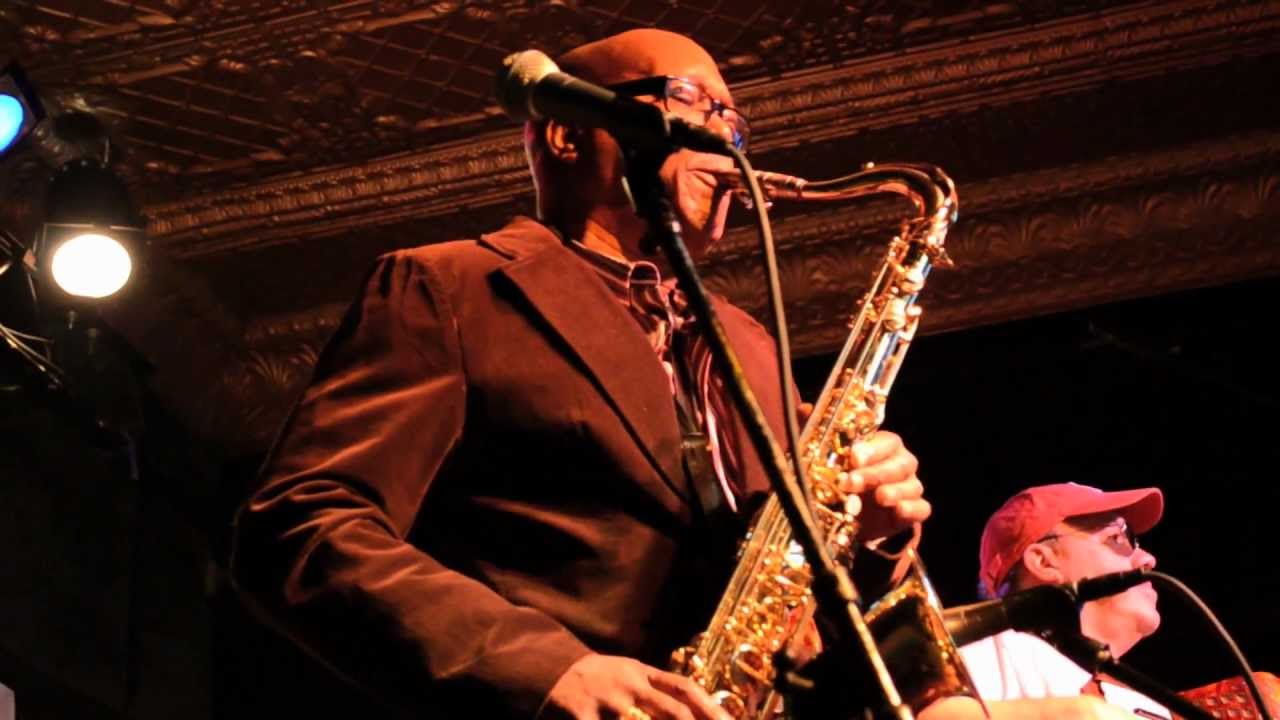 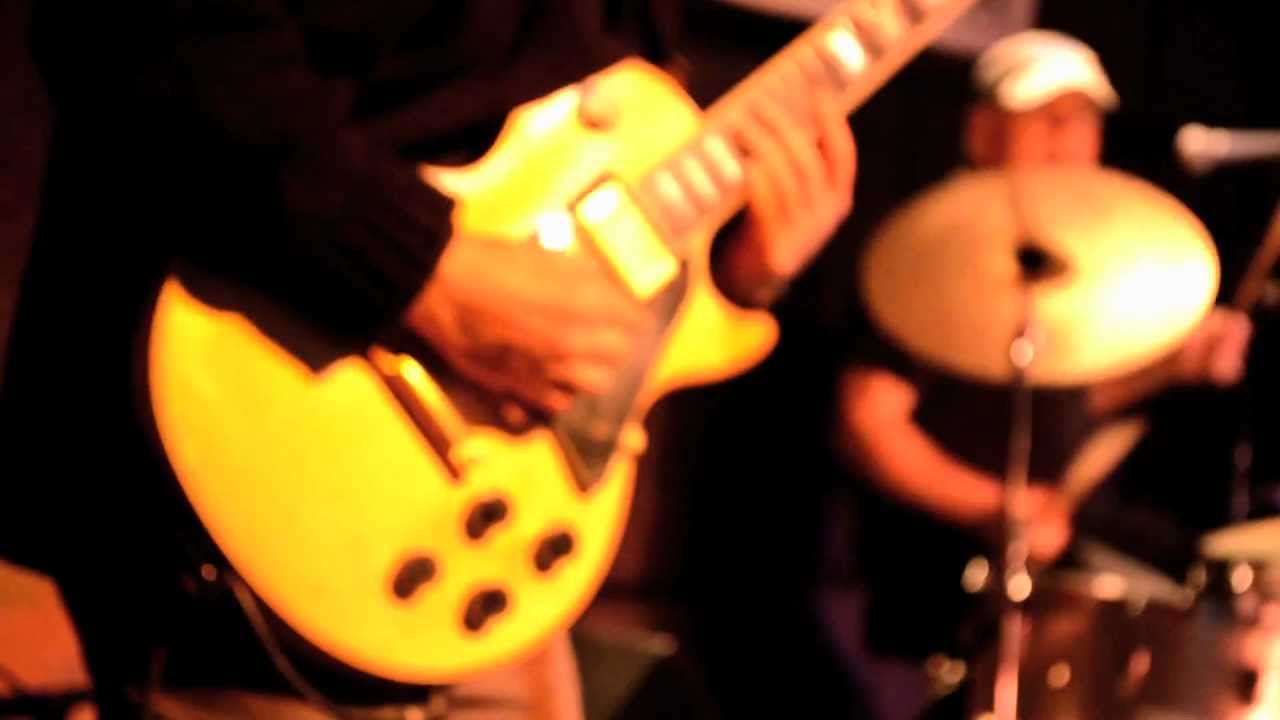 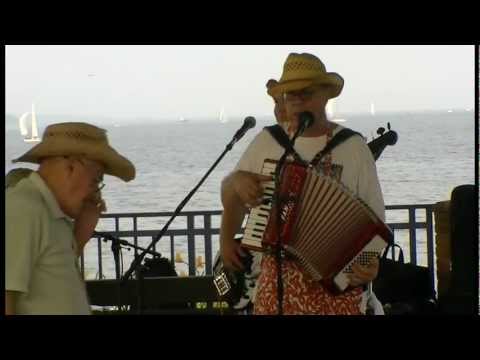 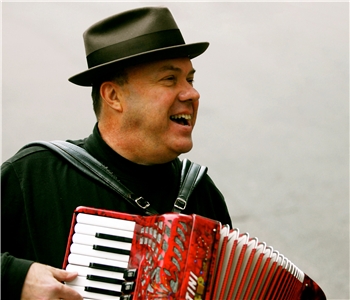 Pete Gumbo on the "Squeeze-Box" 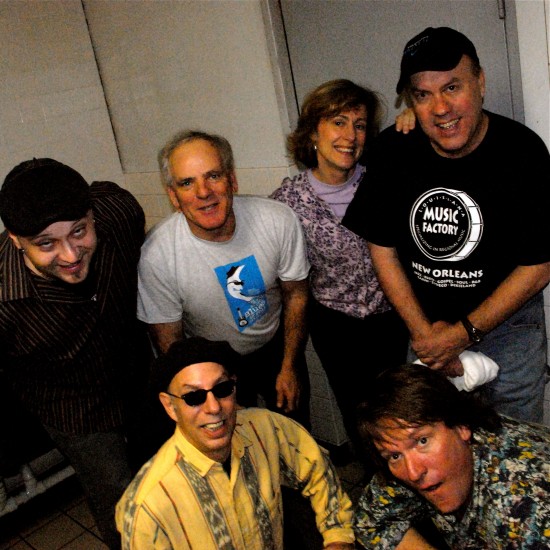 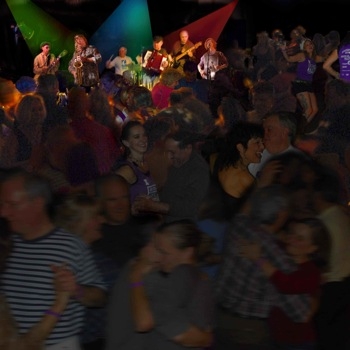 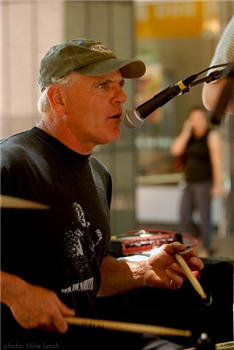 Bob Holden on drums and singing about "Marina" 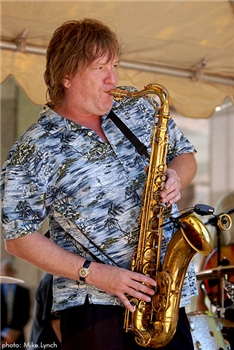 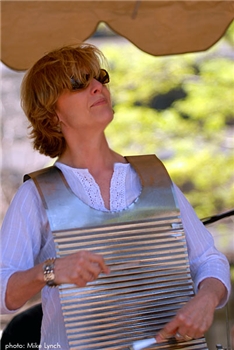 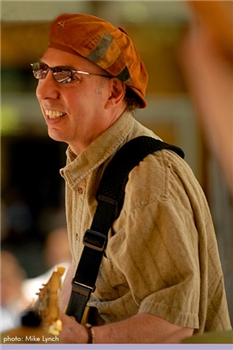 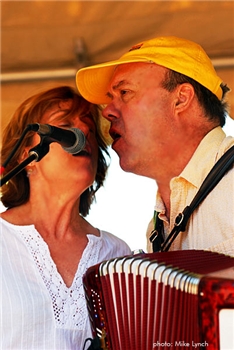 Pete and Pam sing one together 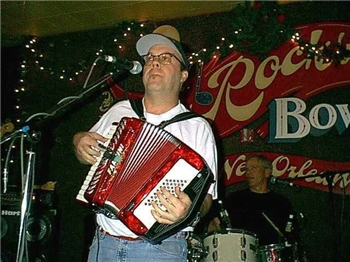 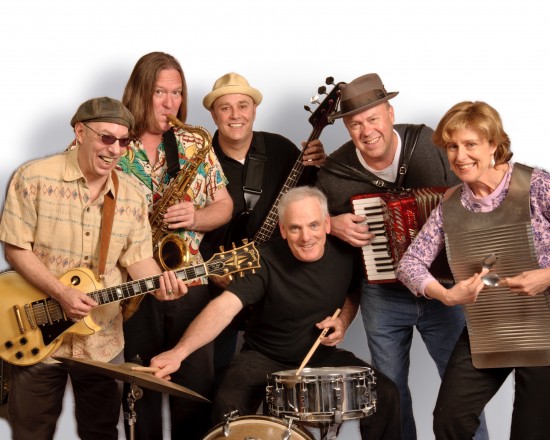 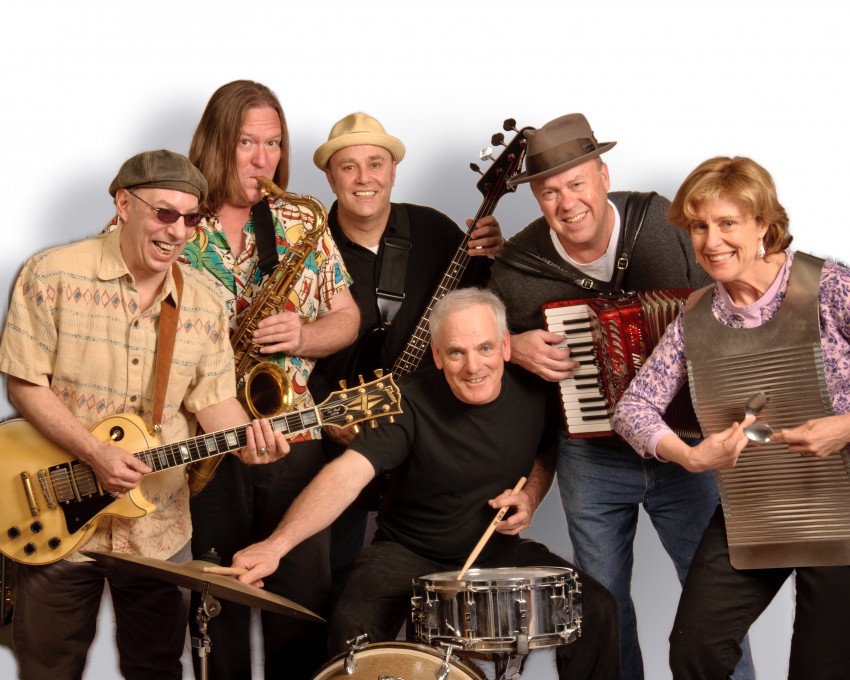 Let's party like they do down in New Orleans! "Laissez Les Bon Temps Roulers!" or "Let The Good Times Roll!" with Zydeco-a-Go-Go, the Mid-Atlantic's #1 Zydeco Band. Creole Zydeco and Cajun 2-steps combine with funky New Orleans rhythm & blues and vintage Louisiana Rock & Roll into a spicy gumbo of irresistible dance music---and whether they're playing a smalltown fair or a big regional festival, a performing arts center or a college dance concert, a church carnival or a swanky fundraiser gala, a backyard BBQ or one of those non-stop everybody's-up-and-dancin' wedding receptions, you know it's gonna be a wild & swingin' pitch-a-wang-dang-doodle-all-night-long ZYDECO DANCE PARTY!

Great with the crowd

Keep the crowd entertained and involved with the event.

I hired Pete to perform for my 1st anniversary in Philadelphia. I wanted to have an accordion behind my date and I where we had our first kiss by the river. Pete was very accomodating from the beginning and even walked a half mile from where he parked to the location. He was an excellent performer and a great idea-generator. He played la vie en rose and besame mucho to perfection. 5 stars. Would recommend to anyone looking for a cool way to end a date night.

The event was amazing, the guys were great, very friendly, and very professional. Everyone present thoroughly enjoyed the music and the experience. Would definitely hire again!

And whether they're playing a large festival or a smalltown fair, a performing arts center or a block party, a bowling alley or a swanky fundraiser gala, a back-yard BBQ or one of those non-stop everybody’s-up-and-dancin’ wedding receptions: you know it's gonna be a wild and swingin' bayou boogaloo pitch-a-wang-dang-doodle-all-night-long zydeco dance party!

At the heart of any Zydeco-A-Go-Go song is the classic zydeco sound of accordion and frattoir (rubboard) augmented by saxophone, electric guitar, electric bass and drums. Their performances feature lyrics sung in English, Spanish, Cajun and Creole French, set to a beat that keeps people dancing all night long.

Although based in Philadelphia, the group has garnered praise for its authentic Louisiana sound. When playing a gig at the legendary Rock & Bowl in New Orleans, they kept the crowded dance-floor busy, with lots of smiling faces everywhere. KBON, a popular radio station in Eunice, Louisiana (the heart of Cajun/Creole country) put the group's debut CD into its daily rotation. Music from that cd was used in the soundtrack for ABC News “Earth Day 2000” that was broadcast worldwide during a segment documenting the effect of global warming in Louisiana. Their latest CD "Let The Good Times Roll" has received rave reviews and is being played on radio stations across the US and in Europe.

Founded in 1992, the all-star group boasts colorful personnel with decades of experience: bandleader Pete Gumbo, on accordion, piano, and vocals, was a founding member of underground cult legends PHILLY GUMBO, backed Jamaican toaster BIG YOUTH, Nigerian Afro-Pop recording sensations THE LIJADU SISTERS, and has played piano with such artists as SLEEPY LaBEEF, BO DIDDLEY, and New Orleans’ own CHARLES “HONEYBOY” OTIS. Guitarist Billy Baltera studied music at Boston’s Berklee School Of Music. He’s gone on to become a seasoned pro, having recorded and toured the USA and overseas for many years with Texas blues icon SONNY RHODES, soul shouter FRANKIE LEE, and Delta bluesman LONNIE SHIELDS.
Saxophonist Bobby Michaels is one of Philadelphia's most in-demand musicians, also plays with The Soul Survivors, Bill Haley's Comets and The Stylistics, just to name a few.
Drummer Bob Holden, a founding member of THE DUKES, has backed local rock heroes like ROBERT HAZARD and QUINCY as well as national recording artists such as soul-singer TERRY EVANS and roots-blues legend OTIS RUSH. Bob got his start in music as a teenager drumming behind James Brown impersonator LEON & THE WORKOUTS.
On bass guitar is Jimmy Pritchard, a skillful and intuitive player who has toured and recorded with many well-known blues artists, including SONNY RHODES, BIG JACK JOHNSON and MIKEY JUNIOR.
Rounding out the group nicely is special-guest on-request Pamela Eshelman on rubboard and vocals.... she brings to the band a sweet & soulful voice, a swinging sense of rhythm and contagious onstage enthusiasm.

Zydeco-a-Go-Go was absolutely fantastic. They made our wedding day. They are worth every penny as they created a fun and lively atmosphere. At several points in the night they had ALL 200 guests on the dance floor - no easy feat. I have recommended and will continue to recommend them to every bride and groom. For a guaranteed good time, and a band that is in a different league from your average wedding music, you can't go wrong with Zydeco-a-Go-Go. You and your guests will love them!

“...Our audiences loved the program, and literally were dancing in the aisles by the end of your first rousing set. And that in itself was quite a feat for our normally more subdued subscribers! As this was also our ‘Audience Survey’ time, I can share this enthusiastic response from one of our patrons with you: “This concert was really wonderful. Let’s get Zydeco-A-Go-Go back again!”

“...My grandmother, who has been dancing for most of her 85 years, said she hadn’t heard a band like yours since the 20’s -- you impressed us all!”

“...We couldn’t have chosen a better band to play the reception, it was a real treat to see all of our guests up and dancing (even our grandparents)...”

“ a fairly beefy sound....accordion playing that recalls zydeco’s old-school...Besides staples such as Boozoo’s “Motordude Special” and Leo Thomas’ “Why You Wanna Make Me Cry,” there’s a rollicking rendition of Major Handy’s “Down On The Bayou.”
Saxophonist Troy Corley let’s it scream on “What’d I Say,” Ivory Joe Hunter’s “Since I Met You Baby” seduces, and overall, the playing is top-notch throughout...”

“...if you didn’t read the brief liner notes on the inside cover of this CD you would think that Zydeco-A-Go-Go were native sons of the state of Louisiana and not a damn good zydeco band from Philadelphia, Pennsylvania...”

“...done with craft and danceable vitality...sound overall is tight and rhythmic...”
“...upbeat dance tune appeal...sure to get everyone out on the floor...”
“Peter Eshelman’s down home vocals give the songs an amazing appeal, along with his marvelous accordion work...the entire package is very entertaining...”

“...Just wanted to let you know, I’ve got your CD and we’re adding some of your music to our regular playlist, on rotation...it’s good stuff, I’m really, really very proud of it, good work!”