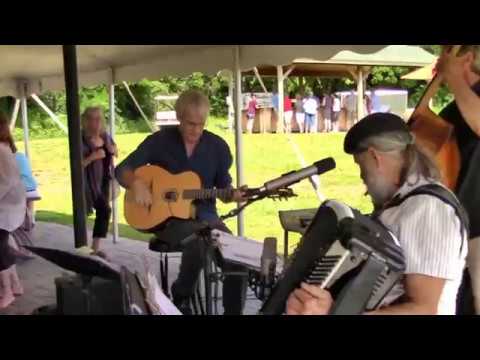 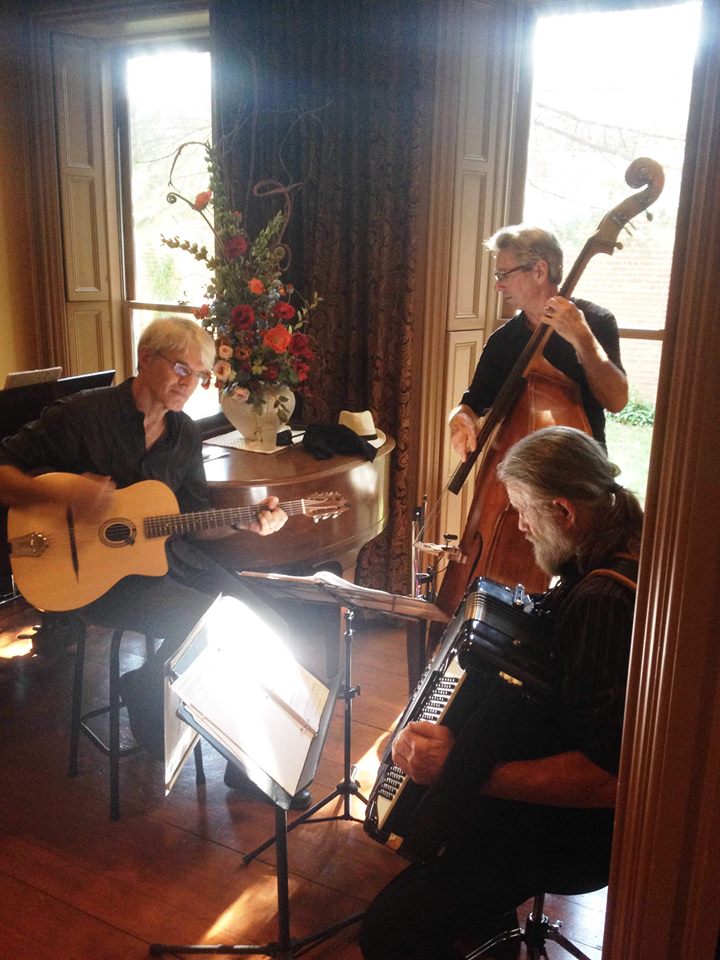 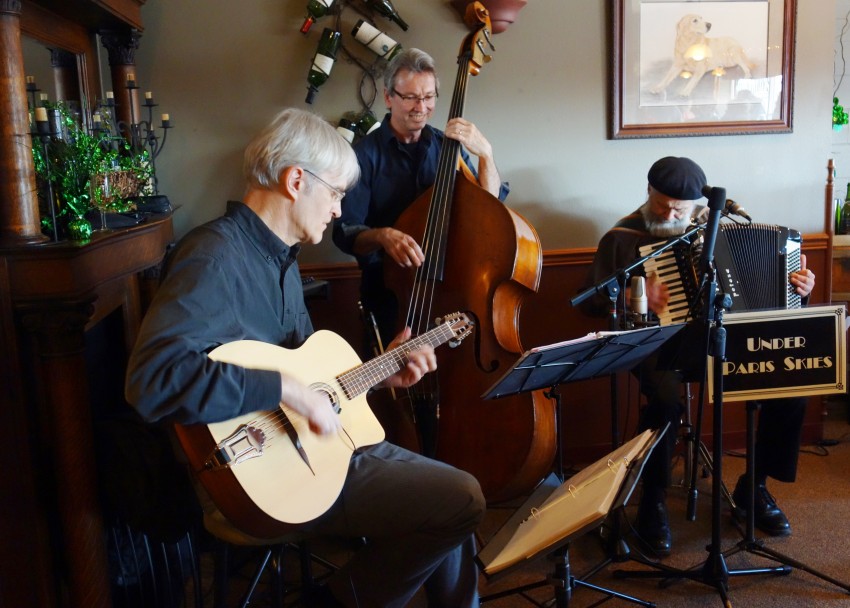 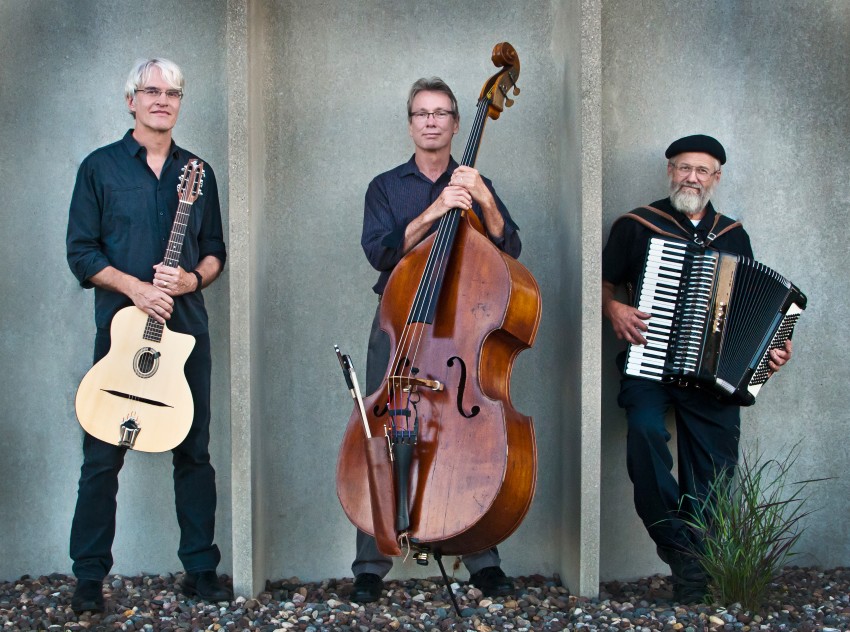 Perfect for relaxing listening during a wedding reception.

Thanks so much for having us play and for the kind words!
Best wishes
-Under Paris Skies

As always this band was super. Plays the type of music that you can still hold a conversation and be heard. Very friendly gentlemen, did whatever we had requested. Will have them again.

Thanks, we very much enjoyed being a part of the event and we'd be delighted to be invited to play again!

You guys were a big hit here at Eagle Crest in Onalaska WI.!! The residents had such a great time and want you guys to come back and play for us again. Thanks for enriching our residents and staff!!

Thank you so much. We enjoyed playing and we'd love to come back!!

I was looking for an acoustic band to play during an annual meeting/awards ceremony. Under Paris Skies was highly recommended and did not disappoint. I heard nothing but compliments regarding the music, and some asked for more information for their events as well.

Thanks for the kind words! We love to play for these kind of events.
- Under Paris Skies

Expect romantic charm with swing! Here's what our fans tell us-

“Under Paris Skies was awesome!… thanks so much.”

"It was great having you on our special day."

“Thank you so much for playing… you were fantastic!”

“Many guests let us know how much they enjoyed your music.”

“You added a feeling of nostalgia and love to the day and fit the venue like a glove! Everyone is still talking about it!”

"There aren't a lot of bands in the region offering anything like what Under Paris Skies serves up, and once you taste a serving you'll be hooked."

Since 2014 UNDER PARIS SKIES has been perfecting their unique style of gypsy jazz, French waltzes, Argentine tangos, boleros and bossas.

_________________
1930s. Paris, France. A Belgian born Gypsy guitarist, Django and young violinist Stephane Grappelli meet and quickly discover they both share an interest in American jazz. Soon after, they formed the Hot Club of France, a quintet that invented a musical genre that became wildly popular. It was rediscovered around the turn of the millennium and is today known as gypsy jazz according to guitarist Steven Meger. Jazz was born in this country, he says, found its way to Europe via early phonograph records, and made its way back ... changed.

Meger was drawn to the genre because he found it challenging but extremely satisfying to play. "I felt like it was something I could enjoy playing for the rest of my life," he admits. For a few years he played in the La Crosse Hot Club, but the other members of the band were UW-L music students who eventually moved away. However, he knew upright bassist Larry Dalton, a ubiquitous local musician, and Dalton was interested in forming a band. Dalton in turn knew Ron Reimer, a lifelong accordionist.
"We were thinking we needed a third player," says Meger. "But accordion did not come up first in the discussion. At one point, Larry suggested that we send an email to Ron. We weren't even sure if he was familiar with the genre."

They contacted Reimer, not knowing what to expect, to ask if there was an interest in a project that involved gypsy jazz and other music. The answer came in an email that said, “More than just a project ... it should be a musical revolution!"

The three of them became known as Under Paris Skies, choosing the non-French name because it was easy to pronounce and gave an impression of what they do musically. Under Paris Skies, it should be noted, is the title of a well-known French musette, a type of tune that is played in waltz time. It was the first tune that Meger and Reimer ever played together. Reimer's accordion-playing history includes classical, old-time and folk dance music, big band and more, but he realizes that in some music there isn't always a place for the instrument. Still, throughout his career he has experimented in pushing the boundaries. "I can relate to Django Reinhardt hearing those American jazz records and realizing that there weren’t guitars in those bands and, you know, having to reinvent jazz so that the guitar worked in it,” he says. “So I ask myself how I can make my skills adaptable to other kinds of music. I'm trying to find some way I can relate to younger people or others who might find this instrument unusual." Indeed, it wouldn't be uncommon to find him working out a Rolling Stones tune.
Dalton, who has a long and diverse history in many local bands, says he was drawn to the genre of gypsy jazz because he likes the voices of the instruments. "I like the style of the music'" he says, "and I like the flexibility it offers me as a bass player, to be able to play arco, with the bow. In this band, especially since there are only three of us, it gives another solo voice."

The instrumental voicings of Under Paris Skies do complement each other gorgeously. The accordion can be delicate or provide a big, complex sound, while the guitar sits in a perfect range to offer percussive rhythms or dynamic solos. Finally, the big, rich bass provides the bottom of the sound spectrum. Put together, the music merges three distinctive layers of texture without a lot of competition.

Meger explains, "We don't have percussion, but between all three of us, we cover that. Larry will sometimes play a slap technique when I'm soloing, and Ron will catch the back beats. I think we've developed a style in which we can swing without a drummer."
The band doesn’t have tunnel vision, however. "It isn't strictly Parisian music or French musette or gypsy jazz; it's anything else we think is good music," confesses Meger. They offer Euro swing, Brazilian and Portuguese tunes, tangos and a variety of other fare, including some Beatles songs, which they cover beautifully and uniquely.

Reimer adds, "It's a revolution. It's everything that nobody else is doing." That's for sure. There aren't a lot of bands in the region offering anything like what Under Paris Skies serves up, and once you taste a serving you'll be hooked.

-CR
Clay Riness is a freelance writer and photographer from Coon Valley and is a longtime devotee of Django Reinhardt and the Hot Club of France.

Floor space for 3 musicians with instruments