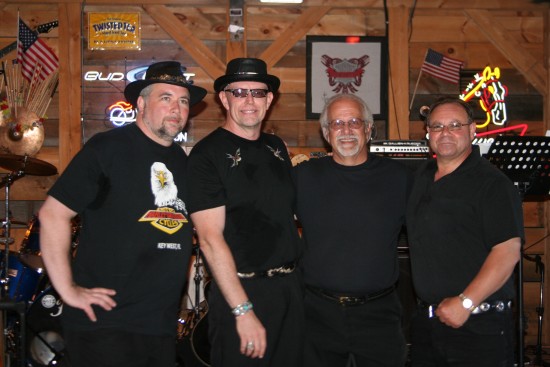 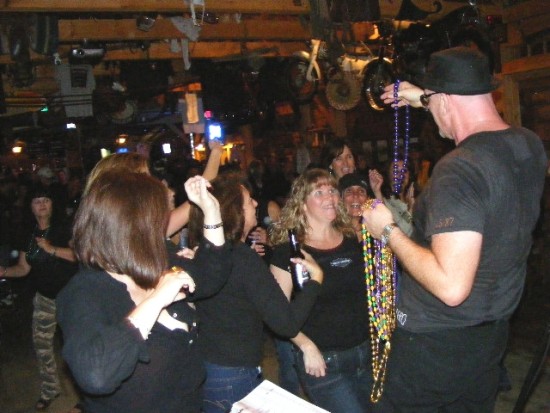 Al passing out the beads!!

TWEED BROTHERS BAND is a rock band with a cool, southern feel, catchy songs and a killer live show!.....was formed in 1995 has successfully landed over 600 shows booked and managed by themselves! The band plays a wide variety of music from Aerosmith , ZZ Top, Led Zeppelin and Lynyrd Skynyrd. We play a lot of great dance songs.

I hired the Tweed Brothers Band for a private party. The party was for 80 to 90 people and was outdoors. The whole experience from beginning to end was professional. The band plays a wide variety of rock and blues . The music included music from the sixties to music on the air now. All four members are excellent musicians who play very well together. Their music was enjoyed by all and we are planning on watching them play again. I have no negative comments. I would have no hesitation recommending the Tweed Brothers Band. Thank you.

Our approach to performing is simple: the total integration of musical sound. We strive for the true essence of sound in order to reproduce the vintage tonal quality that has been lost in today’s musical world of hype and technology. We mix our sets going from classic rock into blues, blues rock and back without stopping to keep the party going. The spontaneous improvisation has become a cornerstone of what our music is all about. The songs are real and over the course of a night there is always a moment where the band blows its collective head off creating something magical beyond pure energy. If you like to dance or rock, we've got you covered. The Tweed Brothers truly care about what you think and will work with customers to create the event you require and place a high priority on customer satisfaction. Whatever your musical tastes may be, you are sure to hear something you like.

Al Carrier
Harmonica, Guitar, Vocals
Al is a seasoned front person who has talented vocals along with soulful harmonica, guitar and slide guitar playing. As the leader of the Tweed Brothers, Al believes the band is “therapy” of the greatest kind. He has been listening to blues music since 1968 when he first heard Muddy Waters’ recording of “MOJO WORKIN’” on his grandparents’ Arkansas farm and also loves classic rock. In addition to playing, Al books the band, hauls the trailer, and comes up with new material for the band to learn. Al’s love for music comes out in every song he performs. He is creative, articulate, and provides a solid front for the band. When it comes to equipment Al admits, “For many happy years I only owned 2 harp amps, a Bassman for bigger rooms and a 1957 Fender Champ for smaller rooms, until eBay came along and maxed out my credit cards. That’s alright though. It’s better to be equipment rich than tone poor”. With Fender and Gibson guitars played through top notch amplification, he doesn’t have to worry about getting just the right sound anymore.

Larry Stolz
Lead Guitar
Like a freight train rolling through the night, Larry plows through his music with relentless power and a full head of steam. He’s from a hard core New York City where he discovered Jimi Hendrix and Cream. By following these artists, he learned of their influences and became a fan of Muddy Waters and the “Kings”, Freddie, BB, and Albert. His quest for tonal excellence is evident by the vast array of guitars, amplification, and effects that Larry uses to get just the right sound in each song. Using a variety of classic equipment, Larry enjoys the vintage tone for the bands rendition of classic material. Of course, it’s his superb playing style and technique that makes it all work and it’s not unusual to see the guitarists in the audience watching his every move.

Frank Arcidiacono
Bass, Vocals
Rocking the house as a professional performer since 1965 has forged a bassist with confidence and passion for his music. Frank started as a drummer watching his older brother’s bands play classic 50’s & 60’s rock and eventually played with them at a young age. When his brother stopped playing, he moved over to the bass and has been there ever since. Frank has had the opportunity to perform in a vast diversity of venues from weddings, dances, and parties to clubs and even stadiums. Using a Fender Jazz Deluxe bass played through G-K amplification and Ampeg cabinets, Frank’s playing style is solid, yet simple and uncluttered. His philosophy on playing the bass is, “If you don’t know I’m there, I’m doing my job”. Forging an iron clad low to the rhythm section, his style reflects the influence of a variety of artists whose music he has performed.

Dave Silvestro
Drums, Vocals
Dave has been performing as a professional drummer since the age of 13 with a wide variety of shows, lounge bands, society jobs, and creative musical ventures in pop, rock, and world beat styles, and has been tossing lumber for the Tweed Brothers since the beginning. While playing with rock and pop bands since college has given Dave his chops, his technique has matured into a unique style. Dave provides a rock solid foundation, is an accomplished soloist, and can adapt to any music style. He recently got some new toys with this classic Gretsch maple kit in '57 Chevy style coloring. Not only are they beautiful, they sound fantastic too! He is meticulous about head tuning and the sound that his drums are providing for each performance. We welcome his outward personality and are pleased to experience his talent each night.