The First Men Of Promise 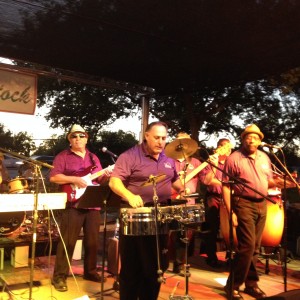 Rockin’ the Rogue Part 2 From The Fresno Bee-hive

It’s rare when you find a singing group with as much soul and Soul as the First Men of Promise. The local performers — appearing at the Rogue Festival under the name “Rockin’ the Rogue Part Two” — offer a foot-tapping, spirit-lifting show that has only one problem. It’s way too short at 40 minutes.
The group — half of which look old enough to be around when the tunes they perform were originally released in the ‘60s and ‘70s — includes according to the group Reverend George Kayajanian, Reverend Lee Pointer, Reverend Sergio Gaytan, Reverend Robert Paul, Deacon Tom Sabatino, Harry Hill, Stacey Dominguez, Ron Shapazian, Label Dan Atkinson, Eddie Gardardo and Dr. Breck Harris
The group performs classic rock and blues tunes with a gospel twist. They’re able to insert just enough of a religious message to make the material suitable for their musical ministry. It’s done with such skill, you might be convinced that the musical numbers are being performed as originally written.
One of the best examples is how they’ve taken the tune “Feelin’ Alright” — made famous by a JC (Joe Cocker) — and given it a different kind of JC (Jesus Christ) message. The original song is performed with the same zeal and musical fervor as Cocker’s version, but the First Men of Promise bring a religious passion that eclipses anything the rocker did.
Another Cocker tune, “Unchain My Heart,” takes on a whole new meaning with this group. The same goes for a spiritually uplifting version of Scotty Wiseman’s “Have I told You Lately That I Love You.”
First Men of Promise is back at this year’s Rogue by popular demand. If their other shows this year are as good as their opener, there will be a Part Three. How could you not have a band back that uses as much cowbell as they do?

The group is inspiring, spirit filled, and they ROCK!

The First Men of Promise brought joy and vitality to the block party by singing in a variety of styles. Through out the 2 hours of praise there wasn't one down moment. The audience was WITH the group the whole time. They truley brought in the Holy Spirit.

The First Men of Promise
Promise Ministry
Our Story
From every Race, Creed and Denomination, the sons of The San Joaquin Valley Christian Community heard and felt the fervor to unite under the great Christian banner of the Promise Keepers.
Christian men and boys gathered in the tens of thousands together at Bulldog Stadium in Fresno, California to agree in strength with Jesus Christ our Lord.
Our hearts came together as one as we lifted up the name of Jesus Christ and sang Praises to God as members of the Promise Keepers Choir.
As Christians and active Local members of the Fresno Area Task Force for Promise Keepers, we were blessed to be invited to participate in 19 separate Coliseum and Stadium events for Promise Keepers in California, Oregon, Washington, Nevada and Arizona. In 1998 and 1999 The Praise and Worship Team Completed 210 other local and out of the area Christian events and church services throughout California representing the Promise Keepers Task Force. We were honored to provide the Praise and Worship for the Stockton Pre-event Ceremonies for Promise Keepers.
In January of 2000 the Promise Keepers Task Force Leader felt compelled to disband the Promise Keepers Task Force locally.
The cry from the active members to remain together was heard by our Gracious Father and in March of 2000 Reverend Roy De La Garza of the Affiliated Christian Ministries and Tabernacle of Praise Churches, was moved by God to cover us with the proper Credentials and Ordinations. He recognized the sincere efforts of the men and ordained this Ministry and Pastor George G. Kayajanian (leader and Singer) as part of his own Ministry and allowed the Holy Spirit to cover us with an anointing that has moved the First Men of Promise Praise & Worship to Promise Ministries and involve themselves in Prison Outreach, Youth Correctional services as well as Hospitals, Medical and Care Facilities and our own Churches. The Fresno City Police and Local Churches teamed with us for Local Block Parties, Street rallies and any other Christ centered event. God has called us to share his Word and Spirit through Music and Ministry.
We were blessed to present several “Day of Promise 2000”; “For Such a Time as This” events, at the Fresno and Bakersfield Convention Center Arenas. Launching, Promise Production Company, a full scale performing arts Ministry,.
These were 10-hour productions focusing on Evangelism and Christian family skills. We featured the testimonies of “Smokey Robinson” and many Major Christian Musical Artists, Pastors and Christian Leaders from all over the world participated. Over 143 separate churches representing 31 denominations prayed and worshipped God together. Over 6,000 commitments and re-commitments were registered and followed up by the local clergy attending.
Our focus in 2001 was and still is assisting Churches with Men’s Ministry and Outreach Programs such as mentors for Jails, Prisons Youth Detention Halls and Boot Camps. Teaching programs for men, women and children are still being offered.
Our Major Project for 2001 is “Promise Re entry Centers” which God has envisioned us with. The Lord has instructed us to create single-family homes in Fresno, California that will house 6 men or more that have been classified (DUI/addicts/alcoholics at Risk) as an alternative to jail or incarceration. Our program uses a Christian Mentoring Program accompanied with Behavioral Improvement Programs that teach life skills to these men with the Love of Jesus changing them into productive and moral Christian citizens.
In 2001 Our Ministry also associated with outside Ministries to begin the implementation of a Christian based Re-Characterization program called One Step Closer. This program is acceptable to focus on the family home.
In 2002 we help create and found “Bringing Broken Neighborhoods Back to Life’ A Community/Police Faith based Initiative taking Christ to the streets.
The same year 2002 we were invited to perform for the Billy Graham Crusades in Fresno and were commissioned to become the Operation Starting Line Ministry for their local Prison Outreach Services, ministering under Franklin Graham and Chuck Colson
In 2003 we founded and operated Promise Homes for Children associated and working with the California Child Protection and Foster Care Agency.
2005 introduced the First Church of Promise an all Denominational Church allowing our re entry Candidates and families a common place to worship Christ Jesus together.
2008 introduced La Primera Iglesia De Promesa an all Spanish speaking Church with the same all Denominational approach for worshiping Christ Jesus.
, 2009 produced First Church of Promise II. Serving all Christians and those seeking God in Fresno without imposed doctrines.
One of our founding Pastors, Pastor Lee Pointer (lead Singer) is the Pastor of the Bethlehem Baptist Church of Fresno. Pastor Lee has also founded and operates many more outreach Ministries in the Southwest Fresno area.
Another Pastor, Pastor Paul Irwin (bassist) is the Pastor of the Presbyterian Church of Fowler.
Our Worship Minister Robert Alan Paul has always directed the First Men of Promise from its inception..
All of these Ministries are now associated with the First Church of Promise and the First Men of Promise through Sr. Pastor and Founder George Kayajanian, all with Gods grace;
The First Men of Promise and Promise Ministries remains one of the most active Ministries in the Fresno area.
We thank you for your interest in the Promise Ministry and have included with this letter other information that may help you use the many gifts and talents that God has blessed this Ministry with.
We will always pray for you as you work with us to advance the Kingdom of God. May Our Almighty God Bless and Meet Your every Need.