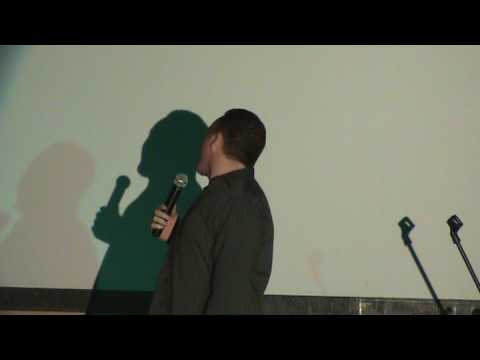 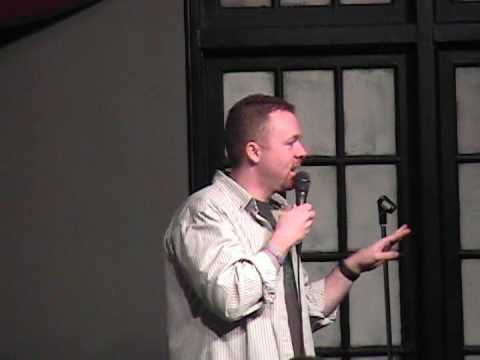 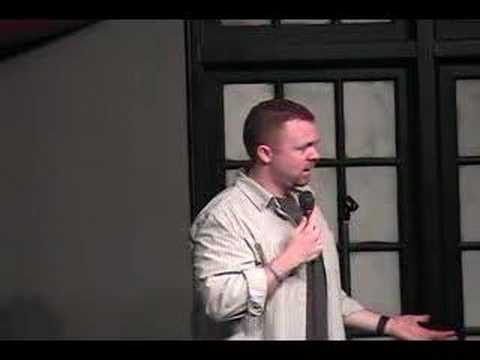 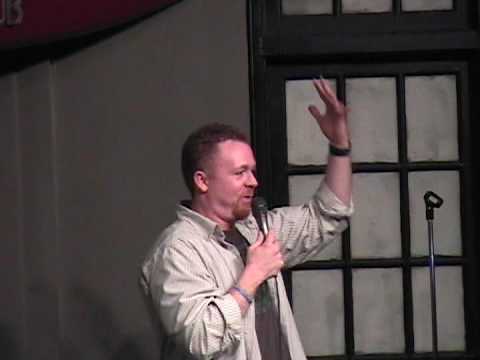 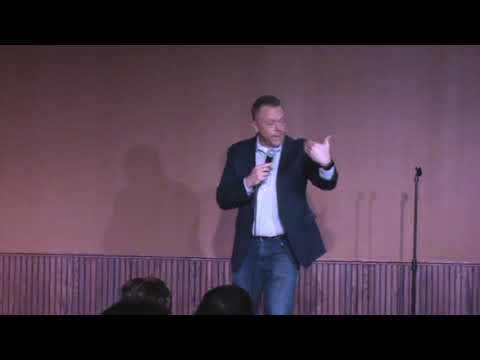 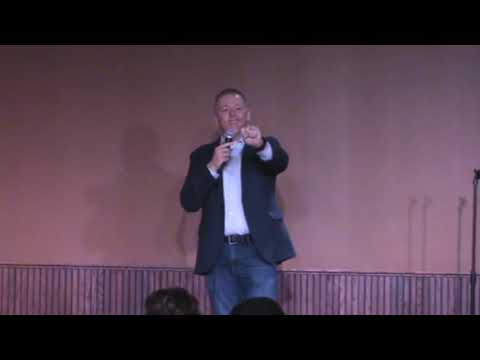 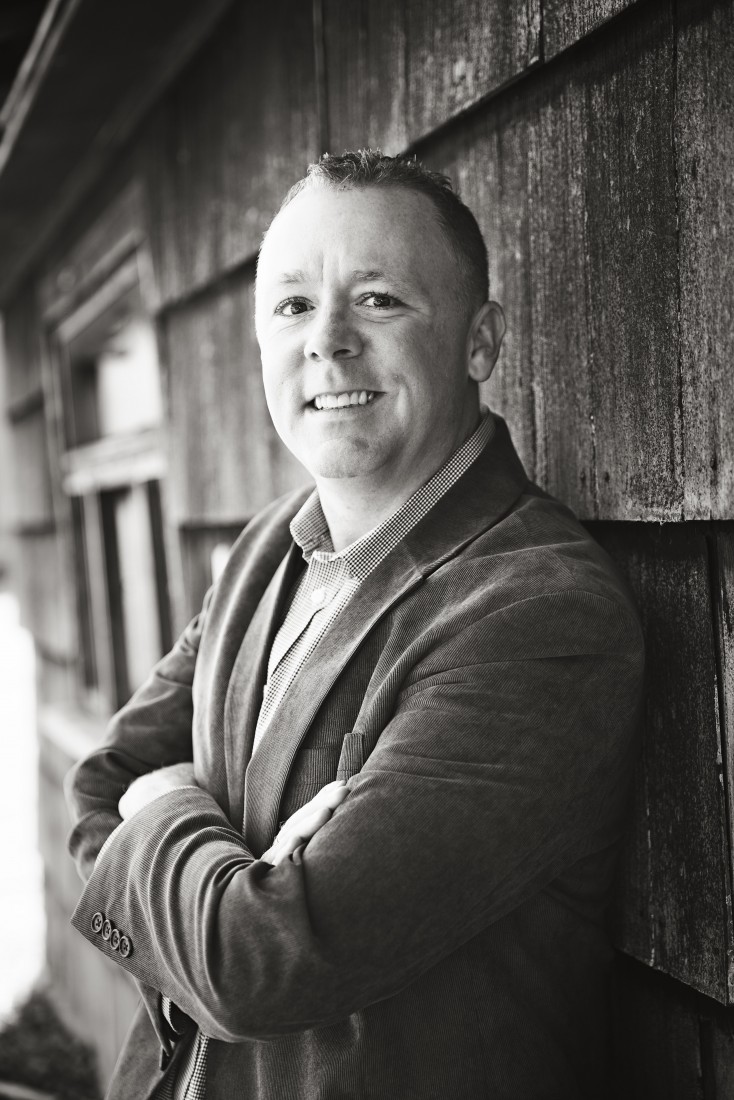 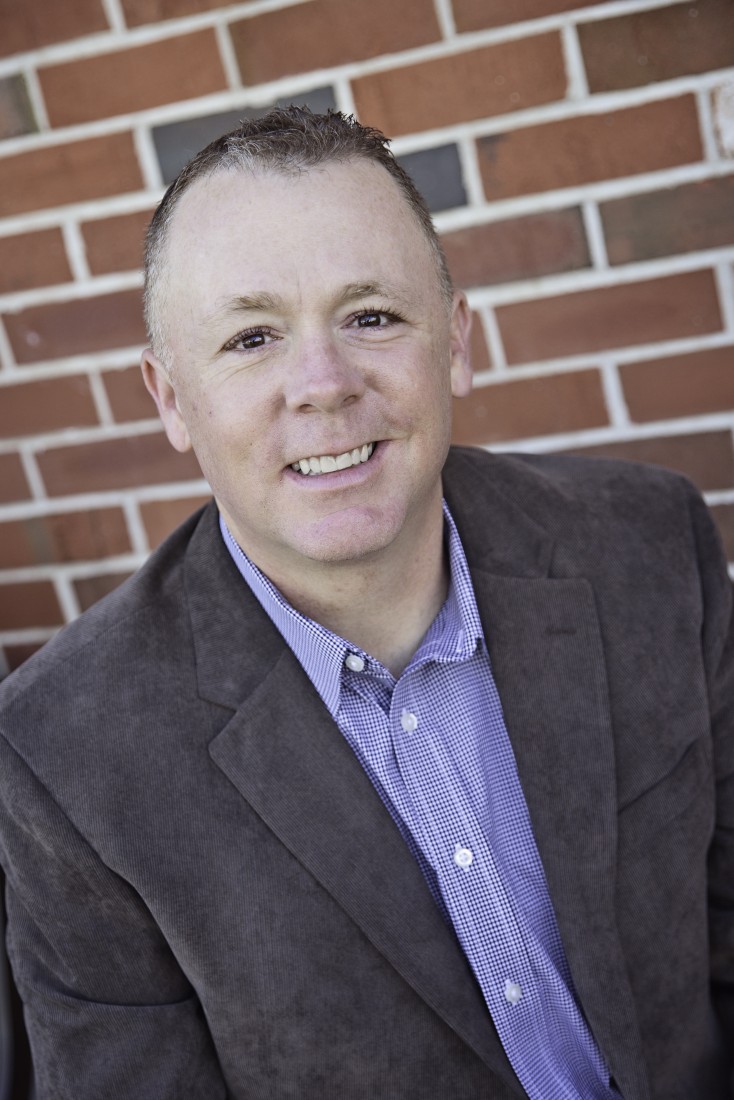 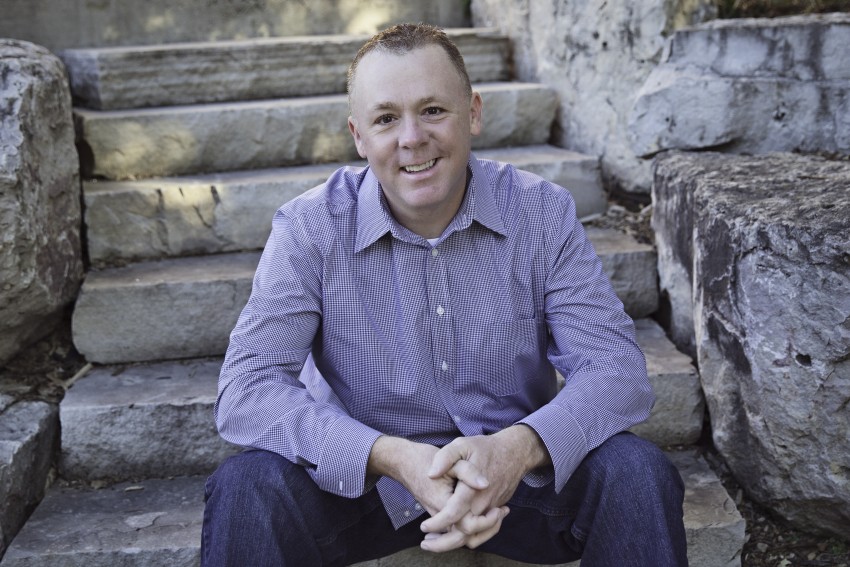 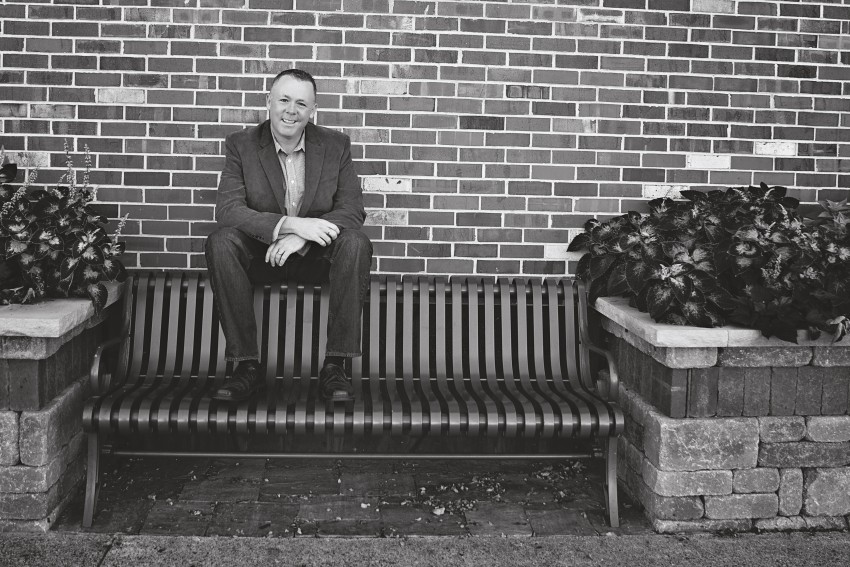 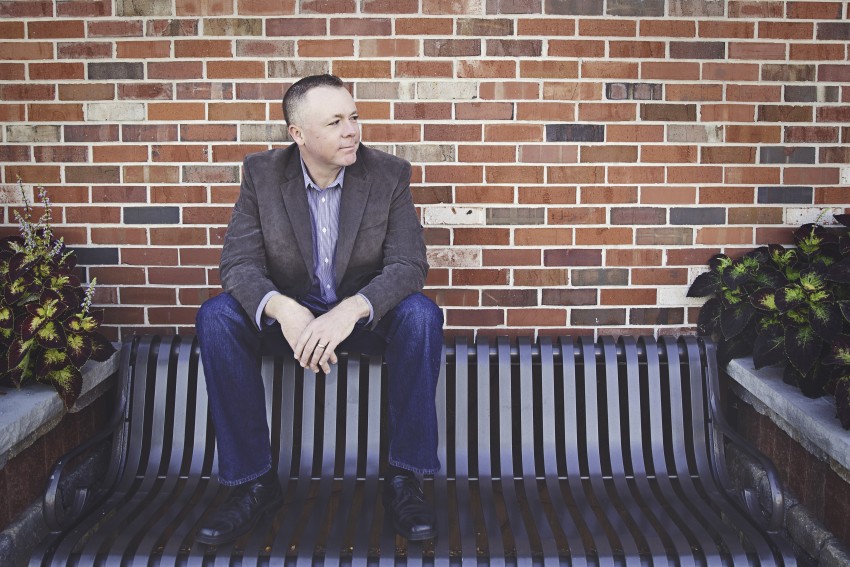 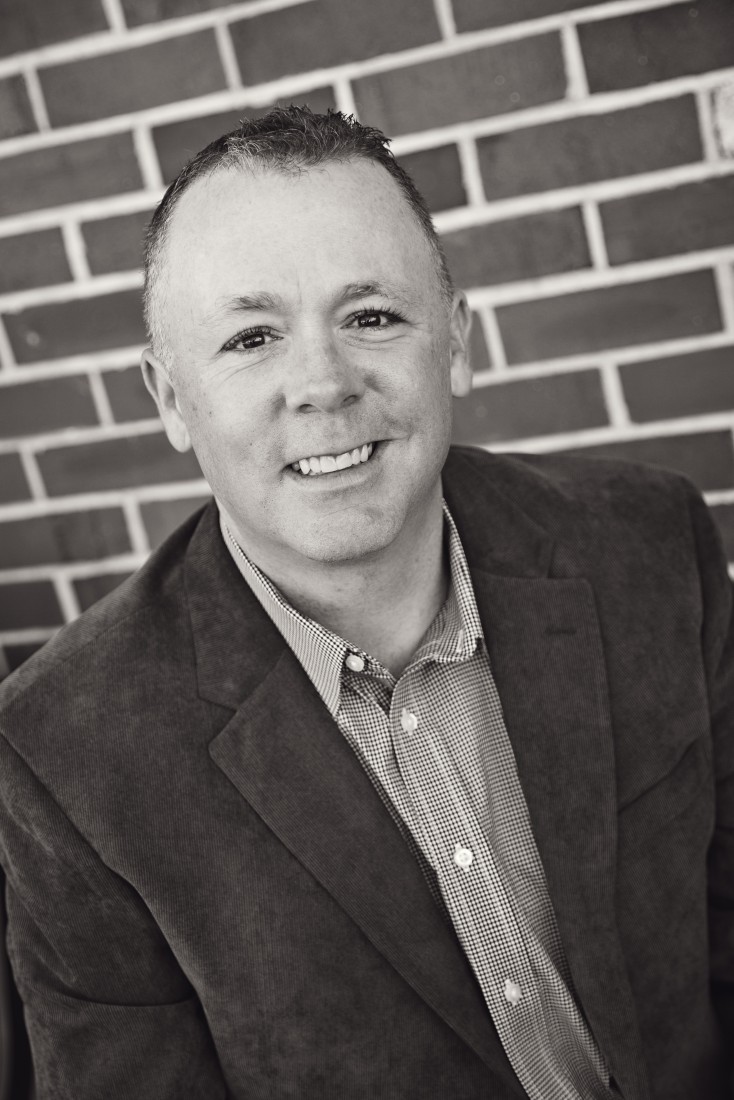 Todd Andrews - Clean | Professional | Funny. Todd is from Boston, but now lives in Western WI. His performances are wonderfully woven stories about the observations and trials of a "Boston Boy Lost in Wisconsin". Let Todd's witty charm and likable personality wrap you into his funny adventures of living in the Midwest.

Looking for a corporate entertainer with clean comedy material? Todd holds an MBA from the University of St. Thomas - MN, and a BS in Plastics Engineering from the University of MA - Lowell. Todd's education and professional career experiences, coupled with his clean material, high energy, and quick wit, makes him a perfect match for your corporate event or private party!

Todd is a great comedian that engages the audience from start to finish. He knows how to keep everyone entertained from young to old. He does a great job at altering his content based on his audience. Everyone had a fantastic time!

Really good in a small group

We had a work function in Fargo ND. Only 10-12 people. Didi a tremendous job.

Thank you again for having me at your event. I have a blast. You have an amazing group of folks working with you. I hope the rest of the week in Fargo is productive and i hope you have a fabulous Holiday season!!!

Todd did a perfect job for us at our corporate team building event. He took the notes we gave him about the company and upper management and used the information flawlessly! The best part was his adlibbing. Just running off the crowd energy, comments and what he was observing. Perfectly curated for our manufacturing, central Minnesota group. Every single person enjoyed his performance! Well done, Todd and Thank you!!

You all we awesome and made my job so much easier. I had an absolute blast with all of you. You have a great culture and it shows. Stay safe and be well.

Todd was great. He connected local humor and personalized his material to our crowd. He made our company holiday party memorable. His act is what everyone is talking about the following week at work.

We booked Todd for our Corporate Party and he did an amazing job! Our team thoroughly enjoyed Todd's performance. Todd interacted with our audience, which made it even more hilarious. We received nothing but positive feedback from our team that evening. A week later, we are still receiving compliments on the performance. I'd absolutely recommend booking Todd!

Todd is hilarious, he was excellent!

Todd is hilarious! He read the room very well and did a great job with our small crowd and would do equally well to a huge audience. He is professional, and definitely a crowd pleaser. Do not hesitate to book him!

Thank you so much for the very nice words, Amy! I had an absolute blast with you and your group. Such a great bunch of folks you have working with you. I hope you have a great Holiday Season!!!

Todd Andrews was so funny and everyone enjoyed themselves.

I cannot say enough good things about Todd Andrews. He was very professional and so funny that none of us could stop laughing. He made our event a success and I would recommend him to anyone. Thank you Todd for being so awesome! We really enjoyed meeting you and wish you continued success. Deb Jensen and Adam Swanda.

Hi Deb, Thank you for the wonderfully kind words. Your group was amazing and really made my job so much easier. It was so nice to meet you and chat with you before and after the show. I hope we cross paths again in the near future. I hope you have a fabulous rest of 2019!!!

I had many staff come up to me telling me they so enjoyed Todd's show. Everyone had a great time and I had great reviews from our 140+ staff.

Laurie, Thank you again for hiring me for the show. I had an absolute blast!!! You have an amazing group of people who made my job even easier. You can tell you have a great culture and they do great a job working with the young folks of WI. Have a great rest of 2019!!!! Todd

Todd was just what we needed

We're a group of grief-survivors who needed a good laugh, and Todd delivered. The room was roaring from start to finish. His jokes were relatable and hysterical, and his interaction with the audience both during and after his set was exceptional. He was The guy for our event, and we could not be happier to have had him.

Thank you again, Val, for having me at your special evening. It meant a lot to me to be a part of it and I had a blast with you all. You are all amazing people and this was one of my professional and personal highlights.

Todd was hilarious, personable, and so easy to work with! I would highly recommend him for a corporate event, or any other kind.

Todd was entertaining and a lot of fun! He had everyone laughing. I would definitely recommend Todd to anyone looking for a great comedian.

Todd Connected quickly with the audience before the event and routine had them rolling in the isle...preparation for this type of event was obvious and spot on.
Todd spent time with everyone and gained their confidence quickly allowing the audience to enjoy his humor. Many want to know his schedule so they can attend.
Major snow storm hit the area but Todd arrived on time. Made the event a classic.

Thank you, George. I had a great time. What a wonderful group of people there in Big Lake. Made my weekend!!!

Todd is a great comedian!

We booked Todd not knowing much about him but he certainly was a fun and entertaining surprise! He kept our group laughing during the whole show. Our group varies greatly in age but that made no difference. I would highly recommend him to any group....his humor was timely, pertinent and clean enough to not offend anyone but yet a little edgy and certainly worth every penny we spent.

Thank you so much for being a great crowd. You made the night easy by being an awesome collection of people. I hope you have a great 2015!

Typically a "PG-13" rating (no vulgar words or material) with the ability to go up to "R" if requested. I have the ability to easily add or omit any "S" words and "F" words from a routine depending on what the event organizers want. I have the ability to ad lib freely and can work the company or event into my routine. My performances are fun and sometimes filled with crowd interactions (when and if I discover the audience is enjoying the interaction). While I may poke fun at people in the crowd during any crowd interactions, it is never done in a mean way or demeaning way. Only in fun humor. My goal is to ensure the audience has a fun and memorable experience!

Organizers can expect me to be prompt and professional. I take great pride in what I do and love when I do repeat shows for clients.

Todd Andrews began his comedy career by establishing his roots in the Boston comedy arena. Eventually moving to his wife’s hometown in Wisconsin, Todd took the Midwest comedy scene by storm. With his East Coast attitude and sharp wit, the crowds are overwhelmed with laughter!

Todd Andrews began his comedy career in the Boston area (where he grew up), but eventually moved to his wife's hometown in Western Wisconsin. Todd's performances are wonderfully woven stories about the observations and trials of a "Boston Boy Lost in Wisconsin"; focusing on his "fish out of water" experiences, his wife & family, and other odd life events.

Looking for a corporate entertainer with clean comedy material? Todd holds an MBA from the University of St. Thomas - Minnesota, and a Bachelor of Science in Plastics Engineering from the University of Massachusetts - Lowell. Todd's education and professional career experiences, coupled with his clean material, high energy, and quick wit, makes him a perfect match for your corporate event or private party!

Let Todd's witty charm and likable personality wrap you into his funny adventures of living in the Midwest. Don't miss your opportunity to witness Todd's remarkable, original comedic performance. He will leave you begging for more!

I typically need a spot light and sound system. I have this equipment I can bring to the performance, but I prefer it if the venue can provide this. Please note that my equipment is portable and not exactly what a large venue may have (i.e. Venues may have spot/stage lighting installed on ceilings or built in sound systems).

Some form of "stage" is highly desirable as it elevates me so all audience members can see me and enjoy the performance.

My only requirement is that there is no eating or clearing of plates/glasses during the performance.