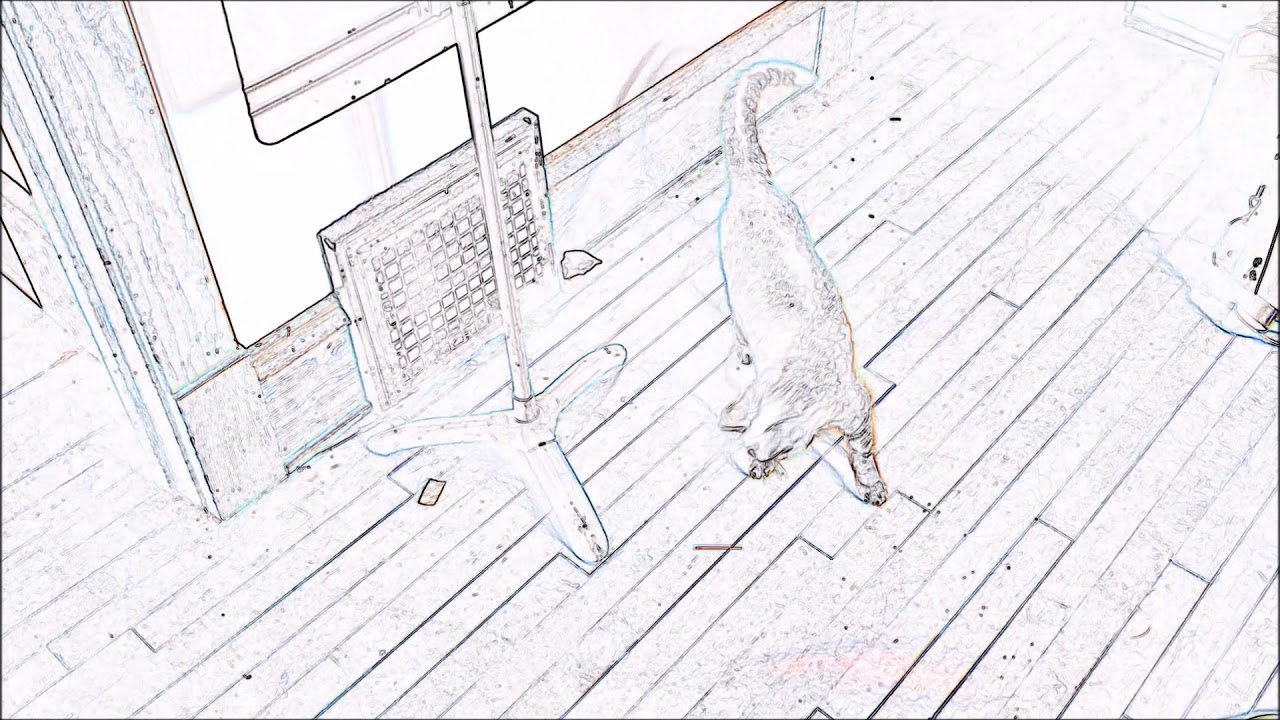 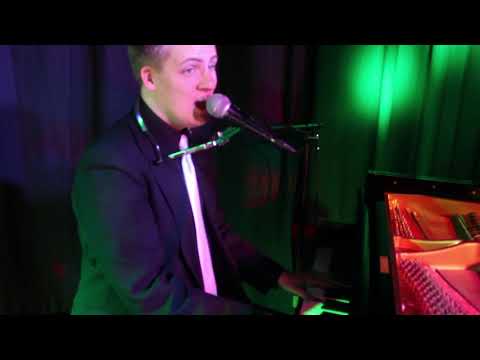 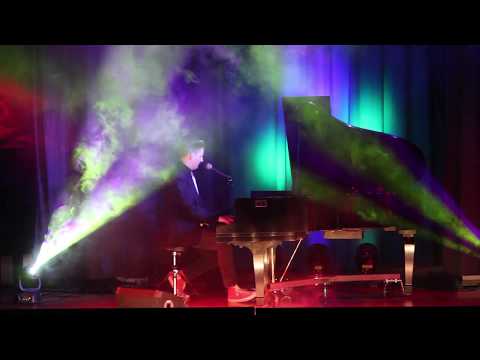 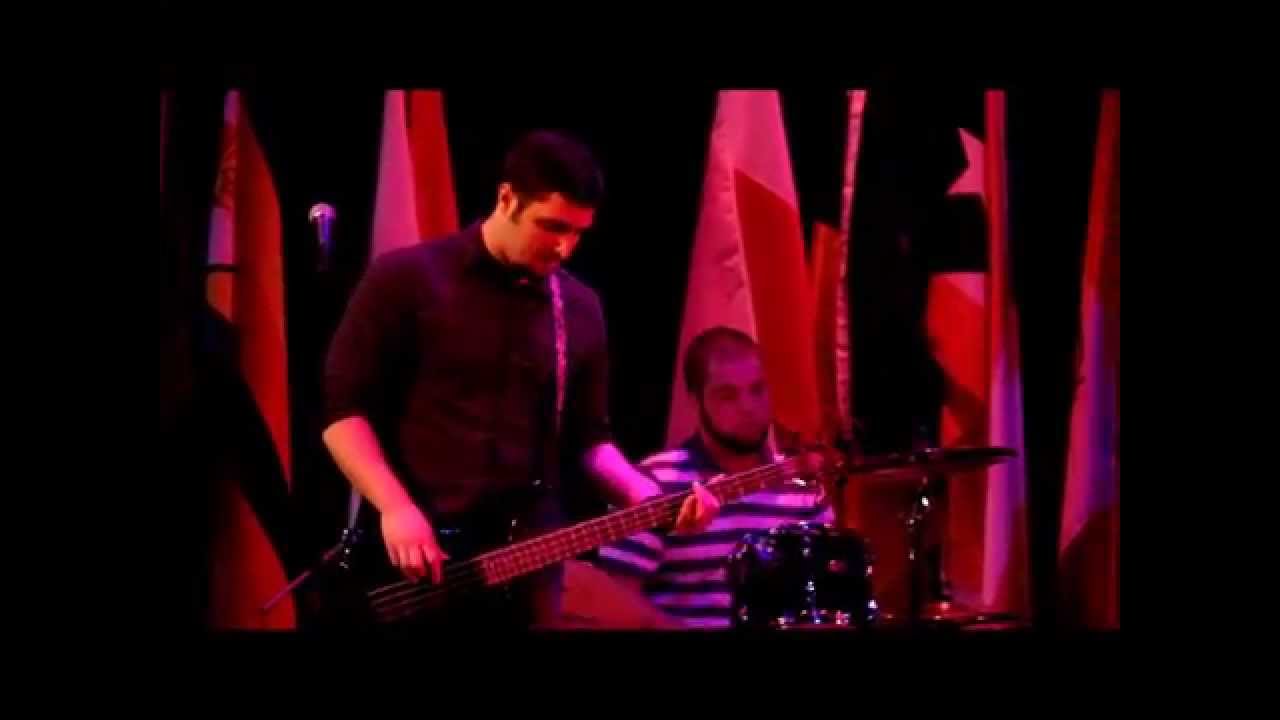 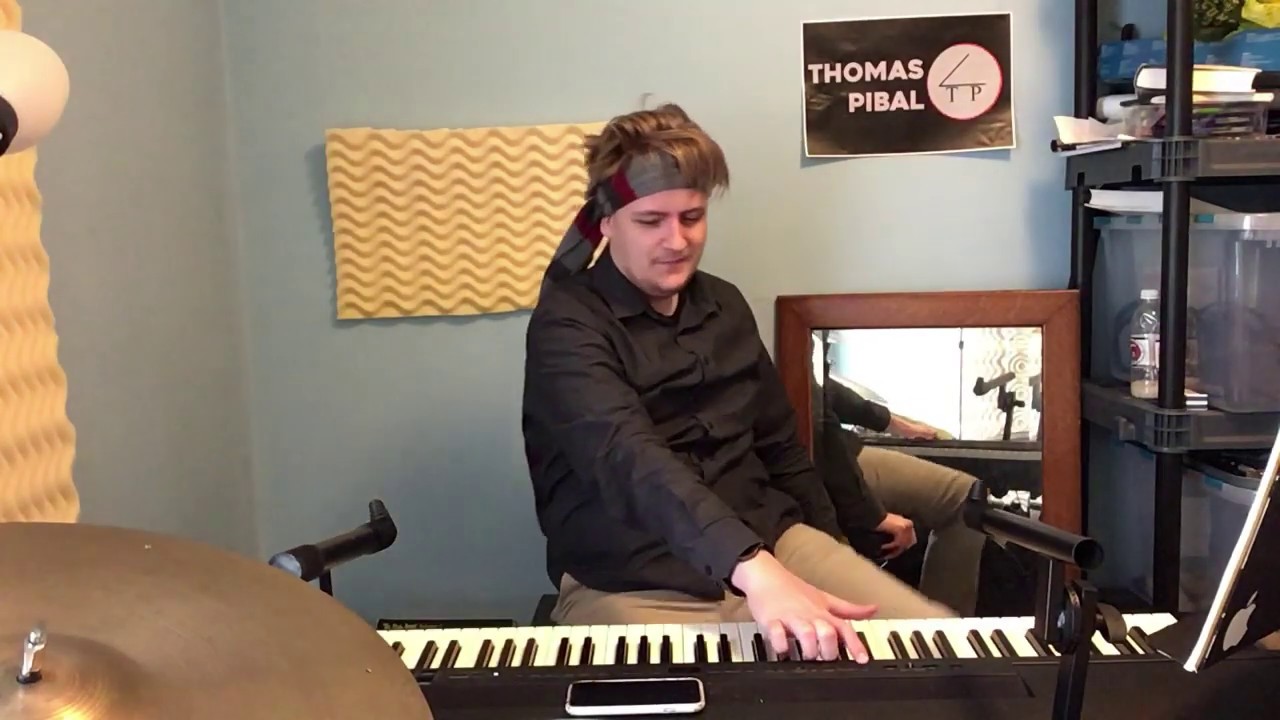 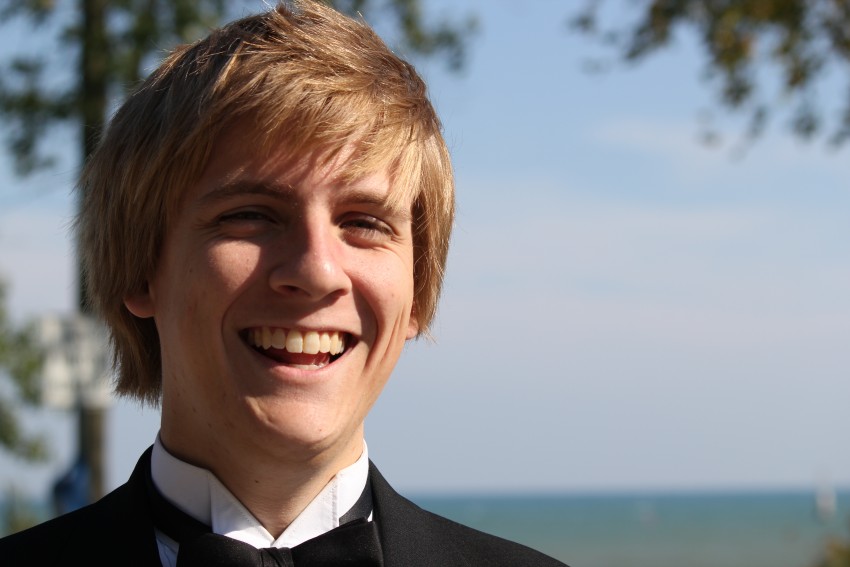 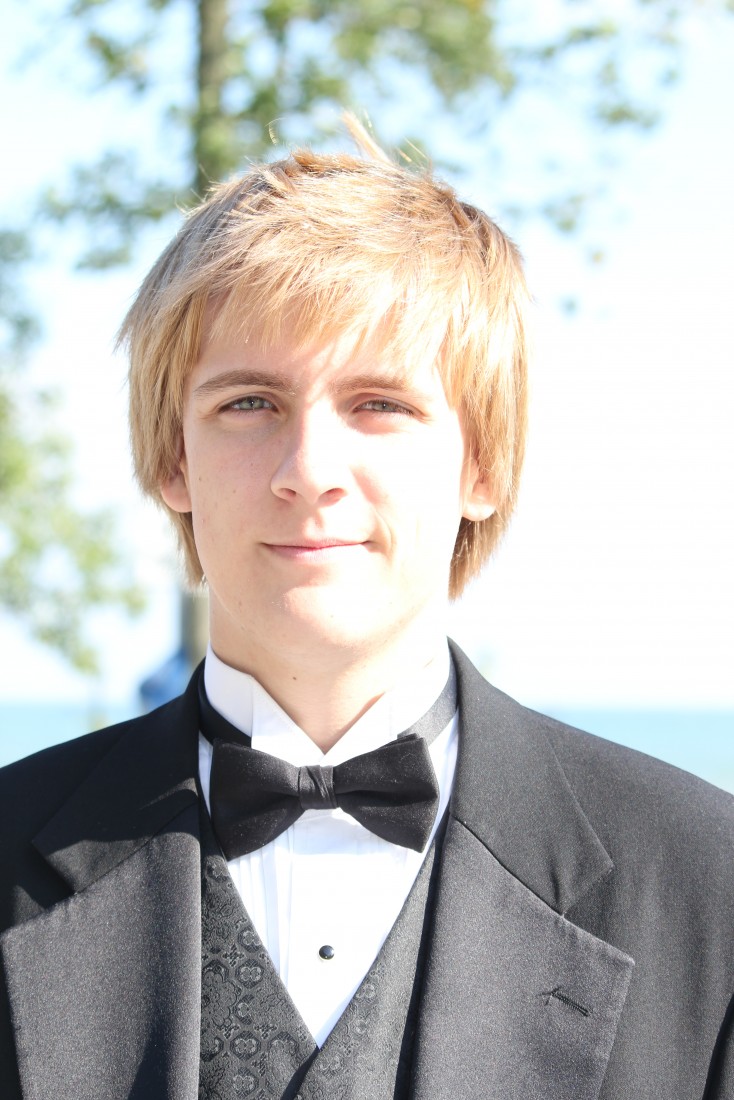 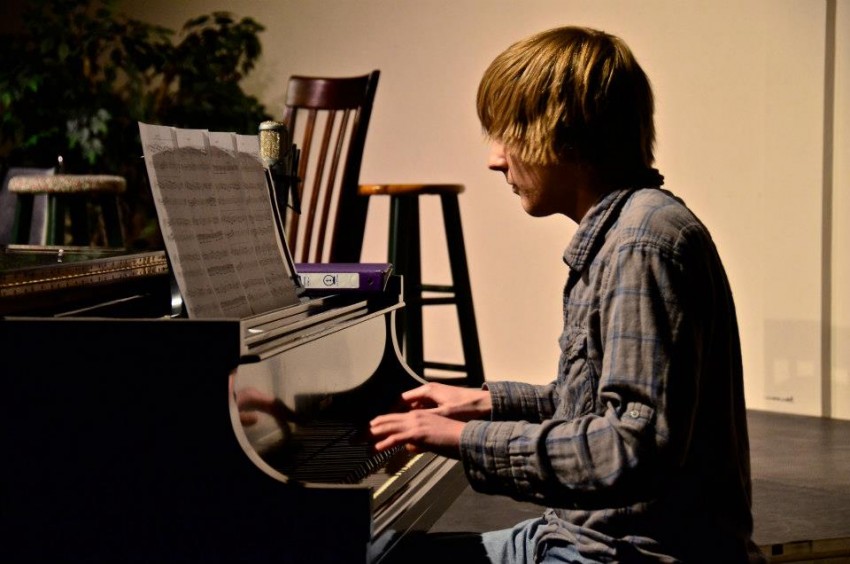 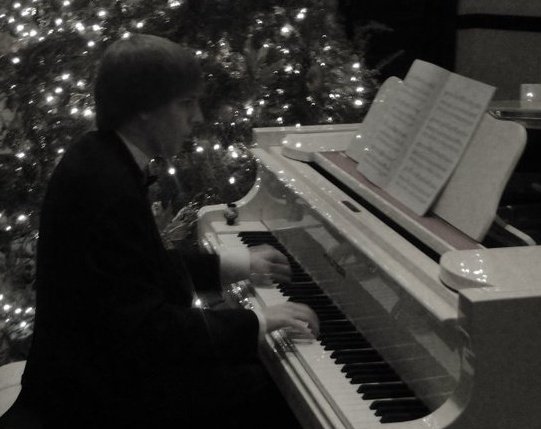 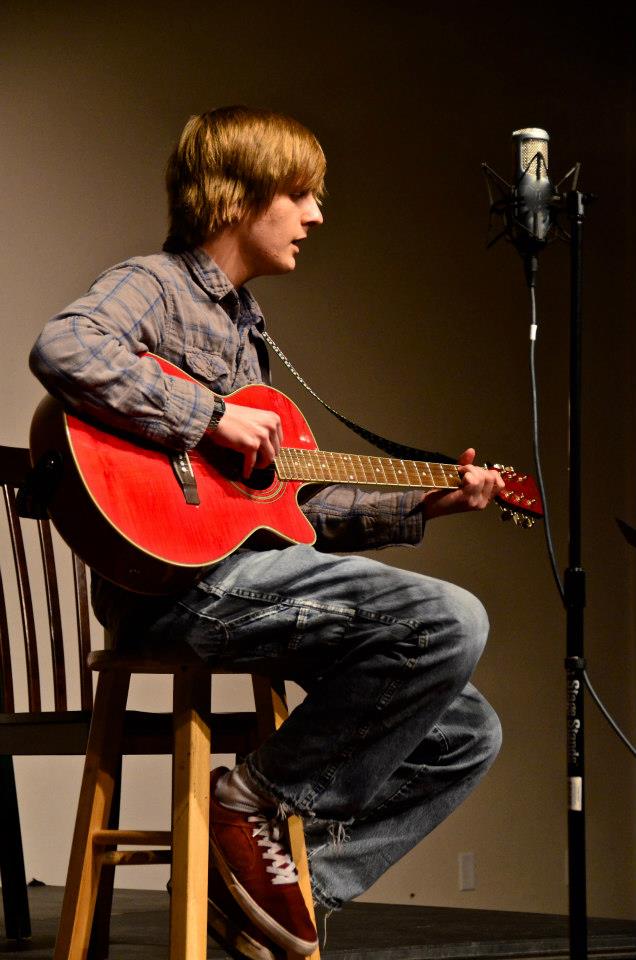 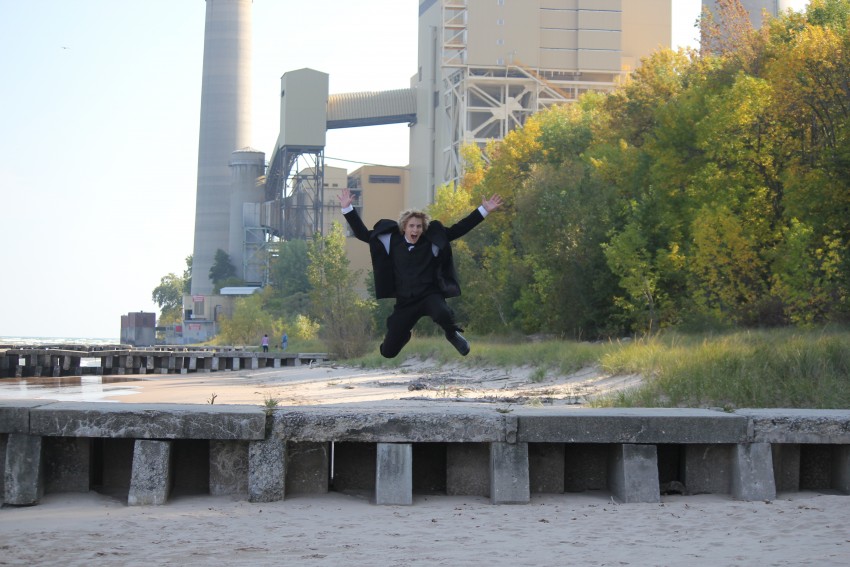 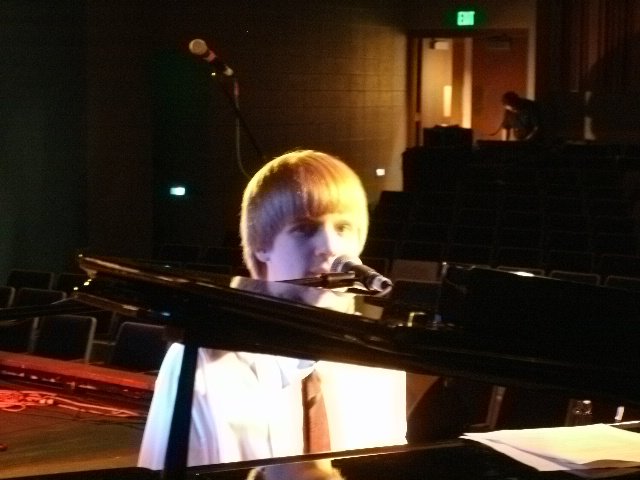 I am the human jukebox! I love to play shows where I play piano and sing, if you have a wifi connection I can get sheet music for just about any song you want to hear in the event it doesn’t already exist in my library of thousands of songs. I am often hired to play dinner/lounge music at banquets, to play for wedding ceremonies, birthday parties, funerals, corporate events and to accompany vocalists, instrumentalists and choirs. I love playing pop and jazz! I have my own keyboard, an amp and a microphone, but if you have good equipment at your venue I'm happy to use it. I'm also happy to travel outside my travel distance if I can get a little extra money to cover the travel expenses.

Thomas took what we asked him to play and made it into something even more beautiful and emotional than I could ever hope. He was wonderful and easy to communicate with and I would recommend him to any ceremony looking for the perfect piano music.

Thanks so much Caitlin! Sorry we didn’t get more of a chance to talk-I had to get on the road to the next gig! If you ever need anything else you know how to get in touch. Congratulations to you both! I’m so glad you appreciated my work and I hope your new union is blessed with many years of peace and joy!

After having to postpone our wedding several times due to Covid-19, we turned to gigsalad to book last minute. Thomas responded so quickly, arrived to our wedding prepared, and was so responsive. We would 100% work with him again. HIGHLY RECOMMEND.

So glad I could help and glad you were satisfied with my work, thanks again for the gig and thank you for the review! Congratulations to you both!

Thomas, did an excellent job playing the piano and organ for our wedding ceremony. He was very professional, easy to work with, and maintained great communication. Thanks Again Thomas!

I’m so glad I could help with your special day! Thanks so much and congratulations!

Thomas showed up on time, set up easily and quickly, provided excellent background music (some with vocal, some without) for our cocktail hour/dinner/networking event. You should hire him!

Thanks! I enjoyed meeting you and was happy to be a part of your event!

Thomas was our ceremony pianist the weekend of 9/3/16. He was so great prior to the big day, as we were in constant contact making minor changes to the music we wanted him to play. It also meant so much that he took the time to be present for our rehearsal dinner the day before. Initially we had received a lot of contact from other pianists who would not also attend the rehearsal. Thomas was present with piano and all to help us practice the following days' events.

I am happy that you were satisfied with my work and I appreciate the review!! Congratulations on your big day!

We hired Thomas for our wedding ceremony about two weeks before our wedding held on June 20 at the Botanical Gardens in Green Bay, Wisconsin. With such a short notice, Thomas was able and willing to learn any music that we wanted him to play during our ceremony. He even mentioned that if he was not familiar with something we wanted he could get the music and learn it for the wedding. His playing was beautiful and exactly what we were looking for. He is very talented, extremely professional and we will definitely be recommending him to anyone looking for a pianist. Thank you Thomas!

You are most welcome! And thank you! I'm extremely pleased that I was able to meet your expectations and add something special to your wedding day. Best of luck, and congratulations!

Thomas's performance was a highlight of our wedding! He did such an amazing job. He learned, played and sang two songs that are not "typical" wedding songs and he did an excellent job. Our only regret was not having him sing and play more.
I would hire Thomas for any event and I cannot tell you what a professional he was. On time, prepared and courteous. He was just such a nice person and put us at ease that he would perform, and he exceeded our expectations. We recommend him for any event you have.

Thank you so much Thomas!

When I'm hired to play a show, an audience member may hear songs they are very familiar with, they may hear songs they are unfamiliar with. They may laugh, they may cry, and if they don't at least they will be entertained and intrigued. In my opinion, if someone walks away from my show thinking "same old stuff, I've seen that before" I haven't done my job well.
When I'm hired to play lounge music an audience member can expect to hear delightful, pleasant music playing in the background of the event. If I'm playing at a wedding, they can expect to be impressed by the elegance of the music and touched by the ceremony. I am a professional dedicated to serving the needs of my clients and entertaining my audience.

Thomas Pibal eats, breathes, sleeps and lives music, although sometimes he eats pancakes and breathes air, too. Thomas began his musical journey at age six at the piano, and after several years he decided he wanted to quit studying music. His mother wouldn't let him, and it turned out to be one of the best parenting decisions she ever made.
For many years, Thomas has built a reputation as a skilled instrumentalist, original artist, accompanist and teacher. As of this writing, Thomas is 25 years old. He has played in at least six bands and currently plays keyboards and sings backing vocals for "The Electra Color," whom he started playing with in 2012, based in Fond Du Lac and then Appleton, Wisconsin. Thomas is also playing with a new group as of summer of 2017: a jazz trio called "Jive Safely," for which Thomas plays drums.
Thomas started teaching private lessons in 2006 when he was still in 8th grade. Thomas has worked as the staff accompanist at Lakeland University and Silver Lake College, the rehearsal accompanist for the Sheboygan Symphony Chorus and stepped in as the choir director at the University of Wisconsin - Fond Du Lac during their spring 2016 term. Thomas also works as a freelance accompanist for various high schools and theatre companies among other clients, and has also filled the role of rehearsal accompanist, music/vocal director and pit director for several musicals.
Thomas earned the rank of eagle scout before graduating high school in 2010. Thomas has one self-recorded/produced album of original songs titled "Demography," which he released in 2011.
Thomas graduated from Lakeland College (Now Lakeland University) on May 4th, 2014 with a bachelor of fine arts degree with an emphasis on vocal performance and pedagogy. Thomas was a co-recipient of Lakeland College's "Outstanding Overall Music Student" award in 2014.
In 2015 The Electra Color released the album "The Girlfriend Experience" which Thomas helped write and record. The Electra Color was nominated for the Wisconsin Area Music Industry's "Best New Band" award in 2015. Thomas was nominated for the WAMI's "Keyboard Player of the Year" award in 2016.
Thomas started learning the craft of sound engineering in 2016 while shadowing some sound production companies and worked as a sound designer for the Sheboygan Theatre Company.
Thomas married his wife Sara in 2015 and they currently reside in Sheboygan, WI.


If you hire me for your event you can expect to be hiring a well trained, reliable, friendly, experienced professional musician who is enthusiastic about my work and dedicated to making sure your event is successful and my money is well earned.

If I need to provide my own keyboard I will need somewhere to plug it in. If you need me to perform in a larger venue I also need an outlet to plug in an amplifier.

I have three sets ready to go, one is three hours of covers, the second is covers and originals and the third is just all of my performance ready original material which clocks in at about an hour. In no particular order I have included each one below. I am always making tweaks, changing the order and adding or removing songs but this should at least give you a good picture of what I usually do.
Original songs:
-Bugs
-Sweet Talkin
-Missing You
-Imagination
-How Sweet It Is
-Autumn Leaves
-Not What I Meant To Say
-Time for Bed
-Fish Like Me
-The Synonymous Self
-The Oil Song
Covers:
-How Many Kings - Downhere
-Drops of Jupiter - Train
-Instead of a Show - Jon Foreman
-Army - Ben Folds Five
-Rock and Roll Nerd - Tim Minchin
-A Team - Ed Sheeran
-When She Loved Me - Randy Newman
-At This Moment - Billy Vera
-Your Song - Elton John
-When I Was Your Man - Bruno Mars
-Say Something - A Great Big World
-Daniel - Elton John
-Fly Me to the Moon - Frank Sinatra
-Piano Man - Billy Joel
-New York State of Mind - Billy Joel
-Just The Way You Are - Billy Joel
-Movin’ Out - Billy Joel
-My Life - Billy Joel
-Don’t Ask Me Why - Billy Joel
-Lean On Me - Bill Withers
-I Want It That Way - Backstreet Boys
-You’ve Got a Friend in Me - Randy Newman
-Short People - Randy Newman
-Daughters - John Mayer
-Closing Time - Semisonic
-Loser - Beck
-Wonderwall - Oasis
-Under The Bridge - Red Hot Chili Peppers
-100 Years - John Ondrasik
-Island in the Sun - Weezer

Pam B. said “Joe and Jeff were outstanding and very entertaining!!! Our group loved them! Thank you again!!”

Alexis B. said “Felix and Fingers absolutely made my party a success. Chris and Terrell read the room perfectly. Everyone had a great time. There wasn’t a dead moment.…”