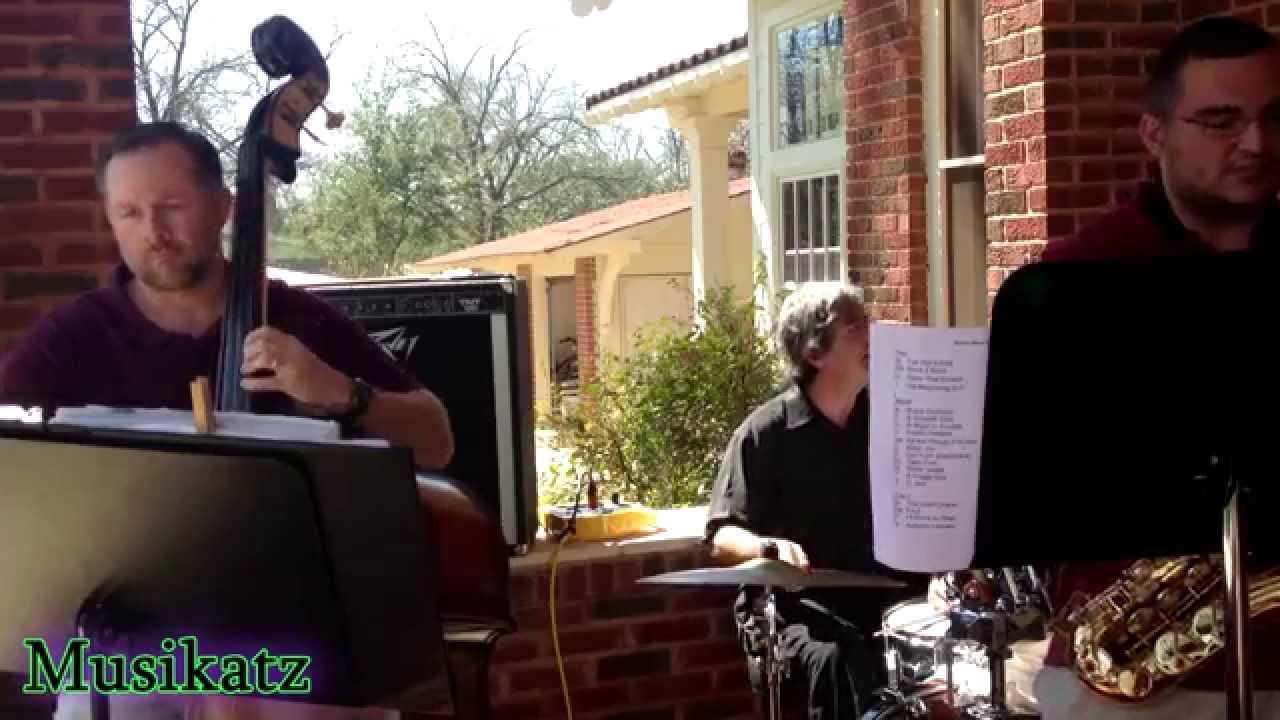 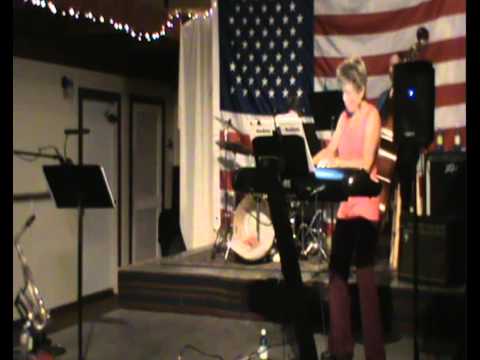 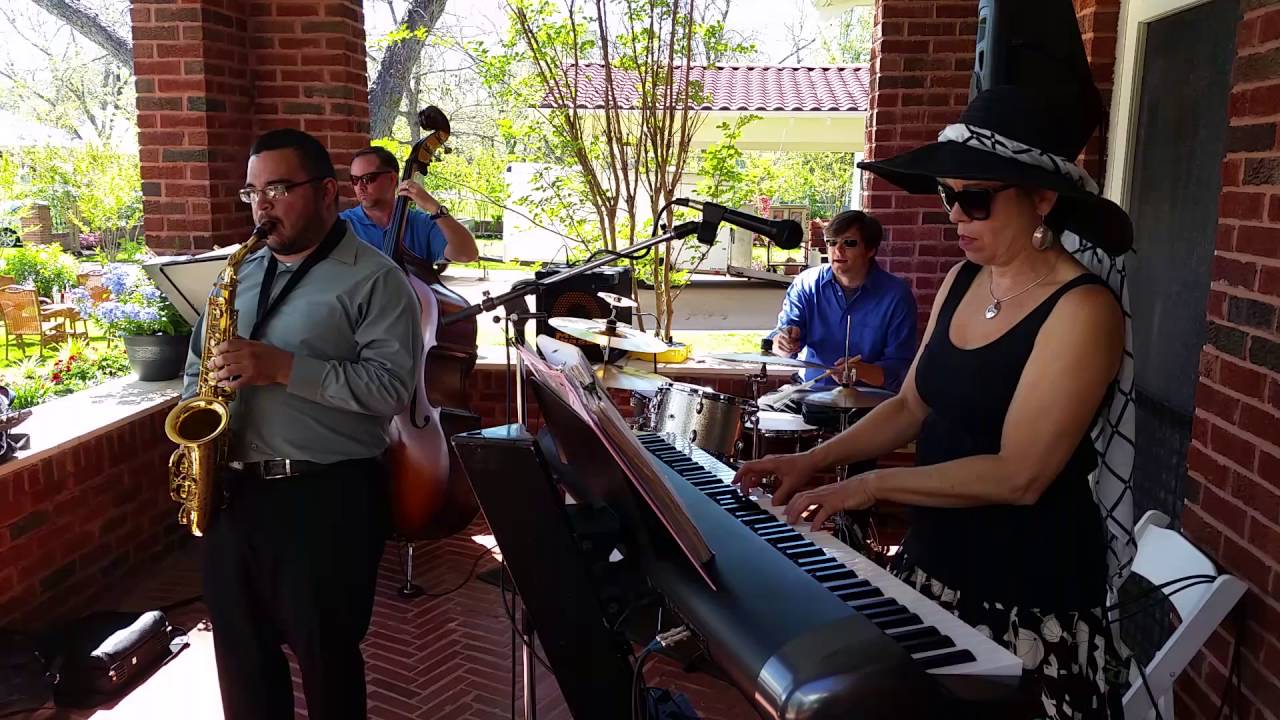 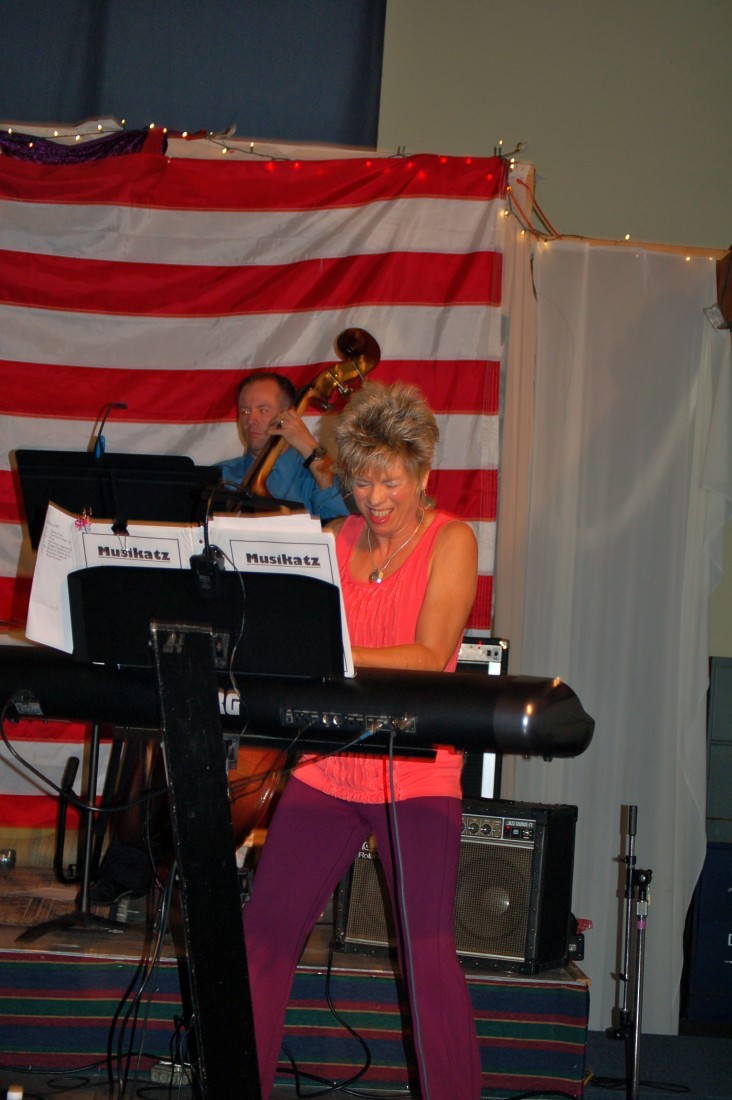 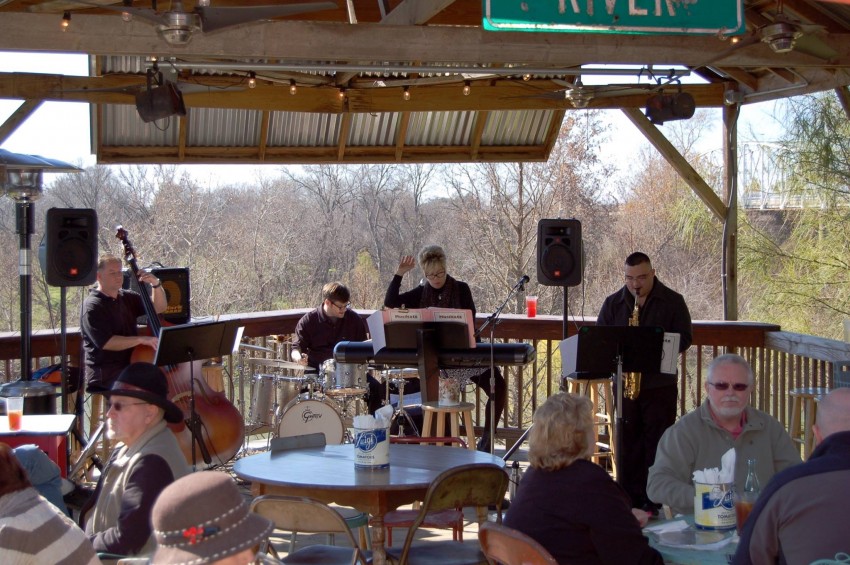 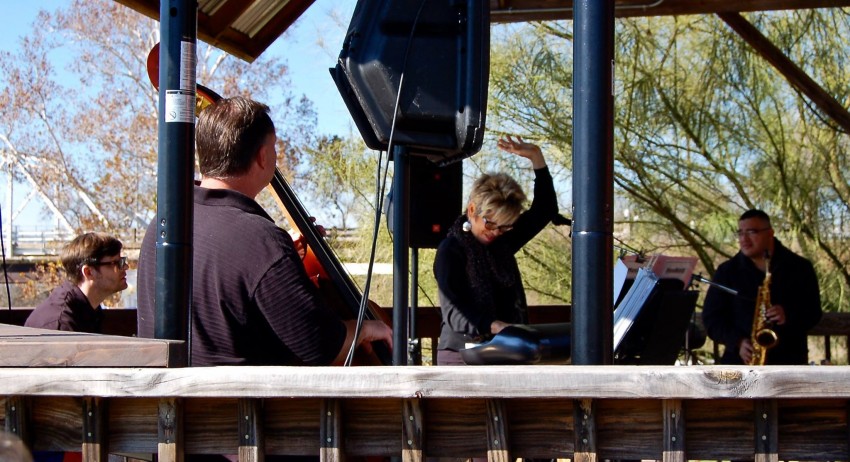 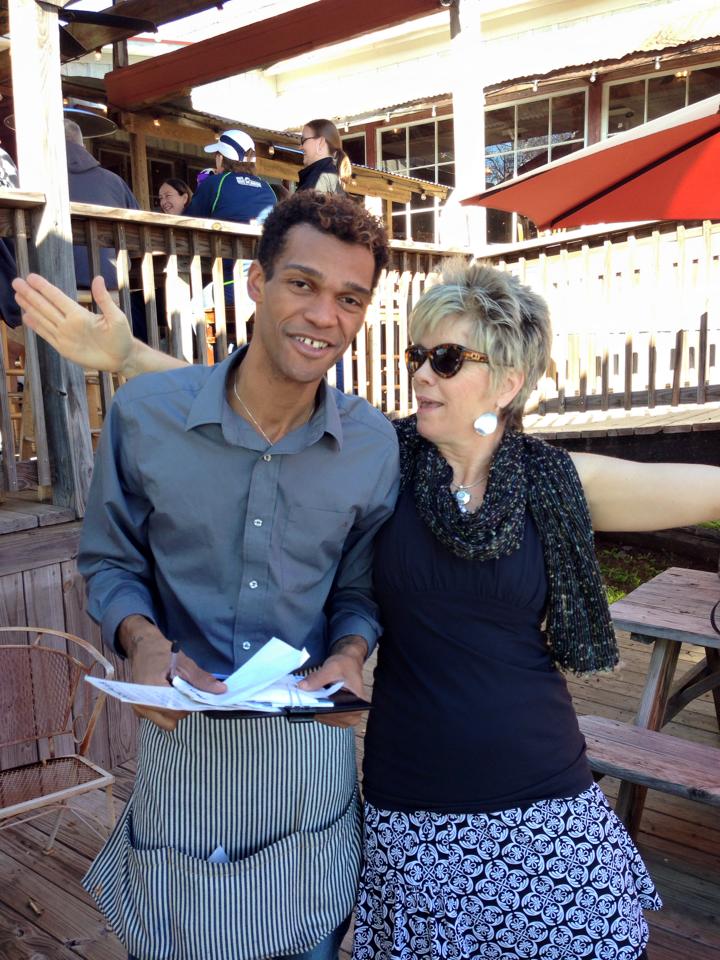 Friends diggin' the 'Katz' at Neighbor's in Bastrop 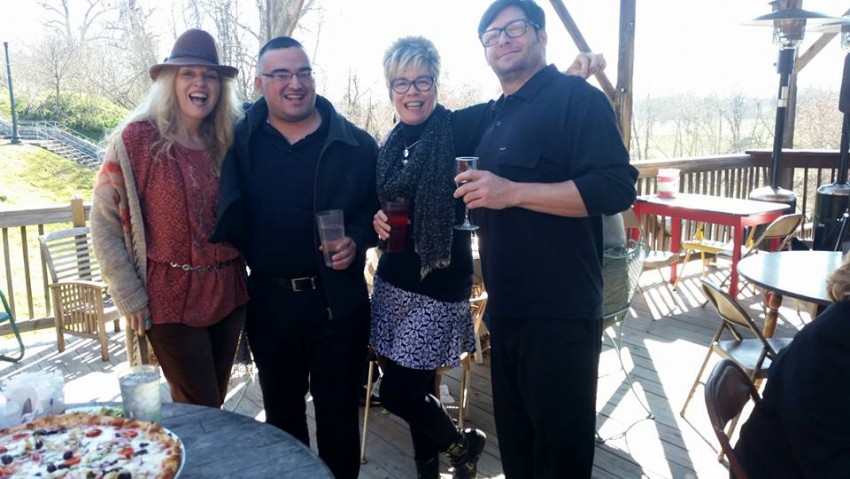 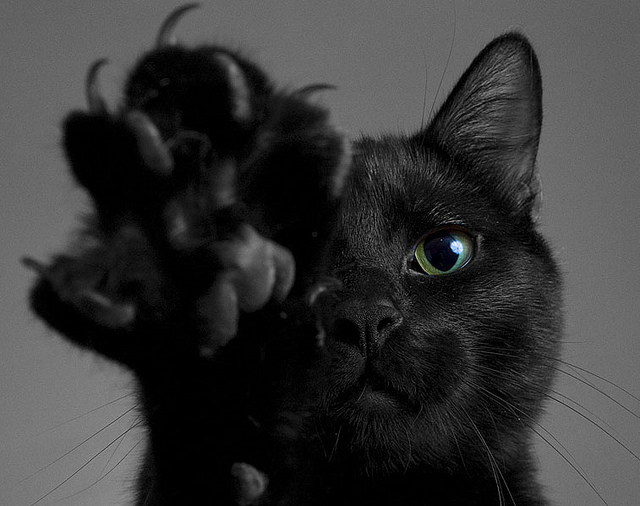 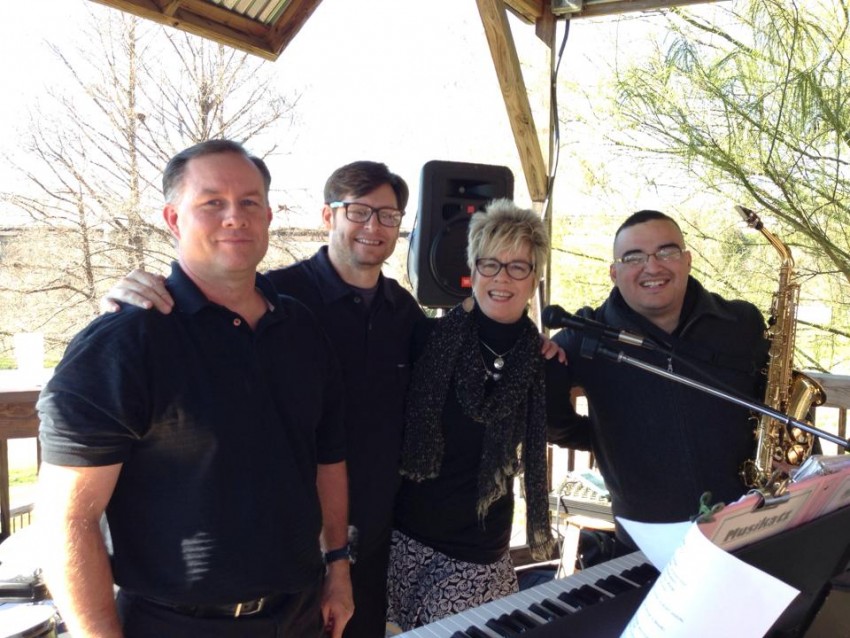 The Musikatz play with an emphasis on cool 60 and 70’s semi-acoustic jazz from Brazilian to classic west coast instrumentals. From outdoor events, parties, or weddings, to swinging clubs and eateries, we’ve been jazzin’ it, hot, cool, and smooth around Bastrop and Travis counties. We're available in quartet, and quintet configurations (usually we're a quartet). We're punctual, professional, and we love what we do; you will too!

The Bastrop Fine Arts Guild hired the Musikatz to perform at our annual fundraiser which is a Gala Garden Party.

They performed exceptionally well, and all of our guests loved the music.

The jazz was lively and kept people moving around the event, which is just what we were hoping for, so that they could see all of the art.

We confer with Central Texas clients as to their needs, draft an agreement and take a deposit (for private hire-refundable up to 2 weeks before gig; some exceptions may apply). We provide atmosphere or performance depending on the client's needs. Some special request songs can be learned (with adequate notice). The Musikatz add that "Sum is more than the parts" ambiance that only live music can provide. We're punctual, professional, presentable, and excited to make your event purr-fect. From ballads, Brazilian, light dance selections, to straight-up jazz, the Musikatz love to play!

Grace Garne
During her studies at the San Francisco Conservatory of Music, Grace discovered Motown and Hammond B-3 organs and defected to the SF music scene, sharing the stage, the bill, or playing as a side-man for Taj Mahal, Etta James, James Mason, the Jefferson Starship, and Bobby McFerron. From teenage recording sessions through stints with numerous Bay Area bands including; Shadowfax, her jazz trio ‘The Grace Notes’, and Wall Street, Grace also produced the acid jazz album: Object Lesson. She currently holds the keyboard chair with the Main Street American Big Band and the Austin-based Rhythm Inc. Band.

Juan Rangel
Juan recently graduated from Texas State University with a degree in Jazz Studies. After a stint with the Texas State Jazz Ensemble in Chile, he’s been gigging in the Austin/San Marcos area with a variety of groups including Mala Madre, Kabomba, Watts Brothers Band, Zombiefish, and is first tenor with the Main Street American Big Band.

As a small semi-acoustic act, we can provide sound coverage for up to 200 people. Larger events will accrue additional PA charges. A flat shaded space will be needed for outdoor events (shade coverage needs to be roughly 30' X30').

A Foggy Day
A Smooth One
A Night in Tunisia
After You’ve Gone
Ain’t no Sunshine
All of Me
All the Things You Are
Autumn Leaves
Black Orpheus
Blue Bossa
Blue Train
Blues in the Closet
Bock to Bock
Body ‘n’ Soul
Break Out the Blues
Bye Bye Blackbird
Jam
Comin’ Home Baby
Darn That Dream (t)
Do Nothing ‘Till U Hear From Me
Don’t Get Around Much
Doodlin’
Four
Georgia
Girl from Ipanema
Green Dolphin St.
How High the Moon
How Insensitive
I’ll Drink to That
The In Crowd
I’m Beginning 2 C the Lite
I’ve Got it Bad
Jersey Bounce
Just Friends
The Jody Grind
Killer Joe
Love walked In
Lullaby of Birdland
Linus and Lucy/Skating
Mercy, Mercy, Mercy
Misty
Moanin’
Night Train
The Odd Couple
Our Love is Here 2 Stay
Pennies from Heaven
Route 66
Samba De Orfeu
Song 4 my Father
Sissy Strut
Sister Sadie
St. Thomas
Strollin’
Take Five
Take the ‘A’ Train
Tenor Madness
There Will Never be Another U
Tuxedo Junction
Valdez in the Country
Wave
You Stepped Out of a Dream