The Magic of Robert Lane 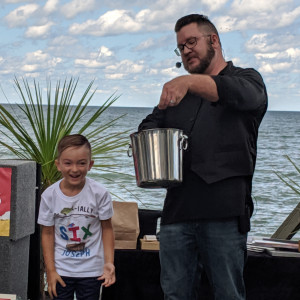 You can do anything if you know how. Thus Robert Lane leaves his audience inspired because they have witnessed the impossible. They realize that this is superb entertainment with science applied, and because he has studied and practiced he is able to show "miracles".

Robert Lane, Super Showmen who keeps his audience roaring with laughter. Always AHEAD OF THE TREND; the last word in refined entertainment!

With the wave of a wand you'll be Amazed, Amused and Astounded by Robert Lane.

Robert Lane's art is illusion, and he is a wizard of the present day who takes his art seriously-that is to say, he leaves nothing undone that would add to the excellence of his program. To call his performance another magic show would be a gross misstatement, for he believes that magic should charm and delight as well as mystify and bewilder.

An ardent interest in the history and practice of legerdemain from early boyhood has contributed to his versatility as an entertainer, and he is equally adept in the presentation of sleight-of-hand feats, pseudo-telepathic experiments, and stage illusions. Remaining constantly on the most mystifying and eye-defying effects in magic, he is presenting today the greatest and most entertaining show he has ever assembled. His "mysteries" will stimulate your imagination, create new mental impressions and fill your mind with wonders.