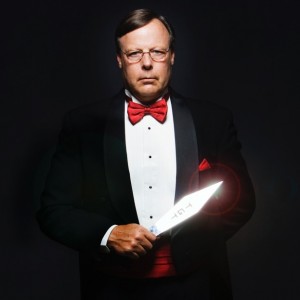 'World's Fastest, Most Accurate Knife Thrower,' in MAXIMUM RISK-The Impalement Arts with a Touch of Magic and Comedy. Knifes, axes, tomahawks and machetes thrown with lightning speed and surgical precision around his assistant. Straight-board act(18min) is intended for a captive audience. Approximately 8 stunts An audience volunteer is called up to help with a magic trick but duped into holding balloons, blind-folded, 2 blind-folded stunts. The act culminates with the stabbing of a signed playing card. Additionally he preformed the wheel of death and only knife thrower in the world to be preforming the Veiled Double Wheel of Death.