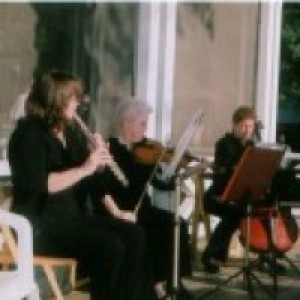 Wedding and event music provided for the Beaufort and the lowcountry of SC. The Bridge Trio provides chamber music for your special occasions in the Lowcountry of South Carolina including: weddings, cocktail hours, receptions, corporate events, anniversaries, private parties, concerts, and luncheons or dinners. The musicians are highly trained, college educated musicians with many years of performing experience in a variety of projects including bands, orchestras, chamber music, church music and music instruction. Our musicians understand how weddings work and have worked with many wedding planners in the area and know most of the venues around the Lowcountry.

Be the first to review The Bridge Trio

The Bridge Trio was formed in 2004 and has performed at numerous weddings, parties, and corporate events. Our individual biographies are listed below:

Olive Warrenfeltz (violinist) received her bachelor’s of music degree from Oberlin College. She taught string music in the Buffalo Public school system for 15 years. She moved to Columbia, SC and played with the Columbia Philharmonic Orchestra (now called the South Carolina Philharmonic). She then spent the next three years in Charlottesville, Virginia where she performed with the Lynchburg Orchestra. Since retiring to Beaufort, she has performed with the Hilton Head Symphony, the Beaufort Orchestra and with a variety of groups as a soloist and chamber music musician.

Arleen Melamed (cellist) received her undergraduate degree in music education at West Virginia University and has a Master of Arts in performance from Trenton State College.
She has performed in community symphony orchestras and chamber ensembles during her 35 years in the Philadelphia area before moving to the Lowcountry in 2004. She taught middle and high school strings and orchestra in public schools in Bucks County, Pennsylvania, as well as teaching Suzuki violin for more than 20 years. Presently, she is a member of the Beaufort Symphony Orchestra.