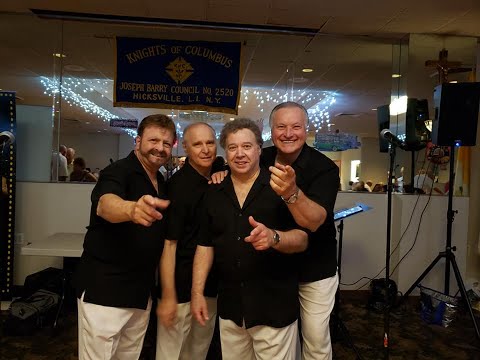 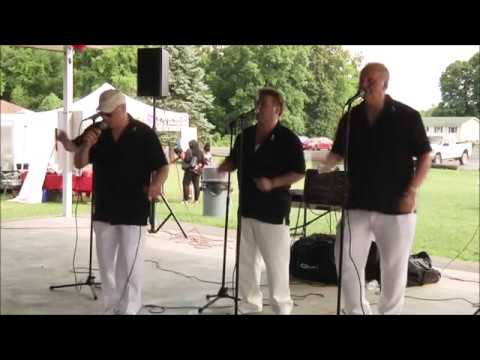 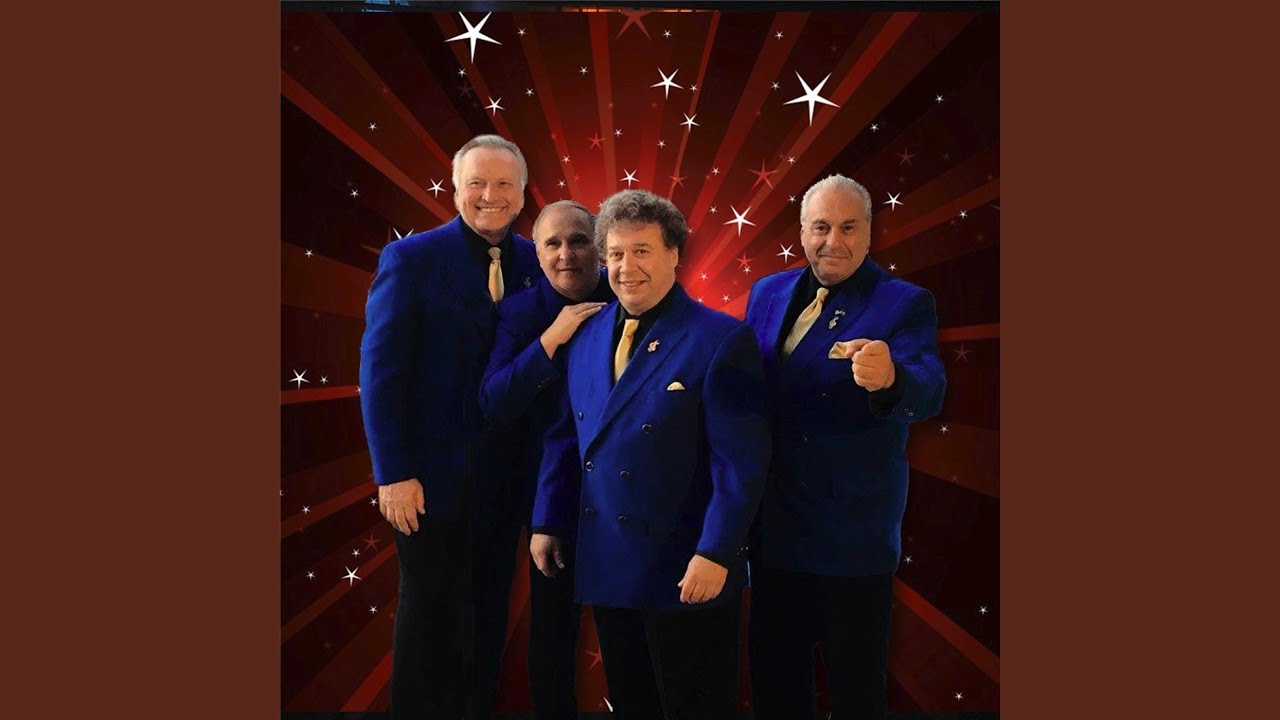 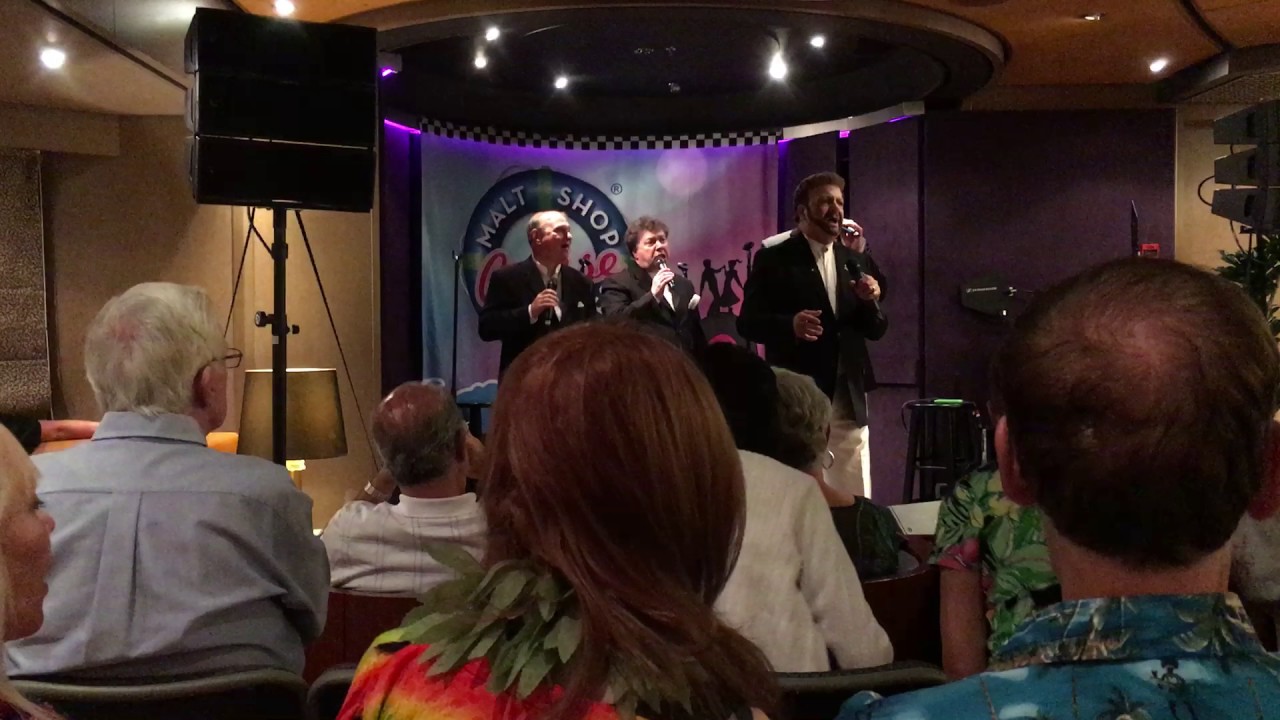 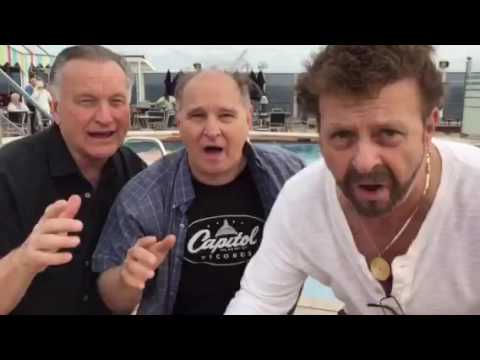 This I Swear
The Acchords 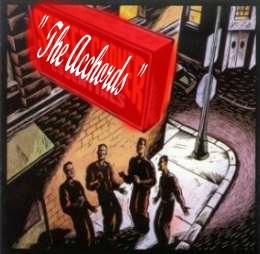 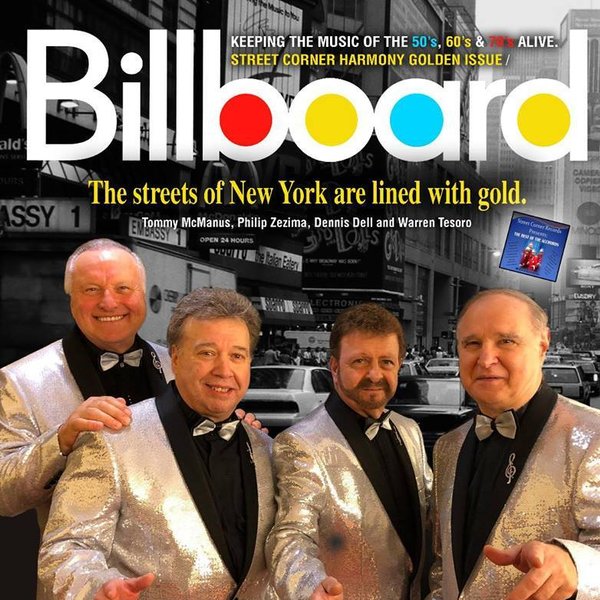 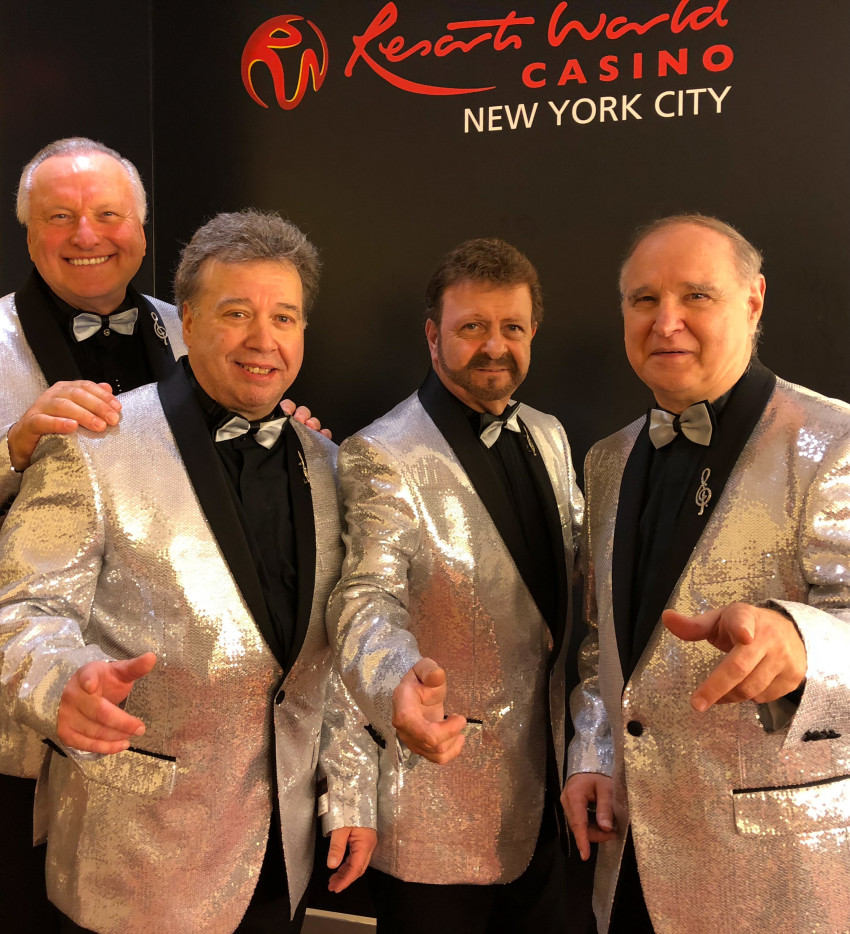 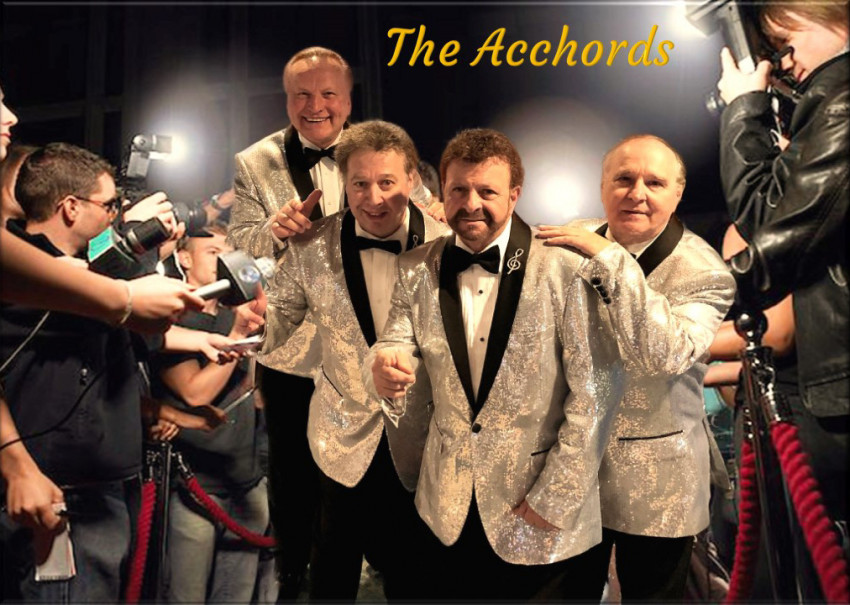 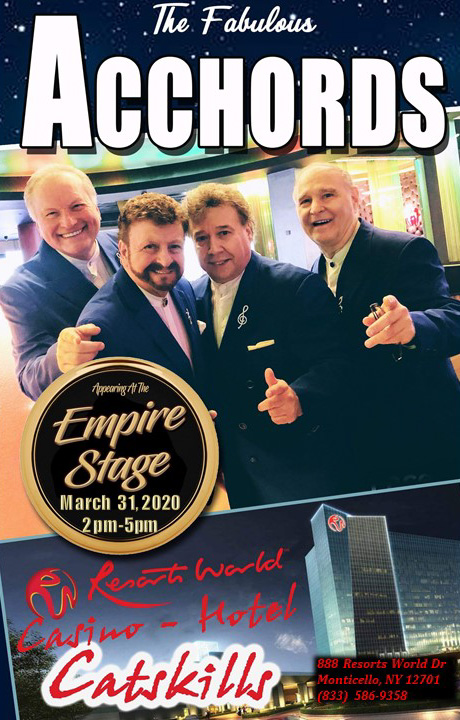 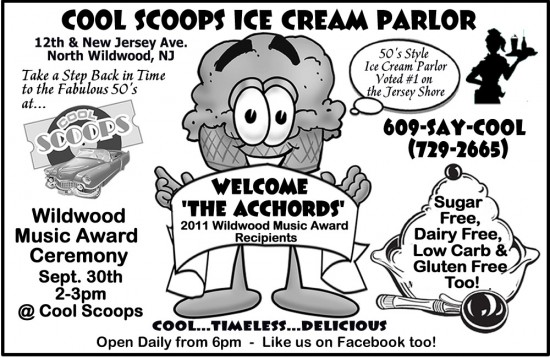 "The Acchords" are the #1 Oldies Group in the New York Metropolitan Area. Their performance of the 50's, 60's and 70'S Blockbuster Hits are electrifying that make the audience feel like their a part of the show. All their song selections pay tribute to the original artists

Recording Artists Tommy, Phil, Warren and Dennis have appeared with Rock and Roll mega stars such as: Dion, Aretha Franklin, The Dubs, The Dell-Vikings, Earl Lewis and the Channels, Johnny Maestro and The Brooklyn Bridge, Willy Winfield and the
Harptones, The Classics, The Mystics, The Passions, Buddy Holly's Original Crickets, Joey D and The Starlighters, The Duprees, The Shangri-Las, and a host of others.

Saw the Acchords for the 2nd time. They are definitly the greatest doo wop group ever. Their talent is incredible, closed my eye and felt like I was 17 again. They are as good as the original groups. Will see them again in August. Keep it going, we love the music.

Thank you so much Judy for the kind words. they are appreciated. The Acchords always strive to give the best performance possible. God Bless

The Acchords performed at our St. John the Baptist RC church, Italian Festival, in Allentown NJ. There performance had the crowd standing on their feet the entire night. They are truly over the top performers, don't hesitate to see there performance if they are ever in your area. Once again thank you Tommy and the rest of the group.

It was an honor and a pleasure to perform at St. John The Baptist in Allentown, NJ on September 16, 2017. The St John's Staff were exceptionally professional and courteous and provided us with extraordinary service to our every need. The folks at the affair were wonderful and we hope to make a return appearance very soon. God Bless

The Acchords are SECOND TO NONE

Went to Madigans-friday night with Corona group--Give yourself a treat and go see the acchords in person --then you will know first hand why they are the #1 oldies group.Best i have ever heard.

They performed for Father’s Day backyard BBQ party and were the perfect addition to our celebration! Amazing voices, professional and a pleasure to work with. It felt like we were at a live concert! Highly recommend!!!!

Thank you Jenn for the kind words. It was our pleasure in help making your event a great success. God Bless

Myself and friends saw the Acchords a few times. They are the greatest. Their appearance and their singing made a unforgettable time for us. I have seen many doo wop groups, but non like them. They sound exactly like them 50's and 60's groups. Keep the music coming and we will be there to support you. Thanks for the memories. Love u guys.

Thank you Judy for your kind words and support. They are very much appreciated and we will continue to keep the music alive. God Bless

I have seen this group perform on a number of occasions and I am consistently amazed at their ability to bring back memories the way I remember them. Their new relase " My Love Is True " is great. Don't miss this group. They are the best I have seen.

The Acchords were also the recipients of the 2011 Wildwood New Jersey Music Award for being the most original sounding group artists on the East Coast today for keeping the music of the 50s, 60s and 70s alive. After hearing them, now I know why. They sound just like the records I remember

I saw this group at Puglia's City Cafe in Garden City, NY. They were fantastic. All the songs they performed sounded just like the originals and most of the time even better than the originals. What a joy. My wife and I will be watching to see where their next appearance will be

These guys were fantastic. All their song selections sounded just like the originals. My Girl Friend and I thoroughly enjoyed this high energy vocal group. I have their website now and will be able to see them at different venues. Sinply stated, A Class Act.

These guys were fantastic. All their song selections sounded just like the originals. My Girl Friend and I thoroughly enjoyed this high energy vocal group. I have their website now and will be able to see them at different venues. Sinply stated, A Class Act.

I recently attended a fundraiser at Russo's on the Bay where the Acchords performed. Wow!!! These guys are fantastic and are sure to please every crowd. They sang classic oldies from the 50's/60's & tied in some really cool songs from other era's like Mony Mony by Billy Idol. I'm excited to see them again at one of the venues they play often.

I heard this group at my friends wedding and they are awesome! They really sound like the originals and thought they were the perfect balance with a DJ at a wedding. I got married a few years ago and wish I knew of them earlier. I loved them so much I brought my parents to the Inn at New Hyde Park last night and they couldn't believe how great they were. The lead singer did a version of Cara Mia that blew us away. He also did a tribute to Johnny Maestro which was very touching. I highly recommend you check them out.

These guys really hit the mark at Antonettes restaurant. Their renditions sound so much like the hits my wife & I remember. They have a great lead singer & terrific harmony. It was a show well worth it!

I had the pleasure of hearing The Acchords at a "DooWop under the Stars "concert and I was floored! They did their version of "I Believe" and I thought I was listening to The Earls.As a matter of fact, all their songs sounded like the originals. I don't remember the last time a heard a group as good as the Acchords! The guys were really into it and were having a great time! Love Em'!

This group performed at Antonette's Restaurant in Bellmore and let me tell you in one word " Fabulous". All the songs they perfomed sounded just like the orginials. These guys were fantastic. Not only do they make you feel like your their personal friends, but the night is simply total enjoyment. The Acchords are the best entertainment I have seen in a long time

I have never heard such a fantastic group. These guys sound exactly like the original songs that I remember. Thank God for the Acchords. Doo Wop lives forever

This group sounds just like the original recordings. It is amazing how fantastic this group emulates the orginal groups. They are the 2010 Sha Na Na

"The Acchords" are the #1 Oldies Group in the New York Metropolitan Area. Their performance of the 50's, 60's and 70'S Blockbuster Hits are electrifying that make the audience feel like their a part of the show. All their song selections pay tribute to the original artists and The Acchords loyal fans. Be sure you check out this fabulous group

If you are looking for New York's Top Oldies Group who emanate incredible smooth harmony then you have come to the right place. Recording Artists Tommy McManus, Phil Zezimz, Warren Tesoro and Dennis Dell are the vocal group sensation :
" The Acchords "

Tommy McManus, founder of the Acchords achieved celebrity status through The Joe Franklin and Jack Bilby Shows, hundreds of voice-over commercials and his momentous appearances at Westbury Music Fair. He is a charismatic foundation who brings sweet sounding harmony to life in each performance.

Dennis Dell is from the Bronx with an extraordinary and powerful vocal range that lends brightness to the group as first tenor. Dennis is a former member of The Mellow Kings and The Chimes

Warren Tesoro exudes versatility as referenced by his association with Norman Fox and The Rob Roys, The Larkings american Bandstand and with John Goodman on SNL

Tommy, Phil, Warren and Dennis have appeared with Rock and Roll mega stars such as: Aretha Franklin, The Dubs, The Dell-Vikings, Earl Lewis and the Channels, Johnny Maestro and The Brooklyn Bridge, Willy Winfield and the Harptones, The Solitaries, The Classics, The Mystics, The Passions, Buddy Holly's Original Crickets, Joey D and The Starlighters, The Duprees, The Emotions, The Shangri-Las, The Externals and a host of others.

The Acchords were the recipients of the 2011 Wildwood New Jersey Music Festival Award as the greatest and most original sounding group artists on the East Coast today for keeping the music of the 50s, 60s and 70s alive

Check out their new CDS " The Best of Times Volume I, II, and III " and also their original hit single " My Love is True" and "Please Say" which are now available on I-Tunes.

The Acchords can provide customized musical interludes between performances eliminating the need for the additional expense of a DJ.

" WE WILL BE YOUR PERSONAL DJ "

The Acchords also provide the necessary sound system contoured to your specific event, thus eliminating any extra cost of a sound engineer.

The Flamingos,, Larry Chance and The Earls, Duprees, Earl Lewis and The Channels, Paradons, Jive Five, Little Anthony and The Imperials, Danny and The Juniors, Four Seasons and many more of the greatest era of Rock n Roll have influenced The Acchords music