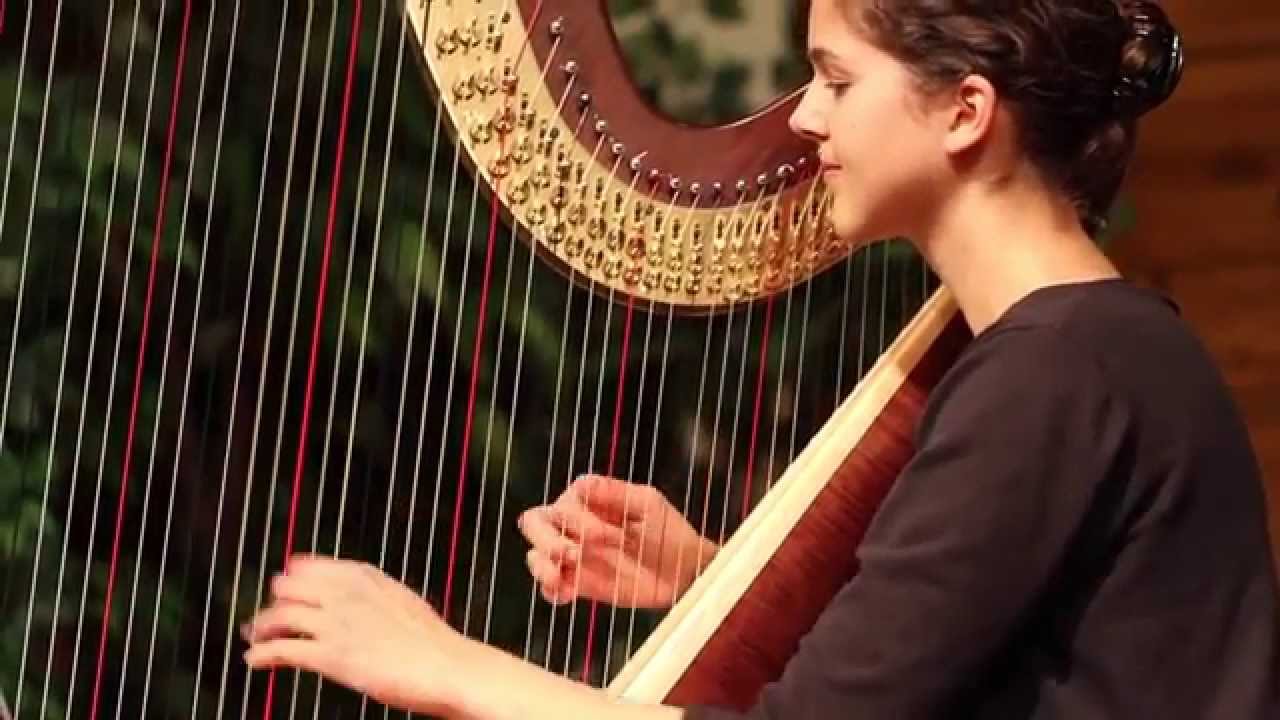 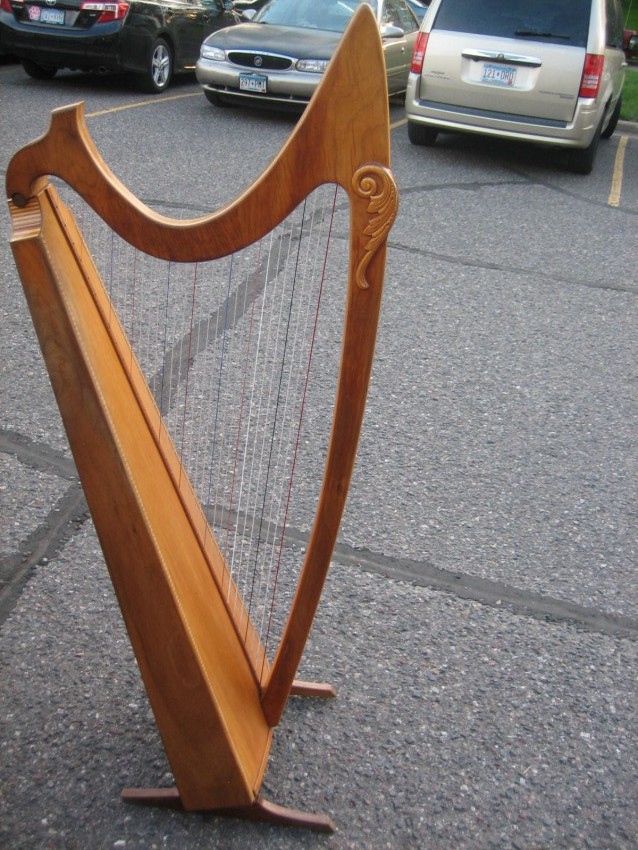 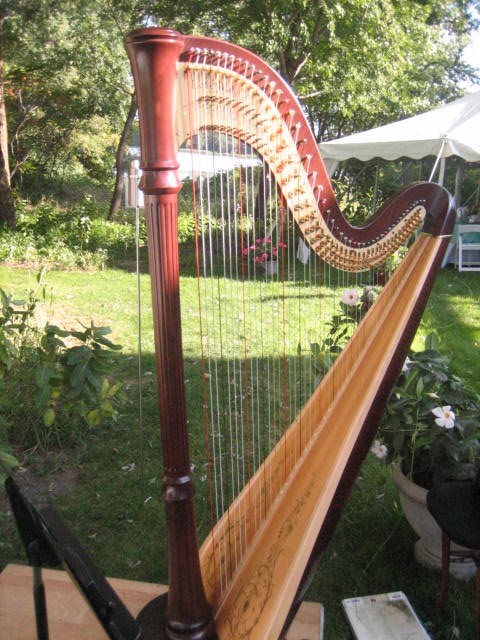 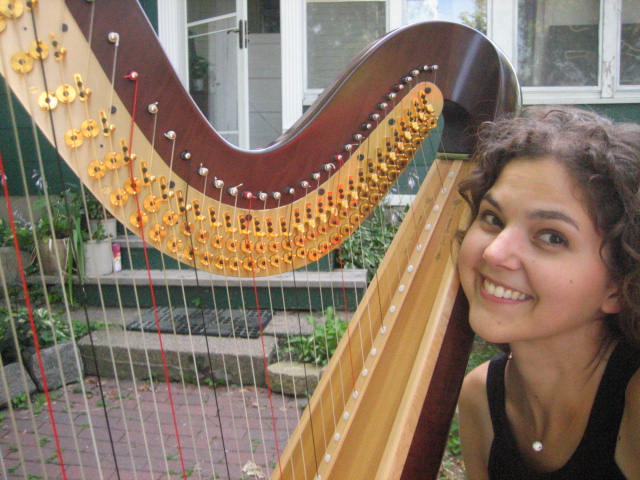 Stirring and sweet, Stephanie's harp playing sounds passionate and appears effortless. She has performed at weddings, parties, and special events in St. Paul and Minneapolis for the past 14 years. She has recorded harp albums and is working on a fifth. Stephanie studied harp performance under Kathy Kienzle (principle harpist of the Minnesota Orchestra) and specializes primarily in Renaissance and Celtic harp music. She also runs a private studio from her St. Paul home.

Stephanie is personable, professional and a beautifully skilled harpist. Her music provided a lovely atmosphere as people gathered, for the ceremony, and during the receiving line after the ceremony. Many people commented on how they enjoyed the harp music and how elegant and unique it was.

Made my wedding a dream!

Highly recommend! Stephanie could not have been easier to work with for my wedding. She responded quickly to all emails, accommodated every request, provided ideas and options for our ceremony, and is obviously extremely talented. She played beautifully before, during, and after our ceremony and made my wedding feel like a dream. She played both songs I requested (Clair de Lune & Somewhere Only We Know) and then incorporated happy Irish music for the rest of the time I had her. I'm so grateful I found Stephanie, I can't imagine a better harpist to work with!!!

Dear Kayleigh - Thanks for including me in your wedding and for the kind words!

Made our event even more memorable! Stephanie is a real professional. Beautifully talented!
Thank you Stephanie!

Thank you Ann! It was a pleasure to be part of your celebration.

We hired Stephanie for our wedding ceremony at The JX Event Venue in Stillwater. Having a harpist was one of the "must haves" that we wanted at our wedding, and we were so pleased that we chose Stephanie! She is incredibly talented, very easy to work with, and her music was exactly the classy, elegant touch that we had hoped for. We highly recommend Stephanie!

Thank you Vanessa! It was a pleasure to be part of your ceremony.

Stephanie provided beautiful harp music for our ceremony. We were very happy that we chose her to be a part of our big day!

Stephanie out did herself!! She is so talented, and has such a pleasant persona. She fit into our day so perfectly, and effortlessly (or so she made it look!) Highly recommended!!!

Stephanie is the best!

Stephanie did a fantastic job! All of our guests loved being able to watch her play during our ceremony. Having the harp music added so much to our wedding with very little effort or time required on our part. Stephanie was incredibly easy to work with.

We hired Stephanie to play during our wedding reception. We had her choose a prelude which was beautiful and asked her to learn 2 "pop" songs (one with a singer and one instrumentally). She did an amazing job. We had planned for Stephanie to rehearse the song with the singer the day of the wedding but she went above and beyond our expectations and arranged a rehearsal the day before just to be sure. Highly recommended. We would definitely hire Stephanie again.

Stephanie played the harp for before our wedding ceremony and during the ceremony. Everyone commented on how beautiful and relaxing the music she played was. Stephanie was very accommodating in meeting us, she even learned how to play two songs for our wedding! I highly recommend her to anyone.

Stephanie is a true artist. Her music is magical and heavenly. She helped us to achieve a feeling of ethereal bliss and joy at our wedding ceremony and I simply can not imagine it any other way.

Not only is Stephanie an artist, she is incredibly kind, passionate and professional. She gave my mother and I a private miniature concert pre-wedding to help narrow down the musical choices, and let me tell you--it was difficult deciding because she is so good!

Stephanie is also very affordable for what she is capable of. She is very talented and her rates can't be beat.

Through the phases of meeting her, deciding the music, and having her travel 120 miles by vehicle AND a 20 minute boat ride to join us on an island for our wedding ceremony, plus her post wedding thank you--it was effortless and complimentary. She is truly an exceptional addition to anyone's wedding day.

My husband and I were so impressed with Ms. Claussen's professionalism, both during the planning process, as well as during the ceremony. She was incredibly prompt when responding to questions or concerns. She went out of her way to ensure my husband and I were aware of all of our options for all parts of the ceremony. With her knowledge, suggestions, and patience, we were able to individualize our ceremony based on our preferences and it couldn't have been more beautiful. We received so many compliments from our guests. I would definitely recommend Ms. Claussen's services to anyone. We appreciate all of her help in making our wedding day everything we hoped it would be!

Stephanie was everything we could have hoped for - and more. She played for our wedding ceremony, and was so easy to work with. She had us over for a "mini concert", where she showed us what/how she played, and we were instantly in love. She could play anything, it seemed - we had a list of songs we wanted, and she nailed every single one of them!

On top of that, she looked beautiful at the wedding, and she arrived an hour early - it was obvious that she took this seriously, and yet she was so natural. All our guests keep asking us, "Who was that harpist??" Thank you Stephanie!!

I arrive a minimum of a half hour ahead of time to set up. I provide my own instrument, chair, stand, and amp (on request). If you have special requests for music let me know. Feel free to specify a genre of music you prefer, such as pop, classical, sacred, or folk.

Stephanie Claussen has been performing Renaissance and Celtic music for over fifteen years. She regularly gives concerts and performs at weddings, special events, and conferences throughout the Twin Cities. At the age of twelve, she won 1st place in the Macalester Scottish Harp Competition in St. Paul and was additionally named “Most Promising Harpist.” After studying harp for eleven years with Twin Cities harpist Cathy Victorsen, Stephanie received her BM in performance at the University of Minnesota under the instruction of Kathy Kienzle, principal harpist of the Minnesota Orchestra.

Claussen has performed harp as a member of numerous orchestras, smaller ensembles, and indie band “Acoustic Nerve.” She has made guest appearances with the Metropolitan Symphony Orchestra, the North Heights Chorale, the Greater Grand Forks Symphony Orchestra, and the Paris Conservatory’s Saxophone Ensemble. She and her violinist father performed as wandering minstrels at the Minnesota Renaissance Festival on and off for the past fifteen years. In 2014 Claussen was awarded a Minnesota State Arts Board Grant to give concerts and teach throughout Minnesota.

Stephanie is experienced at performing at all types of events. Her professional attitude makes working with her a pleasure. Her diverse repertoire encompasses classical, folk, pop, sacred and Early music.

I am happy to play for outdoor weddings if there is either an alternate location in case of rain or a tent that is set up, and nearby, if it looks like it might rain. (No tent necessary in beautiful weather).

I own and perform with two different harps - a 6-foot Concert Grand Pedal Harp (mahogany) and a 5-foot Gothic harp. Depending on what type of music you prefer I will recommend one or the other.

I will take a 10-minute break for every hour of background music I play.

I've spent a great deal of my twenty years as a harpist playing Scottish and Irish music. Harpists like Sue Richards, Sunita Stanislow, and Kim Robertson have shaped what feels 'right' in my hands as well as my arrangements, and my years studying under both Cathy Victorsen, noted Twin Cities harpist, and Kathy Kienzle, principal harpist of the MN Orchestra, have helped me develop my technique and musicality.

I need a flat space at least 6x6 feet square.