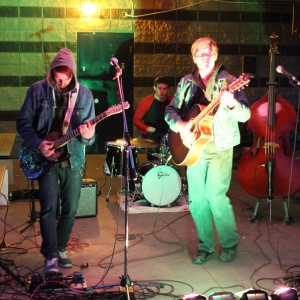 Formed in April of 2012, where they jammed for the first time in grade 10, Southern Streets combines the best of rock, blues, alternative, and folk music. The band features guitarist Sean Peacock, guitarist/drummer Stephen Badry, and vocalist/bassist Conor McIntyre, but that doesn’t keep these musicians from pulling out more instruments and switching it up. But their music isn't all they bring to the stage. This band is made up of true performers and entertainers. Southern Streets bring a very well defined vibe and groove when they preform. With a repertoire stretching from Jack Johnson to The Stray Cats to the Arctic Monkeys, Southern Streets is sure to match any style or atmosphere you mig

Be the first to review Southern Streets

We are a rather versatile band in the sense that we can set up just about anywhere. Our setup consists of a double bass (yes, the one that looks like a cello), 2 guitars, 3 mics, and sometimes a drum kit hooked up to a 600 watt portable PA system. We usually interlace our music with occasional comedic bits and audience engagement. You can expect a medium energy performance from our style of music and comedy that is sure to engage your audience. Our usual performance space is coffee houses/restaurants and small to medium theatre venues.