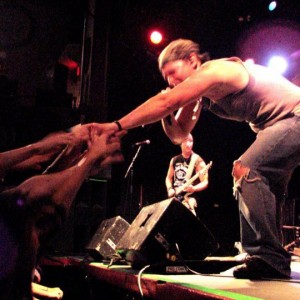 Silver Spade is a high energy hard rock band from the Hudson Valley, NY founded in 2002. The band has experience playing many types of gigs. We have shared the stage with numerous national acts, and have been featured at events such as the Warrior Dash. Depending on what you are looking for, we can play all originals, all covers, or both.

Be the first to review Silver Spade

Ever wonder what modern hard rock music would sound like without the screaming and whining? Ever yearn for a balls-to-the-wall, straight-up, in-your-face hard rock act with high energy and musical chops to boot? These guys did, and that's why they took on the job themselves.
Silver Spade's blend of chops and stage presence is something to behold at a live show, and is something that fans of rock and metal have not seen in decades.
On October 30, 2009, Silver Spade released a self-produced full length album entitled "From the Ashes," and are currently in the process of producing a new full length album. The band's influences and cover repertoire include Iron Maiden, Guns n Roses, Queensryche, Disturbed, Avenged Sevenfold, 70s rock, 80s hair metal, 90s grunge, and modern rock.