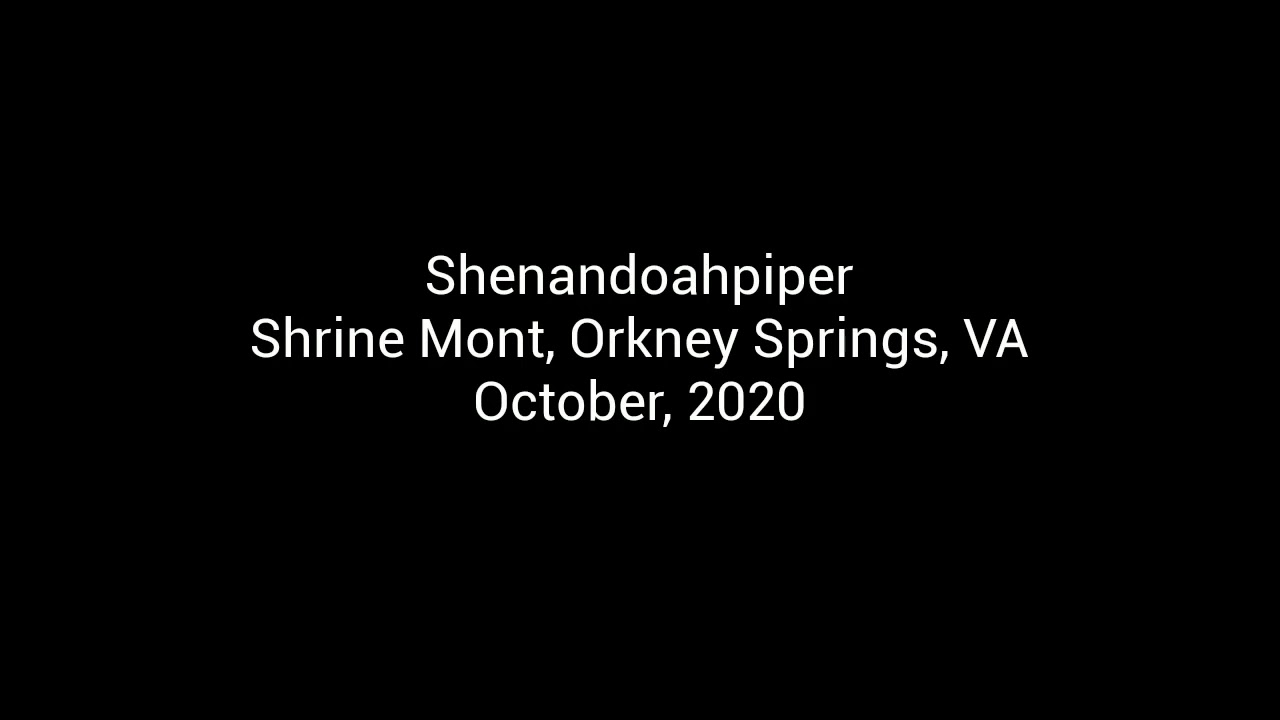 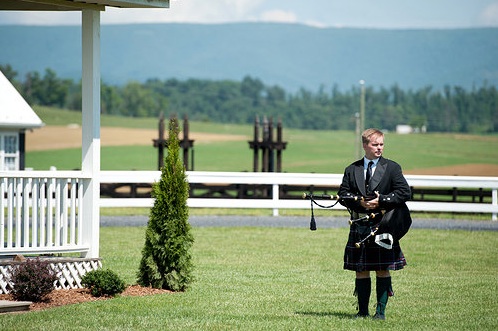 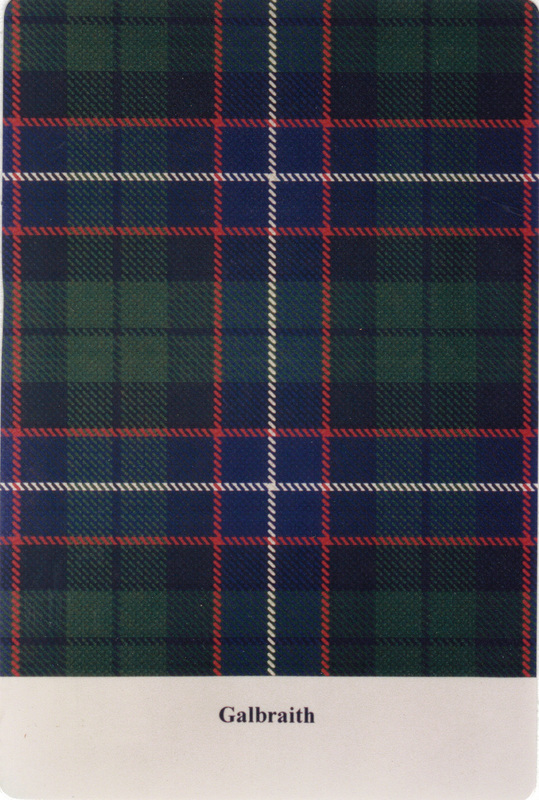 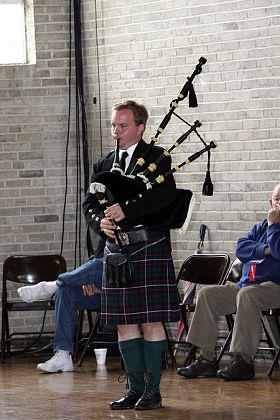 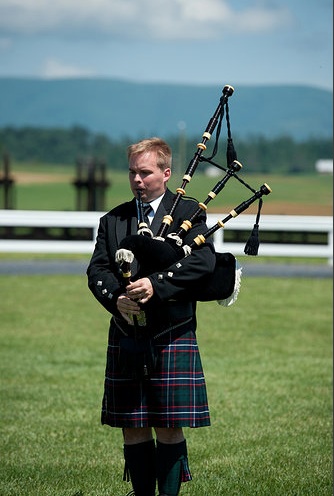 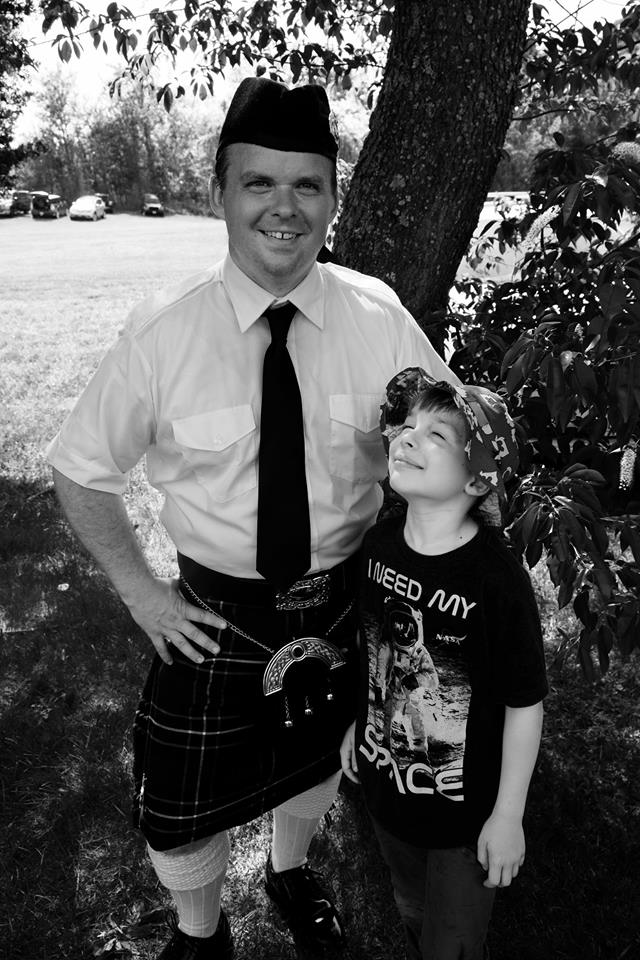 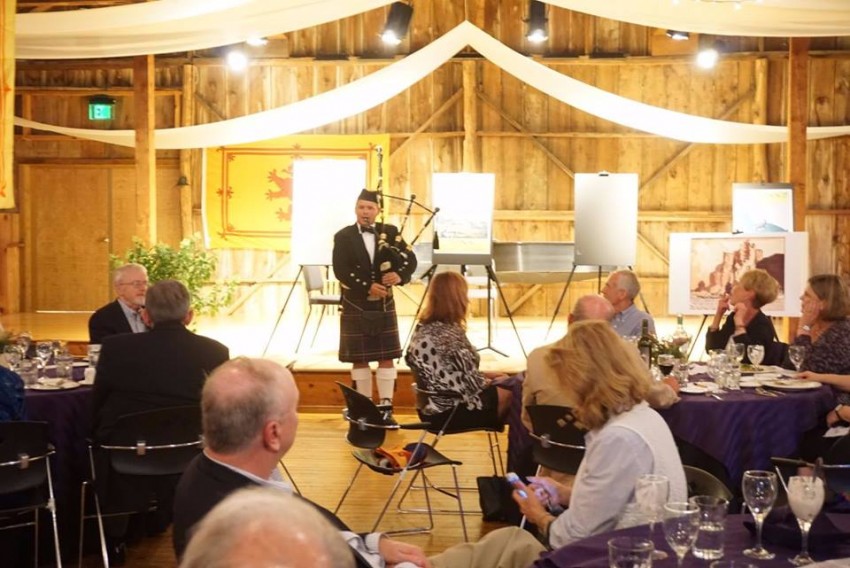 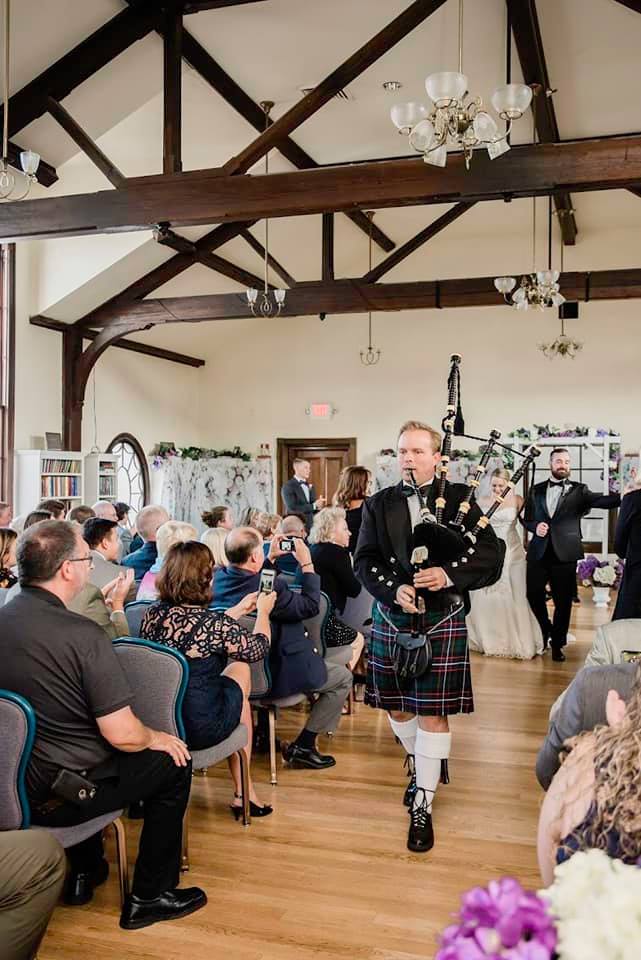 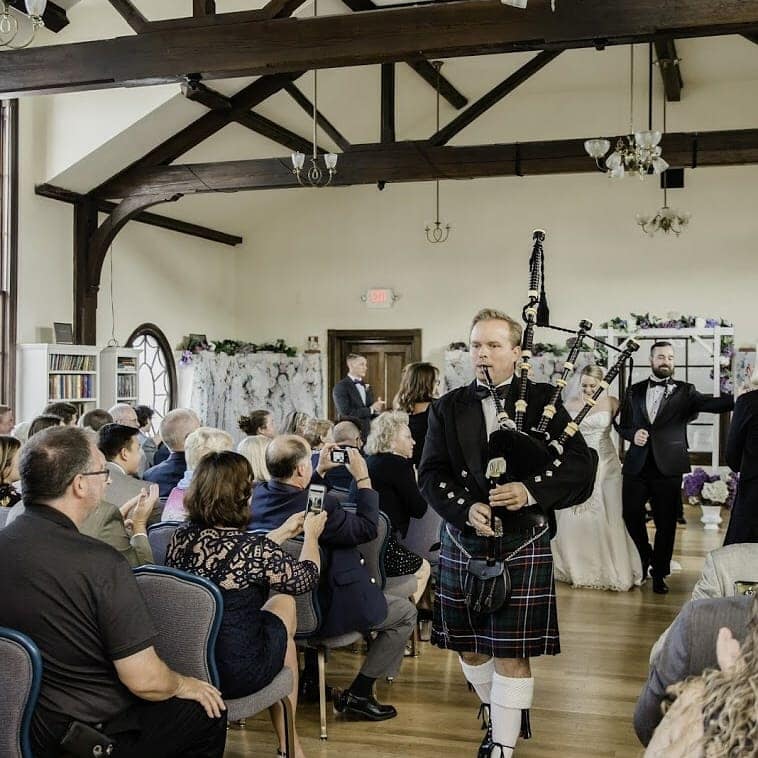 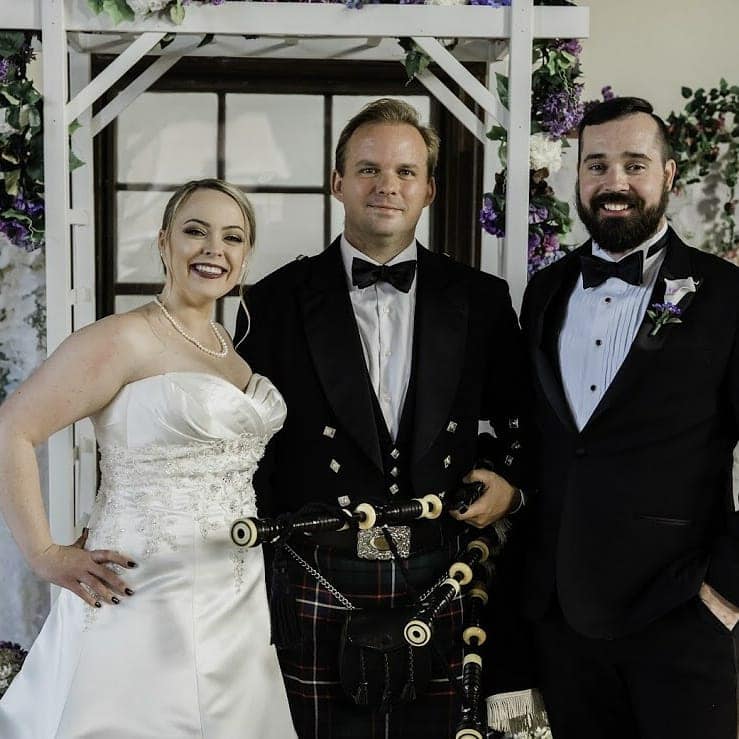 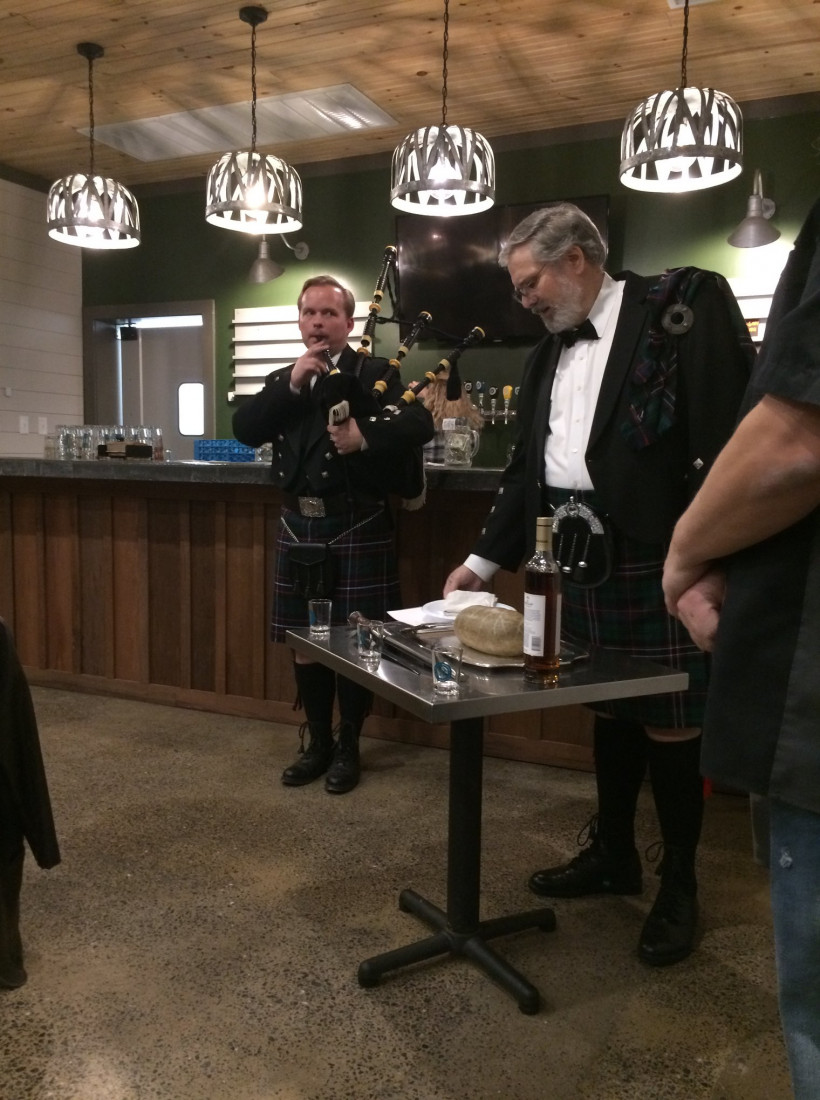 Having played the Highland Bagpipes for twenty years in numerous settings, I know how powerful their music can be for any of life's most important moments. Bagpipes have been used as a traditional musical accompaniment in life's transitions for centuries. Whether marching an army into battle, a couple down an aisle, ushering a soul into the next world, or any other of life's transitions, the pipes never cease to add a powerful and emotional musical element to any occasion.

Let me work with you to plan a powerful event. I play both the Highland Bagpipe and Scottish Smallpipes, the latter of which is excellent for small indoor settings and also blends well with other musicians.

Our family's experience working with Russ to provide music for a graveside service could not have been better. He was professional, timely with communication, accommodating of our musical requests, and readily adapted to outdoor performance conditions of the day. We recommend him without reservation. Additionally, the gig salad site was also quite user friendly.

Could I give more than 5 stars? So nice, professional, punctual, well dressed, and an AMAZING piper. He made the day!!!! My intended cried. Need I say more. Skip the rest and pick the best. 😊 i don’t have any photos of him yet, but he was perfectly dressed for our wedding.

Thanks for the great review, but even more thanks for the honor of being a part of your wedding. What a fabulous couple! Your words are so kind and I really appreciate you putting your faith in me. It was fun keeping this a secret.

My best to you both as you navigate life together! If you do have photos you are willing to share, please do!

You can reach me at kohrsrh@gmail.com. If you need a piper in the future, you can find me here or there!

Great job! I was well pleased

I had a very good experience from start to finish.
Russ arrived on time and played beautifully. He interacted with various people at the event and was well received. I received many compliments on Russ’s playing.

Thank you kindly, Karen! I enjoyed myself, even saw some old acquaintances. It was a really lovely, moving service.

Russ was a delight to work with and was in close communication throughout the planning process to ensure all went smoothly. He helped in surprising some friends on their elopement, and they were so happy to have him there. Would absolutely recommend Russ for anyone looking for a piper in the Shenandoah area!

Thank you, Amanda! It was a pleasure working with you and the entire party!

Able to work with a moving target

Russ was most helpful with a short notice funeral at an outdoor chapel. He was flexible as the family worked with travel from the Pacific, a hurricane and other variables. His music and suggestions were terrific and patient. Very personable and professional. Thanks.

Russ was perfect for our event. Absolutely recommend him.

Thank you, Avery! It was such a pleasure to spend those important moments with your family.

We had our event at an isolated private cabin in the middle of winter. As the event start time got closer we drove out to meet our guests and found Russ trudging in his kilt in the snow as someone had locked the gate to the community. Since there was no cell service, he was so determined to make the event he faced the treacherous wilderness of West Virginia mountains in wintery down pour in full highland attire to make sure he was there on time.

When we finally got everything set up, he offered some great advice to the event and felt like a family member we’d known for years. Russ’s bagpipe skills were all we’d hope for and more, but it was his personality and eagerness to make our event perfect where he truly shined. As a musician myself there are certain qualities I look for when hiring performers and Russ passes every test with flying colors.

Thank you for the awesome review. I don't get to stroll in the woods very often in my kilt, so it was refreshing!

Thank you for including me so generously in your intimate family Burns celebration. You are all wonderful people and it was a real pleasure to spend time with all of you.

Russ was hired to be a featured instrumentalist for two of the songs for our major production that we repeated 6 times over 2 days for thousands of people as well as live online broadcast. He was very responsive to messages and direction, extremely positive, professional, and showed up early and well prepared for rehearsals and the productions. We would highly recommend him!!

I had so much fun playing with such an awesome band full of fabulous people. This was one memorable event and, I hope, there will be an opportunity for me to play with you all again in the future. I really appreciated the opportunity to highlight and play the Scottish Smallpipes, rather than the Highland Bagpipe, and the opportunity to really dive into a set of music that was different from what I usually play in two ways, in that it wasn't originally written for the bagpipe, requiring interpretation, and that it provided an opportunity to play in support of the melody, rather than my part being the melodic focus itself.

Most valuable to me was the chance to spend time with all of you in such a joyful celebration of Christ's birth!

Thank you for the opportunity to serve Christ in this way and "The Mount" as a part of the team,

An nth hour decision, I sought a bagpiper for the 50th anniversary of our County's volunteer rescue squad awards dinner. While all other event details were in place, finding a piper within a reasonable distance, during the busy holiday season, seemed an impossible task. After literally stumbling upon GigSalad, Shenandoah Piper appeared and our dialogue began. In short order, we set on date, time, fee and a rough outline of the evening's program and where he would interject his piping magic.

The relationship between bagpipes (which are Scottish, not Irish) and first responders began well over 100 years ago. While Irish immigrants were "not good enough" for traditional business work they were welcome to sign up for the dangerous jobs of police and fire, which no one wanted. And, sign up they did. They also died in those jobs, bringing their funeral rituals to a very scrappy America - including the playing of the pipes for their fallen. What could be more traditional or significant to celebrate the roots of rescue in the US, let alone our teeny-tiny county?

Dressed in his kilt, Russ brought fine musicianship and suggested appropriate tunes for the different points of our event. His playing caused us to pause and remember, to give thanks, and carry on. He piped the guests into the venue, calling the event to begin, and later, played Amazing Grace perfectly after the moment of silence for those in our corps who gave the ultimate sacrifice. I can say there was not a dry eye in the room.

Shenandoah Piper brought warmth and professionalism to our gig. I found him affable, approachable, flexible (thank goodness, for some of the event changed course a bit and he rolled with it, beautifully). He was cordial to our guests and we could not have had a better experience or musician.

Just wish I had more opportunities to hire him! I have shared his information with many since our party and will continue to sing his praises. Thank you, Russ! Continued success to you!

Thank you, Jennifer, for your very kind words! It was a pleasure to serve you and the EMS company on its anniversary and I was glad to make it possible for me to be there.

Have a Merry Christmas and I pray that both you and the county EMS have a wonderful new year. Congratulations on five decades of service!

Everything we hoped for!

He played As a surprise for a church service. It was great, he touched base with me prior to the event, was very punctual and performed amazing. Highly recommended.

Thanks, Ken! It was great fun and I could tell that the congregation appreciated the music. I know that the folks I spoke with afterward really thought it was great - and commented on how well you put services together regularly. Thanks for the opportunity to play for the service and for thanks for your Christian leadership!

Russ showed up early, was professional, easy to work with and customer friendly. He was a great addition to our daughter’s wedding ceremony. We could not be more pleased. Such talent. Thank you Russ for making our day even more special.

Thanks for hiring me for your wedding. I had a great time with great people. Congratulations on your daughter's wedding and I pray for them to have years of joy together.

I hope to have a chance to work with you again,

Russ was easy to work with in helping plan the funeral service and was a touching addition to our mother in law’s funeral. That Scottish lassie would have been smiling.

Hi Nell!
Thank you for the opportunity to be a part of making her last rites meaningful. It was a joy to meet your family and an honor to serve all of you in this capacity.

I appreciate the very positive review!

For most any event where a bagpiper is required, the public expects to see the piper properly arrayed in kilt and associated attire. I will not disappoint. I wear the Galbraith Clan tartan and can dress formally for weddings or less formally for other events where a shirt and tie might not be preferred.

I have 20 years of experience on the bagpipes. Those years include playing with the North Coast Pipe Band, the College of Wooster's "Scot Pipers", and numerous solo gigs such as weddings, funerals/graveside services, fundraisers, parties, university commencement ceremonies, and much more.

I am also able to provide music for events that might require a quieter touch through the playing of Scottish Smallpipes set in the keys of A and D. Just let me know what you desire and I will work with you to make it happen. 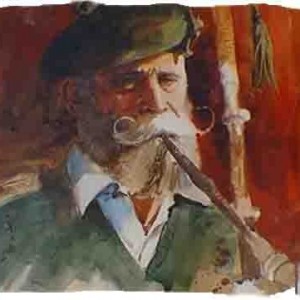 Ryan C. said “Honestly, I cannot imagine how this could have gone better. I'm not even sure where to begin. Not only did J.R. work with me on song selection, which…” 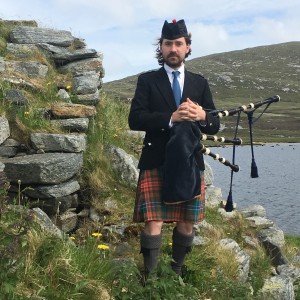 Mariluz said “We're very pleased by Duncan's performance. He is very professional, he was on-time, and the music was perfect for the occasion. We would hire…” 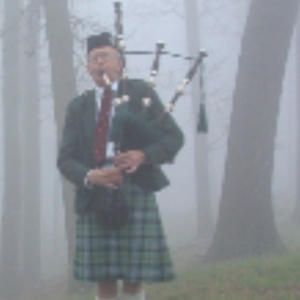 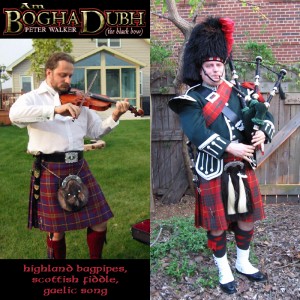 John C. said “Peter was great. His professionalism and demeanor were dignified and honorable. I’d recommend him to anyone looking for a bagpiper.”