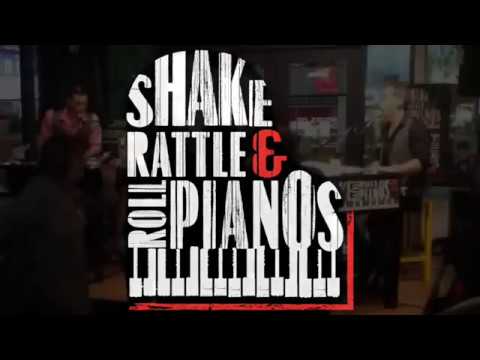 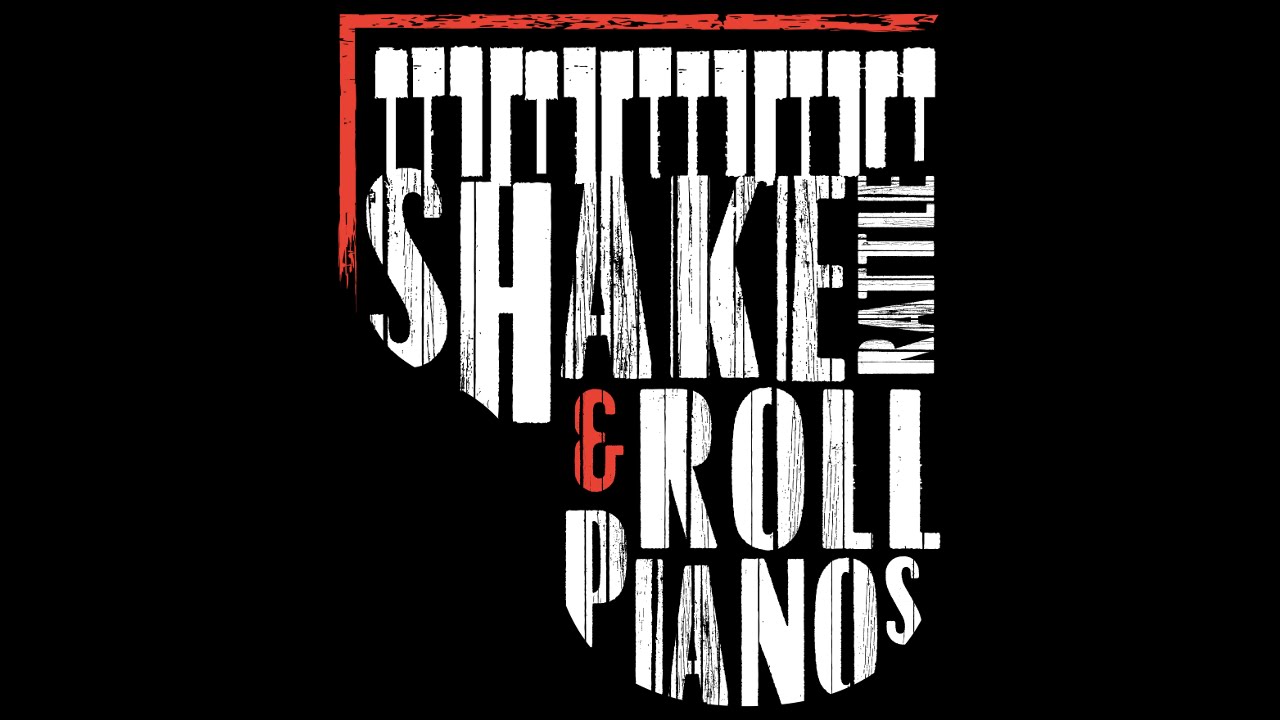 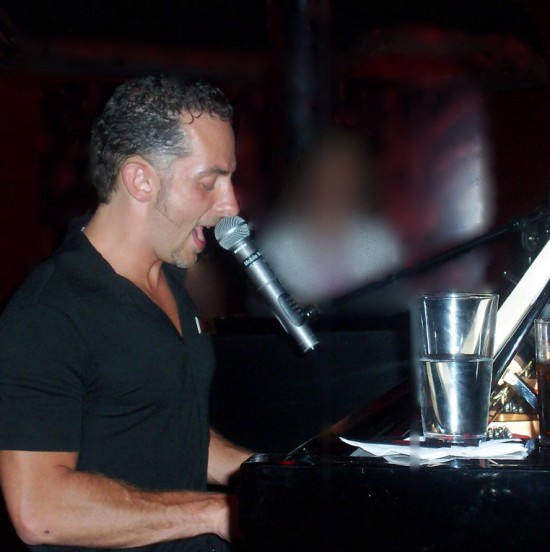 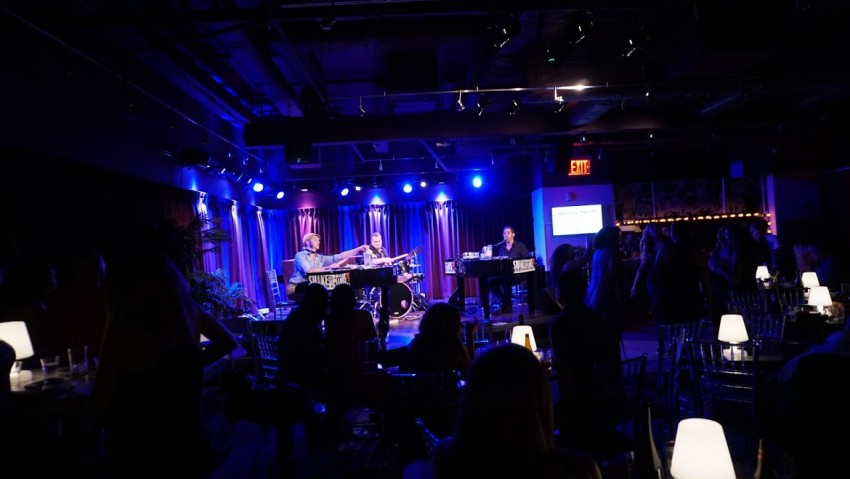 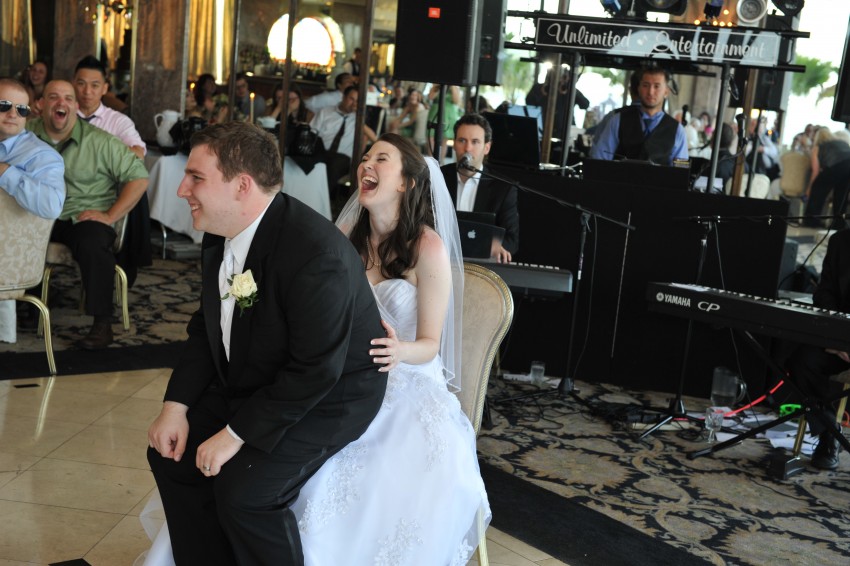 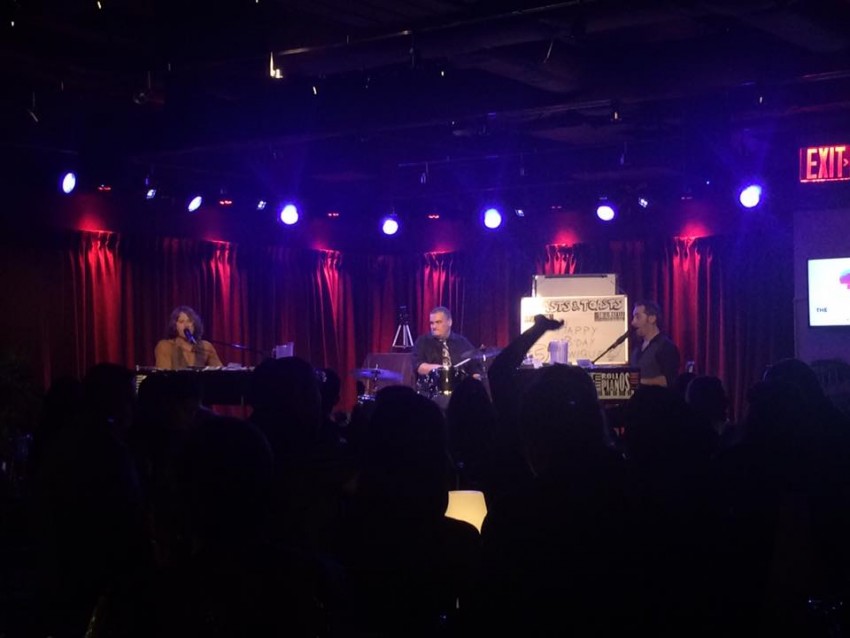 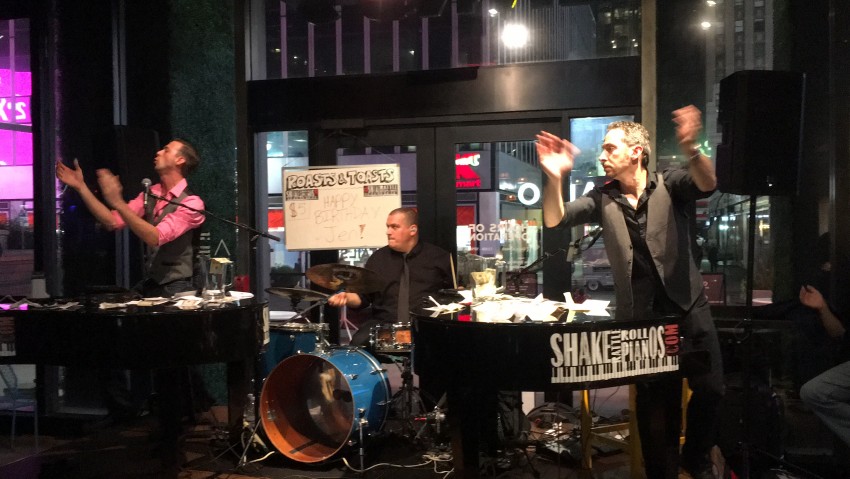 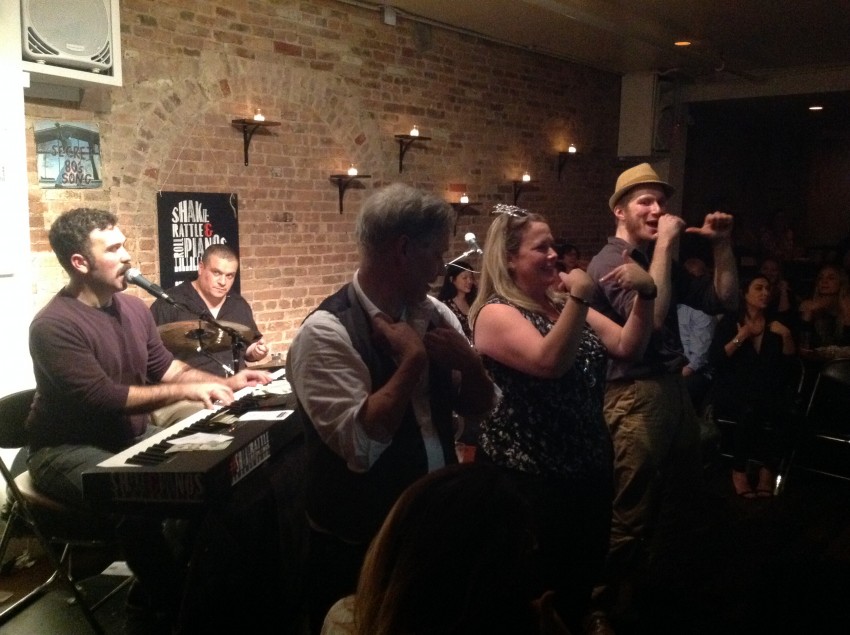 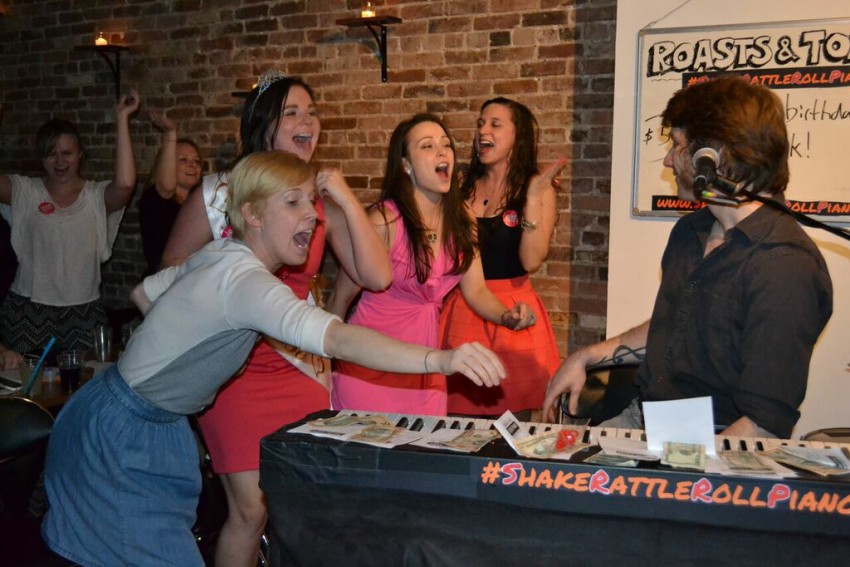 The largest Dueling Pianos company in the Northeast USA - over 500 events per year! Come see why we're chosen more often than All Other companies Combined!

"Keyboard master Mark Weiser takes audience requests, mines his vast knowledge of catchy tunes and busts out singable tracks." - Time Out New York.
"It's song vs. song at these raucous sing-alongs...a musical free for all!" - Newsday.

Our experience was top notch from start to finish. Mark was extremely responsive and Matthew Friedman was amazing. It was like having Billy Joel perform live in our living room. Everyone had a great time. Best 50th Birthday party ever. Thank you Mark and Matthew!

Thanks Miriam! Looking forward to entertaining you again!

Shake Rattle and Roll sent exactly what I was looking for, Brian Nash. He was so talented, friendly and fun with a magnificent voice! I rarely write reviews but we were all so blown away that I felt I must!

THANK YOU VICTORIA! We're big BRIAN FANS too! We look forward to entertaining you again soon!

SRRP did an awesome job engaging customers and helped create a great atmosphere which encouraged all guest to participate. Definitely recommend them as great entertainment for any event!

Thanks Chris! We're looking forward to a GREAT season at Oculus!

Matthew was great. Courteous, very flexible with the audience. Nice voice and good balance with the volumes. He also has a huge repertoire. We will book him again.

Thanks Sue! We loved being a part of Ladies' Night! We're looking forward to doing it again!

Eric is a wonderful entertainer, sung Glenn Miller and more, and was super nice.

We would have liked better communication before the event, suspect that was more the booking agent than Eric.

Would definitely hire him again.

Mark was great. Really responsive and Eugene the guitarist was amazing; he learned a song for us and had a great voice. Would book them again

Thanks James! And congratulations on a lovely & romantic proposal with your future bride! (We also do weddings!)

A night to never forget.

Brian and Matt were awesome! Such a great party. Great music and entertainment. They had everyone up and dancing. So glad I decided on dueling pianos for my husband’s surprise party. The guest loved it and everyone had so much fun!

Thank you Kim! It's reviews like this one that remind us why we do this in the first place! We look forward to entertaining you again soon!

Thanks Claire! We're glad the party went well. Greg told us you guys were a blast! We look forward to entertaining you again soon!

Shake Rattle & Roll put on an amazing event for our company kickoff party. They got everyone engaged, sang every song requested, and it was a great time had by all. I would highly recommend this company no matter where you are in the United States.

Thanks Brian!
We loved playing your party! We look forward to many celebrations to come!

Thank you for your great service and great music! Having live music at our event definitely added to the excitement!

We hired Shake Rattle & Roll for our wedding after party. Mark had been trying to nail us down, but we had some issues with the venue and finally, 2 weeks before the wedding, we were able to score a spot in the venue to make this happen. They were able to get me what I wanted in a short period of time. Both players came on time and prepared for a post wedding crowd. They were awesome. Allowed my guests to sing along on the mic and played whatever was requested. Everyone said this was a perfect post game for a wedding and they all raved about how much fun it was. Thanks to all involved. Stacey Kolmer-9/8/18

They were on time and were easygoing and great!
Everyone is talking about our party and it’s because to them!!!

Thank you Miri!! We look forward to entertaining you again soon!

Our audience had a fun time. You should hire these guys for your event!

Mark got.my entertainment and it all worked out great
No problems

Thank you so much for having us perform at your party, Jill! We're so glad it was a success, and we look forward to entertaining you again soon!

Wow!!! He brought the rehearsal dinner to life!!

I hired Mark to play at my sister's rehearsal dinner. The owner of the restaurant said that he has never seen so many people dancing at a rehearsal dinner, let alone the crowd that gathered on the streets of NYC to watch the fun!! Mark was worth every penny and I can't wait until we can use him at our next special event.

Marc got to event early and was all setup when the guests started to arrive. It was an office opening party and Marc was great. He catered to everyone's song requests. Trips down memory lane for many and a great time for all! Highly recommend. :)

I know there a quote above from me, but I had to write a review also. There was no option to pick for what part of my wedding Mark played for. He played at the after party for us. He did a dueling piano show. He was fantastic. I have guests asking where they can see him play and if he could play for them. Mark is extremely talented and I thought this after party just showcased his many talents. He made sure everything was set up and ready to go for the after party and he even had time to spend at my wedding with me. Although he was coming off of a VERY busy Saturday he was friendly and cheerful and full of life (as Mark usually is) for the after party. He made everyone feel so special by playing their song that they requested and he kept the crowd constantly laughing. The party started at 11pm and went until 2am and would have kept going if I hadn’t ended it! I would recommend him to anyone!! I really wish my wedding didn’t have to end, but it did and people are still talking about “Mark’s show” aka my after party.

I hired Mark to come by our apartment and play a medley of songs for my wifeon our anniversary. Given's Mark extensive repertoire of songs, the medely stretched across various genres of music which was perfect for the evening.

Mark is extremely professional in all areas. He was quick and timely with his communication. Responsive in providing recommendations. On the day of the event, Mark showed up early to make sure everything was set up and ready to go for the surprise.

Overall a fantastic experience. Would highly recommend his services. He's a true professional in every sense.

Mark made our party so much fun! His variety of music was astounding, and not only is he a talented performer, but he is funny too! He was a total professional, and saw to all the musical needs for our party. We will definitely call him the next time we have an event.

"Keyboard master Mark Weiser takes audience requests, mines his vast knowledge of catchy tunes and busts out singable tracks." - Time Out New York.
"It's song vs. song at these raucous sing-alongs...a musical free for all!" - Newsday.

From FOX TV's "Don't Forget The Lyrics", where he remains the all-time champion, Mark Weiser brings the PARTY to every performance! With over 20 years as a performer, your event is in Great hands!

Mark has been entertainment director of NYC's Sweet Caroline's Dueling Piano Bar, entertaining full houses in the heart of Times Square every single week, from 2007 until it's close in fall 2010. He has also appeared at Howl At The Moon, Keys To The City, Harrah's Las Vegas, Turning Stone Casino and many other venues, both locally and nationally.

Equally entertaining as a solo act, or as a dueling piano show, with one of the Many talented piano entertainers in our stable of artists, Every event is a party waiting to happen!

And, we work with a team of the Best piano players in the country. If Mark is unavailable for your event, rest assured that one of his Phenomenal colleagues is ready, willing and able to provide the very best in entertainment! For every kind of music or event, there's a performer Just Right For You!

We bring everything with us - pianos, sound, drums if desired...

Show us where to plug in, and we're off!

We play Thousands of songs, from every genre, decade and style!
With wifi, it's Tens Of Thousands!

piano/keyboard, mic (for vocal performances), speaker (for keyboard or mic)