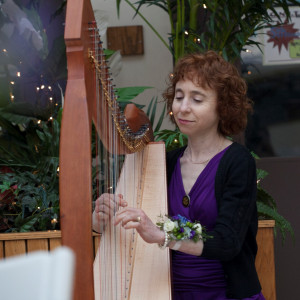 Sabrina Falls is a professional harpist who plays for weddings, special events and funerals throughout Indianapolis and central Indiana. She is also a Certified Music Practitioner, trained to provide live therapeutic music at the bedside of people in hospitals, hospices, other health care facilities, and private homes.

She makes beautiful music and was such a pleasure to meet in person. She has an easy going personality and is very talented. We enjoyed a private concert at home during the holidays and it will truly be remembered as one of my most favorite Christmas get togethers. She also was able to take a few requests from her album. Simply Wonderful. Highly recommend!

Thank you so much, Rachel. It was truly a joy and delight to meet you and your lovely family, and I am grateful for the opportunity to provide music for such a special occasion!

Sabrina played her Celtic harp for a small Christmas gathering. It was just perfect, soothing and beautiful songs. Each song seemed more magical than the last. She was very easy to work with and responded quickly to communication. We would love to see her play again sometime.

It was truly a joy for me to have that special time with your family. Thank you so much for the opportunity and for your kindness!

Hired Sabrina to play at a holiday luncheon and her music added such a beautiful, ethereal touch to our gathering. She was a joy to work with as well.

Thank you so much, Carol. It was a delight to provide music for this special event and hope to be able to do so for you again in the future!

Beautiful Harp Music and Professional to Work With

We contacted Sabrina after we had to change our wedding plans due to COVID. We scaled down our wedding and opted for an intimate outdoor ceremony in the woods with around 20 people and wanted the touch of live music during the ceremony. Sabrina was so nice to work with! She is extremely skilled and professional. She was able to play all the songs we wanted, one of which came from a YouTube video, and each song was so beautifully played. Since the wedding was so small, we didn't have a rehearsal and Sabrina was able to adjust the timing of the songs seamlessly throughout the ceremony. Sabrina is also flexible and great at communicating. We were able to talk through FaceTime, email, and text. Sabrina added a unique and intimate touch to our wedding and we would highly recommend her!

Thank you so much for this, Kia. It was such a joy to serve you and your husband. All good wishes for your life together!

Sabrina's music was beautiful and she was a pleasure to work with. Having a harpist was the perfect touch for our event.

Thank you so much, Robin--it was likewise a great pleasure to provide the music for this lovely dinner event!

Thank you Crystal. It was a lovely event and I hope you'll have me back again sometime.

a joy to have Sabrina share her gift of music and faith!

What a delight it was to have Sabrina come share her musicial talent and her spirit with us at West Street. She communicated clearly and completely, ahead of our worship service. She arrived in plenty of time to set up and be prepared. She is a talented harpist, and was willing to respond to questions and interest after the worship hour.
We had several people say they would love to have her play every Christmas season!

It was truly a joy to provide harp music during your Advent worship service yesterday. It was so fitting to have the harp join the bells, singing, and other instruments the Psalms call upon us to employ in praise and thanks to God! You are a pleasure to work with and your congregation is so warm and welcoming and Spirit-filled! I would be delighted to return again. Thank you!

Sabrina was a wonderful harpist - very professional but also very personable. I had her play for my birthday luncheon in a lovely tea room on the southside of Indianapolis. She was punctual and very flexible regarding the itinerary I had planned for the afternoon. All of my friends in attendance (around 25) complimented her playing and were so excited that I had a harpist - she made the event extra special and memorable! I would not hesitate to recommend her and hope that I can plan another "event" soon just so I can hire her to play!!!

Deborah, thank you so much for your very kind review. It was such a great pleasure to serve you and your guests on this wonderful occasion of your birthday. I'm so grateful to have been there to witness and participate in an event filled with so much beauty, joy, and love! Please do contact me again in the future!

Funeral service for my mother....delivered everything as promised...on time, selection of songs, etc. very satisfied!

I am so happy to have found this site before my event. Being able to have Sabrina play at the event added a very special touch. She was very professional and played beautifully.

Thanks so much, Chelsea. It was a beautiful event and I was so thankful to be a part of it!

Sabrina Sigal Falls plays the Celtic harp as a ministry of healing, worship, and celebration. She shares her gift of harp music in hope of touching hearts with a deep sense of God’s presence and the blessing of God’s love and grace. Whether playing in a worship service, at a wedding, a memorial, or at bedside, Sabrina plays her harp to bring beauty, joy, hope, and peace to those who hear it.

With piano as her first instrument, Sabrina began to play the harp in 1985, at the age of 28. She fell in love with traditional Celtic music in her college days and listened to it every chance she got ever since. During a sad time in her life, just after the loss of her father who had suffered from cancer, she discovered the harp, which lifted her out of her grief and a deep depression. She believes that the Holy Spirit whispered the idea of playing the harp into her heart during a time of worship. Although she knew nothing about harps or how to even begin playing one or finding one, doors opened one after the other as soon as she said “Yes” to God’s leading to play it, and soon she had her own harp and was on her way! Although she only thought she would play for herself and family and close friends, more and more requests for her playing would come, and she began to play often in public. In the years since she has played her harp in many worship services, weddings, retreats, and memorial services. She has also played for special celebrations, receptions, concerts, and programs for senior communities, with a repertoire of traditional folk music, hymns and spirituals, popular and classical tunes.

As a Certified Music Practitioner (CMP), Sabrina provides live therapeutic music for those who are sick and for those in transition from life to death. Having received her training and certification from the Music for Healing and Transition Program, which is accredited by the National Standards Board for Therapeutic Musicians, she serves as a CMP in several hospitals in Indianapolis.
A graduate of the Earlham School of Religion, with a Masters of Divinity degree, Sabrina is a recorded minister in the Religious Society of Friends and has served as a pastor and hospital chaplain. She lives in Indianapolis, Indiana with her husband David, and dog Luka, and delights in her grandchildren who live nearby!