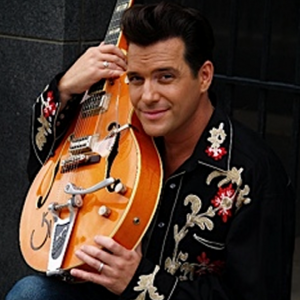 Really enjoyed the show- Took me back about 50 years.

Performed for about 300 age 50+ folks at a picnic. Excellent reviews by the attendees. I would have given them 5 stars, but they left a mess of bottles and trash that event volunteers had to clean up.

Great group, very professional. They were hired for an outdoor event at Mears Park, The audience, primarily folks 50+, enjoyed the selections.

Robby Vee Canadian Rockabilly Hall Of Fame Artist and "The Prince Of Twang"
is known for performing his unique style of roots music to audiences across the
globe. Having been on tour with the legends and architects of rock-n-roll, he has
learned from, and shared credits and stages with the best, from James Burton
to Carl Perkins, Albert Lee, Little Richard, the Everly Brothers, Sir Paul
McCartney, Eric Clapton, Dion, The Righteous Brothers, Buddy Holly’s
Crickets, Dick Clark and his ‘Caravan of Stars Rock ‘N’ Roll Show’, his
father, 60’s pop rocker Bobby Vee and many more. Robby is known for
combining elements of his vast repertoire telling stories that bridge the
generation gap from the “roots of Rockabilly to the new sounds of Americana
music of today”. As an entertainer with 6 studio records to his name, countless
guest artist credits, and a history of extensive touring, Vee has captured the
attention of audiences and respected industry professionals both Nationally and
Internationally. Claude Hall, radio-TV editor of Billboard magazine writes, “If this
guy had been around during the era of Elvis, he would have given Elvis a run for
his money."

“This cat sure can play.” –Carl Perkins
“Robby’s a true guitar slinger!”
–Ronnie Wood of the Rolling Stones
“Writings confident and inspired.”
-Marshall Crenshaw
“These guys could play on any stage.”
-Sir Paul McCartney
“This is the same stuff I used to make my records with... Straight from the
hip.” –Dion

Robby Vee is currently touring to audiences worldwide playing fairs, festivals,
theatres and casinos with his "Rockabilly and Roll Show" featuring a constant
changing cast of rockers and top collaborations with artists who are known for
keeping this special brand of music alive and rockin'!