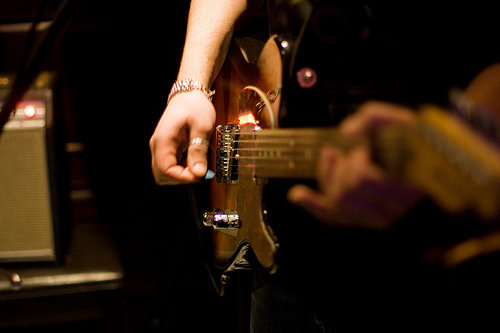 As one of the founding members of Wheat, Ricky recorded three internationally released albums, toured the US & Europe numerous times, and performed on national TV shows such as NBC's Late Night with Conan O'Brien and Last Call with Carson Daly. Wheat also contributed to soundtracks for a number of television and film soundtracks, including Cameron Crowe's 'Elizabethtown'.

Ricky has also played with a number of acclaimed local cover bands, such as The Freeze Pops, View From Here, The Dots, Headspace, Heat, and Reminisce.

Be the first to review Ricky Brennan Jr.

With nearly years of professional experience, Ricky is a seasoned entertainer with a unique ability to adapt his song selections to suit the crowd and venue. Known for taking odd requests on the fly, audiences can expect to be impressed and pleasantly surprised by his versatility and repertoire.

Ricky was one of the founding members of internationally acclaimed band Wheat, from 1996-2004. He contributed to Wheat's first three albums, 'Medeiros' (Sugar Free 1997), 'Hope and Adams' (Sugar Free/City Slang 1999), and 'Per Second, Per Second .. Every Second' (Aware/Columbia 2003). His tenure with the band included numerous tours across the US, Europe and Canada, and national TV appearances including NBC's Late Night with Conan O'Brien and Last Call with Carson Daly.
Ricky also had a band called Duresse, who self-released a 7 song EP 'Elate' in 2005.

As a songwriter, Ricky has contributed to songs featured in major films and tv shows, including Cameron Crowe's 'Elizabethtown'.

Over the years, Ricky has also bounced around with various Boston-area cover bands, including the Freeze Pops, The View From Here, The Dots, Reminisce, HeadSpace, and Heat.

Currently you can find him performing solo around the Greater Boston & South Shore areas on a regular basis, and occasionally filling in on bass with the Freeze Pops.